Accessibility links
The Beauty Of Spilling Your Sad Teenage Guts A new memoir called Notes To Boys finds writer Pam Ribon digging through the real letters she wrote to real boys and finding some funny, sweet, strange truths about being young and wonderfully dumb.

The Beauty Of Spilling Your Sad Teenage Guts

The Beauty Of Spilling Your Sad Teenage Guts 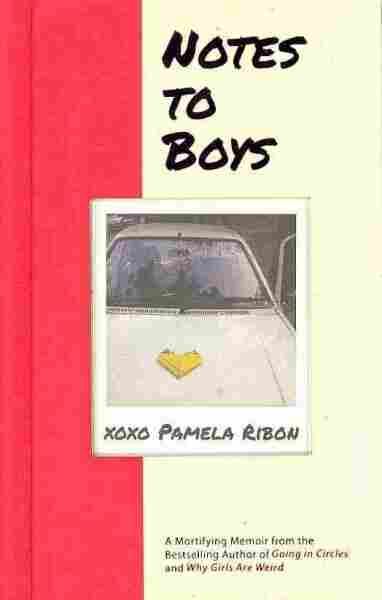 And Other Things I Shouldn't Share in Public: A Mortifying Memoir

Title
Notes to Boys
Subtitle
And Other Things I Shouldn't Share in Public: A Mortifying Memoir
Author
Pamela Ribon

I read Pam Ribon's Notes To Boys: And Other Things I Shouldn't Share In Public in a few sittings, but the longest stretch I consumed where one should ideally read this book: in a bubble bath. The calming atmosphere is good for the anxiety that comes from seeing a woman excavate her teenage brain, the vulnerability builds the empathy it takes to understand how terrified all these boys she was writing to must have felt, and if you get too mortified for her, you can always elect to go down the drain with the bathwater just to escape.

Pam has written several novels, has written for television, and – like me – made her bones early on in part by recapping television, perhaps most famously The Gilmore Girls.* She was an early popular online diarist, which is what we called people before "blogger," and now she has dug out reams of letters she wrote to boys when she was a teenager and has published them.

"It's not hoarding if it's research," she writes.

There's nothing new about turning your own humiliations into material. The mortifying story about yourself is as much of a staple in comedy as the overbearing spouse. But there is something about Notes To Boys that is so bracing and genuine in its presentation of the Girl With Oversized Feelings that, perhaps in part because I was such a girl myself, it's physically uncomfortable to read in places. Pam talks about this in the book, explaining that she's shared these letters with enough people to know that "every face is a little bit different in its severity, but it's a clearly recognizable expression of horrified sympathy."

What Notes To Boys gets right about teenage humiliation that so many books and films get wrong is that the most humiliating moments of youth are often not the encounters with bullies or the fallings-down in public. They are the earnest self-immolations that come from truly and deeply felt emotions that, communicated to anyone else, suddenly become as conspicuous and isolating – and as painful to recall – as a contagious rash.

It's often not the malice of others that will really get you; it's your own big, beating heart, which is often translating itself in the language of the music you're listening to, the movies you're seeing, and the books you're reading. You know words, but they're just words, which is why Notes To Boys undoubtedly sets a record for the number of times some spelling or other of the word "ecstasy" is followed by "[sic]."

At times, there is an unmistakable note of menace, or at least genuine unease, in these stories. Grown-up Pam engages in a dialogue with the writer she calls "Little Pam," annotating found letters with later reflections. When Little Pam writes about a boy touching her thigh under her skirt on the school bus, Grown-up Pam wonders why Little Pam ran home and breathlessly romanticized what seems, to an adult eye, like a pretty gross imposition.

But Little Pam didn't see it that way. As she writes about this encounter, she lets her mind wander: "What is a soul, anyway?" (Little Pam writes about souls a lot. A really lot.)

And certainly, later in the book, there are more serious unsettling experiences as Little Pam settles herself into boys and sex, and a very real sense that Little Pam was, no kidding, pretty unhappy sometimes.

But much of the time, Little Pam's wails of drama and Grown-up Pam's head-smacking amazement at her ability to, for instance, babble on passionately about sex when she had never had any, are just brain-breakingly funny – it's the humor of empathy, of the most empathy, for Little Pam and her tormented, romantic heart. Little Pam wrote fiction, too: I almost cannot bear to tell you that she wrote a piece of what amounts to auto-fanfiction in which she, herself, Little Pam, met Johnny Depp. But she did.

And she wrote some ... well, she calls it awkwardica. You can perhaps figure out what that is.

The easiest way to sell Notes To Boys is for the hugely relatable, very entertaining back-and-forth between the Little and Grown-up Pams, which is essentially the sum of all of our inner dialogues when we ponder the most embarrassing, awful things we've ever done.

But what makes the book so good is that Grown-up Pam has enormous affection for Little Pam, who is, like a little sister, horribly embarrassing on the one hand and a fiercely protected loved one on the other. It's a collection of embarrassing stories and mortifying notes, yes, but it's also a pretty deeply felt memoir about her introduction to boys and sex and – perhaps most painfully – learning when not to tell people how you feel.

The first step in coming to terms with having had an embarrassing youth, perhaps, is getting distance from it enough to laugh about it. But the second step is this step, the step where you can see that kid, with all of her big, clumsy, unwieldy, foolish feelings slopping out of her like coffee out of a too-full cup, and you can kind of love her for it.

*Because we once worked for the same outlet, Pam and I know each other a little – well enough to have shared a restaurant sighting of Amy Poehler, but not well enough that I'd feel any obligation to like the book.