Accessibility links
Getting 'Dallas Buyers Club' Made Took Tenacity And 'Will' The Oscar-nominated film tells the story of Ron Woodroof, an AIDS patient who fought the system to get what he needed to survive. But screenwriters Melisa Wallack and Craig Borten had to fight to get the movie to the big screen, with Borten turning to alcohol and drugs along the way. 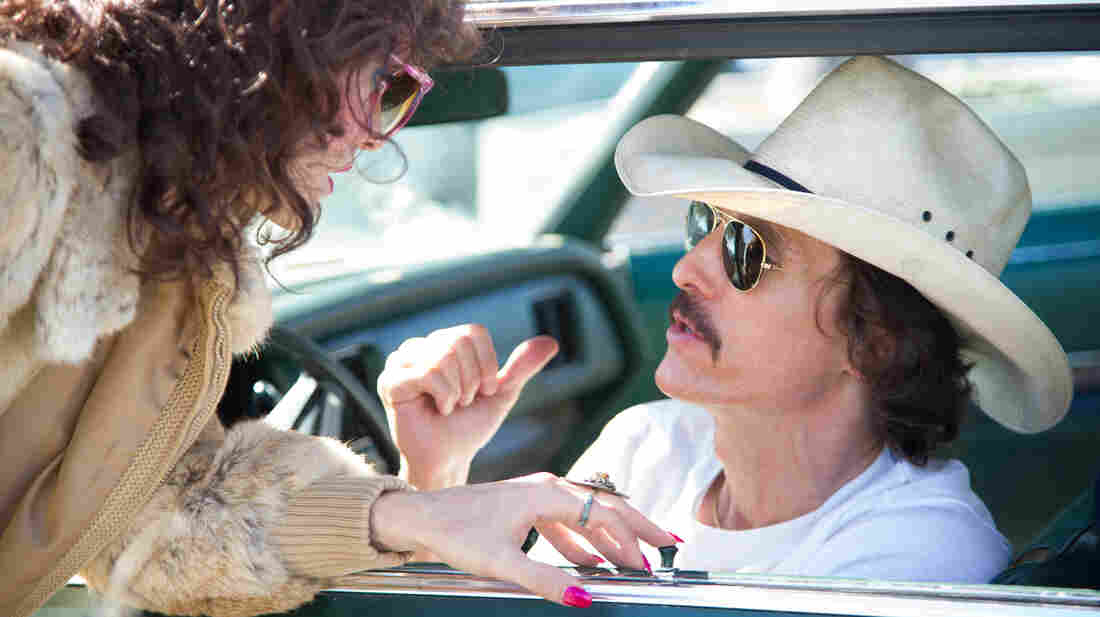 They appear remarkably unscarred for a couple of writers who survived a punishing Hollywood battle. Craig Borten is tall, with deep-set eyes. Melisa Wallack is tiny and neat, in a perfectly fitting black sweater. They're lounging in a creamily upholstered room in a top Los Angeles talent agency, as Borten dryly explains how he might have pitched their movie Dallas Buyers Club to a studio executive.

"Oh, well, it's about this heterosexual, homophobic, white-trash, urban, racist, cowboy who gets AIDS, who befriends this transgendered person, and they both die in the end," he says.

Dallas Buyers Club is based on a real person. Borten learned about Ron Woodroof in the early 1990s when an ex-girlfriend mailed him a newspaper clipping about Woodroof and buyers clubs. Those were the gray-market groups providing HIV medications to people who needed them during the height of the AIDS crisis, when activists felt the Food and Drug Administration was letting them down. Then in his 20s, Borten drove from New York to Texas to interview Woodroof — for three days — about starting a buyers club in Dallas. He wrote a script, and sold it in 1996.

"There was Dennis Hopper to direct, Woody Harrelson to star," he recalled.

But the company that bought the script went bankrupt. Borten teamed up with Melisa Wallack, and the next year, they sold a new script to Universal, with Brad Pitt to star and Marc Forster to direct, the latter then hot off the indie hit Monsters Ball.

But Forster and Pitt ended up making World War Z instead. (Later, Ryan Gosling and director Craig Gillespie would sign on but the financing fell apart.) Universal decided the script was not ready. It languished in what's called "development hell" for nearly a decade. Hollywood screenwriters learn to detach, but Borten says losing Dallas Buyers Club was like "a death blow." He lost himself in a vortex of alcohol and drugs.

"It was everything," he said ruefully. "Everything. Just think of everything. That's what I wanted. The whole rainbow of substances."

"Yup," Wallack agreed. For her, she said, one of the darkest moments in the story behind Dallas Buyers Club came when she had to peel her fellow screenwriter off the floor. Borten said he remembers little from that time except for ending up in a state-run rehab facility.

"Ninety-five percent of the guys were coming straight out of prison or jail in jumpsuits," he recalled. "And my roommate had a swastika, and he had just done 11 years for manslaughter. And I grew up there. I was there for seven months."

Right when Borten entered rehab, the writers managed to retrieve the rights to their Dallas Buyers Club script, thanks to a clause in their Writers Guild contract.

"It went dormant during my dark days and then came to life during my light days," Borten joked. "I'm sure that's just my perspective."

In 2009, thanks to Robbie Brenner, a producer who had been involved with the project nearly from the beginning, Matthew McConaughey got involved. Movies such as Killer Joe, Mud and Magic Mike hadn't yet transformed the actor's career, and he was still generally thought of as a frequently shirtless, bongo-playing bro with a certain stoned likability.

"He's the one who got it made," Wallack says firmly. "It was his commitment to losing the weight."

McConaughey shed more than 40 pounds — a quarter of his body weight — to play a man slowly dying of AIDS, even before there was money to make the film. All of the publicity around his weight loss on talk shows and in magazines lent Dallas Buyers Club an air of inevitability and may even have helped with a new round of financing. But just 10 weeks before filming, the investors backed out. Producer Rachel Winter was feeding the crew, which had arrived in New Orleans for preproduction, with her personal credit cards.

The epic deal-making behind Dallas Buyers Club is not particularly unusual. But in this case, Brenner sees the tenacity of everyone involved as a tribute to someone who fought the health care system to get what he needed to survive.