Accessibility links
College Applicants Sweat The SATs. Perhaps They Shouldn't Many students who don't ace the SAT and ACT tests apply to schools that make standardized test scores optional. A new study shows those students do just as well in college as those who submit their scores. 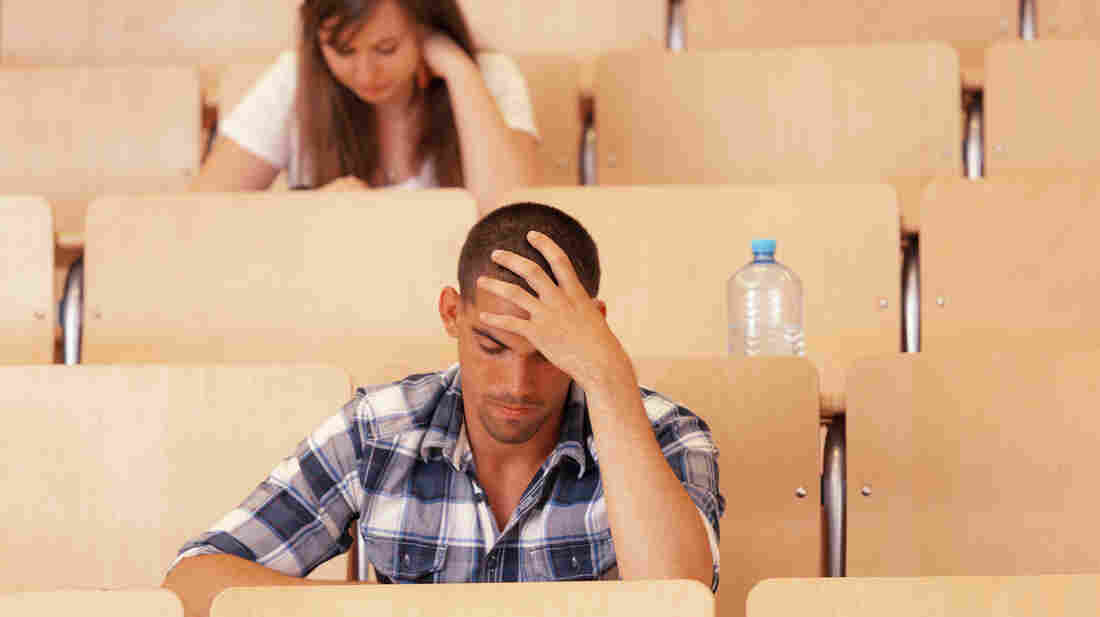 Standardized tests are an important consideration for admissions at many colleges and universities. But one new study shows that high school performance, not standardized test scores, is a better predictor of how students do in college. Amriphoto/iStockphoto hide caption 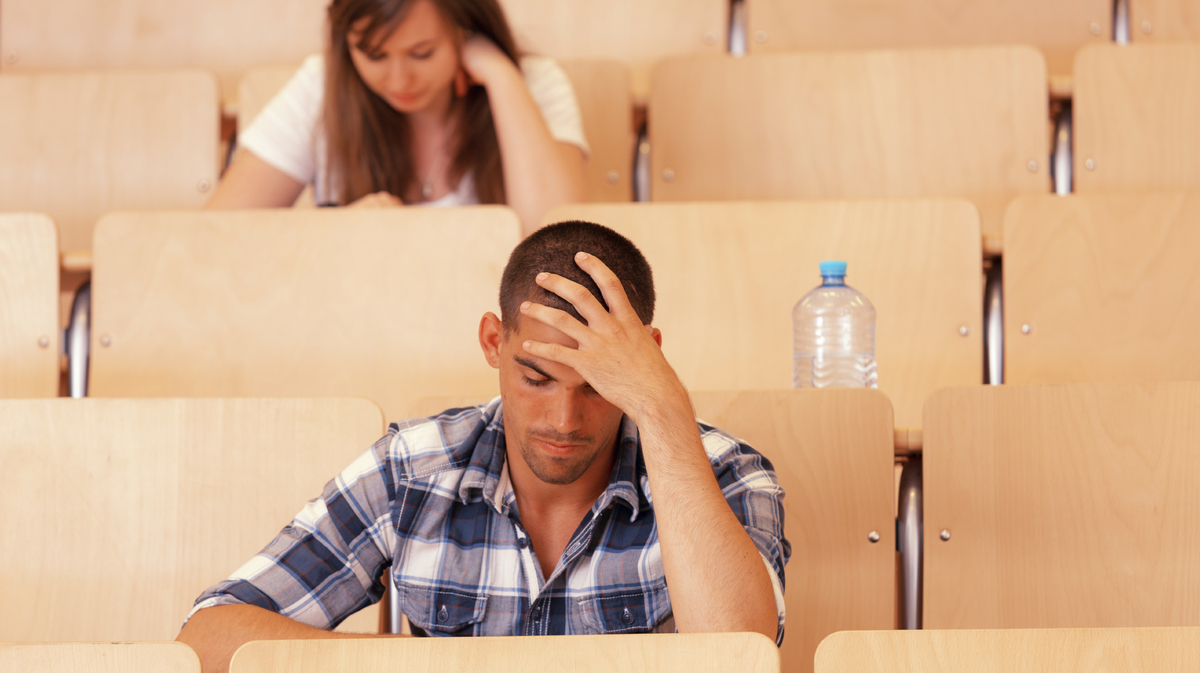 Standardized tests are an important consideration for admissions at many colleges and universities. But one new study shows that high school performance, not standardized test scores, is a better predictor of how students do in college.

With spring fast approaching, many American high school seniors are now waiting anxiously to hear whether they got into the college or university of their choice. For many students, their scores on the SAT or the ACT will play a big role in where they get in.

That's because those standardized tests remain a central part in determining which students get accepted at many schools. But a first-of-its-kind study obtained by NPR raises questions about whether those tests are becoming obsolete.

On a drizzly Saturday in Belmont, Calif., high school students are walking out of the Belmont Library looking a little frazzled. They've just spent four hours communing with paper, chair and pencil.

Mara Meijer, a junior who wants to be a veterinarian, is among them.

"A lot of my teachers have said that if you don't have these scores, [colleges] won't even look at your applications," Meijer says. "I have tons of books at home that I practice over the weekend and after school, so I can work on upping my score."

"Upping my score" is a mantra for teens across the country. But Meijer questions — as do a growing number of students and parents — why America remains addicted to these standardized tests in the first place.

"They're not exactly a fair way to show our skills," she says. "I wish they could find some way to really show what we can do."

This study will be a first step in examining what happens when you admit tens of thousands of students without looking at their SAT scores. And the answer is, if they have good high school grades, they are almost certainly going to be fine.

Today, some 800 of the roughly 3,000 four-year colleges and universities in America make SAT or ACT submissions optional. But before a new study released Tuesday, no one had taken a hard, broad look at just how students who take advantage of "test-optional" policies are doing: how, for example, their grades and graduation rates stack up next to their counterparts who submitted their test results to admissions offices.

"Human intelligence is so multifaceted, so complex, so varied, that no standardized testing system can be expected to capture it," says William Hiss, the study's main author. Hiss is the former dean of admissions at Bates College in Lewiston, Maine — one of the nation's first test-optional schools — and has been conducting similar research for a number of years.

"My hope is that this study will be a first step in examining what happens when you admit tens of thousands of students without looking at their SAT scores," Hiss says. "And the answer is, if they have good high school grades, they're almost certainly going to be fine."

Hiss found that there was virtually no difference in grades and graduation rates between test "submitters" and "nonsubmitters." Just 0.05 percent of a GPA point separated the students who submitted their scores to admissions offices and those who did not. And college graduation rates for "nonsubmitters" were just 0.6 percent lower than those students who submitted their test scores.

(The six public universities included in the study are de facto test-optional; these schools collect scores but generally do not use them to determine admission unless a student's rank or high school grade point average is below a given threshold.

(Sixty-three percent of all enrollees at the public universities included in the study were admitted without testing taken into account. The study excludes or controlled for one subset of those students: The 35 percent of those applicants who tested above their institution's average scores. Those students would likely have been admitted, Hiss says, if their test scores were considered. Twenty-eight of the public school students included in the study had below-average scores and were admitted by their school's automatic admissions policy.)

"By any statistical methodology [these are] completely trivial differences," Hiss explains. "The nonsubmitters are doing fine in terms of their graduation rates and GPAs, and significantly outperforming their standardized testing." 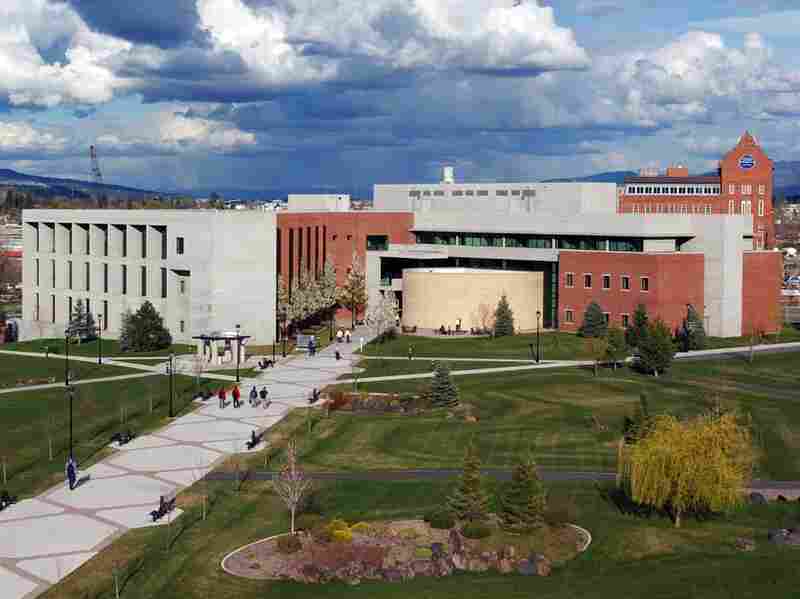 The campus of Washington State University, Spokane. WSU, which has its main campus in Pullman, Wash., is one of 800 colleges and universities that have "test-optional" admissions policies. Peter G. Williams/AP hide caption 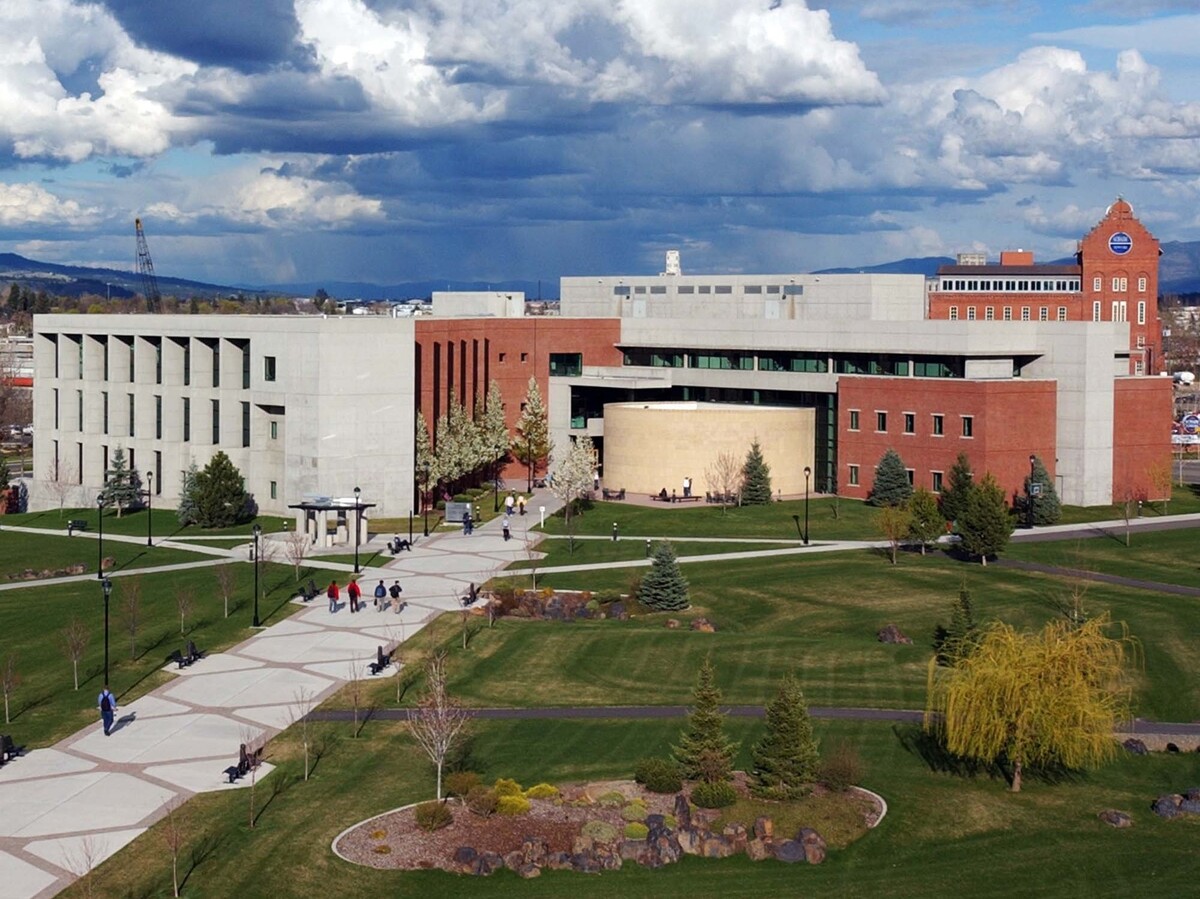 The campus of Washington State University, Spokane. WSU, which has its main campus in Pullman, Wash., is one of 800 colleges and universities that have "test-optional" admissions policies.

In other words, those students actually performed better in college than their SAT and ACT stores might lead an admissions officer to expect.

The study has another clear result: High school grades matter — a lot. For both those students who submitted their test results to their colleges and those who did not, high school grades were the best predictor of a student's success in college. And kids who had low or modest test scores, but good high school grades, did better in college than those with good scores but modest grades.

Hiss says it's probably not so surprising that a pattern of hard work, discipline and curiosity in high school shows up "as highly predictive, in contrast to what they do in three or four hours on a particular Saturday morning in a testing room."

Some are calling this study a potential game-changer that may prompt schools to evaluate whether there is value in requiring standardized tests. Before now, data on outcomes for test-optional programs were almost always school-specific or largely anecdotal, says Robert Schaeffer, public education director of the advocacy group FairTest, a longtime critic of standardized testing.

"Now we have a study that covers 123,000 students at 33 institutions over eight years. And the conclusion: that test-optional admissions improves diversity [and] does not undermine academic quality," Schaeffer says. "Now more [colleges] and universities will have the data they need to support dropping ACT and SAT requirements."

So just how did the U.S. come to rely so much on standardized test scores? The SAT grew out of an Army IQ test that got the attention of presidents at two prestigious Ivy League schools. In the late 1930s the SAT became a scholarship test for all of the Ivies.

After World War II, Hiss says, most every school followed the Ivies with good intentions: to try to "open up access to colleges and universities, and to allow young people coming out of unfancy social backgrounds to be noticed."

A big test, the theory went, would allow more "diamond in the rough" students to be found and accepted to top schools, regardless of family connections or money.

But Hiss argues that what started as a single tool became an overused pillar of admissions policies.

"The scores, while they still certainly can help spot a highly talented person coming out of a different sort of a background ... serve more to truncate access than to open it," he says.

John Fraire, vice president for student affairs and enrollment at Washington State University in Pullman, Wash., agrees. WSU is one of the large test-optional public universities that took part in the study. Fraire believes that standardized tests are artificially narrowing the pool of students applying to some colleges. Students who do badly on tests, he says, may not even bother to apply.

"In some ways, it's discouraging students who have great potential for success [from applying to] a particular school," he says. "Most of our students [at WSU] aren't from privileged backgrounds. They're from the rural communities, the inner-city Latino community, African-American community. And that's why I think this study is so important."

The private test preparation market for the SAT and the ACT is a $2 billion-a-year industry in the U.S. Critics of the tests have long said the exams better reflect a family's income and a student's speed at test-taking than aptitude, competency or intelligence.

But officials at the College Board, which administers and manages the SAT, say the test is always evolving. James Montoya, the College Board's vice president for higher education, says he's heartened by the study's conclusion that high school grades matter a lot in determining college success. And he points to a previous study that showed SAT scores, when combined with grades, proved a strong predictor of first-year college success across economic groups.

"The information in this study, of course, is valuable. But I also think it needs to be put into context in relationship to the many thousands of colleges and universities who find that the SAT is an extremely useful tool in the admissions process," Montoya says.

Wayne Camara, ACT's senior vice president of research, doesn't dispute the study's results but adds that "more information is always better in admissions decisions. ... Another reason why tests are also important is to ensure that grade inflation is held at bay."

The report may end up adding to the current public policy debate in Washington, D.C. There's a renewed push, led by President Obama, to expand the college pool — especially by getting more low-income and minority students into college, as well as more young people who will be the first generation in their family to attend. The study shows that test nonsubmitters are more likely to be precisely those students.

The study's authors believe test-optional policies can help students from all backgrounds. Evy Borkan, 20, of Portland, Ore., says she benefited from a test-optional admissions policy. She was a strong student in high school, but she didn't have great SAT scores.

"I did well in my classes in high school. I worked hard in them, and I felt really comfortable with sending in my GPA," she says.

Borkan was drawn to Pitzer College, a liberal arts school near Los Angeles. She liked the feel of the place and its academic offerings — and another big factor, she says, was that submitting SAT scores was optional.

"I just liked the fact that they were putting into question the merit [that] SAT scores can hold on a college application, and that just made me feel more comfortable," she says.

Now a Pitzer sophomore, Borkan is doing very well. The "test-optional" kids, it seems, are more than all right; this study shows that they're thriving.

An earlier Web version of this story incorrectly identified the report as a Bates College study. The study's principal investigator, William Hiss, is a former dean of admissions and vice president at Bates, but the college did not sponsor the study.