Accessibility links
With Humor And A Nod To History, Fallon Takes Over 'The Tonight Show' On Monday night, Jimmy Fallon paid homage to 60 years of Tonight Show history while claiming his own place in line. "I just want to do the best I can and take care of the show for a while," he said. "If you guys let me stick around long enough maybe I'll get the hang of it." 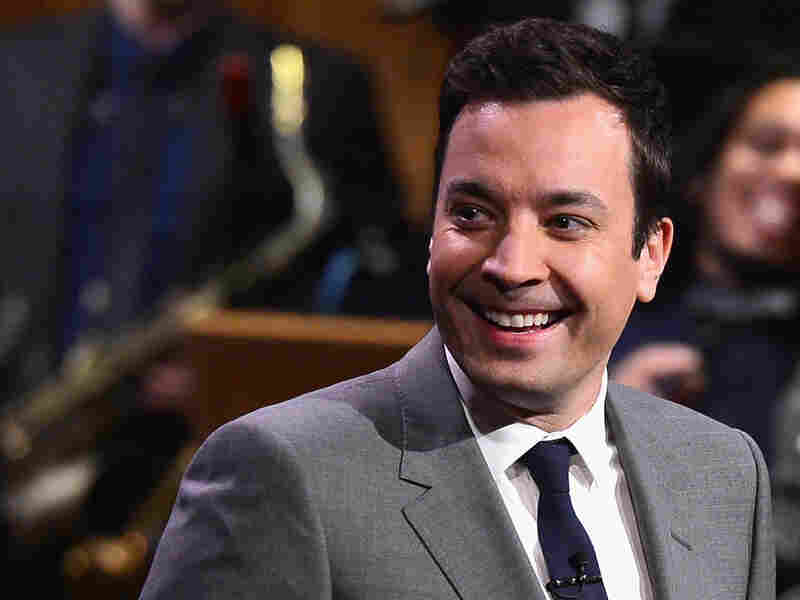 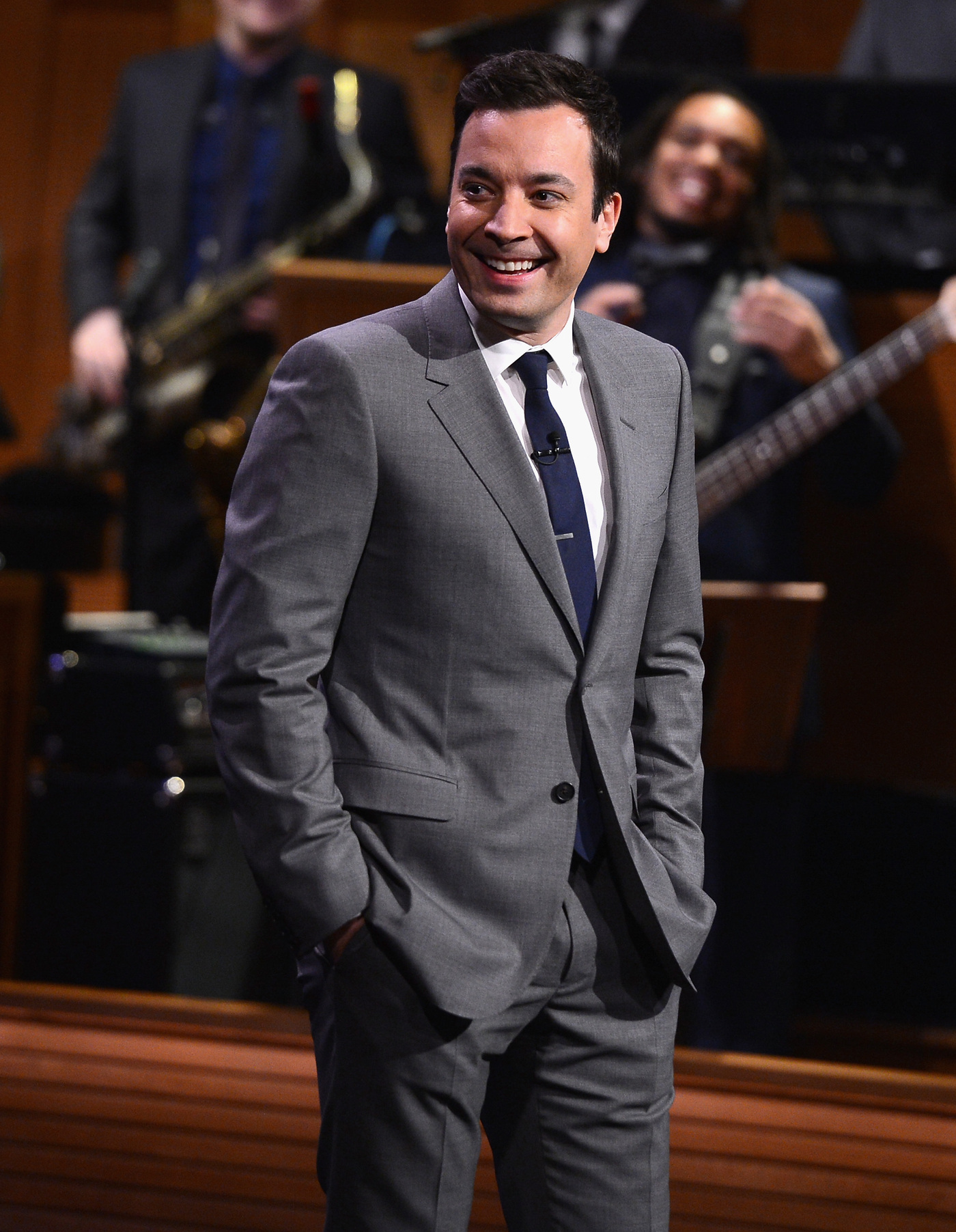 Jimmy Fallon took over as host of The Tonight Show on Monday. "I hope I do well," he told the audience. "I hope that you enjoy this."

Opening nights of new incarnations of late-night TV talk shows are good, mostly, for first impressions — or, in the case of Jay Leno, sometimes a second impression. It's not fair to make strong judgments on the content alone, because a first show always is top-heavy with ideas, special guests and nervousness. But it is fair game to judge the set, the environment, the overall mood, and how well the host fits into the history of late-night television.

Jimmy Fallon, at age 39, fits into it very well. For one thing, he knows the history. He also appreciates it ... and even is able to make fun of it, without saying anything too caustic.

"This is the first Tonight Show broadcast from New York in over 40 years," he told the crowd. "... I'm Jimmy Fallon and I'll be your host — for now. Of course I wouldn't be here tonight if it weren't for the previous Tonight Show hosts, so I want to say thank you to Steve Allen, Johnny Carson, Jay Leno, Conan O'Brien — and Jay Leno."

But it's a new stage with lots of old ghosts. Jack Paar, the second host of The Tonight Show, performed his shows from the same Studio 6-B at Rockefeller Center's 30 Rock. And Johnny Carson did too, for the first 10 years of his reign, until he moved his show West in 1972. And now, it's back.

I just want to do the best I can and take care of the show for a while. If you guys let me stick around long enough maybe I'll get the hang of it.

"This is a moment in TV history, right here," Fallon told the audience. " ... I remember being a kid ... and asking my parents, Can I stay up to watch Johnny Carson? ... It means a lot to me. I hope I do well. I hope that you enjoy this. I just want to do the best I can and take care of the show for a while. If you guys let me stick around long enough maybe I'll get the hang of it."

The ascension of Jimmy Fallon to The Tonight Show desk, and the show's relocation to New York, are two important elements of this new 2014 version of The Tonight Show. Another is that the producer taking control of the show and the time slot, beginning last night, is Lorne Michaels, who already pulls the strings at Saturday Night Live and at Late Night, which returns next week with its new host, former SNL "Weekend Update" anchor Seth Meyers. That gives Michaels control of about a dozen TV hours a week, which makes him a producer it's hard to say no to. If there's a late-night booking war ahead, don't expect Michaels to lose.

On last night's opening show alone, the featured guests were Will Smith and U2, but there were enough cameos to make it feel like an event called "Celebrities on Parade." Seated at his desk after his opening monologue, Fallon joked that one of his buddies, who bet that Jimmy would never host The Tonight Show, owed him $100. To the delight of the crowd, Robert De Niro came out unannounced from behind the curtain, slammed a $100 bill down on Fallon's desk, then exited without saying a word. After that, doing the same thing in rapid succession, so did Tina Fey, Joe Namath, and a string of others, from Mariah Carey, Joan Rivers, Seth Rogen, Sarah Jessica Parker, Mike Tyson and Lady Gaga. And then, as the capper, Stephen Colbert came out, with a bucketful of pennies which he poured all over Fallon, while taking a selfie and giving him an appropriate welcome for someone who's a new competitor in his Colbert Report time slot.

All Work, No Respect: Twice Pushed Out, Jay Leno Moves On From 'Tonight'

The first show moved quickly, and well enough. The interview with Will Smith was nothing special, but a pre-taped segment, in which he and Fallon performed a history of hip-hop dance, pointed to what is sure to become the key appeal of The Tonight Show Starring Jimmy Fallon: a lot of guests won't be coming just to talk with the host, or to plug a project. As when Fallon hosted Late Night, they'll show up just to play.

Another secret weapon of Fallon's, as it has been from the start, is his unbridled enthusiasm. When he introduced U2's first number, it wasn't just the group that excited him, but the location, too. And with good reason. Outdoors, atop Rockefeller Center, with sunset coloring the New York skyline, and U2 performing what may be the coolest rooftop concert since The Beatles filmed Let It Be, it was indeed, quite literally, a view from the top.

Which, based on first impressions, may be exactly where The Tonight Show Starring Jimmy Fallon belongs.