Accessibility links
On 'Tonight Show,' Jimmy Fallon Looks To Bridge Two Eras The SNL veteran and former Late Night host stepped up to the plate last night on The Tonight Show, where he's replacing longtime host Jay Leno. His challenge: to bring his younger fan base along without alienating Leno's crowd. 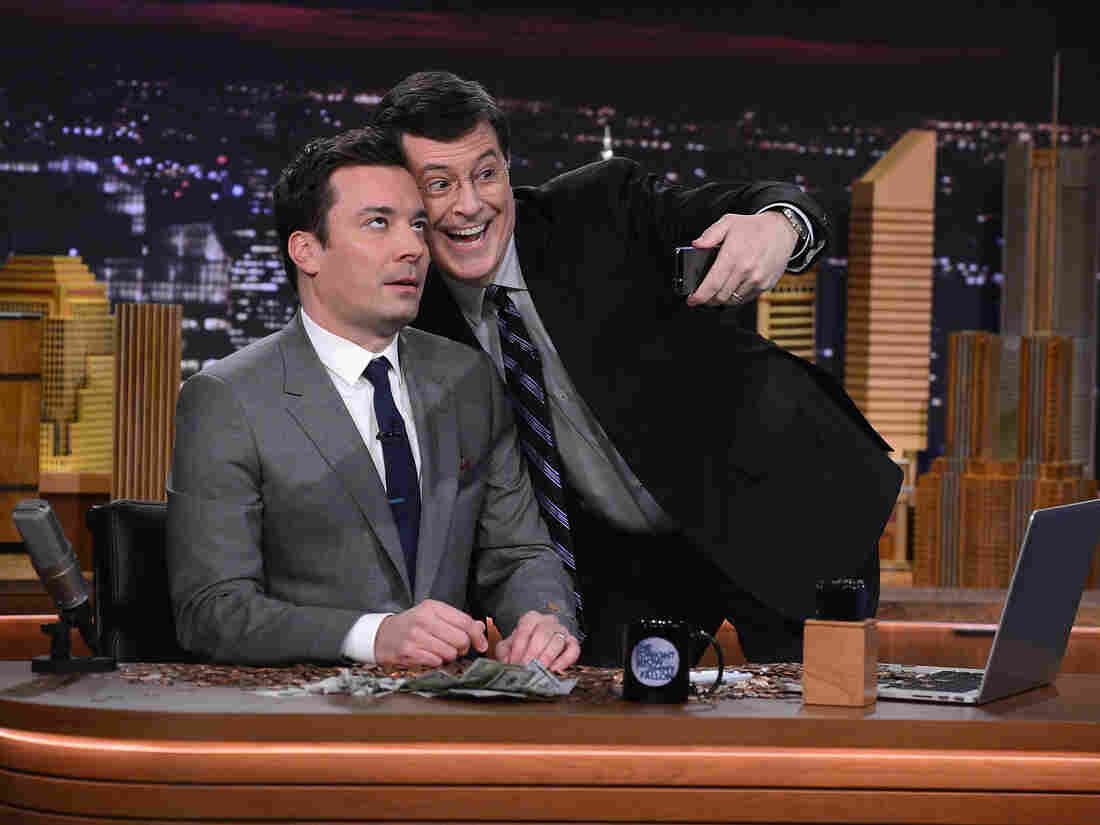 Stephen Colbert visits The Tonight Show for Jimmy Fallon's debut -- and pays up the $100 he bet that Fallon would never host it. Theo Wargo/Getty Images hide caption 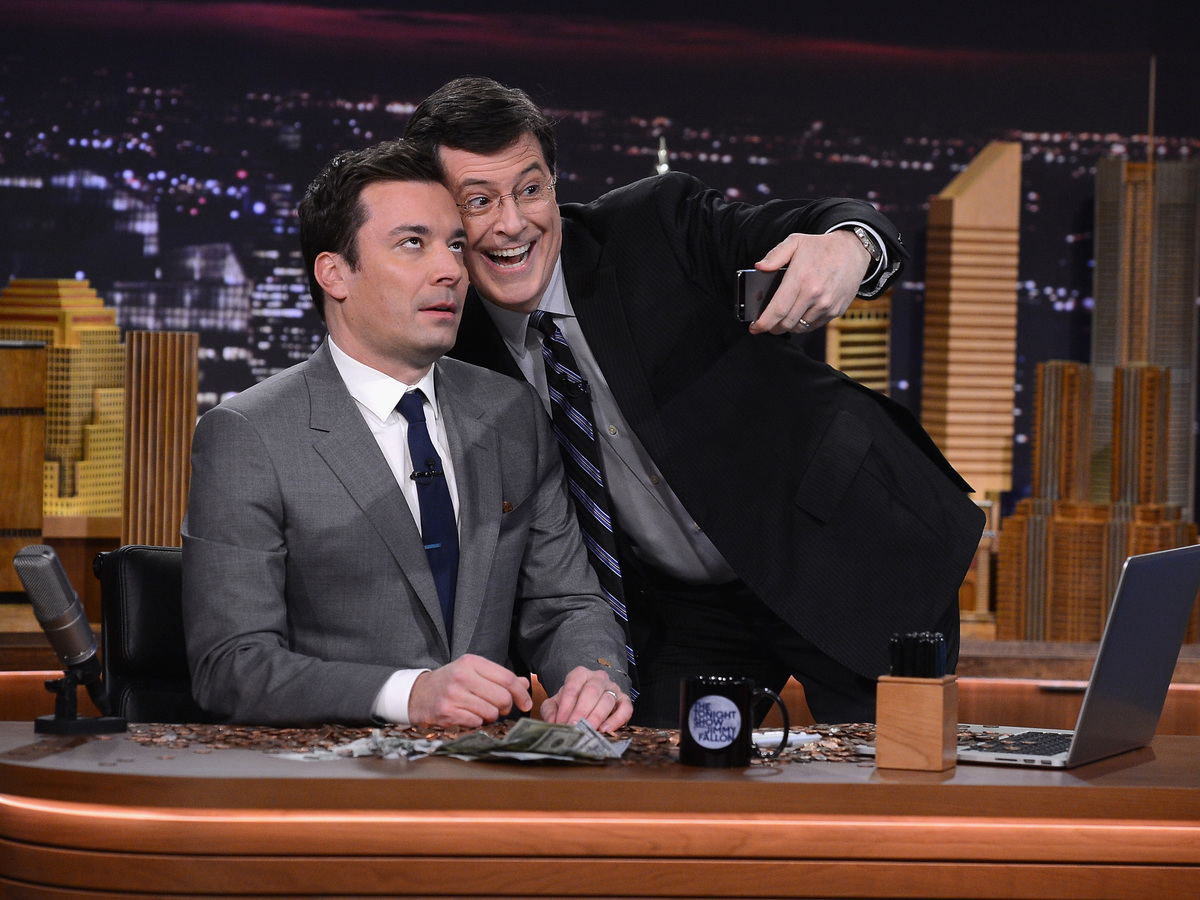 Stephen Colbert visits The Tonight Show for Jimmy Fallon's debut -- and pays up the $100 he bet that Fallon would never host it.

When Jimmy Fallon first stepped up to lead a late-night talk show in 2009, he looked like a teenager trying to drive his dad's Ferrari: a good kid who was out of his depth.

But little of that hesitation was evident on Monday night, when the 39-year-old comic finally took on the mantle that was promised him more than a year ago: host of NBC's most storied late-night franchise, The Tonight Show.

And how did the guy once known mostly for busting up Saturday Night Live skits with uncontrollable giggling wind up hosting the longest-running late-night show in TV history?

Fallon's first Tonight Show on Monday set about answering those questions in an almost methodical fashion, smoothed over by the host's irrepressible nice-guy energy. He spent long minutes explaining his personal history and the show's evolution, thanking Leno, introducing his parents in the audience. ("I wish I could have gotten you better seats," he cracked. "But it's a hot show.") And then there was his bow to his awesome house band, hip-hop's legendary crew The Roots.

Awkward as it sometimes seemed, the bit was also a primer for all the Leno viewers who may never have stayed up long enough to see the guy who once took over at 12:35 a.m. It also sent a not-so-subtle message that Fallon wasn't taking for granted that Leno's crowd would stick with him.

"There's going to be a kid out there, asking his parents to stay up late to watch me," said Fallon, a tremor in his voice, just after recalling how he'd asked his own parents to let him watch Johnny Carson and David Letterman. "That just means a lot to me. I hope I do well."

More On Jimmy Fallon and The Roots

All Work, No Respect: Twice Pushed Out, Jay Leno Moves On From 'Tonight'

With the sentimentality out of the way, Fallon jumped backstage again to restart the show, uncorking a few lame Olympics jokes before segueing into a bit where he name-checked an anonymous buddy who'd bet he would never become Tonight Show host — saying that pal owed him $100.

Imagine the crowd's surprise as Robert De Niro stepped onstage to fork over $100 — followed by Tina Fey, Joe Namath, Rudolph Giuliani, Mariah Carey (who pulled a C-note from her bra), a barely clothed Lady Gaga, Lindsay Lohan and many more celebrities. (Stephen Colbert, whose Colbert Report airs at the same time as The Tonight Show, outdid them all, dumping a bucketful of pennies on Fallon's head before shouting "Welcome to 11:30, bitch!")

Once again, this was a bit with a message: showing how much showbiz love there is out there for Fallon, and illustrating the range of celebrities the show will get, even though the operation has moved from Leno's Burbank, Calif., digs to New York City. It was also a little sigh of relief as Fallon's ascension finally closes the book on a troubled late-night transition that NBC has spent five years trying to get right.

Unlike Conan O'Brien, whose brief Tonight Show tenure only proved that his appeal is best-suited for the narrow confines of a cable channel, Fallon is considered the broadest comedy voice out there appealing to millennials — cool enough to create viral videos with The Roots, Justin Timberlake and Robin Thicke, but welcoming enough that 40- and 50-something Leno devotees need not feel excluded.

That vibe first surfaced Monday with a cool, pre-taped "Evolution of Hip-Hop Dancing" featuring inaugural guest Will Smith. Fallon and Smith offered a history of hip-hop dance, from the "Dougie" and "The Running Man" to "that leg thing no one can do" and a fit of twerking from Fallon that sent Smith stomping offstage in mock embarrassment.

Fun as that moment was, it also felt like a prime example of TV's odd approach to reflecting millennials' multicultural reality. There's lots of diversity, which nevertheless leaves little doubt about who is really the star of the show.

Indeed, part of Fallon's appeal is that despite his age, he lives the fantasy life of a millennial white guy; pals with Timberlake and Springsteen, while his geeky cool is validated by superhip black folks like Smith and The Roots.

Once upon a time, Arsenio Hall found talk-show success by giving exposure to actors and artists of color the Johnny Carsons of the world didn't know or value. Fallon's show has become network TV's answer to that challenge, boldly enlisting the best of rap and hip-hop culture to entertain a generation — across racial and ethnic lines — who grew up on the stuff.

Toss in a couple of typically masterful performances from U2 — including one from the top of Rockefeller Center with a commanding view of New York's skyline — and you have a pitch-perfect Tonight Show debut, which expertly walked the line between Fallon's former life as a late-night rabble-rouser and his new job as the face of a late-night institution.

Now all he has to do is pull it off again tonight.