Accessibility links
Kitchen Window: Once Exotic, Now Ubiquitous, Bananas Deserve A Bunch More Respect They're creamy, delicious, full of nutrients — and, as a crop, they have a complex history. But banana enthusiast Laura B. Weiss keeps it simple in her appreciation of America's No. 1 fruit, with sweet suggestions for breakfast and dessert. 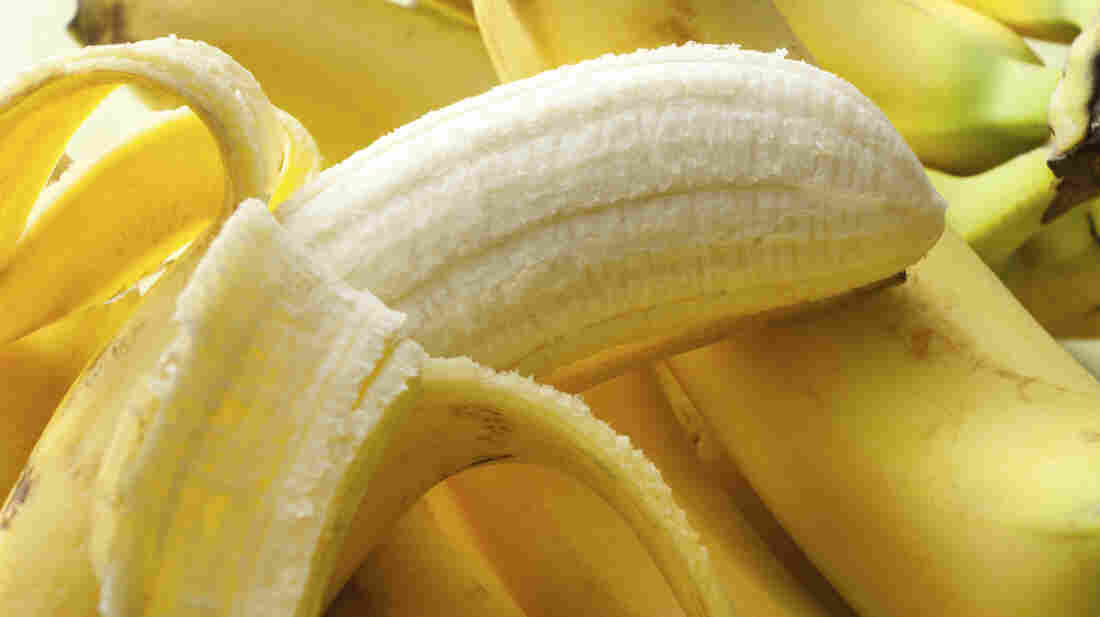 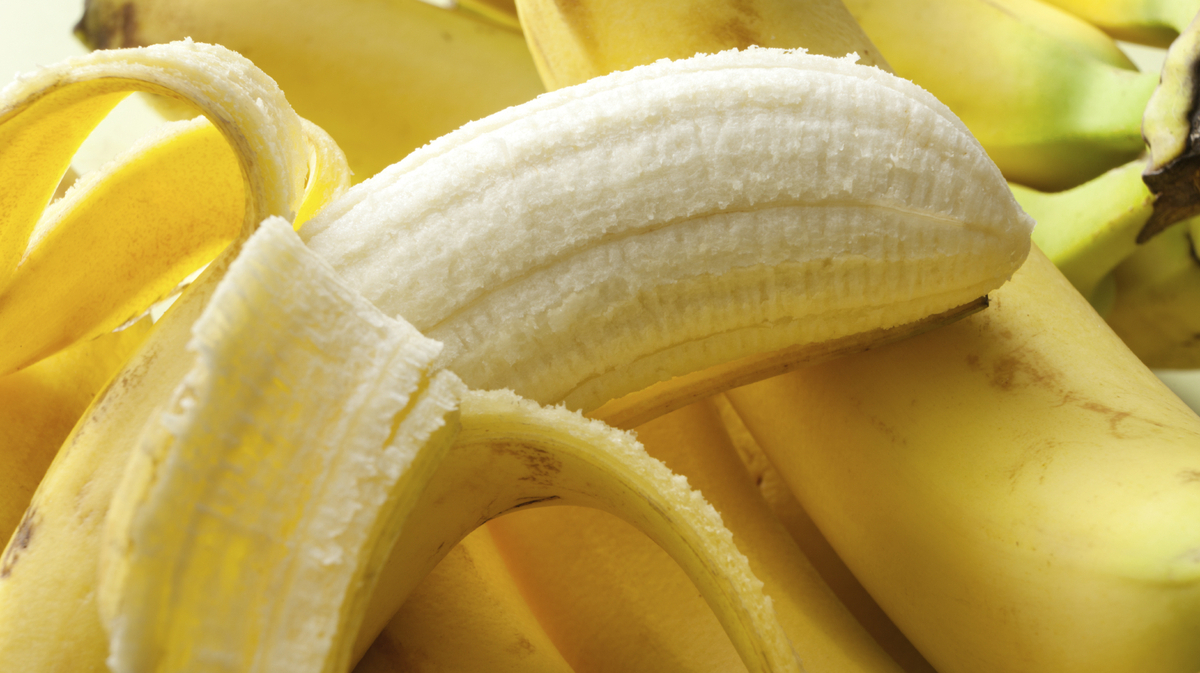 What's more American than apple pie? It's that familiar yellow-skinned fruit that, well, we all go bananas over.

Americans down more bananas than any other fruit — in fact, about 25 pounds a year, according to the Census Bureau. I'm among those legions of banana fans. In fact, I've been a die-hard banana enthusiast since childhood when, afflicted with food allergies, bananas were one of the few fruits I could eat. I still recall my mother standing by the stove, lapping sliced bananas in a pan with a simple but sublime sauce made from honey and butter. As the dish cooked, deeply fragrant caramel and floral notes wafted through our kitchen.

Although bananas are creamy, delicious and full of nutrients such as potassium and vitamin B6, the tropical fruit suffers from a persistent image problem.

"The banana is the McDonald's hamburger of fruit," says Dan Koeppel, author of Banana: The Fate of the Fruit That Changed the World. "It's cheap and it's ubiquitous."

Laura B. Weiss' work has appeared in numerous national publications, including The New York Times, Saveur, Travel + Leisure, and on the Food Network website. She's a contributor to Interior Design's blog and was an editor for the Zagat Long Island Restaurant Guide 2009-2011. Laura is the author of Ice Cream: A Global History. Follow Laura on Twitter, @foodandthings.

Indeed, most of us take the banana for granted. They're what you slice onto your breakfast cereal. They're the butt of jokes ("There's a banana in my ear!"). They're available all year round — an inexpensive food item that can't seem to match the allure of today's more trendy fruity offerings, such as the pomegranate or the goji berry.

But what I like best about the banana — which is a seedless berry, not a fruit, and the up-to-25 foot high "tree" is actually a giant herbaceous plant — is its versatility, especially when it comes to cooking. Indeed, there are a lot more things to do with bananas than peeling and eating them.

Bake bananas into that old bake-sale standby banana bread, moist and fragrant and studded with nuts and raisins. But don't stop there. Need something to enrich your pancake batter? Fold in some sliced bananas with blueberries or peaches. Or layer them in a cream-laden custard for a decadent banana cream pie. Then there's fritters, where the crunchy exterior plays off the molten bananas within. Swirl them in a blender to make daiquiris, and puree them in your morning smoothie for a dash of richness. (Are bananas fattening? You be the judge: A medium banana has 105 calories, but because of their rich taste and high fiber content, you feel full after eating one.)

Bananas play well with savory ingredients, too. Add curry and bananas to chicken, and plain old poultry morphs into a tropical delight, or prepare fish with bananas, a bit of coconut milk and some herbs, a bit of cumin or ginger.

It may now seem far-fetched, but the banana was once considered wildly exotic. First cultivated in ancient times in Southeast Asia, bananas arrived in Europe in the 15th century. Until the late 19th century, the sunny yellow fruit was virtually unknown in the U.S. When bananas did arrive, they caused a huge sensation. At the 1876 Centennial Exposition in Philadelphia, the display of towering banana plants was so popular that a guard was posted to keep gawking fairgoers from pulling it apart for souvenirs, writes Virginia Scott Jenkins in Bananas: An American History.

It wasn't long before bananas — hundreds can hang from a single tree — became cheap and abundant. Their popularity meant that large U.S. growers, such as United Fruit Co., gobbled up land in Central America to expand their plantations to meet the growing demand. During the early 20th century, the U.S. intervened several times in order to support these economic interests. This is when the term "banana republic" was coined to describe a corrupt dictatorship whose government was controlled by American growers.

Today, Americans mostly know only one variety of bananas — the Cavendish. That's the familiar sweet or dessert banana. But there's also the plantain, or cooking banana, with its higher starch content. Beyond that, more than 1,000 red, blue, even black bananas with varied tastes and textures grow throughout the tropics, from Africa to South America.

But the familiar, reliable Cavendish is in trouble. A virulent fungus, which killed off the Gros Michel, an earlier common banana variety, poses a threat to the worldwide crop. Is there a danger that the banana Americans love could become extinct? It would "take a long time" before that happens, says Koeppel, and "hopefully they'll find a replacement variety."

When it comes to storing bananas, as just about everyone knows, they typically start out a bit green, then turn a sunny yellow. After a few days, they develop brown spots, but that's when they're perfect for baking or folding into smoothies for dessert or breakfast — and that's my favorite way to give the humble banana its due.

This recipe appeared in Bon Appetit's February 2003 issue, but it actually hails from McEwen's in Memphis, Tenn., whose banana cream pies are legendary. In this version, I reduced the sugar and increased the bananas for a more banana-y flavor. Though a plain pie crust is traditional, I used a chocolate cookie crumb crust instead. I find the chocolate contrasts nicely with the sweet custard. 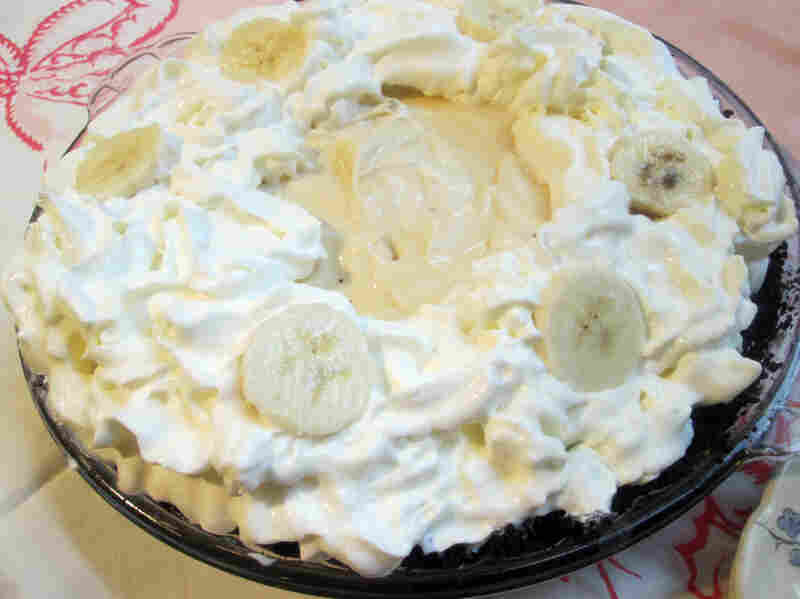 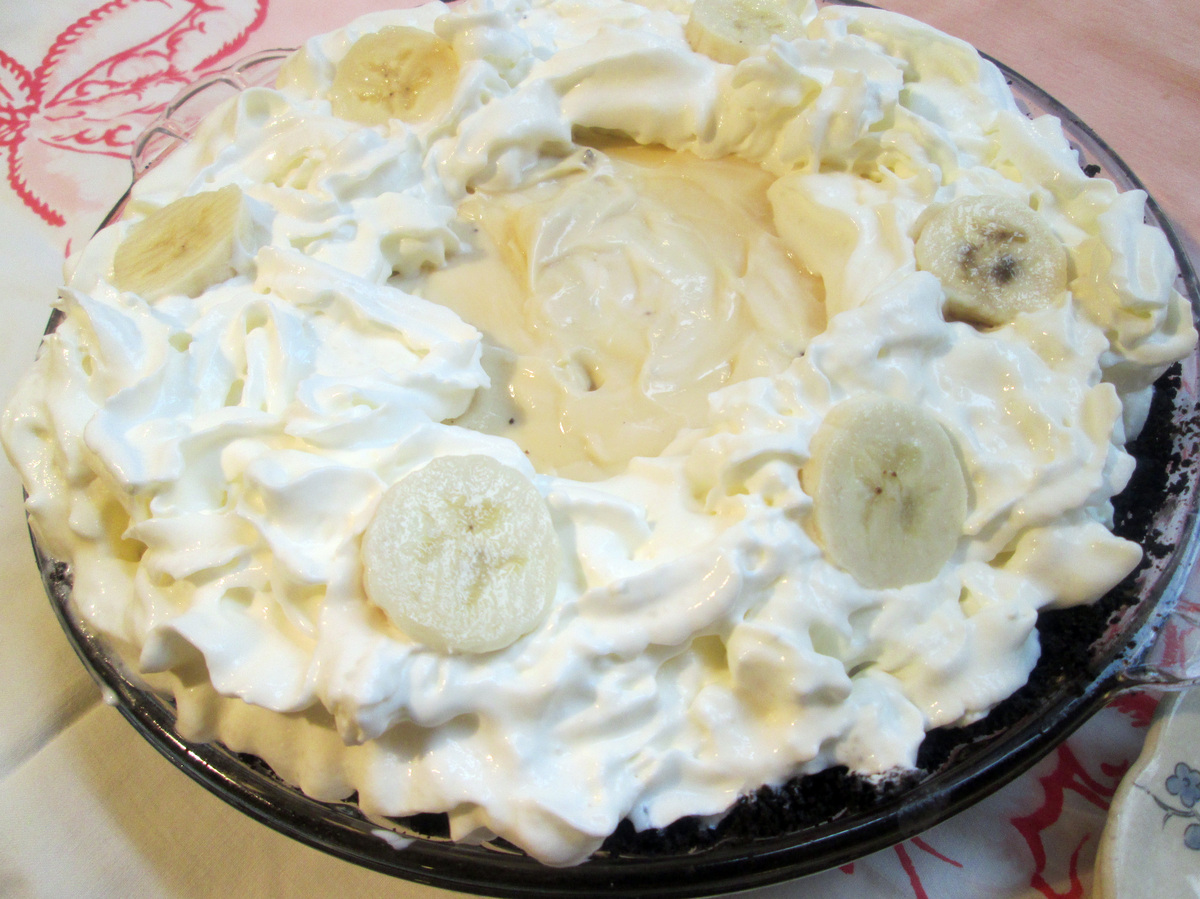 1/2 vanilla bean, split in half lengthwise

To make the crust, place the cookies, melted butter and salt in the bowl of a food processor fitted with a metal blade. Pulse the crumbs 12 to 14 times until the crumbs are the consistency of cornmeal. If you prefer finer ones, pulse one or two additional times.

Pour the crumbs into a 9-inch pie plate. With your fingers, distribute the crumbs evenly around the pie plate. Be sure the crumbs reach all the way up the sides of the pie plate and cover the bottom completely. Press the crumbs down against the plate with the heel of your hand or with an offset spatula.

Refrigerate the crust for 1 hour or place it in the freezer for a half-hour covered tightly with plastic wrap. (I like to freeze the crust before filling it with the custard. It makes it firmer and holds the custard better.)

To make the filling, whisk the sugar, cornstarch and salt in a large saucepan until it is well-combined.

Gradually whisk in a small amount of the cream, whisking thoroughly so that there are no lumps, over low heat. Add the rest of the cream and the whole milk, whisking continuously to avoid lumps. Add the egg yolks and keep whisking. You should wind up with a smooth custard without lumps.

With a paring knife, carefully cut the vanilla bean vertically down the center and scrape the seeds onto a plate. Add the vanilla beans and pod to the mixture. Whisk the custard over medium-high heat until the custard thickens and boils. Be careful not to burn the custard. This should take 4 to 5 minutes.

Remove the custard from the heat. Remove the vanilla pod. Whisk in the unsalted butter and the vanilla extract. Pour the custard into a large bowl and refrigerate. Let the custard cool completely in the refrigerator. It will thicken in about an hour. (If it's too thick, thin it with a bit of cream.)

When you're ready to assemble the pie, whisk the custard briefly then spread 1 cup of custard over the bottom of the chocolate cookie crust. Top with half of the sliced bananas. Pour 1 cup of the custard over the bananas making sure to cover the fruit completely. Repeat until you have used up all of the custard and bananas. Chill the banana cream pie for 2 hours. Top the pie with whipped cream and decorate the pie with banana slices. Cut the pie into wedges and serve.

This preparation, adapted from a 2004 Eating Well recipe, cooks the bananas quickly so they don't become mushy. The original recipe calls for rum, as do many other sautéed and baked banana recipes. But I prefer orange liqueur for the citrusy notes it brings to the dish. I like the addition of nuts for a bit of crunch. 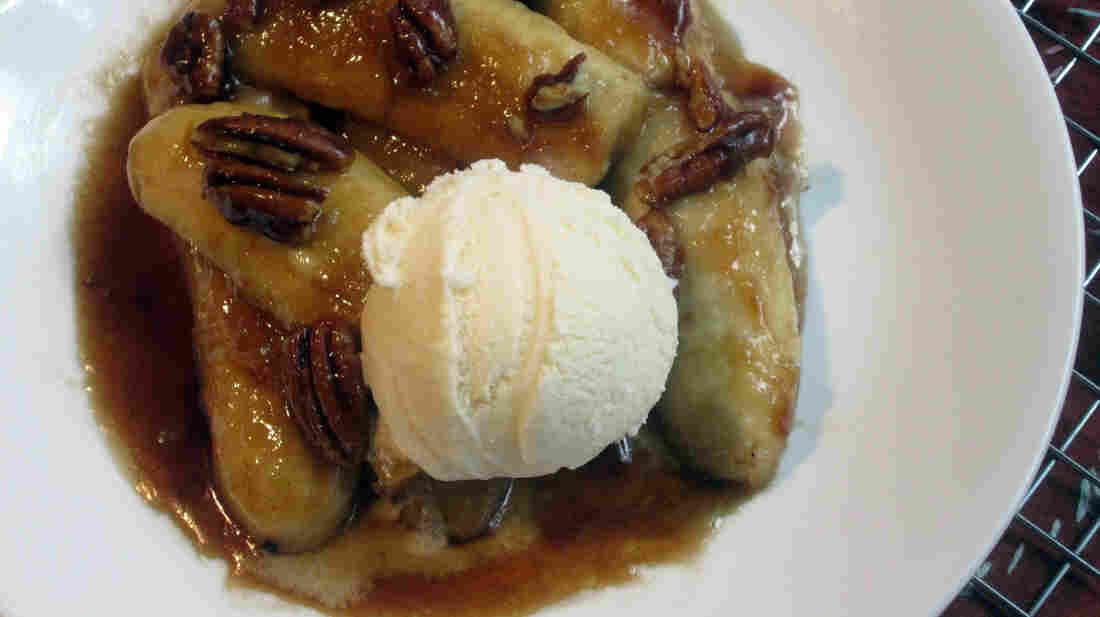 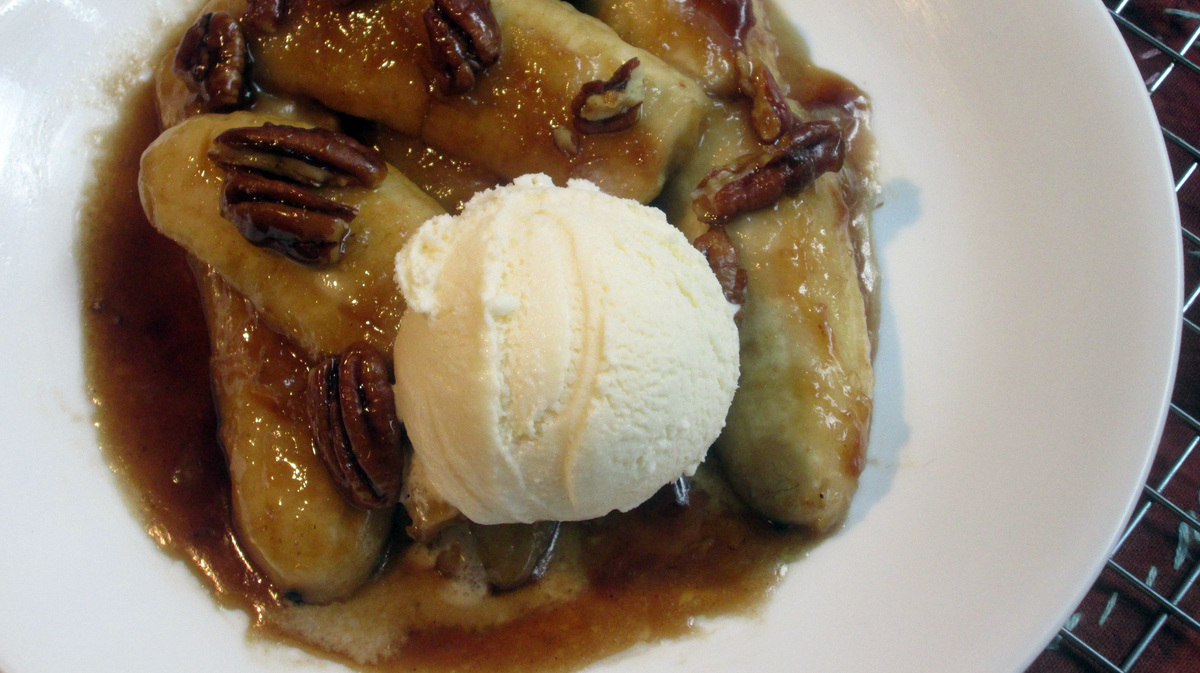 Cut the bananas in half crosswise, then again lengthwise. (This will make them easier to handle while cooking them.) Set the bananas aside.

Melt the butter in a medium skillet over medium heat. Add the brown sugar and honey and heat until the mixture just begins to caramelize, about 2 minutes. Saute the nuts for about 2 minutes in the butter-sugar mixture until they are well coated. Remove the nuts from the pan and set aside.

Turn each banana slice carefully with a spatula and cook them cut side down for 1 minute.

Remove the bananas from the heat and add the orange liqueur and cinnamon. Place the pan back on the heat. Cook the bananas for about 1 minute longer in the sauce, basting them as they cook.

Place the bananas on a serving plate or on dessert plates. Spoon the sauce on top of the bananas. Top with the nuts. Serve immediately with a scoop of vanilla ice cream.

You can easily use fresh fruit in this recipe, but then you'll want to refrigerate the smoothie to chill it. I use frozen fruit so that I can drink the smoothie right away. With all the vegans and dairy intolerant people in my family, almond milk is my choice, but you could use milk or yogurt as well. 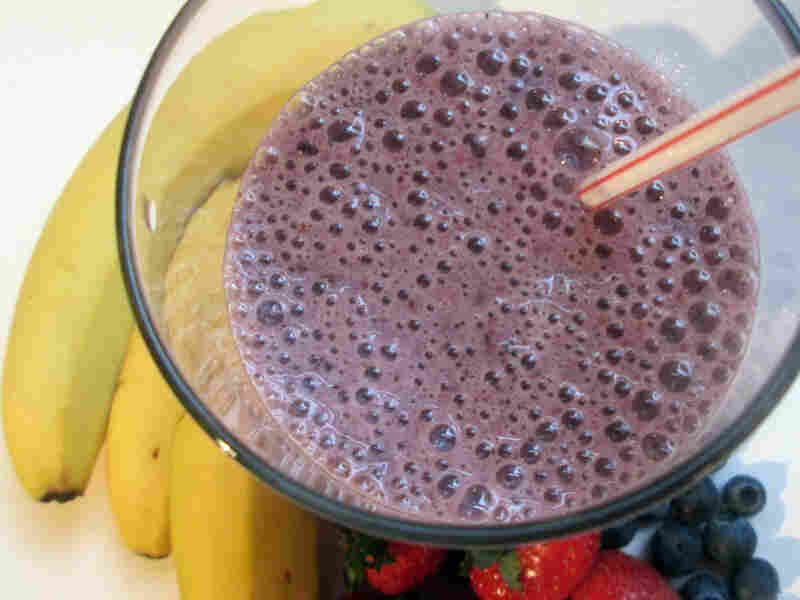 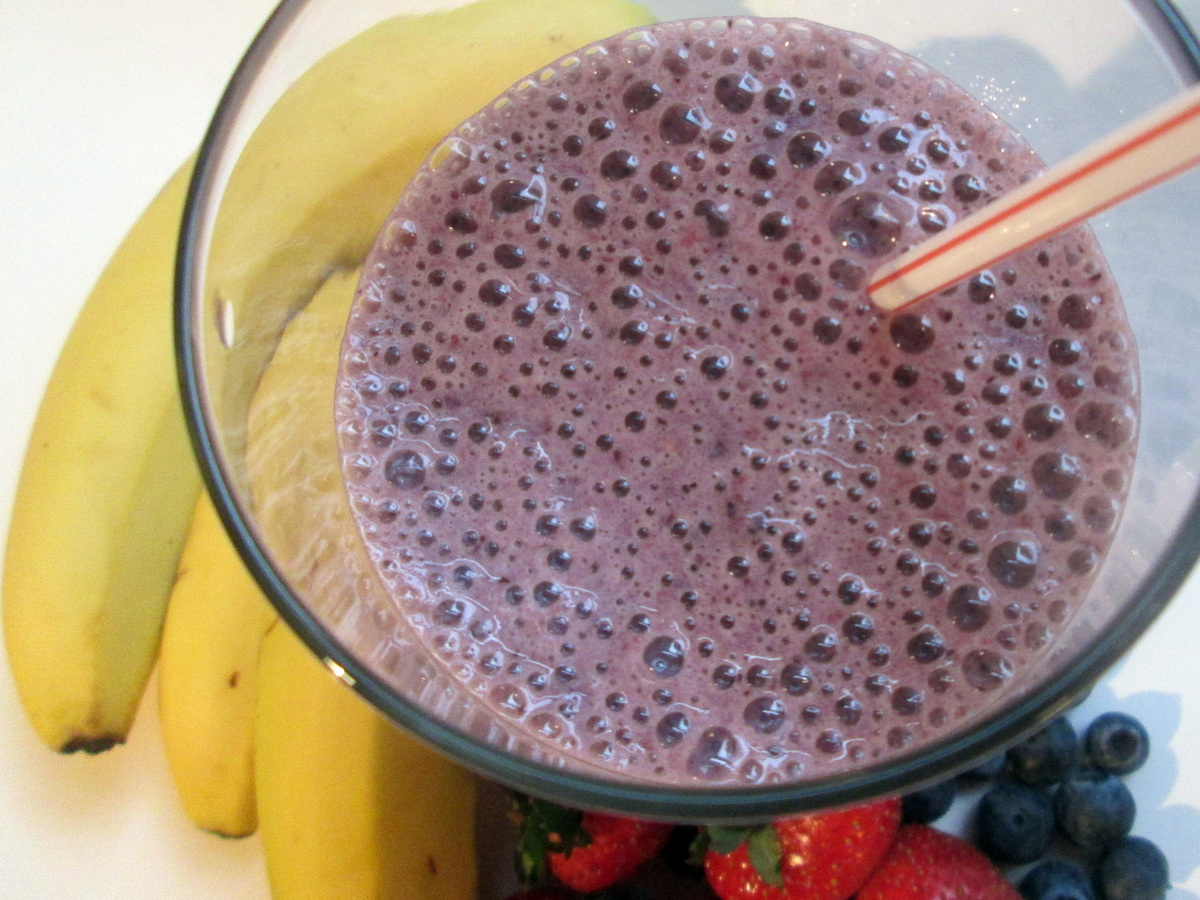 Place the fruit, almond milk, honey and orange juice into the container of a blender and blend until smooth. If you don't drink the smoothie immediately, place it in the refrigerator. If the smoothie becomes too thick, thin it with some additional almond milk.

This is a combination of many pancake recipes I've tried over the years. The bananas are added to what's otherwise a classic blueberry pancake recipe. You could easily substitute peaches, raspberries or any other fruit for the blueberries and regular or soy milk for all or part of the buttermilk. 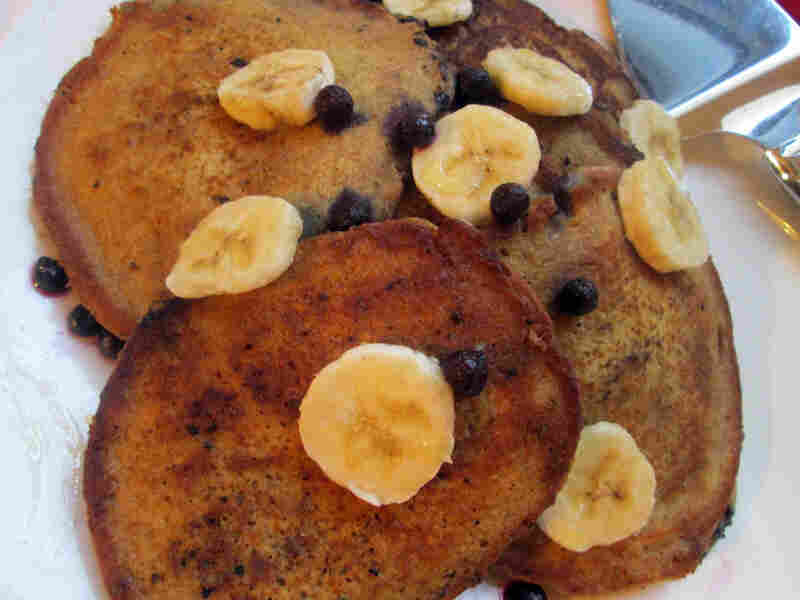 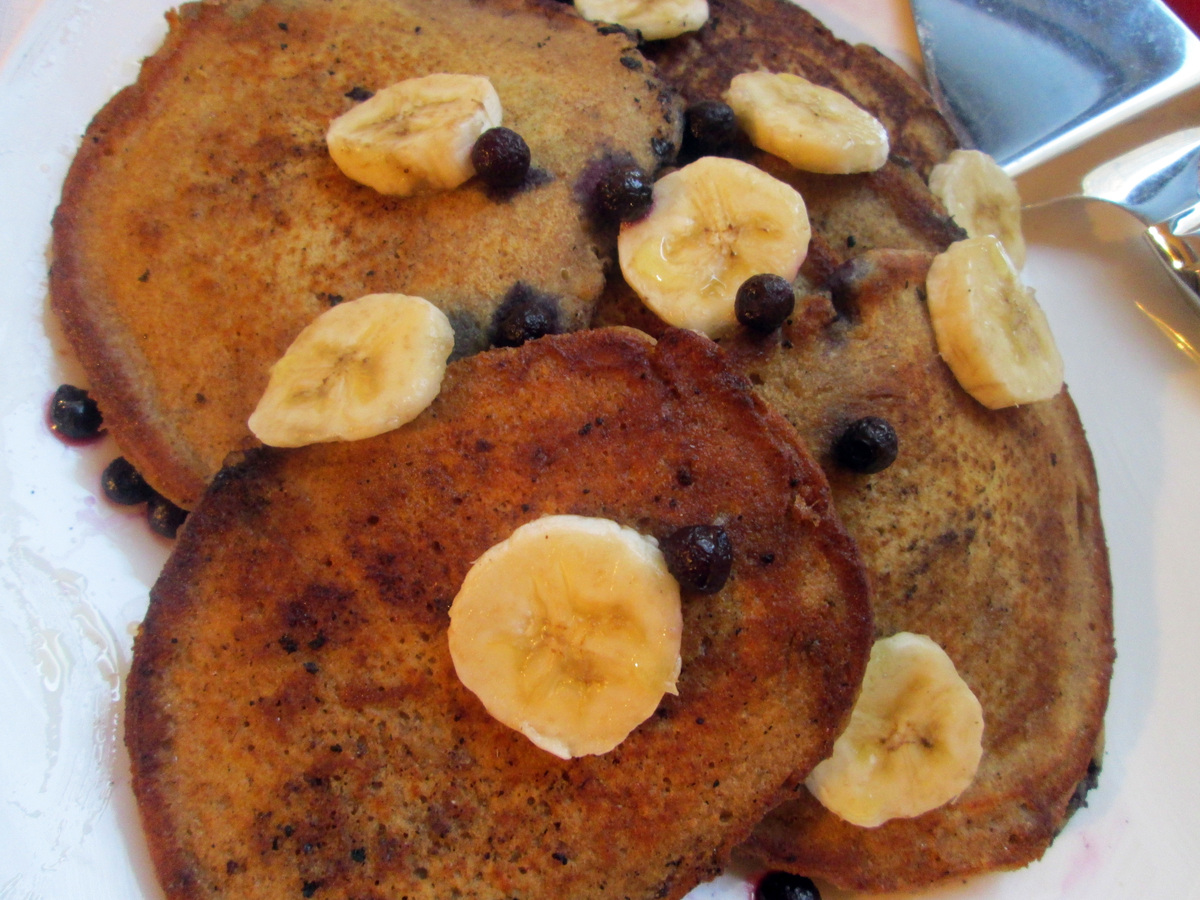 To make the pancake batter, combine the flour, baking powder, baking soda and salt in a large bowl.

In another bowl, whisk together the buttermilk, milk, eggs, honey and melted butter. Add to the flour mixture. Stir all the ingredients until they are just combined. Lumps in pancake batter are perfectly fine. If you overmix the batter, the pancakes will be tough.

Melt a tablespoon of butter in a large skillet. Using a small ladle or a 1/2 cup measure, pour some batter into the pan. (If the skillet is large enough, you may be able to make as many as 4 small pancakes at a time, but be careful not to crowd them.) Drop four slices of bananas and 4 to 6 blueberries onto each pancake. When the edges have set and bubbles start to appear, flip the pancake with a spatula and cook the other side about 3 minutes. (To keep the pancakes from tearing, try to resist the temptation to flip them more than once.) Repeat this process with the remaining batter.