Accessibility links
LA Mayor: 'The Basics Have Been Neglected For Too Long' Eric Garcetti says he wants to reinvent Los Angeles and promote its diversity, food and innovators — but first, he says, he's going to focus on a less-glamorous agenda: infrastructure. 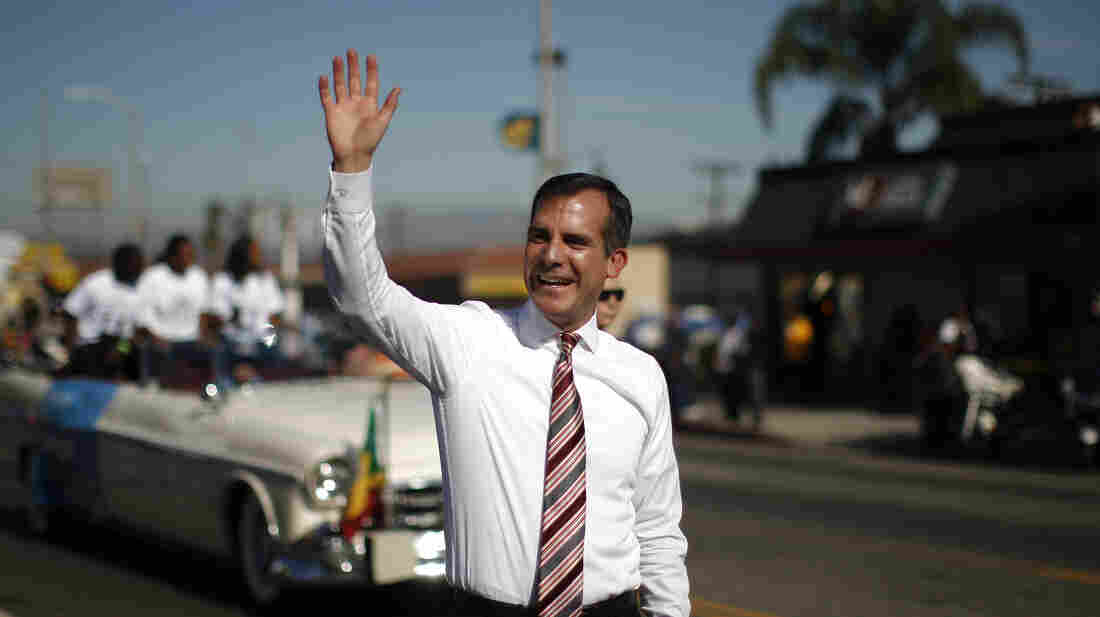 Los Angeles Mayor Eric Garcetti may have only been in office eight months, but he's got big plans. David McNew/Getty Images hide caption 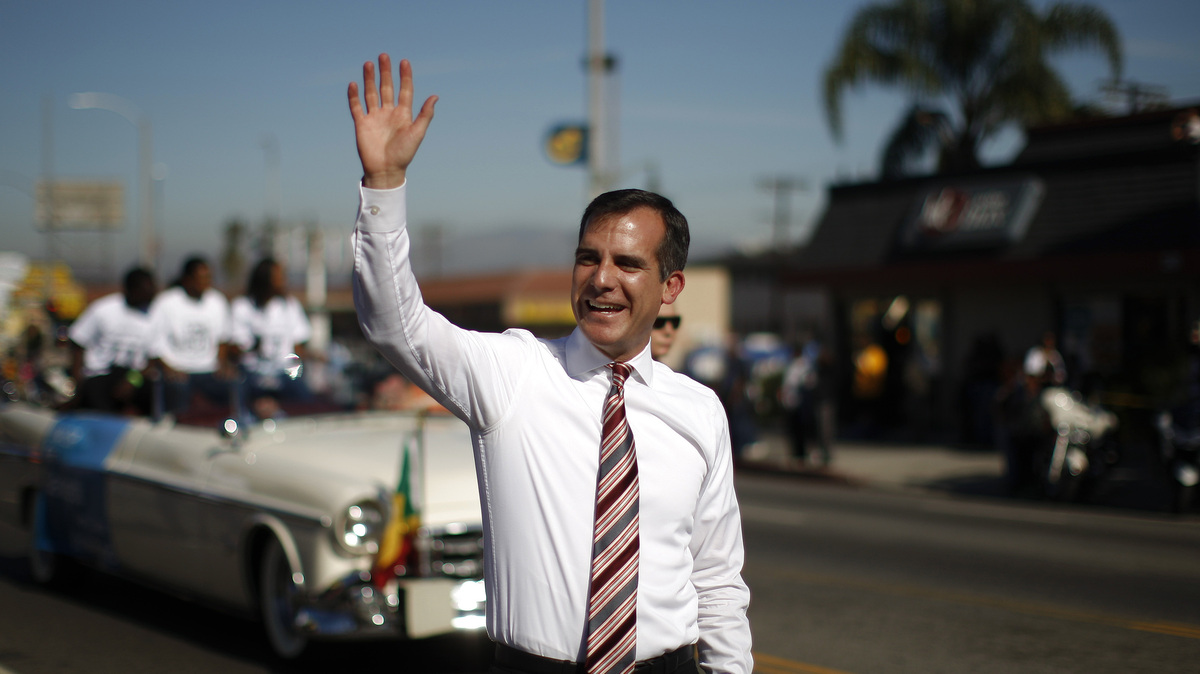 Los Angeles Mayor Eric Garcetti may have only been in office eight months, but he's got big plans.

Los Angeles may be known for its celebrities, glitz and glam, but the city's mayor, Eric Garcetti, is focused on something decidedly less flashy: infrastructure.

Take the city's airport LAX, for example. You'd be forgiven for mistaking its terminals for a cramped bus station. And stepping out onto the curb can feel like an assault on the senses, with the horns, aggressive shuttle drivers and travelers jostling for taxis.

"It seems a little disorganized," says business traveler Burton Webb of Boise, Idaho, on his first impressions. "I prefer airports that have good access to trains."

Not in LA. This is a city of almost 4 million people, with one of the busiest airports in the world — but no train into the city. At least not yet. Messy, chaotic LAX is emblematic of everything that Garcetti wants to change.

"The basics have been neglected for too long, and it's the foundation I have to lay in the first few years if I'm going to write the next chapter of LA," Garcetti says.

He likes to say that he wants to reinvent LA and promote its diversity, food and innovators — but first, there are enough streets to stretch a four-lane highway from here to France, but many are battered with potholes. There is a Metro rail system, but it's limited. LA covers 469 square miles, but just getting across this city sliced up by freeways can seem like a heroic feat.

"We destroyed our public transit system from the '30s and '40s and '50s, and so we're in the process of rebuilding it," Garcetti says. "A bigger program than anywhere in the U.S., but a long way to go."

A lifelong Angelino and former city councilman, Garcetti has quickly developed a reputation as being understated. You're not likely to spot him in public making a grandiose announcement. He seems most at ease talking about things like infrastructure. 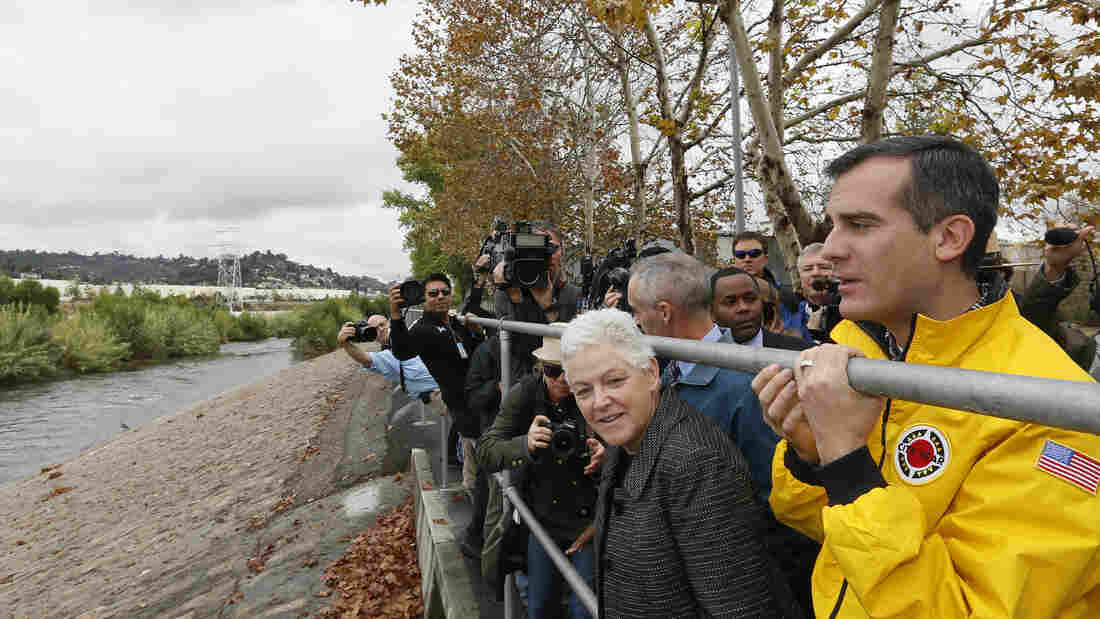 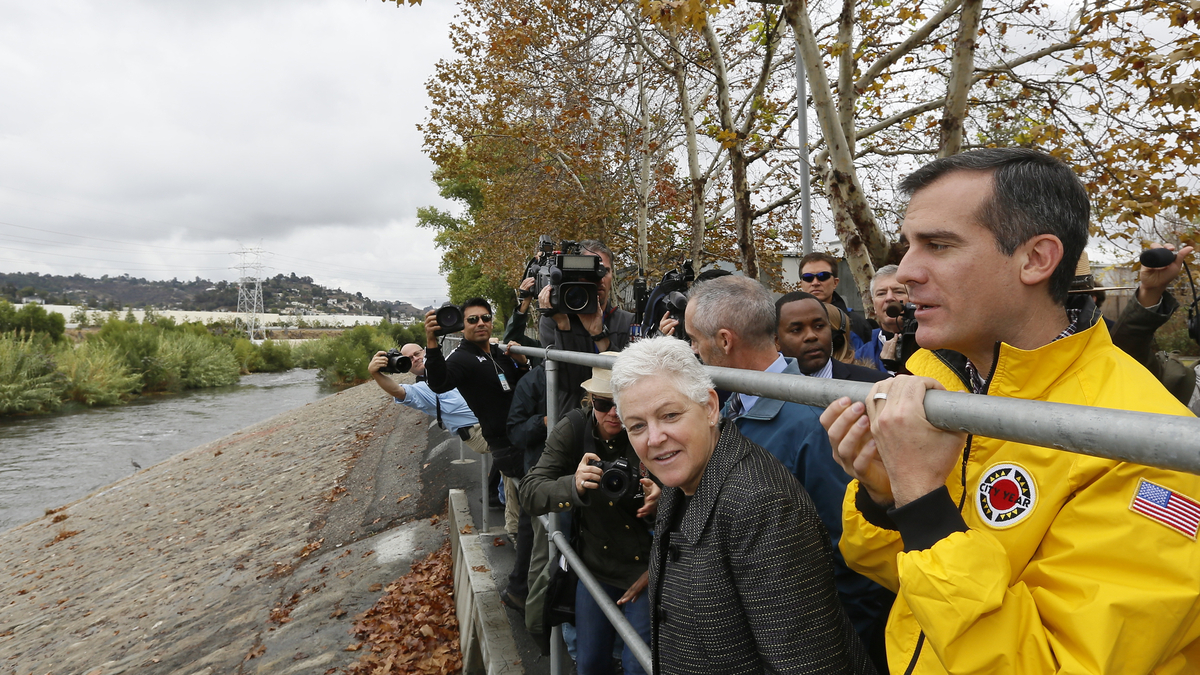 Recently, at a groundbreaking for a new voter-approved train line connecting a neglected neighborhood with the airport, the mayor got an opportunity to tout his transportation agenda. For years, lawsuits and infighting have prevented a train from reaching LAX.

"We're investing $36 billion local dollars ... to relieve traffic, to build a city that isn't so dependent on everybody owning a car," he said.

The mayor's schedule is crowded with stops like these — promoting transit in the early morning, a 10 a.m. trip to Koreatown to launch his pothole repair initiative, a speech in the suburban San Fernando Valley about conserving water.

"I would never mistake an understated style for a lack of ambitious policies," Garcetti says.

Still, they're not nearly as ambitious as those of Garcetti's predecessor, the flashy Antonio Villaraigosa. Right out of the gate, Villaraigosa made big plans, trying to wrestle more control of one of the nation's largest public school districts. He was also a rising star in the national Democratic Party.

"Angelinos don't want big promises, don't want glitz," she says. "What they want is to be left alone, to do what they need to do to live their lives, to maybe get the traffic situation under control."

But Garcetti has barely been in office eight months; Bebitch-Jeffe notes that his leadership has yet to be truly tested with a major event like a disaster. And Garcetti isn't exactly low-profile, either, when it comes to national politics, regularly appearing for photo ops with senior White House officials.

One rare, rainy morning, EPA Administrator Gina McCarthy came to have a look at Garcetti's plan to restore the Los Angeles River. Long the brunt of local jokes, it's more concrete storm drain than river.

The mayor addressed a small crowd along a restored section of the river where native plants had started to flourish.

"Here, we used to have our back to the river. Today, we're beginning to turn our faces to the river again. To see the beauty of it, to make sure we get the pollution out of it," Garcetti said.

But in a sign of the challenges still ahead, Garcetti and the EPA chief had to cancel their plans to kayak there. The rain sent runoff pollution into the storm drains that feed the river. It wasn't safe for them to get into the water.