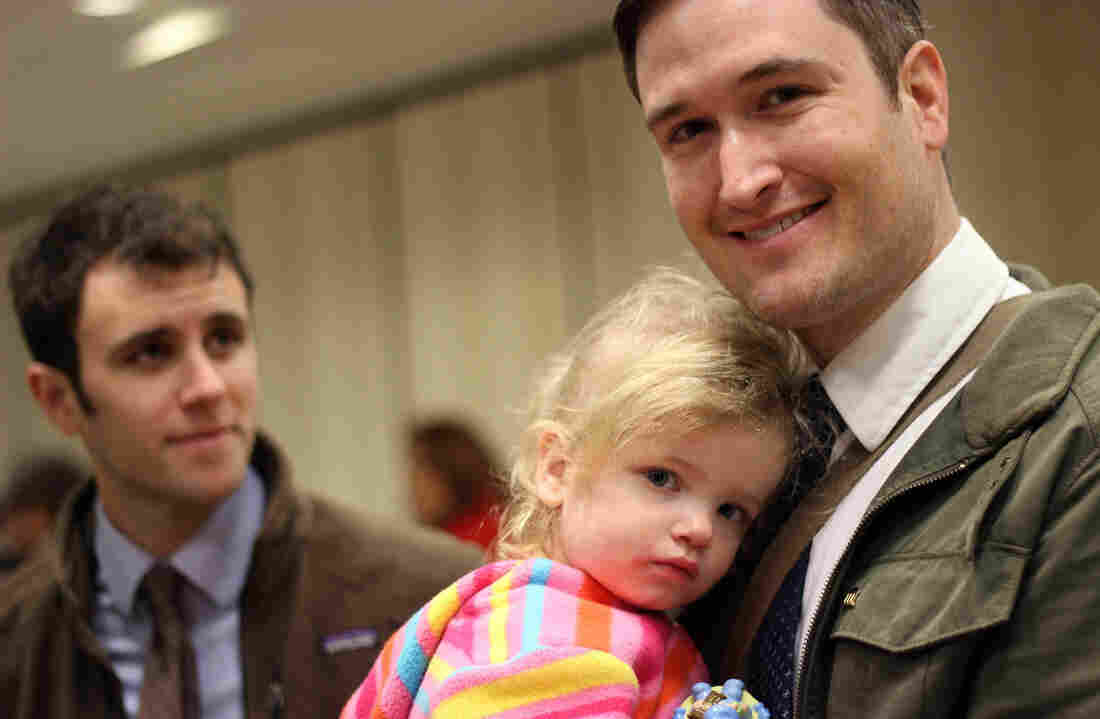 Nick Van Sickels (right) with his husband, Andrew Bond, and their daughter, Jules. The couple was legally married in Washington, D.C., but because same-sex marriage is banned in Louisiana, Bond has no parental rights. Janet McConnaughey/AP hide caption 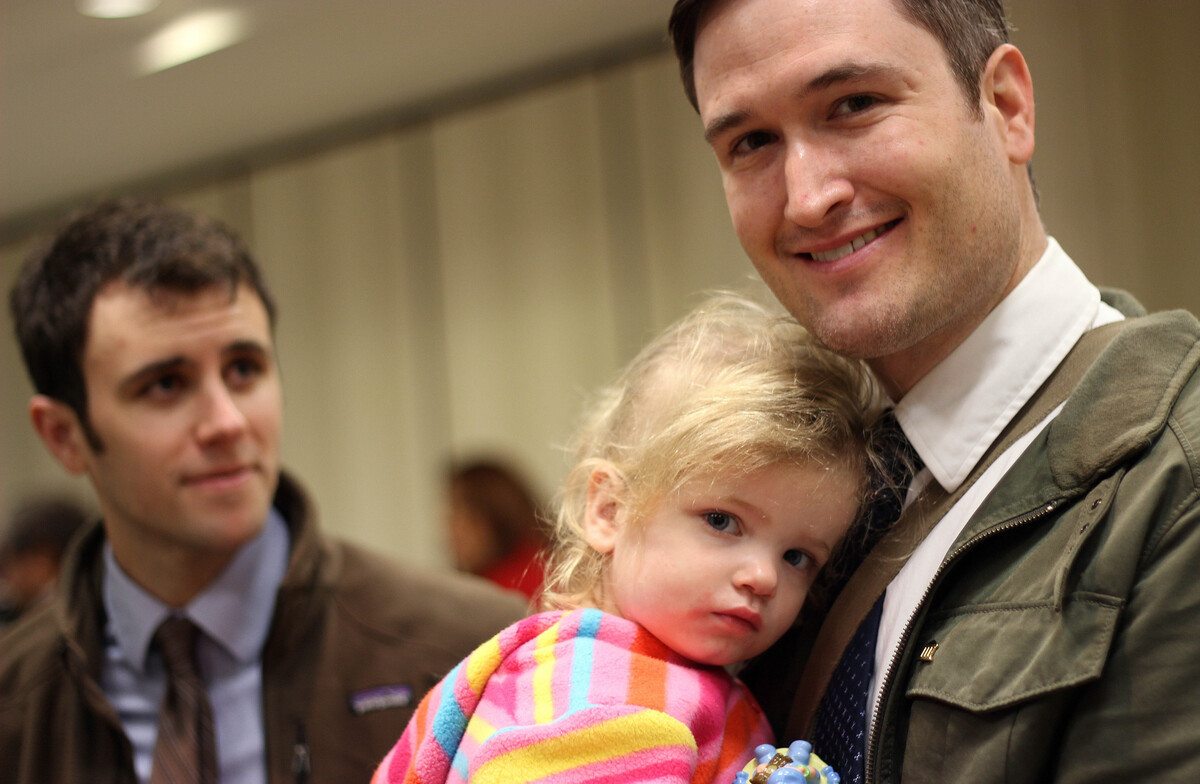 Nick Van Sickels (right) with his husband, Andrew Bond, and their daughter, Jules. The couple was legally married in Washington, D.C., but because same-sex marriage is banned in Louisiana, Bond has no parental rights.

The legal battle over gay marriage is moving to the Deep South. Buoyed by federal court victories in Oklahoma, Kentucky and Virginia, gay-rights activists are taking on traditional marriage laws in the very states where those laws enjoy overwhelming public support.

Take Alabama, where Paul Hard is suing the state for violating his constitutional rights to equal protection and due process following the death of his partner, David Fancher, whom he legally married in Massachusetts. Alabama has a constitutional amendment that forbids same-sex marriage.

The couple, says Hard, "had every right to expect that we should be able to carry our rights as American citizens wherever we went. This is not someplace where you have your civil rights disappear at the state line."

But when tragedy struck, Hard learned otherwise. Fancher was killed in a traffic accident. Hard had trouble getting information from the hospital, the funeral home marked "never married" on the death certificate, and he's prohibited from collecting any damages from a pending wrongful death lawsuit. Hard, a Montgomery, Ala., college professor, says he had all the spousal responsibilities but none of the rights.

"I was David's spouse in every regard when it came to paying the bills, arranging his burial, picking out the marker, everything that mattered," Hard says.

"It creates two classes of people under Alabama law. Men and women who are married who are allowed to have their marriages be recognized, and for example, Paul and David, who were married but their marriage isn't recognized," says Alesdair Ittelson, an attorney with the Southern Poverty Law Center. "The United States Constitution says you can't treat people differently."

But Alabama state Sen. Scott Beason, a Republican, says gay-rights activists have brought their fight to a region where they face the strongest resistance.

"The South is absolutely embedded and believes wholeheartedly in Christian principles [that marriage is between a man and a woman], so they're just taking the tip of the spear to us. And unfortunately I think we should just be left alone," Beason says. "We're not talking about something that was simply passed by the Legislature. We're talking about constitutional amendments voted on overwhelmingly by the people of the state."

More than 80 percent of Alabama voters approved the Sanctity of Marriage amendment. Similar majorities banned same-sex marriages in other Deep South states, including Mississippi and Louisiana. Challenges are now pending there as well. In Mississippi, a woman is suing to have the state recognize her marriage so that she can legally get a divorce. And in Louisiana, four same-sex couples are seeking equal protection and free speech in matters ranging from taxes to adoption.

"For us it's about our daughter," says Nick Van Sickels, a New Orleans doctor. He and his husband, Andrew Bond, a teacher, were legally married in Washington, D.C. They adopted a baby girl, but only Van Sickels is listed as her father on the birth certificate. In Louisiana, Bond has no parental rights.

"Each year we have to fill out a legal form that Nick surrenders powers so that I can make educational decisions [and] health care-related kind of stuff," Bond says.

Gay-right advocates like Chris Otten with the Forum for Equality in Louisiana believe the constitutional challenges in federal court have momentum.

"These laws are falling across the country, and what's going to happen unfortunately for those who live in the Deep South, you can't have 47 states that allow same-sex marriage and three states that hold out," Otten says.

But leaders of those states also invoke the Constitution. During a speech in California last week, Republican Gov. Bobby Jindal of Louisiana defended the rights of states to reject gay marriage as a matter of faith. He calls the legal battles an assault on the freedom of religion.

"It is a war — a silent war — but it is a war against religious liberty. This war is waged in our courts and in the halls of political power," Jindal says.

In Alabama, Chief Justice Roy Moore says the moral foundation of the country is under attack. Moore has launched a campaign for a Marriage Preservation Amendment to the U.S. Constitution.

"What we've stepped into now is tyranny, and we're forcing states to accept something that they find morally reprehensible," Smith says.

While the legal battle over gay marriage plays out in the federal courts, some states are also looking to legalize discrimination against gay couples on religious grounds. Similar bills have been introduced in Congress.