Accessibility links
Who Killed The New 'RoboCop'? Chris Klimek looks at what made the RoboCop remake such a disappointment, from its inability to be at all satirical to its need to overexplain absolutely everything.

Who Killed The New 'RoboCop'?

Who Killed The New 'RoboCop'? 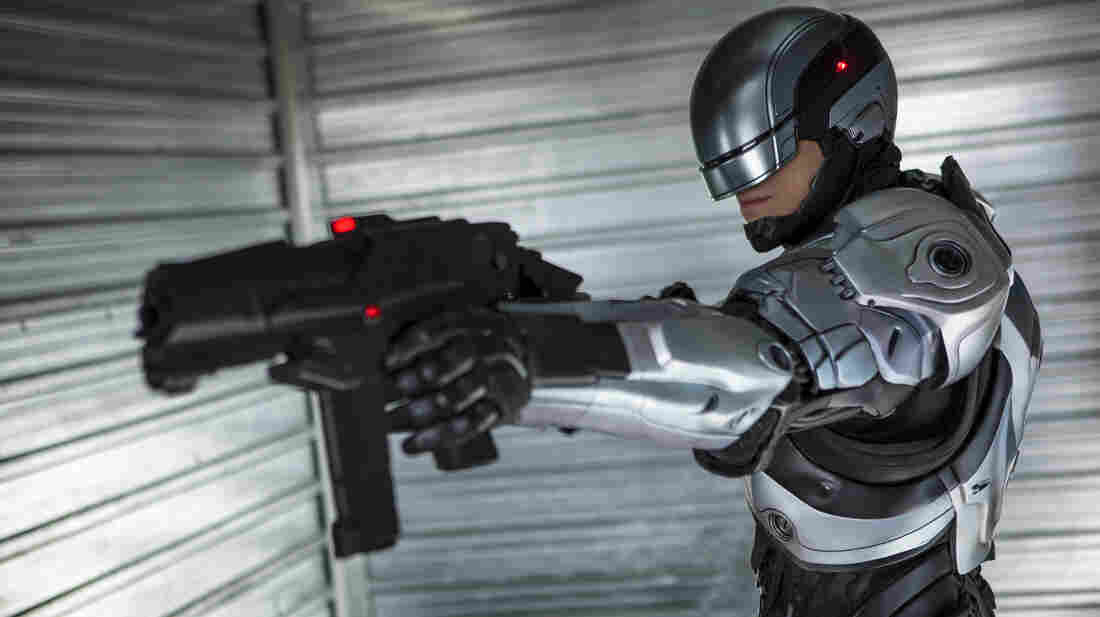 Alex Murphy (Joel Kinnaman) is a Detroit cop brought back from the brink of death — as a cyborg supercop built for reducing crime and increasing profit. Kerry Hayes/Sony Pictures hide caption

The Retouchables is a column examining the recycling of pop-cultural properties. Future installments will discuss remakes in development, or that should be, or that were made but should not have been, or for which I have written several script treatments. Did you not get them? Call me.

Our inaugural dispatch deconstructs a long-in-development remake that has finally come to semi-sweet fruition.

The Past Of The Future Of Law Enforcement

"It takes money to make money," one sadistic but enterprising outlaw tells another early in Paul Verhoeven's answer to Alexis de Tocqueville's Democracy in America, the pungent 1987 sci-fi satire RoboCop.

That's certainly the rationale behind the long-threatened, oft-delayed remake, which finally opened last week. Adjusting for inflation, RoboCop Redux cost between four and five times what Verhoeven's scrappy American debut did, and lavish visual effects and geek-baiting A-list cast aside, it's between one-fourth and one-fifth as inspired.

Even though the original got more out of its premise than anyone could've reasonably expected — even the studio, Orion Pictures, thought themselves generally above this sort of thing, at least until James Cameron's The Terminator became the picture that kept them solvent — a RoboCop remake was probably as inevitable as Judgment Day.

Briefly: RoboCop 2 (written by the hottest guy in comics at the time, Frank Miller, and directed by Irvin Kershner, who'd made a little sci-fi movie called The Empire Strikes Back that did okay) reprised the original's gruesome bloodletting and sardonic humor but underperformed, mostly because it was terrible. Next, a foundering Orion Pictures decreed that RoboCop 3 would be a kid-friendly picture, thereby insuring no kid would ever want to see it. It sat in the can for two years, was dumped in theatres in 1993, and tanked.

The rusted-out RoboCop brand sputtered on in a bizarre series of cartoons and made-for-TV — Canadian TV! — miniseries. The parent-approved tone of the early spinoffs was such an affront to my tween dignity that I swore off any and all non-theatrical RoboCop exports. However, noted critic and "filmatist" Outlaw Vern — author of the best and only critical study of the Steven Seagal ouvré — has been doing a very deep, very funny dive into the more outré corners of the Robo-verse with his RoboCop History Week posts.

José Padilha, the Brazilian director of the documentary Bus 174 and the pair of Elite Squad action pictures, was a sound choice to revive RoboCop on paper: He's made a string of arresting, controversial pictures outside of the U.S., and now he wants to crack the English-language market. That's precisely where the Dutch provocateur Verhoeven was a generation ago.

But now there's just too much money at stake for RoboCop '14 to be permitted an R rating or an actual point of view — two key assets Verhoeven had in abundance. (Depending on which report you believe, Verhoeven had to submit between six and 11 edits of RoboCop to the MPAA before the watchdog group would let it off with an R rating. That's what I mean when I say its R was "abundant." Verhoeven's preferred, unrated cut is the one the Criterion Collection issued on DVD, splattery ultraviolence intact.)

The new movie isn't a insult to those of us who like this stuff, like the 2012 PG-13 remake of Verhoeven's follow-up R-rated sci-fi, Total Recall, was. It's just inert. It feels like what happens when someone with a conventionally melodic singing voice covers a song by Leonard Cohen or Bob Dylan – it's sensually nicer than the original, but less expressive.

Padilha's movie does time-strapped viewers a favor, I guess, by putting its best scene right at the top. The cold open is a televised op-ed from right-wing demagogue "Pat Novak" (Samuel L. Jackson) about the infallibility of the robots that've made possible the glorious U.S. occupation of Tehran, without a single American casualty! Shouldn't we deploy them at home, too?

We see civilians forcibly subjected to airport-style body scans in the street by towering Transformers, while an Army General — I forget his name, but it's probably Ripper or Kilgore or something like that — proffers the Cheneyesque opinion that "the honest ones" are grateful for this violation.

Then the suicide bombers, whom we're told in hedge-betting subtitles want to kill no one but themselves, show up and blow up, and a little boy "threatens" a truck-sized Armybot with a knife. It's all tense and chaotic and committed, and it primes us to expect an argumentative movie that never arrives.

There're a pair of other early scenes that manage to one-up the operatic quality of Verhoeven's original. When Murphy, the cop who gets robo-ed — in this telling, he remembers his human past the moment he wakes up in the lab — has a panic attack and runs out of the plant where they've built him, which turns out to be in the middle of a rice field in China. We see everything that remains of his organic body: His head, his right hand (the same one Clarence Boddicker shot off of him way back when, trainspotters!) and a pulsing, dewy, pink pair of lungs. That's the last inventive or surprising thing that happens, and there are still 75 minutes of movie left to go.

There are a handful of nods to the original that the diehards will laugh at, rather too loudly and knowingly, and no one else will notice.

This movie relates to the original RoboCop in the same way the Christopher Nolan Batman pictures relate to the Tim Burton Batman pictures (though it's not nearly as weird or personal a vision as either iteration of Batman): There's a sincere, honorable attempt by screenwriter Joshua Zetumer to make everything at least sort of plausible, which takes away the fever-dream quality that made the original so memorable.

For example: The RoboCop looking ahead from 1987 cannily avoided telling us what year it was taking place, though we can infer it was probably supposed to be earlier than 2014. The scenes of Murphy's transformation — resurrection, to use Verhoeven's word — are all shown from his POV, a sort of primitive version of Google Glass, as the development team tinkers with him. He's in and out consciousness, and he doesn't know how much time is passing, so we don't get to know.

But unless your name is Christopher Nolan, a nine-figure budget permits no such ambiguity. Test audiences do not like to be confused! Not for one minute! Even though confusing the audience for a brief spell is a fair and useful storytelling tool! So it's 2028 in this movie. The distance between one scene and the next is exactly THREE MONTHS LATER, the title cards reassure us. A shot of the U.S. Capitol is accompanied by the onscreen legend, WASHINGTON, DC. Thanks, movie.

The same goes for the performances: Yes, they're more naturalistic than the stylized, quotable, all-exclamation-points line readings the original gave us. There is crying in this one, and it's very believable crying. That's an improvement? Says you.

OmniConsumer products' hostile takeover of the Detroit Police Department has been dropped. OCP is now a robotics company, instead of an outfit that seems to dabble in everything (it's in the name, people!) that develops a cyborg marshal seemingly on a lark. Although they lie about to what extent he is or isn't a slave to his programming, they never deny that their new device is Alex Murphy, the policeman critically injured in the line of duty and whom they've outfitted with an advanced prosthetic body, instead of simply not addressing whose face they've just grafted onto their new machine. It all more or less makes sense, which blunts its effect as satire.

It's unclear if the filmmakers even wanted this film have a sardonic edge. It seems like an element they were forced to incorporate because it's part of the RoboCop brand.

RoboCop was far ahead of its time, but the times caught up and kept right on going. The sour subversion that seemed so unpredictable and dangerous in 1987 is ubiquitous now.

And save only for cyborg lawmen, everything it foretold has come to pass. Private contractors and unmanned drones fight our wars for us. We never go anywhere without our smartphones within reach. A generation of war veterans relies on advanced prosthetics made of strong, lightweight metals. People are on waiting lists to test Google glass. The physical transformation from man to machine that RoboCop '87 regarded with operatic horror now seems almost desirable.

The new RoboCop also succumbs to contemporary action-picture fashion by ending, and then ending some more, and then ending again. (When James Cameron's pre-Titanic movies did this, it was like a calling card, and each ending really was progressively more thrilling. But then James Cameron won an Oscar and went diving for 10 years, and everyone else in Hollywood tried to become his replacement.)

The original RoboCop has one of the punchiest, pithiest kickers ever: The Old Man fires evil schemer Dick Jones, Robo shoots Jones two or three or twelve times, exeunt Jones pursued by glass shards of what was the 80th-story window. The Old Man congratulates Robo on his marksmanship and asks his name.

It always reminded me of the ending of Billy Wilder's Some Like It Hot, when Jack Lemmon-in-drag finally confesses to his admirer that he's a man. "Nobody's perfect," the guy shrugs. Well, not always. But once I saw Some Like It Hot, some years after my 25th or 30th VHS viewing of RoboCop, it reminded me.

SPOILER: The end titles of feature The Clash's cover of "I Fought the Law." It seems subversive and cheeky because, hey, it's that band that wrote that M.I.A. song! Then you remember that cover was already a decade old when the original film came out. It was written when President Eisenhower was in office, the very guy who warned us in his farewell address that we should never, ever hand over control of of our public institutions to companies that build armed robots.

There is a punk-rock RoboCop out there, though, a film that speaks to the trepidation the prospect of tinkering with a classic has inspired in enterprising geeks everywhere. It's called Our RoboCop Remake, it's a fan-made scene-by-scene retelling by about 50 teams of filmmakers connected via the Channel 101 network, it runs just a hair longer than the original movie, it probably counts as Fair Use, and it's streaming right here.

Even the tagline is perfect: If anyone's going to ruin RoboCop, it's going to be us.