Accessibility links
Closing America's Largest Landfill, Without Taking Out The Trash The Puente Hills Landfill received waste from all over Los Angeles County for more than 50 years, and eventually grew higher than 500 feet. But with the site's closure, the trash won't just disappear. 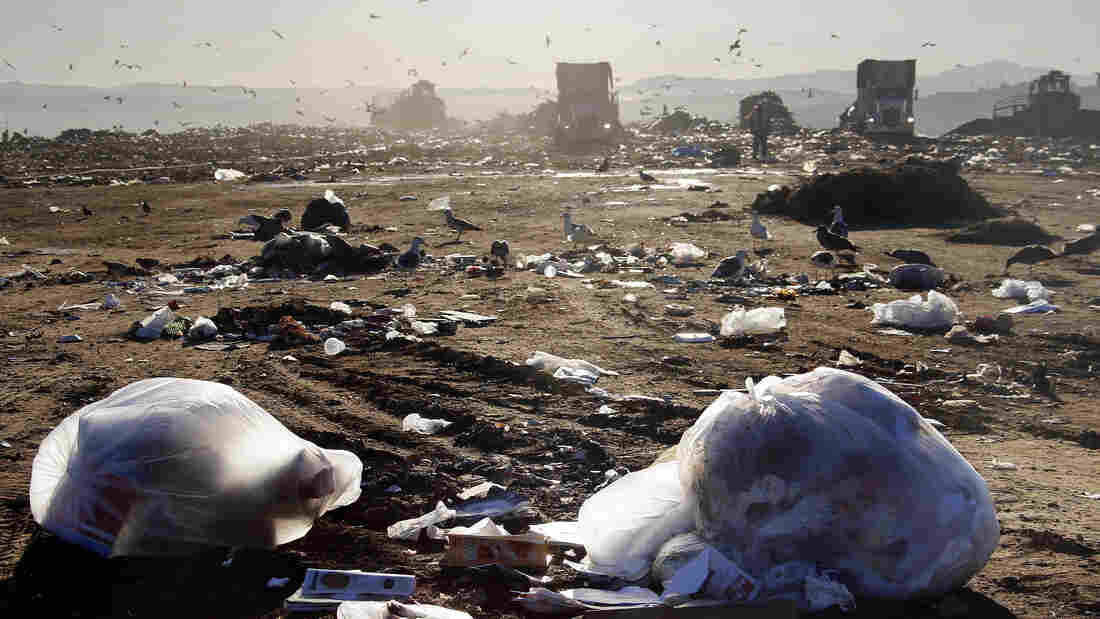 Trucks dump trash at the Puente Hill Landfill in Puente Hills, Calif., on October 31, 2013. The nation's largest landfill is now covered with soil and closed, and will one day be a park. Nick Ut/AP hide caption 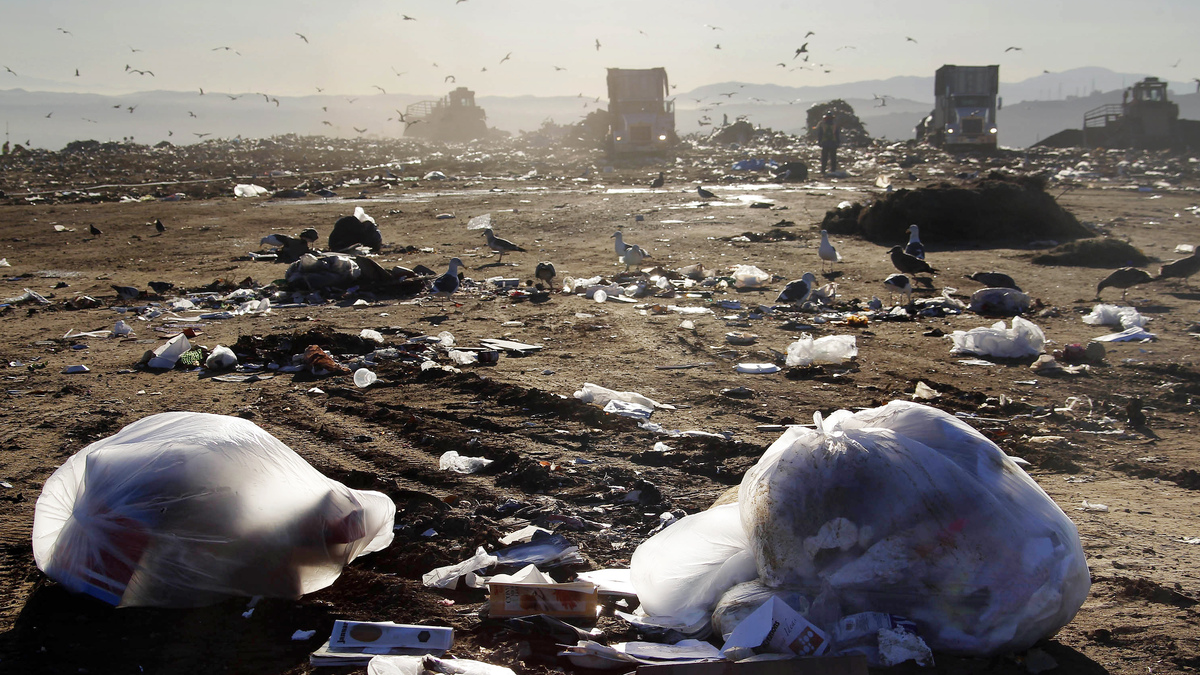 Trucks dump trash at the Puente Hill Landfill in Puente Hills, Calif., on October 31, 2013. The nation's largest landfill is now covered with soil and closed, and will one day be a park.

The covering of America's largest landfill, east of downtown Los Angeles, is underway.

The Puente Hills landfill took in trash from all over LA County, becoming the go-to repository for most of Los Angeles' garbage. Over its more than 50 years in operation, the landfill grew higher than 500 feet.

It stopped receiving new trash in October, but the old waste will stay. All those years' worth of garbage will be covered up and remain underneath the ground.

Bill Gross, one of the supervising engineers of the facility, says they're adding the final cap on the landfill. "We're putting 5 feet of cover soil on top of the whole thing to basically seal in the refuse," he says.

Closed landfills are often treated this way: covered up and eventually turned into something else once it's deemed inactive.

The Puente Hills land will one day be a park, but critics argue the move merely masks a larger issue. 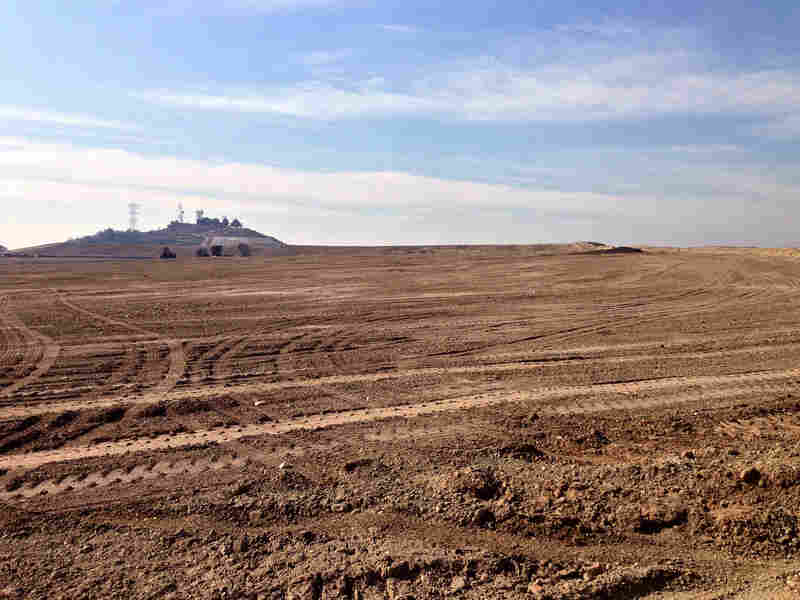 Much of the Puente Hills Landfill is closed and now covered with top soil to seal in the trash. Liyna Anwar/NPR hide caption 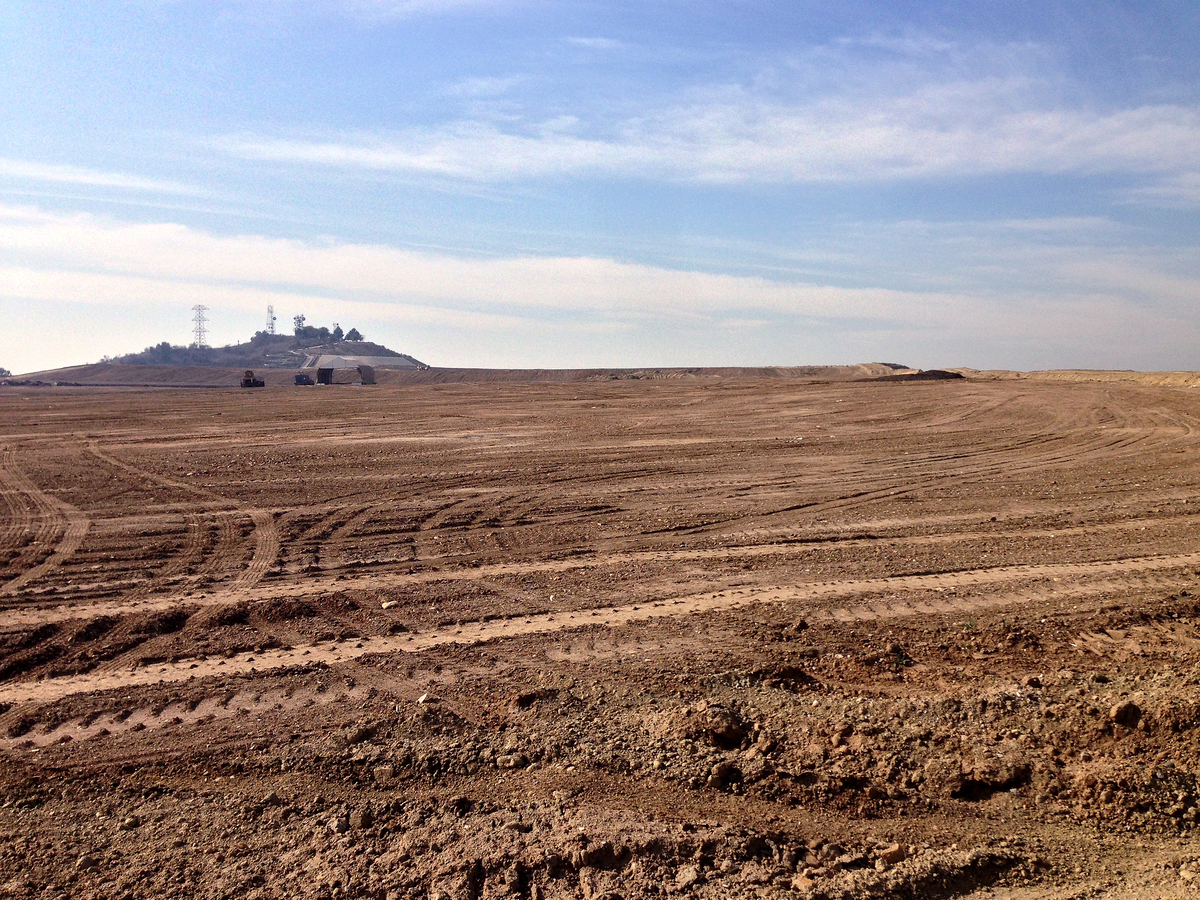 Much of the Puente Hills Landfill is closed and now covered with top soil to seal in the trash.

Puente Hills was never meant to be open forever. In fact, in 2002, Los Angeles County issued the landfill its last permit. So the Sanitation District knew then that the end of 2013 meant the end of the landfill. Officials had to figure out where new trash would go and what to ultimately do with Puente Hills.

As a park, the covered landfill's original identity will become a memory. Pulitzer Prize-winning journalist Edward Humes, author of Garbology: Our Dirty Love Affair with Trash, says constantly covering up our trash means we never fully understand how much garbage we generate.

"You notice what we call our trash companies: They're waste 'management.' Think about that," Humes says. "They're managing our waste; they're not reducing our waste, they're not disappearing our waste. And what that means is they're really good at picking it up and getting it out of sight [and] making garbage mountains out of it."

The average American makes 7 pounds of trash per day. That's about 50 percent more than what we made back in the 1960s.

Not all of that garbage stays put on U.S. soil, though. In fact, trash is the country's largest export by volume.

The countries that buy the garbage from the U.S. are the ones that build the most things, mostly China, according to Sam Pedroza, an environmental planner at Puente Hills.

"It makes sense ... they come in with these huge ships to the port filled with goods, and rather than going back empty, they go back filled with recyclables," Pedroza says.

China takes America's trash as raw material to build cardboard and packaging. China gets the better deal here: They pay very little for items that cost the U.S. a lot. And the environmental impact of long-distance shipping isn't great.

The folks at Puente Hills decided that if they couldn't significantly decrease the trash produced, they could at least tap into an important resource: the methane gas emitting from the decomposing trash. Since the 1980s, that gas has gone to the onsite Gas-to-Energy Facility.

From Garbage To Art: How To Change The World

"This is where we're taking the landfill gas and using it as a heat source for the creation of steam," Pedroza says. "The steam is then used to turn a turbine, and then from there we produce 50 megawatts of electricity."

That's enough to power about 70,000 homes in Southern California. The facility became a model for other landfills across the country.

It will continue to operate for a number of years despite the landfill closure — there's still plenty of gas that's being extracted.

Humes has his reservations about the efficiency of the process.

"The problem is that's still a lousy way to make energy, because you are ending up spending 100 times more energy to produce the fuel — the trash — than you're getting back from it," Humes says.

But the quest to convert trash to energy is constant.

"Plasma gasification is using intense heat to essentially explode the molecules that make up a potato chip wrapper ... into its very basic molecular components," Portz says. Those atoms get transformed into synthetic gas, which can then be used for fuel.

But Portz says the technology is expensive and still being developed. And even with new technologies, many experts say it will be tough to ever eliminate landfills.

Back at Puente Hills Landfill, with the mountain of garbage now enclosed, it's hard not to think of the compacted layers of history. The area includes burned-down storefronts from the riots after the Rodney King verdict and building rubble from major earthquakes. It makes Puente Hills engineer Bill Gross reflective.

"It's just ... to me, just a little bit of a letdown," Gross says. "I guess I'm just getting used to it. It just really felt different closing this place."

But perhaps there's no need to be too nostalgic: The Sanitation District already has plans underway for a new and even larger landfill in a remote area of the desert.