Accessibility links
Can Exercising Seniors Help Revive A Brooklyn Neighborhood? Improving the lives of the poor can take many forms. One group of senior citizens in New York City meets regularly to stretch their legs and in the process reinvigorate their community. 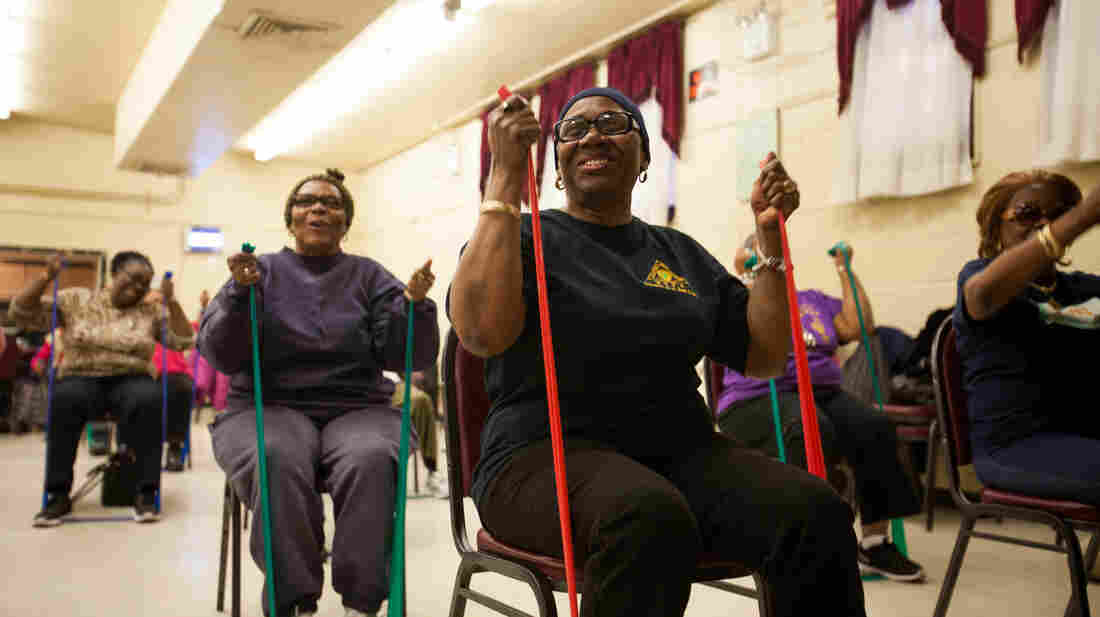 Linda Beckford (right) exercises as part of a walking group that tries to make their neighborhood a better place to live. If nothing else, the seniors feel more confident about going outside. Quoctrung Bui/NPR hide caption 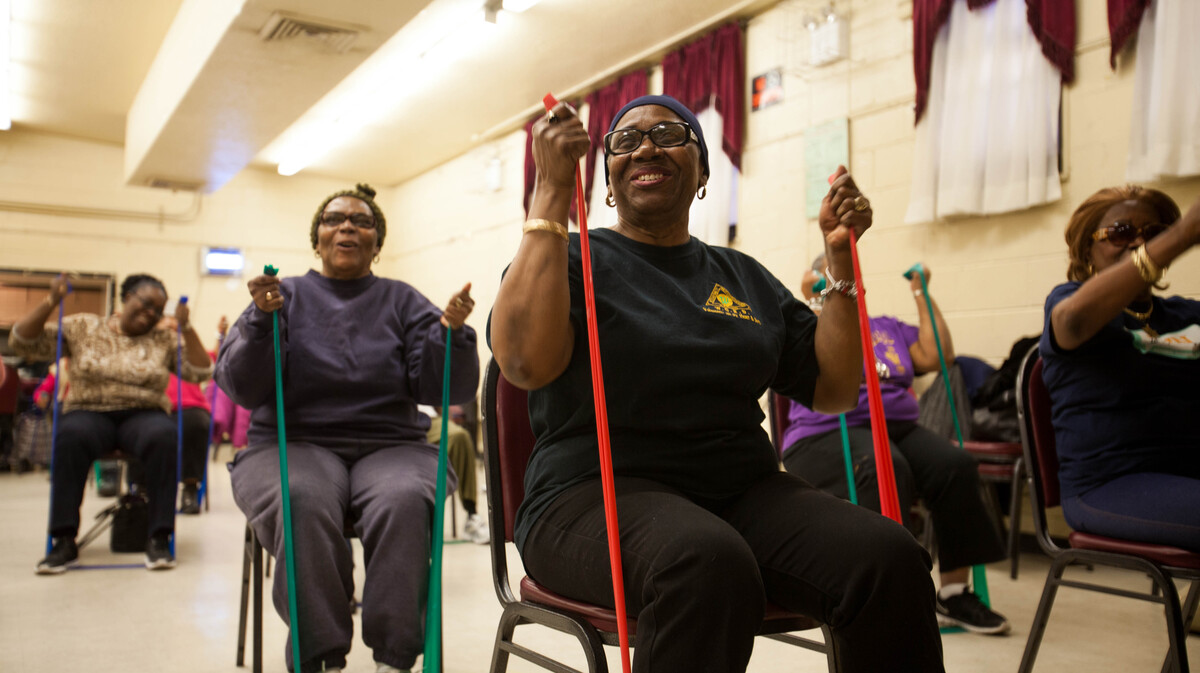 Linda Beckford (right) exercises as part of a walking group that tries to make their neighborhood a better place to live. If nothing else, the seniors feel more confident about going outside.

The Brownsville neighborhood of Brooklyn, N.Y., is known for many things, among them huge public housing projects, extremely high poverty and crime. Last summer, a one-year-old boy was shot in the head and killed as he sat in a stroller in the neighborhood.

But that's one side of life in Brownsville. Down the street from that murder, on weekday mornings, is another side.

At the local community center, about 40 older women can be seen dancing their hearts out, wiggling their hips and pumping their fist to the sounds of "Do You Love Me?" The women are decked out for exercise, wearing sweat pants, T-shirts and knit caps.

The ladies have just finished their twice-weekly exercise class. Usually, they go outside to walk and dance around the neighborhood, but today it's too cold so they're staying in.

It might not look like it but this class and walking club of women, and sometimes men, is part of a larger effort to fight poverty and improve impoverished communities. It was started by a nonprofit, Community Solutions. People there think that one way to help places like Brownsville is to get residents to look out for and care for each other.

Seventy-year-old Linda Beckford, who's lived in Brownsville for 27 years, says the walking club has done a lot of good for the community. Without it some of these seniors would be stuck at home, isolated and alone, she says.

Instructor Sid Howard knows how important such activities are. He's a senior himself, 74 years old, and a coach with New York Road Runners. He's won several world titles for running over the years and tells the women if "they don't use it, they'll lose it."

Howard starts his classes off slowly. Some of the seniors use wheelchairs or walkers; one woman is 97 years old. At first, everyone sits in chairs to warm up, gripping rubber exercise bands as they raise and lower their arms. Howard teases the women into doing as much as they can. 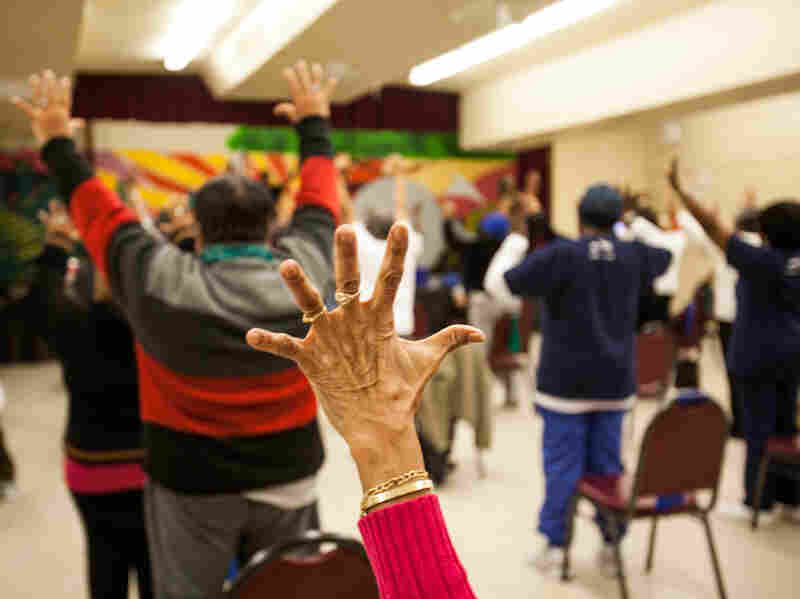 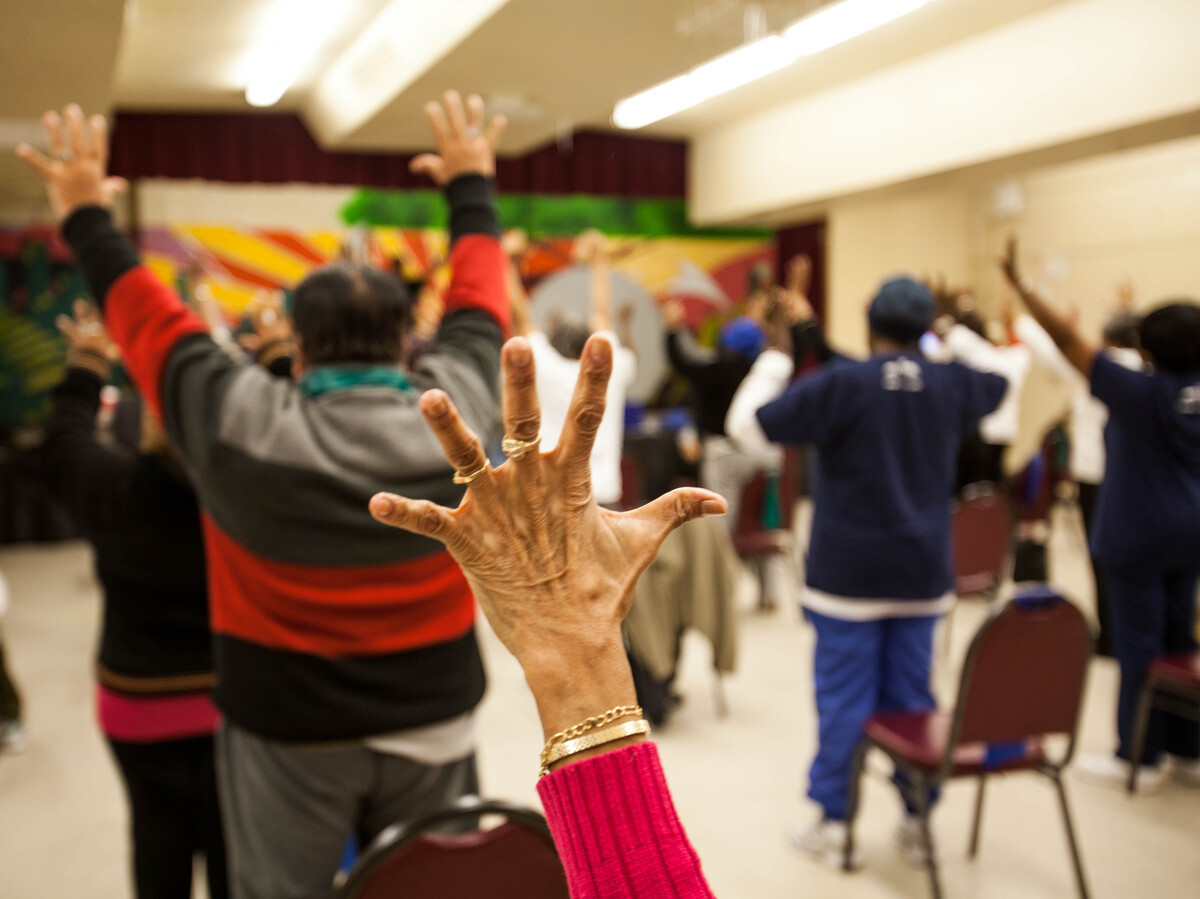 A Brownsville, N.Y., walking club gets seniors socializing with community members and stretching their legs.

In this class, the seniors say they use muscles they haven't used for years. It makes them feel stronger, confident and less vulnerable.

Delores Stitch, who refuses to give her age — she's known here as the Diva — says these seniors get more respect now from people in the neighborhood, especially the young people.

"They stop in and speak to us," she says. "The kids, the young adults, the middle aged."

She stops, then whispers that the neighborhood drug addicts talk to them as well. This summer, seniors from the walking group will also go to a fresh produce stand down the block, run by local teens, another program designed to help reinvigorate the neighborhood.

Sixty-five-year-old Gwen Grant says that despite its bad reputation, Brownsville can be a good place to live and that there's lots of promise here.

"As seniors, we have to be interested in the kids. Don't just say, 'They're bad, they're troublesome,' " she says. "We have to give them what we know. We can also learn from them as well."

Hopefully everyone benefits, Grant says. And if nothing else, at least the seniors are having a good time.