Accessibility links
No Easy Answers For DUI Concerns As Marijuana Gains Support As more states legalize pot for medical and recreational use, law enforcement and health officials want to deter driving under the influence. But the task isn't as clear cut as it is with alcohol. 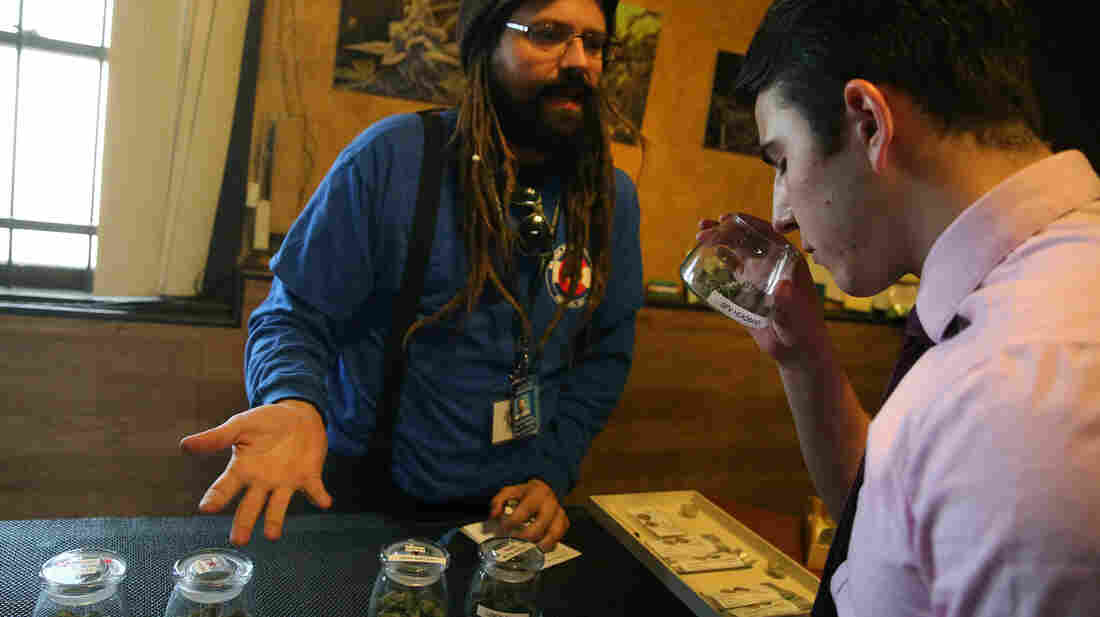 A customer smells a strain of marijuana while being helped by employee Billy Archilla inside the retail marijuana shop at 3D Cannabis Center in Denver. Brennan Linsley/AP hide caption 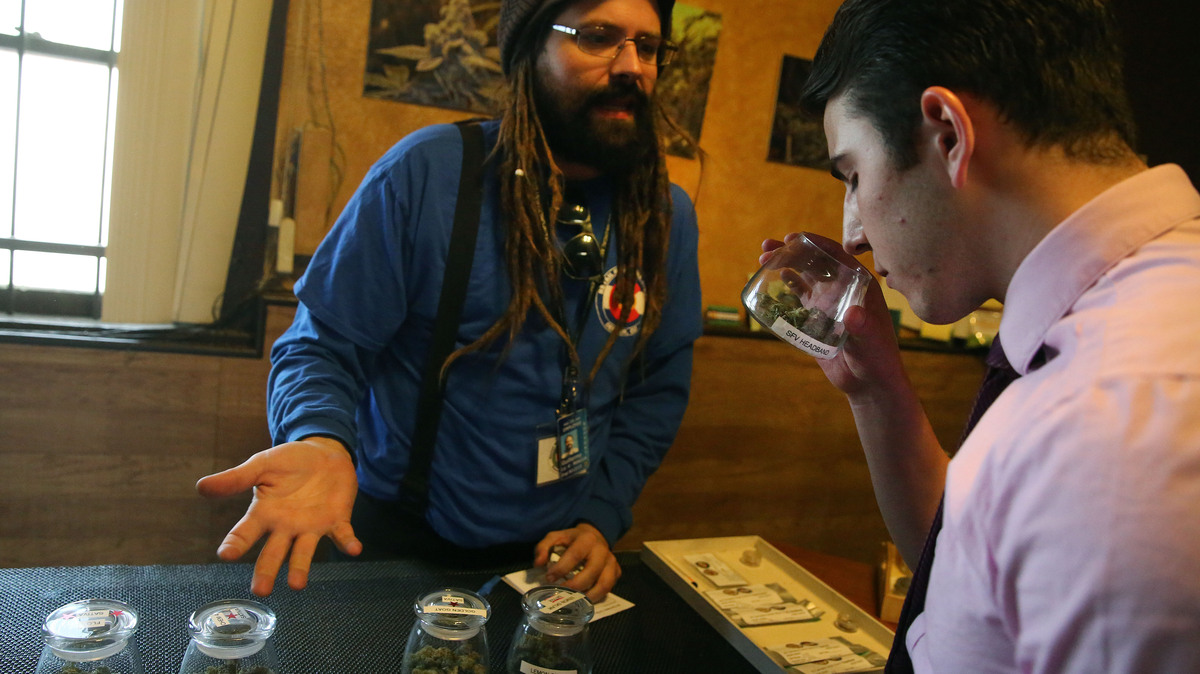 A customer smells a strain of marijuana while being helped by employee Billy Archilla inside the retail marijuana shop at 3D Cannabis Center in Denver.

The Lodo Wellness Center in Denver has been selling medical marijuana for several years. But since Jan. 1, when marijuana in Colorado officially moved from underground to behind the counter, the center has also been selling legal, recreational pot.

A majority of Americans now say they support full legalization, and the trend is spreading to other states.

Meanwhile, the public health community is warning of a potential safety problem: more people driving while stoned. But health officials and law enforcement don't yet have the data or the tools to address the concern.

Inside Lodo Wellness Center, shoppers don't seem particularly worried about getting behind the wheel with pot in their systems. 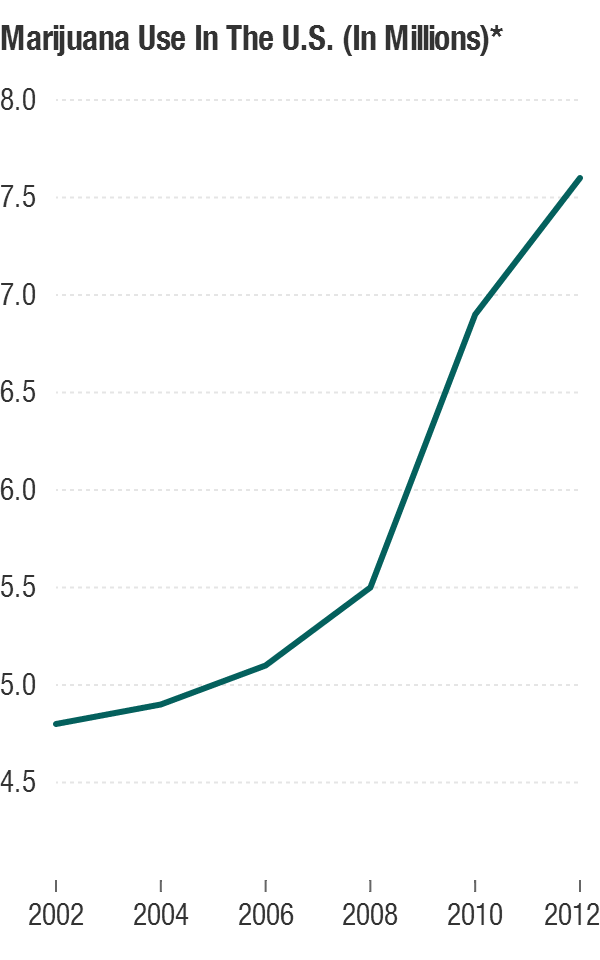 *Self-reported use of marijuana on 20 or more days in the past month. 2012 National Survey on Drug Use and Health hide caption

toggle caption
2012 National Survey on Drug Use and Health

"You could smoke about an ounce and still have your motor skills," says 39-year-old Dante Cox. "When it comes to one shot of alcohol, all that goes out of the window."

Like Cox, several others say it's OK to smoke before driving, and definitely safer than drinking and driving.

For advocates of traffic safety, their words are concerning.

"I think this is the next big issue in highway safety," says Jonathan Adkins, executive director of the Governors Highway Safety Association. He tells NPR's Arun Rath that there's a prevalent feeling in American culture that marijuana is no big deal.

"Well, it is a big deal if you use it and then get behind the wheel," he says. "We need to have the same cultural intolerance for marijuana use behind the wheel as we do with alcohol."

Alcohol-related crashes still kill around 10,000 people a year, and research clearly shows how drinking alcohol affects driving. The impact of marijuana is much less clear.

"We have so many processes in our brain that help us to do a complex behavior of driving, and under the effects of marijuana, we just don't perform as well," she says.

After using marijuana, Huestis says, people generally have more trouble staying in lanes, they struggle to do multiple tasks at once, and there's a real problem maintaining concentration on long, monotonous drives.

But does that translate into more accidents? Studies of the crash risk associated with marijuana have produced mixed results, says Anne McCartt, senior vice president for research at the Insurance Institute for Highway Safety.

"Not only do we not have consensus on the risk associated with the presence of marijuana — we don't have information on the crash risk for different amounts of marijuana," McCartt says. "We don't even have good information on how many drivers involved in fatal crashes test positive for marijuana. So there's a lot we don't know."

McCartt says the evidence so far suggests that alcohol has a stronger effect than marijuana on crash risk, and that there is simply a larger body of research on the strong association between blood-alcohol concentrations and crash risk.

"We've used that science, for example, to enact in all 50 states laws that make it illegal to drive with [blood alcohol contents] of 0.08 percent or higher," she says. "We don't have comparable information on marijuana."

As marijuana use becomes more accepted in the U.S., McCartt says, the public safety issue is concerning. As a researcher, she says, it's frustrating not to have the science needed to craft effective, enforceable laws for drugs, including marijuana.

Even with laws establishing a specific limit, police might not have a way to enforce them. For alcohol, police around the country carry hand-held breathalyzers. But coming up with a similar test for marijuana is not quite as easy.

For one, the alcohol content of, say, a Budweiser is on the label. But it's much more difficult to know the potency of a wide variety of marijuana products.

Another complication is marijuana's main psychoactive ingredient, THC. It can linger in the body long after the initial high.

"THC is a molecule that really loves human fat, and when you ingest it, it sticks in the fat, and then it slowly seeps out over the course of a week, or a month if you are a heavy user," says Timothy Fong, an addiction psychiatrist at the University of California, Los Angeles.

The most reliable test for THC is the blood test. A few states, like Washington and Colorado, have even established a kind of legal limit of marijuana in the blood: 5 nanograms of THC per milliliter.

But performing that test often requires that police drive a suspect to a hospital. And Fong says it's tough to interpret exactly what those tests mean for driving ability.

"Most of the marijuana testing has been done in human laboratories, and there you get a wide variety [of reactions]," he says. "So if you take 100 people and have the same blood level of marijuana, you'll have 100 different reactions."

California, the first state to legalize medical marijuana, recently conducted a roadside study at night, finding around 7 percent of drivers had marijuana in their systems.

The Green Rush Begins: Investors Get In On Pot's Ground Floor

Los Angeles is now at the forefront of law enforcement's response. The city has a federal grant to try out a new roadside drug test: oral swabs. City Attorney Mike Feuer calls the technology "the wave of the future."

"This is a technique under which, in the field, at the time of the traffic stop, an officer can test the saliva of the driver and get an immediate result as to whether there are drugs present in his or her system," Feuer says.

Feuer says the admissibility in court of the swabbing hasn't been tested in California but is likely to be tested in the coming months or next year. Legislation regarding the swabs could be down the road as well, he says.

The goal of all of this, Feuer says, is to assure that there is an effective means of determining whether a driver is impaired, not just for prosecution but also to prevent people from driving under the influence in the first place.

"The more commonly known it is that we have a quick and effective technique for determining that, the more I hope people are deterred from getting behind the wheel with drugs or alcohol in their system," he says.

Advocates in favor of marijuana legalization say they agree that people should know their limits and should not drive while impaired. But they're concerned that police officers will substitute this new technology — and an "arbitrary" legal limit — for their own judgment.

"I think that people want to have a clear-cut, black-and-white solution," says Mason Tvert, the communications director for the Marijuana Policy Project, a pro-legalization group. "They want a specific number that we can use to just say that this person is impaired or not. Unfortunately, it's a little more of a gray area than that."

Tvert says simply having a number attached to "impairment" could result in people who are perfectly sober being arrested and charged. He suggests that the law enforcement official's judgment should also come into play.

A bigger concern for Tvert is not the number of pot smokers getting behind the wheel but "excessive and overzealous reporting" on the subject. He does agree, however, that driving under the influence of marijuana is something that needs to be addressed and discouraged.

"We allow adults to use alcohol responsibly, and we punish adults if they use it irresponsibly, and that includes driving while drunk," he says. "We should be doing the same thing with marijuana."

It's in that area that Tvert and Feuer share some common ground.

"I'm optimistic that as the debate around legalization of marijuana continues in this country, there will be no debate ... around the notion that we should be educating the public about the fact that driving while impaired could lead another family to suffer a loss from which they can never recover," Feuer says.

That legalization debate is continuing this year: It's likely that marijuana initiatives will be on the ballot in Alaska and Oregon. As the momentum increases for marijuana legalization, police and lawmakers say they have to respond, even with so much still unknown.