Accessibility links
Rosie Perez: 'I Refused The Limitations That Were Set Upon Me' Before Rosie Perez was an actress or Soul Train dancer, she survived an abusive childhood. Perez talks about that in her new memoir, Handbook for an Unpredictable Life. 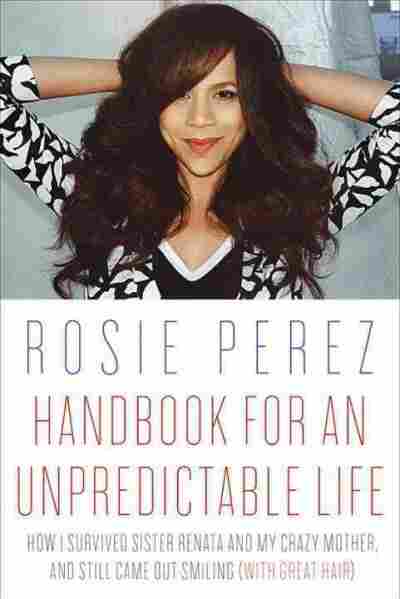 Handbook for an Unpredictable Life

How I Survived Sister Renata and My Crazy Mother, and Still Came Out Smiling (With Great Hair)

Title
Handbook for an Unpredictable Life
Subtitle
How I Survived Sister Renata and My Crazy Mother, and Still Came Out Smiling (With Great Hair)
Author
Rosie Perez

Actress Rosie Perez first broke into show business in the 1980s as a dancer on Soul Train. She then became a choreographer for the likes of Janet Jackson, Bobby Brown and LL Cool J.

Perez made her film debut in Spike Lee's Do The Right Thing, followed by White Men Can't Jump. She earned an Oscar nomination for the 1993 film Fearless.

Before her career took off, Perez suffered a very difficult childhood. Her mentally ill mother left her to be raised in a convent at age 8. Years of abuse followed.

Perez shares her personal story in a new memoir, Handbook for an Unpredictable Life: How I Survived Sister Renata and My Crazy Mother, and Still Came Out Smiling (with Great Hair).

On overcoming her tough childhood

For some reason, I always thought I was special. And for some reason, I always thought that I had a purpose in life — that I was supposed to contribute to the world. And I just refused to accept the status quo. I refused to accept a slap in the face by a nun. I refused to accept being punched in the head by my mother repeatedly. I just refused all these things. I refused the limitations that were set upon me because I was a girl of color, because I had an accent, because I was poor. Because I felt like I have an agenda to accomplish, and I can't do it with all of this that I'm experiencing. So therefore, I have to stay focused.

On why she never spoke out before

I didn't want to tell because when I was a child, and kids would find out, I was judged. I was limited. I was thought of [as] less than. I was treated subpar. And I didn't want that to come into my adult life. I wanted to walk into a room and have a fair chance, a fair shot. In the real world if I was to come in and [say], "Oh yeah nuns were this, and yeah, I got beaten, and my mother beat me, and she was mentally ill, and I was abandoned," all of a sudden people [would] look at you in a certain way and pity you. And it's already difficult for a woman of color in the entertainment industry to achieve any type of success. So I felt if they knew this information, they would pigeonhole me that much more.

On her early dancing days

[Perez's aunt] said even as a little girl, I would stand up in the crib and scream at 3:30, because that's when my cousins would come home, demanding that they put on "I'm A Soul Man" by Sam & Dave. And I would hold onto the crib with one hand and do the hitchhiker with my thumb with the other hand. And when I would get tired, I would stick my thumb in my mouth and just suck until I caught my breath and then go back to dancing.