Accessibility links
Will Ukraine Do What It Takes To Unlock International Aid? Three months of protests have taken a toll on a Ukrainian economy that was already in distress. But many worry that as in the past, corruption and a lack of political will prevent meaningful reform. 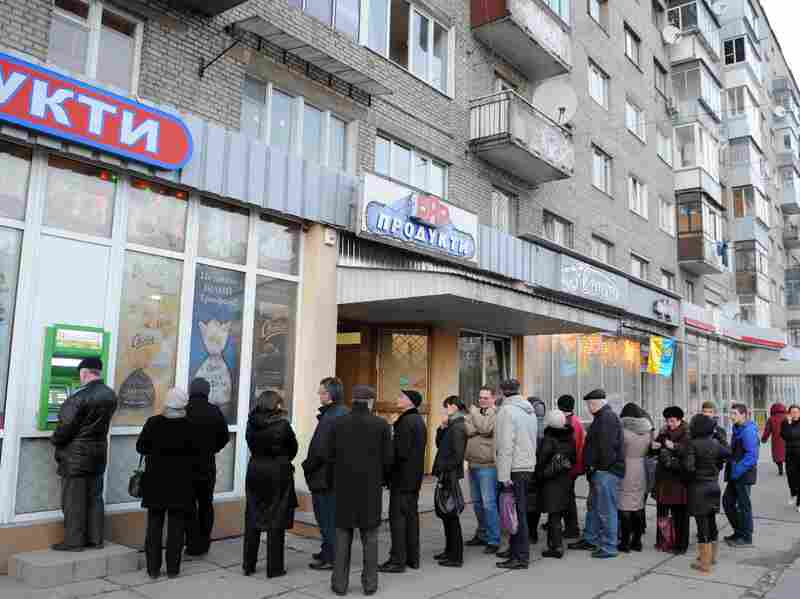 Ukrainians line up to get their money from a bank machine in the western city of Lviv last week. Clashes in Independence Square in Kiev and the resulting political turmoil caused a financial panic. AFP/AFP/Getty Images hide caption 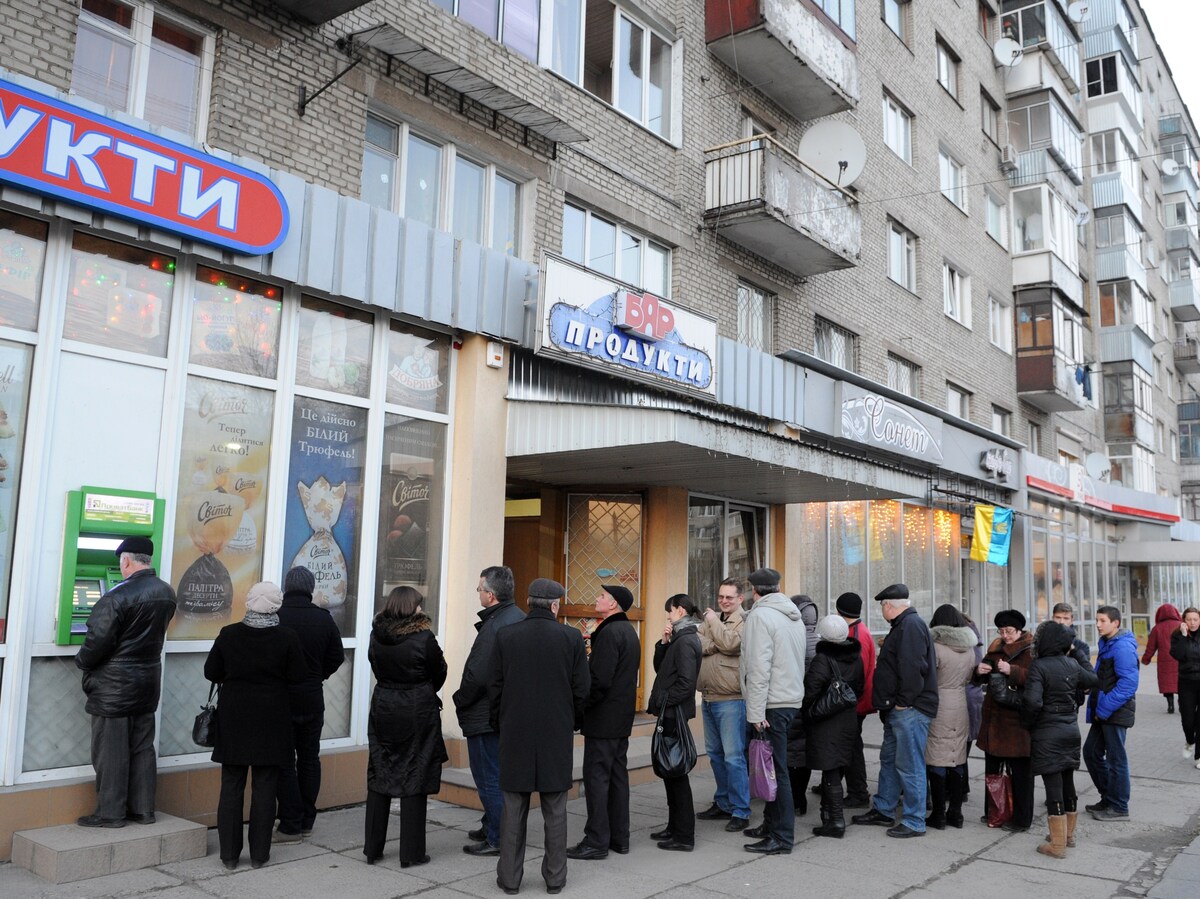 Ukrainians line up to get their money from a bank machine in the western city of Lviv last week. Clashes in Independence Square in Kiev and the resulting political turmoil caused a financial panic.

The United States, hoping to avert economic chaos in Ukraine, is prepared to send financial support to supplement aid from the International Monetary Fund, the White House said on Monday.

"The United States, working with partners around the world, stands ready to provide support for Ukraine as it takes the reforms it needs to, to get back to economic stability," White House spokesman Jay Carney told a news briefing.

After three months of street protests and the ouster of President Viktor Yanukovych, the U.S. and others are now urging Ukraine's interim leaders to start talking to the IMF about just what reforms are needed to unlock international aid.

Polish Foreign Minister Radek Sikorski took the lead in negotiating an end to the political standoff in Kiev, the Ukrainian capital, last week. He says that the only way for Ukraine to succeed now is to get its economy in shape. To do that, he says, the country needs the IMF.

"We need to help Ukraine get back within the IMF program so that she may receive huge macroeconomic assistance," he says.

The U.S. Treasury has sent some of its officials to Kiev this week, to work along with U.S. Deputy Secretary of State Bill Burn to sort out a path to stability with the help of international funding.

But it may be a tough mission because the IMF doesn't have a good history in Ukraine, says Stephen Sestanovich, a senior fellow at the Council on Foreign Relations.

"The IMF has — over the past 20 years — sent its senior people to Kiev many times, and they've sort of stopped going because they've been exasperated by what they've heard there," he says.

What they heard about was corruption and a lack of political will to reform the economy.

Anders Aslund, a longtime Ukraine analyst at the Peterson Institute for International Economics, believes this time could be different because the situation is so critical. He estimates that Ukraine needs an infusion of $15 billion — and soon.

Aslund says Ukraine needs to allow its currency to fluctuate, raise gas prices and cut spending. But there is one big problem.

"As yet, we don't know where Russia will come in," he said. "It's extremely important that the U.S. and the European Union act through direct contacts with Moscow."

Russia wants Ukraine to join a customs union with other former Soviet states rather than look to the EU for closer economic ties.

But the United States and EU hope Russia will allow Ukraine to have a relationship with many economic partners, arguing that it's in Russia's economic interests to act cooperatively, says Matthew Rojansky, director of the Kennan Institute at the Wilson Center.

"Stability and recovery of the Ukrainian economy benefits Russia because of the degree of investment in Ukraine," Rojansky says. "If Ukraine is able to produce and send products to Russia, and if Ukrainians are able to buy Russian products, that's good for the Ukrainian economy, and Russia needs that right now."

But unlike Russia, which has clear economic interests at stake, leaders in the EU and the U.S. may have a tougher argument persuading lawmakers to spend money on helping restore the economy in Ukraine, he says.

"Members of Congress will get very excited and issue statements about Ukraine, but there's a long distance between that and actually voting to open the floodgates of American assistance at a time when resources are tight all around," Rojansky says.

But the U.S. and its allies can't afford to put off dealing with Ukraine for too long, warns Jean-Claude Trichet, the former head of the European Central Bank. He told a group of top economists Monday that political leaders in the West need to understand that Ukraine's political meltdown could turn into an "extraordinarily dangerous" threat to global stability and economic recovery

"We should not take lightly the Ukrainian problem," Trichet said at the National Association for Business Economics convention in Arlington, Va.

Ukraine's political chaos might rekindle hostility between Russia and the West, Trichet said. And such hostility could lead to military conflicts and instability in a region still struggling with recession and huge government debt problems.

Ukraine must emerge from this crisis with "a good relationship with all of its neighbors," which include Russia and EU members such as Poland, Hungary, Slovakia and Romania, he said.