Accessibility links
The Business Of Frats: Shifting Liability For Trauma And Injury A report in The Atlantic looks at the power that fraternities have at universities and the ways in which the organizations protect themselves when serious legal problems arise. 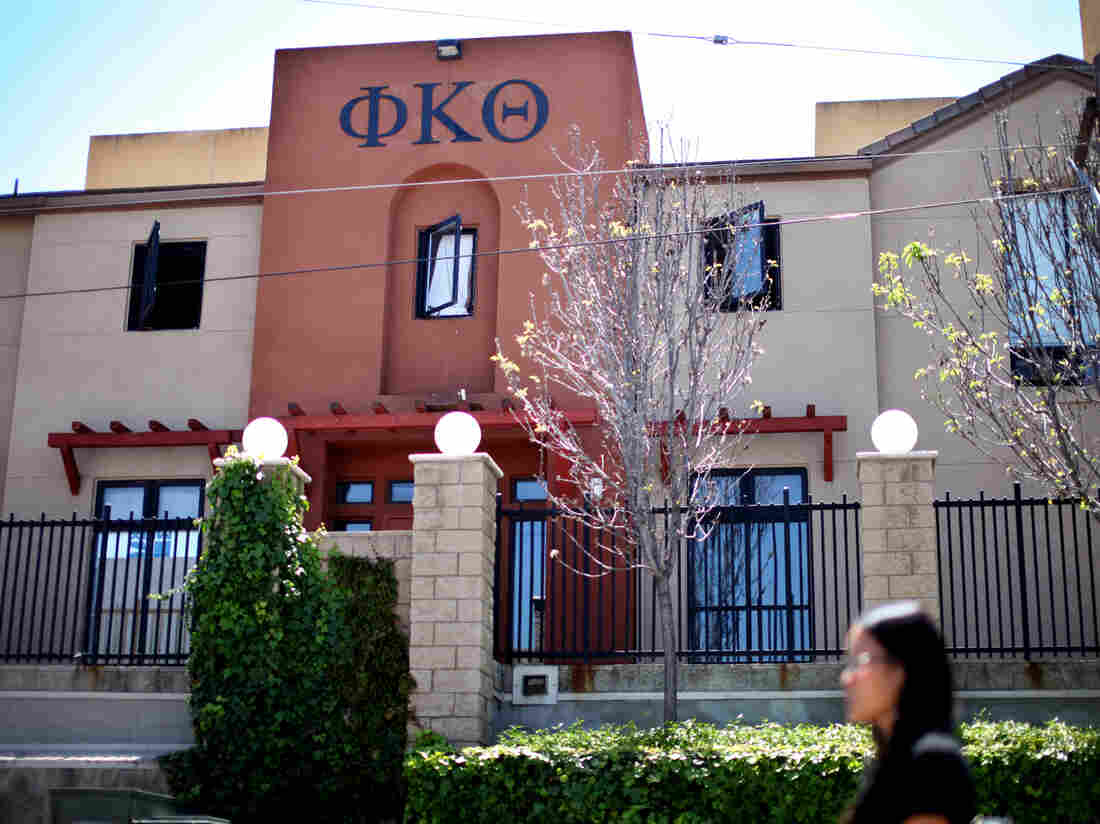 Students walk past the Phi Kappa Theta fraternity house at San Diego State University after news that a student had died there on April 20, 2012. Sandy Huffaker/Getty Images hide caption 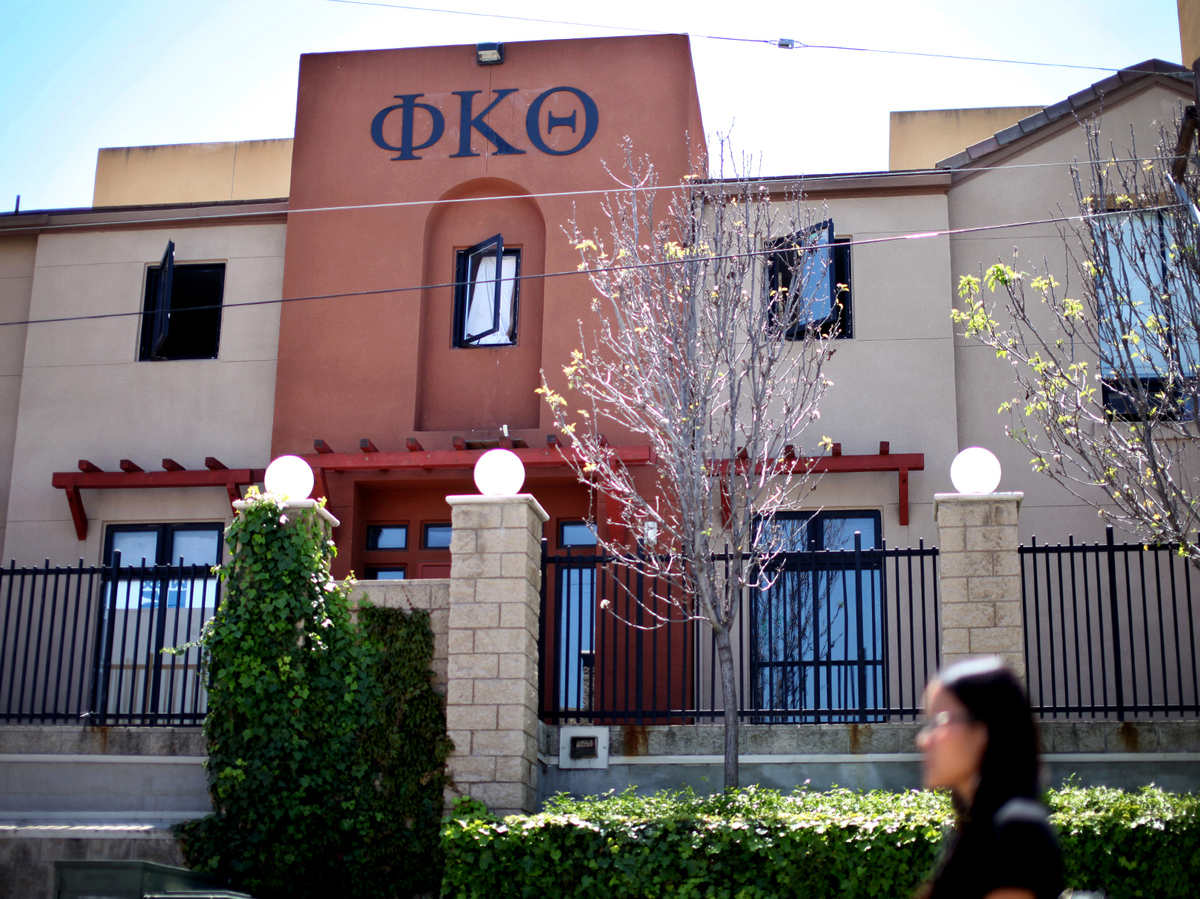 Students walk past the Phi Kappa Theta fraternity house at San Diego State University after news that a student had died there on April 20, 2012.

For those of you keeping track of the headlines detailing sexual assault and hazing at frat houses, it may come as no surprise that fraternities have a dark side. Caitlin Flanagan, a writer at The Atlantic, spent a year investigating Greek houses and discovered that "the dark power of fraternities" is not just a power over pledges and partygoers but one held over universities as well.

"Fraternities are now mightier than the colleges and universities that host them," she writes. Alumni do tend to give generously to their alma maters, yes, but it's more than that. The American college system is slave to its need for a continual flow of students, Flanagan says. How else to persuade underprepared, soon-to-be-loan-ridden students to attend than by marketing the experience as a major party? Colleges compete for these students with perks, frats and all their glory among them.

Flanagan's piece looks deeper into the tragic and unsavory practices rampant in Greek houses and the ways in which they protect themselves when serious problems arise.

On the role of fraternities at colleges today

One of the biggest roles that I think people will be surprised to learn is they're the largest single provider of undergraduate housing in the United States. One out of every eight students who live on campus lives in Greek housing. So that's just this tremendous amount of housing that colleges don't have to pay for, they don't have to maintain, they don't have to insure. And it represents one of the many ways that colleges, as much as they're bedeviled by fraternities, are deeply dependent on that.

The Atlantic: The Dark Power Of Fraternities

On how fraternities are insured

They don't get insurance. They self-insure. What that means, really, is they needed to put aside their old rivalries and band together and create a vast sum of money. The main one is called the FRMT, Fraternity Risk Management Trust. No one knows how much money is in that. The closest I could get to the amount is that it is under $1 billion. And when a kid is injured, when somebody is killed, when somebody drinks himself to death, when a girl is sexually assaulted, the check ultimately comes from [the fraternities'] own pocket.

They may have a moral obligation to address it. They rarely have a legal obligation to address it. ... When you have the right to monitor student behavior, you have legal responsibility for it when something goes wrong. But nowadays because that policy ... has fallen, the college is not responsible for what students do on their own time. If the kid slipped and fell at 7-Eleven, the college wouldn't be responsible. And similarly, if he or she slips at the fraternity, which is a private society in a privately owned building on privately owned land, the university has no responsibility.

The most expensive part of joining a fraternity is the portion of your dues that go to fraternity insurance. And I think a lot of parents feel calmed by that. What will happen is, if Johnny has made any mistake the night that there's a big incident, if he was downstairs at the fraternity having beers and upstairs someone is getting sexually assaulted, and he's under 21, he's going to be a named defendant. He'll get dropped from his fraternity insurance in a second. The fraternity will probably drop him from the fraternity. ...

On what fraternities can do to fix some of these problems

Everyone knows exactly what they need to do because there have been very careful studies on this. If you take alcohol out of the fraternity house, if you make it an alcohol-free residence, the number of claims drops by 85 percent and the severity of those claims, the dollar amount of those claims, drops by 95 percent. You show me any other industry that would have a chance to drop the number of claims by 85 percent and the severity by 95 percent by making a single change. If the fraternities are serious about cleaning up their act, that's the change they need to make, and it's a very painful one. It will probably devastate them, in terms of the numbers of kids who want to join, because pumping the keg is part of being in a fraternity in American culture. But that's the change that would clean the system up.