Accessibility links
Desk, Set: Seth Meyers Lands In Late Night Very Safely Seth Meyers began his run as the new host of NBC's Late Night with such a polished, neat, safe premiere that it's hard to know where he goes from here, says critic Eric Deggans. 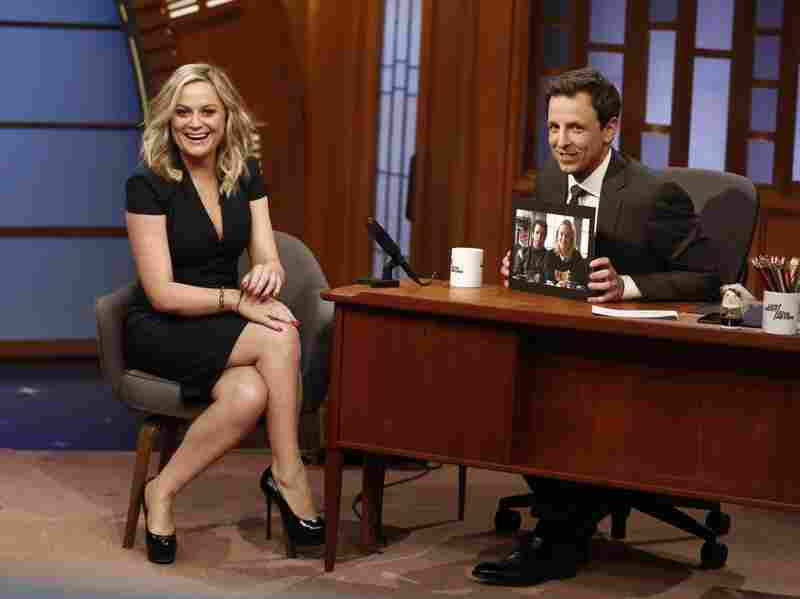 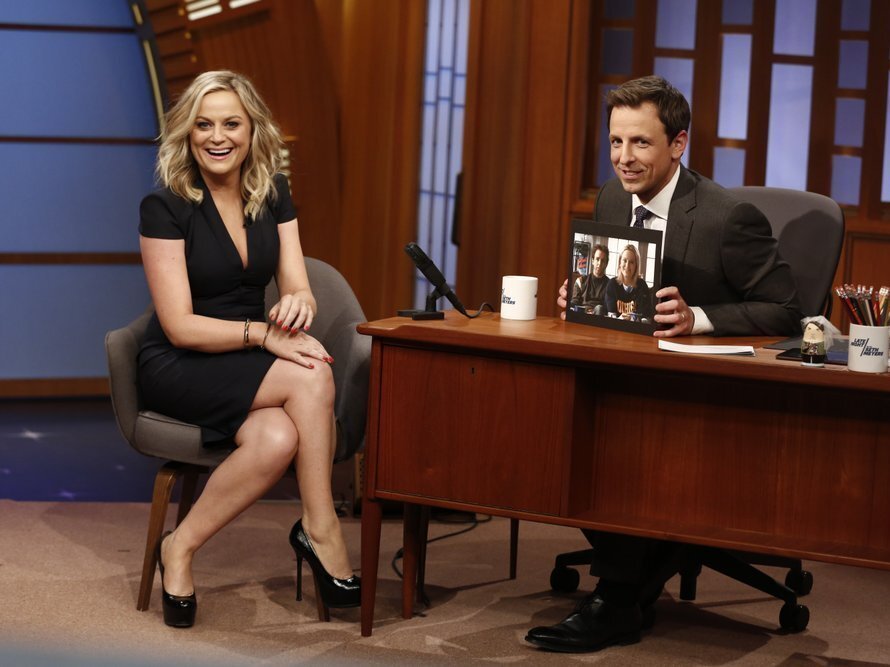 Actress Amy Poehler during an interview with host Seth Meyers on the premiere of Meyers' Late Night.

The best thing about late-night TV can also be the trickiest.

On the fringes of TV's big stage, shows airing after midnight can be a home for invention; a place where quirky personalities and developing talent can try things with the potential for massive success or demoralizing failure with relatively low stakes.

That history — and its potential for greatness — may be one reason why Seth Meyers' funny, well-paced, completely professional debut Monday as the new host of NBC's 12:35 a.m. Late Night show nevertheless left me a little underwhelmed.

Like a well-made dish with little spice, Late Night with Seth Meyers was a tidy hour of entertainment that took few risks and felt like a safe pitch right across the plate from a guy who spent 13 years honing his craft as a performer and head writer in Saturday Night Live's sketch comedy factory.

Taking over the program for new Tonight Show host Jimmy Fallon, Meyers made sure he was surrounded by friends in his inaugural episode. From bandleader Fred Armisen – talk that he's "curating" the house band sounds like showbiz speak for "he'll play on the show when he's not doing films or other projects" – to first guest and longtime pal Amy Poehler, Meyers stacked the deck with callbacks to his SNL past.

Indeed, a lot of the show's early jokes, including a monologue riffing on the day's news and a bit with Armisen joking about a fake History Channel series he was developing, felt a little like retooled "Weekend Update" bits, delivered from a sparkling new set with no over-the-shoulder news graphics. ("The brassiere turns 100 years old this week," Meyers noted in one joke which felt particularly SNL-friendly, "and so does everyone who still calls it a brassiere.")

Still, Meyers kept the pace brisk, with an Olympic wrap-up showing what the games might have looked like through host Bob Costas' pink eye infection and a visit from Poehler that felt a lot like watching the two old friends kibitz over coffee.

"I want to say something to George Clooney that no woman has ever said to him," Poehler offered, after Meyers asked about a prank Clooney pulled on her and fellow SNL alum Tina Fey after they cracked a tough joke about him during the Golden Globe awards. "George, please stop....stop what you're doing."

Their easy camaraderie carried over to the show's second guest, Vice President Joe Biden, who has his style as America's gladhanding "Uncle Joe" down pat. Biden joked with Poehler and Meyers about his cameo appearance on Parks and Recreation and why engineers won't let him touch anything when he hangs out in the control room of commuter trains.

It was a great first episode, especially compared to the uneven debuts of predecessors like Fallon and Conan O'Brien, who took much longer to hit their comedic stride (O'Brien famously spent more than two years cranking out mediocre episodes before he finally found his comedy mojo.)

But I'm old enough to remember when David Letterman first took over that piece of late-night real estate, challenging audiences with interviews designed to genuinely embarrass or annoy celebrity guests and bits that sometimes had no purpose other than to offer an odd, unexpectedly jarring moment.

Over on CBS, Craig Ferguson built a unique, completely personal Late Late Show around his relationship with the camera lens, jettisoning a scripted monologue early in his tenure while developing a style of baring his soul onstage matched only by Letterman himself.

Even O'Brien and Fallon found stronger, singular voices after stumbling a bit in the early going. Which leaves me to wonder where Meyers has to grow if he's already this polished on day one.

Cool as it was to see a confident, charismatic host take the reins at Late Night after years of bungled late-night transitions, part of me missed seeing a little grit there – a sense of reaching for comedy goals even the host can't articulate yet.

Sometimes, you can't really find something new without risking a serious failure first.