Accessibility links
Kitchen Window — Fat Tuesday: The Many Different Doughnuts Of Mardi Gras On the day of indulgence before the austere season of Lent, celebrate as you're meant to: with a hearty helping of dough and fat. 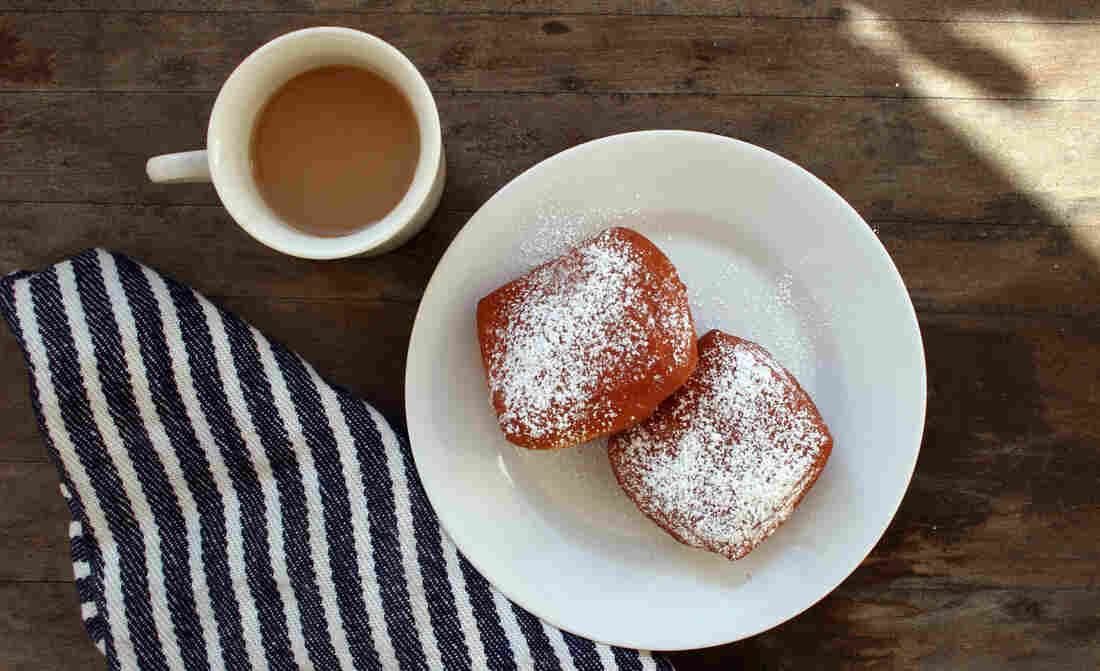 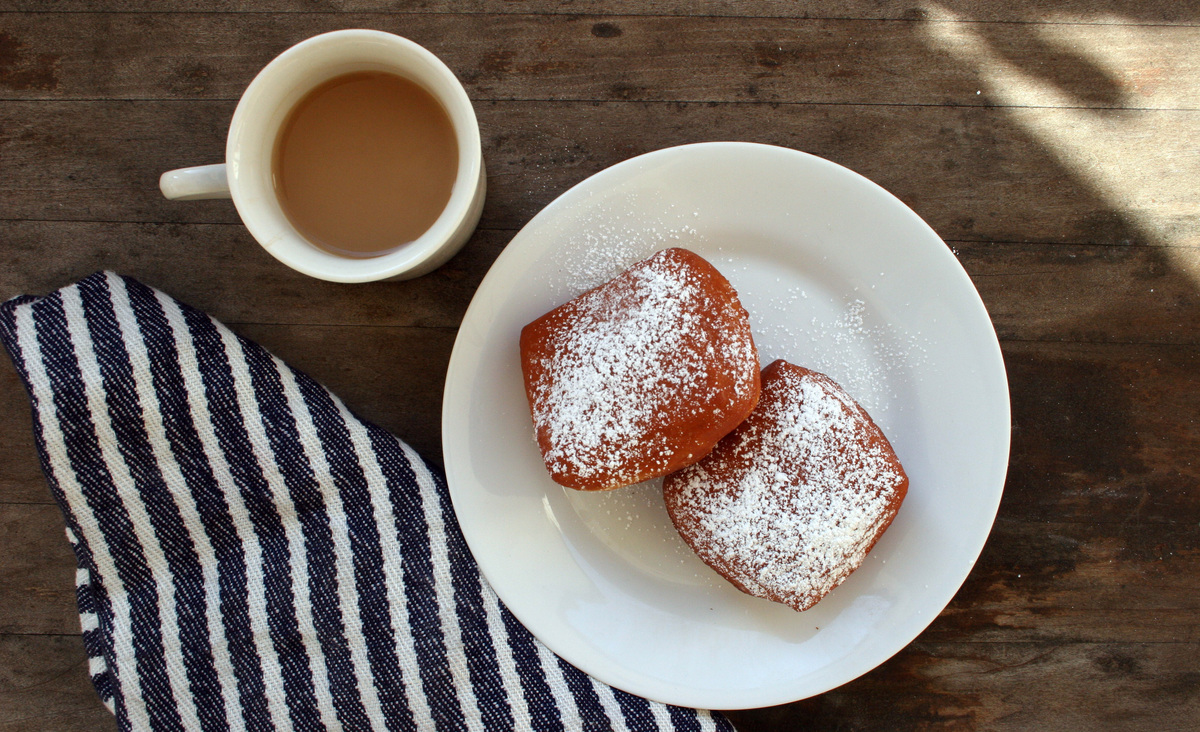 Get recipes for Paczki, Fasnacht, Beignets and Cenci.

The history of doughnuts is intrinsically linked to the celebration of Mardi Gras. "Fat Tuesday" — the Christian day of revelry and indulgence before the austere season of Lent — features dough deep-fried in fat as its main staple.

Among the first foods to be deep-fried were Roman scriblita, a precursor to today's doughnuts and fritters. Originating in the medieval era, most Christian European traditions have developed a version of fried dough for Shrove Tuesday (another name for the day before Lent starts). The rich treats presented a way to use up all of the butter, sugar and fat in the house prior to the self-denying diets of Lent. Traditionally it was an opportunity for indulgence, a day when, once a year, communities would go through the labor-intensive and expensive process of deep-frying in order to partake in a luxurious treat.

Emily Hilliard is a folklorist and writer living in Washington, D.C. She writes the pie blog Nothing-in-the-House and recently released the cookbook PIE. A Hand Drawn Almanac with illustrator Elizabeth Graeber. Find more of Emily's work on her website.

In Poland and Polish communities in the United States, such as in the Midwest, Fat Tuesday is given another name — "Paczki Day," referring to the dense yet puffy jelly-filled doughnuts enjoyed on the occasion. Paczki were traditionally filled with rose hip jam or a stewed plum concoction called powidla, though today they often contain a variety of different jams and custards.

The history of colonization and immigration from the "old world" to the new can be traced through the evolution of doughnuts such as paczki. These celebration foods were important, and were both preserved and altered as they interacted with new ingredients and other influences in their new homes

Portuguese malasadas, also enjoyed on Shrove Tuesday, or "Malasada Day," were another such confection. The raised doughnuts were brought to Hawaii by sugar plantation workers in the late 1800s. Though originally they had no holes or fillings, they have evolved there to include fillings with Hawaiian ingredients such as guava and coconut. They are also popular among Portuguese communities in New England.

The German take on pre-Lenten doughnuts are called fastnachts (or fasnachts), bearing the same name as the traditional Carnival celebration, which translates as "fast night." The golden-brown yeasted treats, related to bismarks and berliners, are also found in Pennsylvania Dutch and Moravian enclaves in the United States. (In Maryland, the same doughnuts are called kinklings.) Traditional fastnachts are fried in lard and, like malasadas, do not have a hole or contain filling. The Pennsylvania Dutch version often includes mashed potatoes in the recipe, making a heartier and denser doughnut — something to stick to your ribs until the end of Lent.

Beignets are the most widely known Mardi Gras doughnut. The recipe for the light and eggy pillows of fried dough was brought to Louisiana when French Acadians were deported there in the 18th century. But there is another, lesser-known Carnival doughnut in New Orleans — calas. Sweet, fried rice dumplings, calas originate from the West African enslaved people who were brought to the area in the late 1700s. The recipe was passed on among Catholic African-American families who served them at Mardi Gras and other celebrations, and they're making a comeback in New Orleans restaurants, where they're offered as both savory and sweet dishes.

As it goes with traditional recipes that have undergone many relocations, transitions and generations, there are many variations and not one definitive source for all of these varying Carnival delights. No matter which you chose, celebrate next Tuesday the way it's supposed to be — with a hearty helping of dough and fat.

Polish paczki are dense yet puffy fruit-filled doughnuts that have become a Fat Tuesday mainstay in Polish communities across the United States. They're traditionally filled with rose hip jam or stewed plums, but you can use your favorite jam. This recipe is adapted from Polish Heritage Cookery by Robert and Maria Stybel (Hippocrene, 2005). 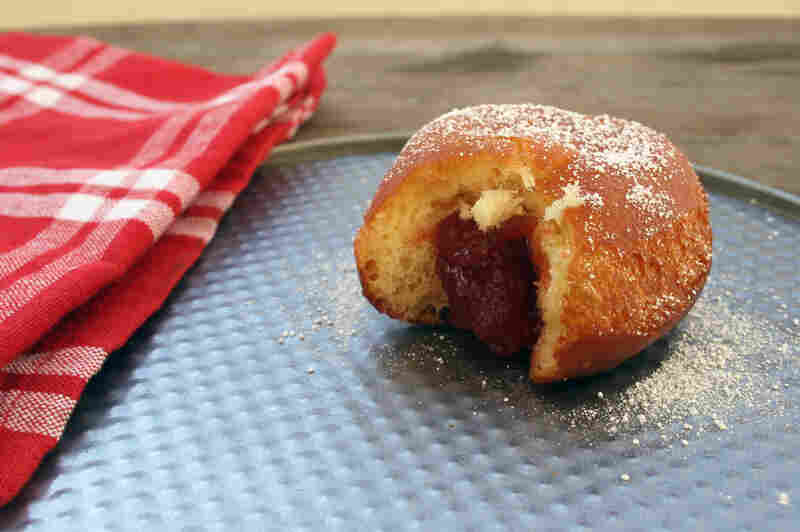 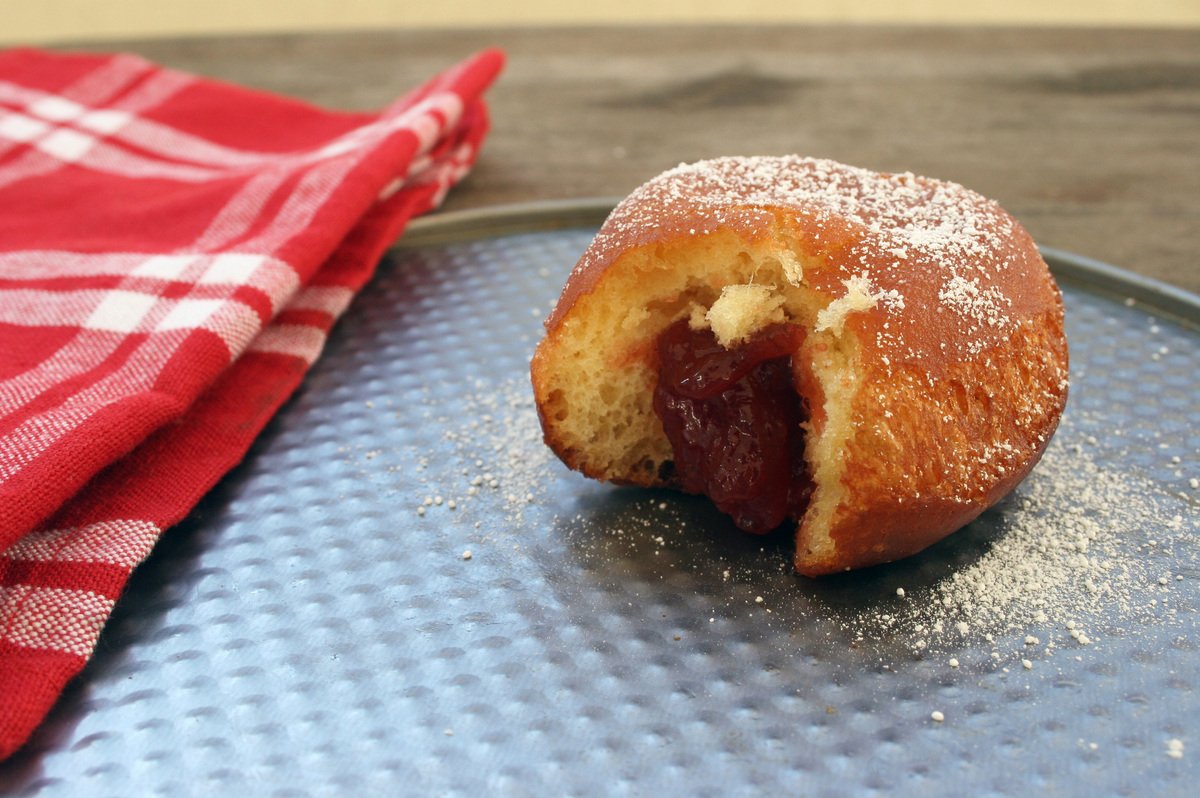 Canola oil for frying (or lard for a more traditional paczki)

In a medium bowl, dissolve yeast in lukewarm milk. Sift in 1 cup of the flour and the white sugar. Whisk together, cover and let stand in a warm place to let rise, 5 to 10 minutes.

Knead dough until it is smooth and glossy. Return to the bowl and mix in melted butter and continue to knead until dough no longer clings to the hands and bowl and air bubbles begin to appear.

Cover bowl with cloth and let rise in a warm place until doubled, about 1 hour. Punch dough down and let it rise again, about 45 minutes. Transfer dough to a floured surface, and roll out about 1/2-inch thick. With a biscuit cutter, cut into rounds. Place on a baking sheet covered with parchment paper and cover with a cloth while you heat the oil.

Pour oil into a deep, heavy saucepan with high sides, until about 3 inches deep. Bring to 360 to 375 degrees F over medium heat. Working in batches, fry paczki until puffed and golden brown, about 2 minutes on each side. Transfer to a paper towel-lined plate and let cool.

Once cool, insert a small hole into the side of the doughnut and fill with jam using a pastry bag. Dust with powdered sugar and eat fresh.

Fastnachts are yeasted doughnuts of German descent that bear the same name as the traditional pre-Lenten celebration, which translates as "fast night." They typically have no hole or filling and are dusted with powdered sugar. This recipe, like many Pennsylvania Dutch recipes for fasnacht, uses powdered sugar. 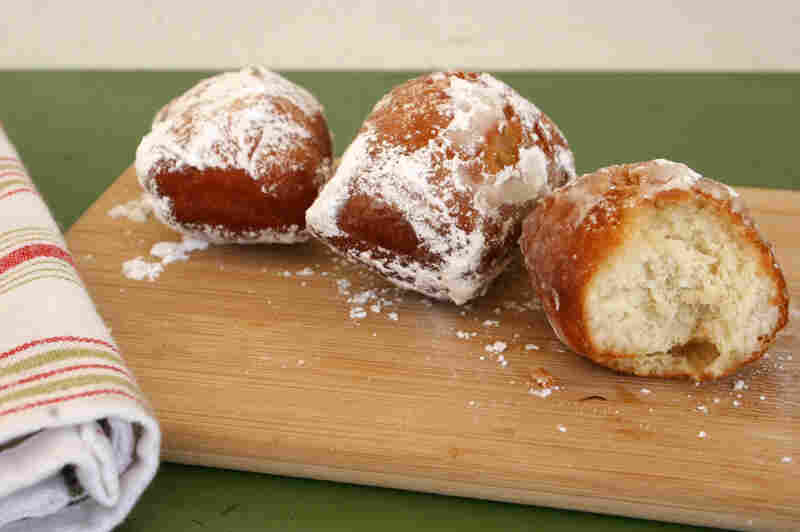 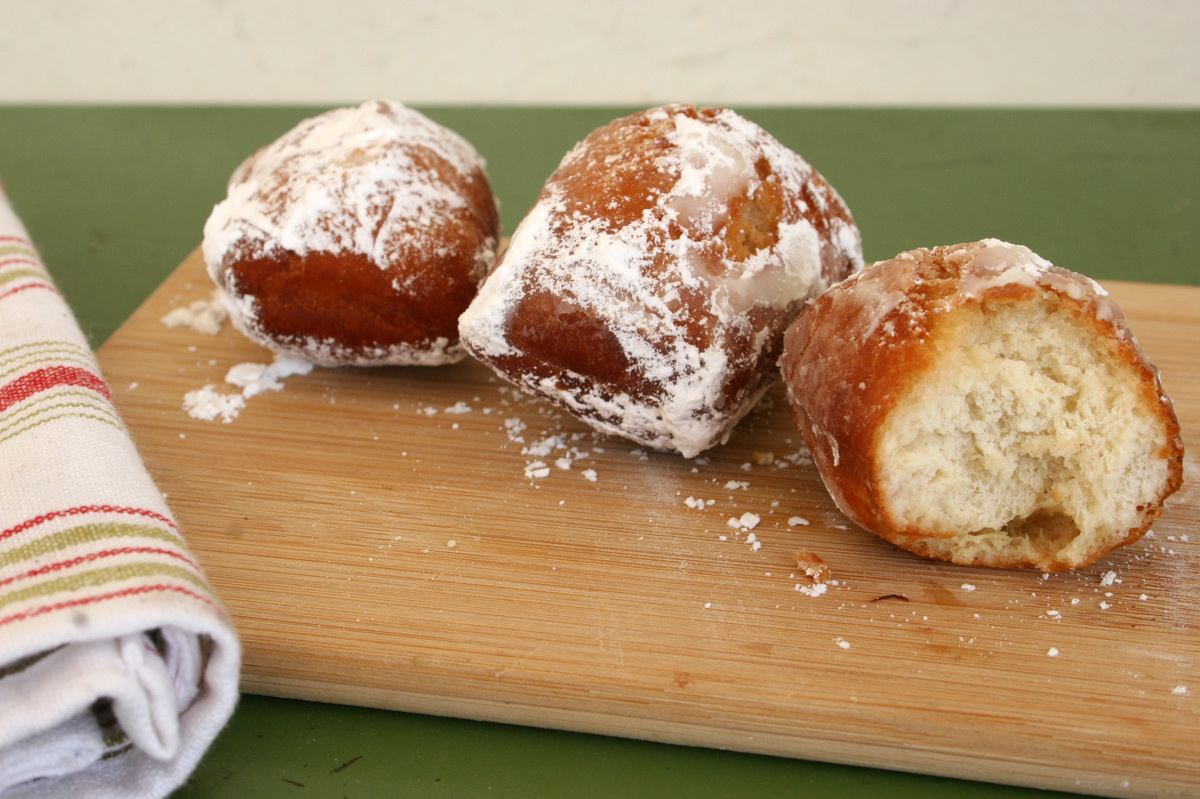 In a medium bowl, sprinkle the yeast over the warm milk, add a pinch of sugar and whisk together. Set aside in a warm place to rise, 5 to 10 minutes.

In a large bowl or in the bowl of a stand mixer fitted with the dough hook, combine flour, mashed potatoes, 1/2 cup sugar and salt. Add the yeast mixture, butter and beaten egg. Mix together until combined.

Turn the dough out on a floured surface and knead until the dough is elastic and not sticky, about 3 to 4 minutes. Roll out dough about 1/2-inch thick and cut into squares (a round biscuit cutter is also OK, though squares are traditional).

Place the cut doughnuts on a floured cookie sheet, cover with a cloth, and let rise 30 to 40 minutes.

Meanwhile, in a deep, heavy saucepan with high sides, pour oil about 3 inches deep. Bring to 360-375 degrees F over medium heat. Working in batches, fry fasnacht until puffed and golden brown, about 2 minutes on each side. Transfer to a paper towel-lined plate and let cool.

Once cool, dust with powdered sugar and serve warm.

Beignets are the classic pillowy, fried dough confections traditionally eaten at French Mardi Gras celebrations and now ubiquitous in Louisiana and other areas of the South. I recommend making the dough the night before so you can fry and eat them fresh first thing the next morning. This recipe is adapted from What's Cooking America. 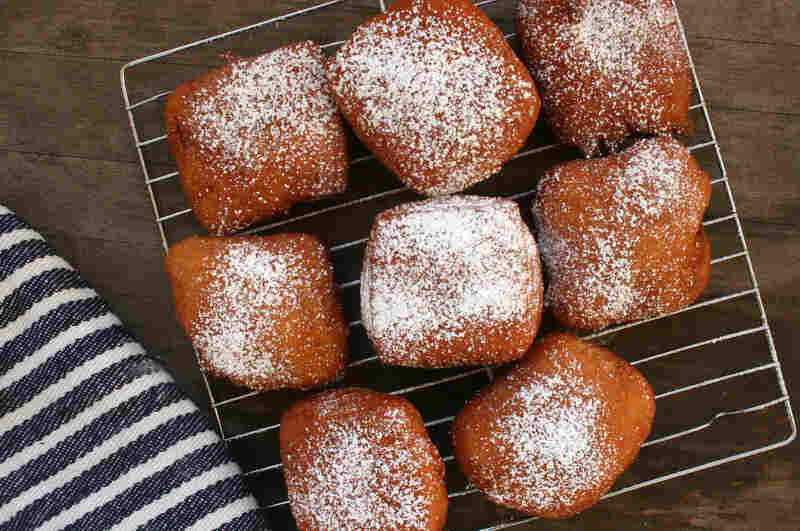 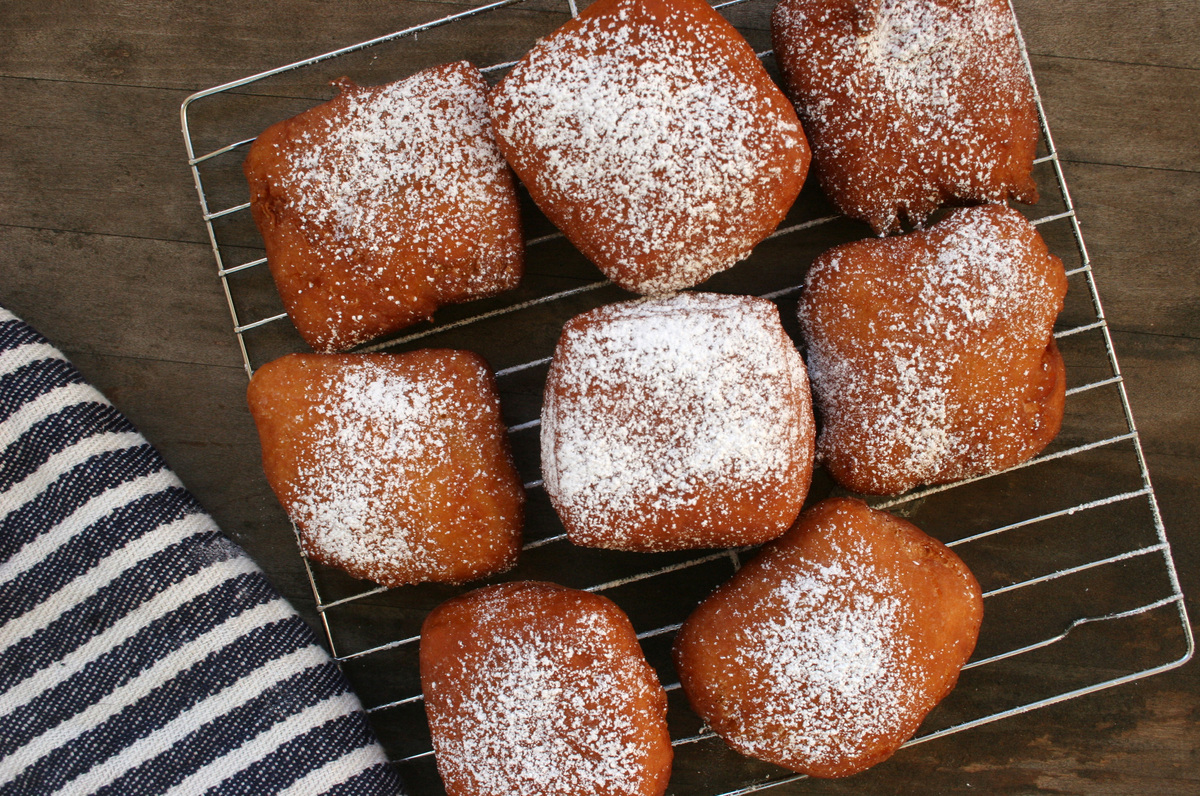 In a medium bowl, place water, yeast and pinch of sugar. Whisk together and let sit to dissolve yeast, 5 to 10 minutes.

In a large bowl or bowl of a stand mixer fitted with the dough hook, combine flour, 1/4 cup sugar and salt.

Add yeast mixture and stir until incorporated. Add egg, butter and evaporated milk and mix until well combined and dough is smooth.

Remove dough from bowl and roll out onto a lightly oiled surface. Form dough into a ball and place in a lightly greased bowl. Cover with plastic wrap and refrigerate until chilled, 3 to 4 hours or overnight.

Once chilled, remove dough from the refrigerator and roll out on a lightly floured surface about 1/2-inch thick. Cut into squares and place on a baking sheet lined with parchment paper. Cover with a cloth and set aside while you heat the oil.

In a deep heavy saucepan with high sides, heat 3 inches of oil to 360-375 degrees F. Working in batches, fry the beignets for 2 minutes on each side, until puffed and golden brown. Using a wire skimmer or slotted spatula, transfer to a paper towel-lined plate to drain. Transfer to a baking sheet and let cool completely. Dust with powdered sugar and serve warm or at room temperature.

Different from the other recipes featured here, Italian cenci (literally, "rags") are strips of fried pastry that are said to have been made from leftover scraps of dough. They are known by different names across Italy and are akin to elephant ears or funnel cake in the United States. This recipe is adapted from Cucina Povera: Tuscan Peasant Cooking by Pamela Sheldon Johns (Andrews McMeel, 2011). 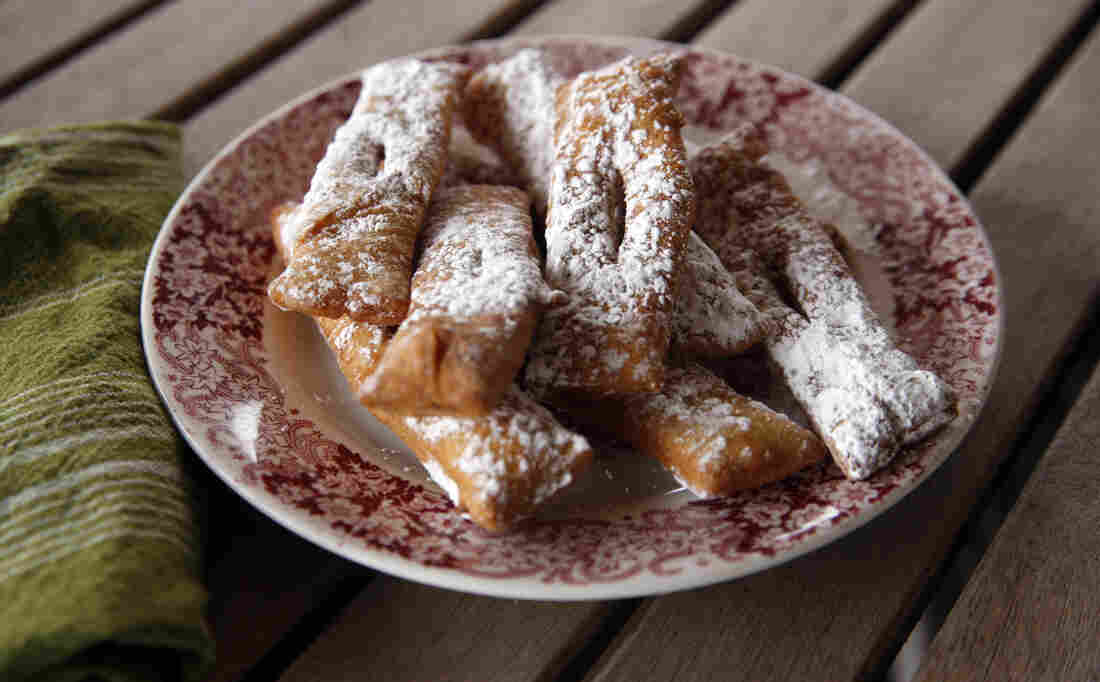 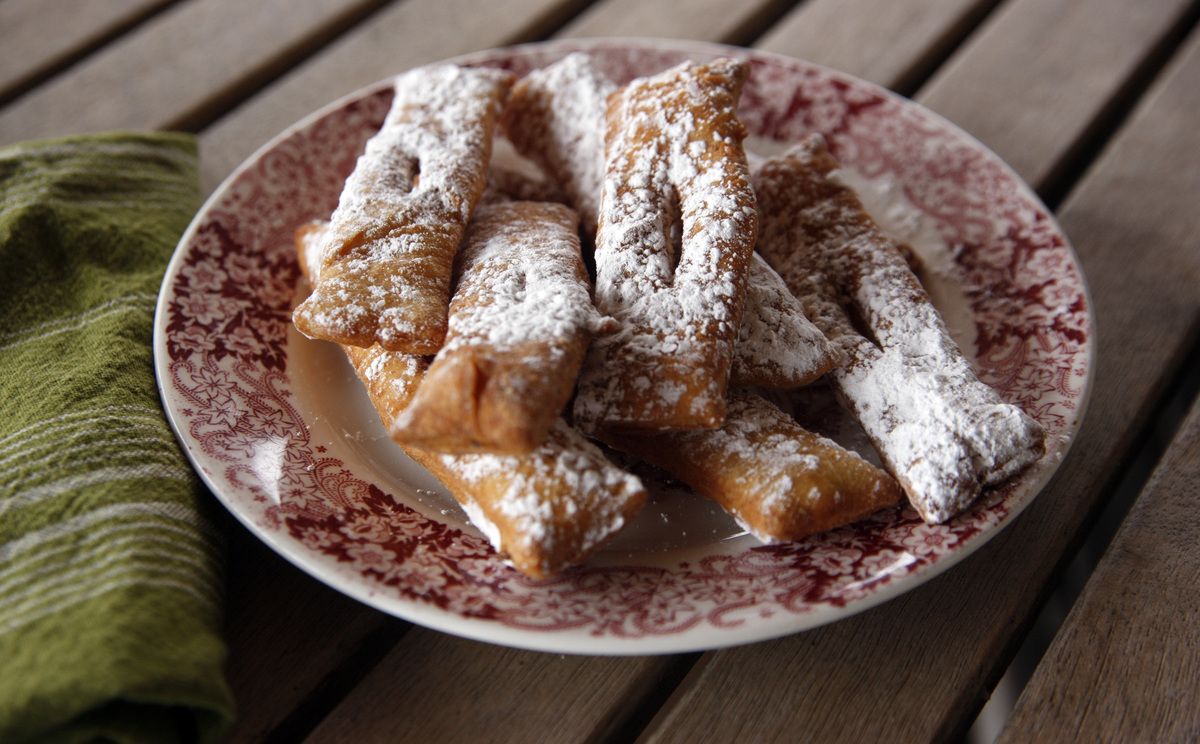 In a large bowl or bowl of a stand mixer, combine the sugar, eggs and butter. Beat with a wooden spoon or stand mixer until creamy.

Stir in the sparkling water or wine, lemon zest and salt. Stir in the flour, blending until well-combined and dough is stiff, though sticky. Cover with plastic wrap and refrigerate for 1 hour.

On a lightly floured surface, roll the dough out to a thickness of 1/8 inch. Using a fluted pastry wheel, cut the dough into 1-by-3-inch strips. Make a cut down the center of each strip, leaving the ends attached.

In a deep heavy saucepan with high sides, heat 3 inches of oil to 360-375 degrees F. Working in batches, fry the pastry for 3 to 4 minutes, or until golden. Using a wire skimmer or slotted spatula, transfer to a paper towel-lined plate to drain. Transfer to a baking sheet and let cool completely.

Dust with powdered sugar and serve warm or at room temperature.