Accessibility links
Movie Review - 'The Lunchbox' - A Meet-Cute Romance With A Delicious Twist A correspondence begins in the unlikeliest of ways when a lunch delivery from a Mumbai woman to her office-worker husband accidentally makes its way into a stranger's hands. 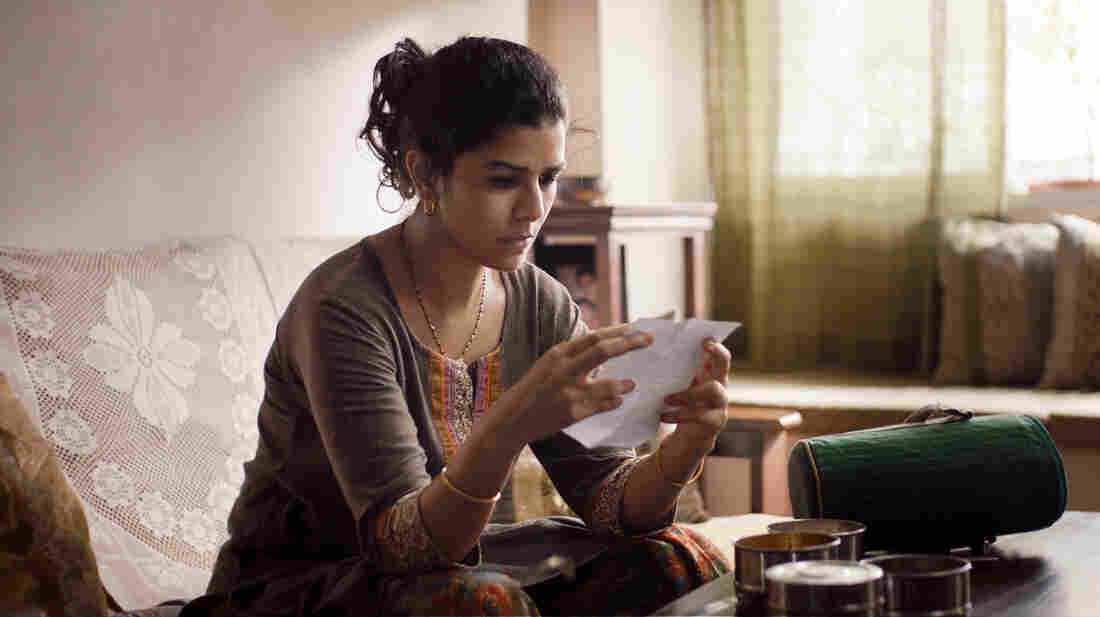 Ila (Nimrat Kaur) is a Mumbai housewife who accidentally begins a correspondence with another man when the lunch she packs for her own husband goes astray. Sony Pictures Classics hide caption

In Hindi with subtitles

When people talk about Bollywood movies, they usually mean Indian romances with extravagant musical numbers. But there are smaller Indian films, too, and one that has earned international acclaim at film festivals is opening tomorrow in major U.S. cities. It's called The Lunchbox.

We're in Mumbai, India's commercial capital, where a middle-aged man is about to get a very tasty surprise at work: A devoted young wife — not his — has packed her husband's daily lunchbox with an amazing-looking Indian meal, and sent it to him by way of an only-conceivable-in-India delivery service.

The opening sequence shows Ila (Nimrat Kaur) packing a home-cooked meal into a tower of metal containers called a tiffin, then putting this "lunchbox" into an insulated cloth bag. The idea is to get it to her husband's office hot, and he's already at work.

So she hands it to a bike messenger, who ties it to the dozen lunchboxes he's already carrying and pedals it to a train, where it joins dozens more lunchboxes on their way to a truck, which zips them to a cart, where they're sorted so they can be raced through downtown traffic to a big office building, where Ila's lunchbox and a lot of others are carried by hand to individual desks.

Not the right desk, in this case: Ila's lunchbox lands on the desk of Sajaan, an accountant. And as soon as you see the wonderful actor Irrfan Khan reacting to the aroma, you realize this guy is not Ila's husband.

When the tiffin comes back empty, but her own spouse doesn't say a word about the meal, Ila realizes he never got it. So she sends a note with the next lunch, thanking whoever did receive it for paying her the great compliment of sending it back empty, and telling him she enjoyed believing for a few short hours that the way to her husband's heart really was through his stomach.

Sajaan replies: "Dear Ila, your husband sounds like a busy man." And soon the notes between them turn into a conversation of sorts. First about food, then about old TV shows, and after a while, talk about daily life that starts to seem like something more.

"When my wife died, she got a horizontal burial plot," Sajaan writes. "I tried to buy a burial plot for myself the other day, and what they offered me was a vertical one. I spend my whole life standing in trains and buses, and now I'll have to stand even when I'm dead. Why don't you have another child? Sometimes having a child can help a marriage."

The Lunchbox is a first feature for director Ritesh Batra, but it nicely captures the almost overwhelming crush and noise of contemporary India, and it plays cleverly and delicately with the tension of whether its two correspondents might eventually meet. Theirs is one "virtual" romance that has nothing to do with social media.

In fact, it's hard to imagine a less high-tech way of keeping in touch than through Mumbai's dabbawallahs — an army of white-capped lunchbox deliverymen who, with little or no paperwork to back them up, somehow manage, every weekday, rain or shine, to match up thousands of workers with the meals their loved ones have prepared. A Harvard management study says almost no lunchboxes ever go astray. Audiences are going to be very happy that this one did.