Accessibility links
To Save Endangered Tortoises, Conservationists Deface Their Shells The ploughshare tortoise's ornate golden shell makes it a popular black market pet. In California, the Turtle Conservancy is trying to give the threatened species a second chance.

Listen · 3:55 3:55
To Save Endangered Tortoises, Conservationists Deface Their Shells 3:55 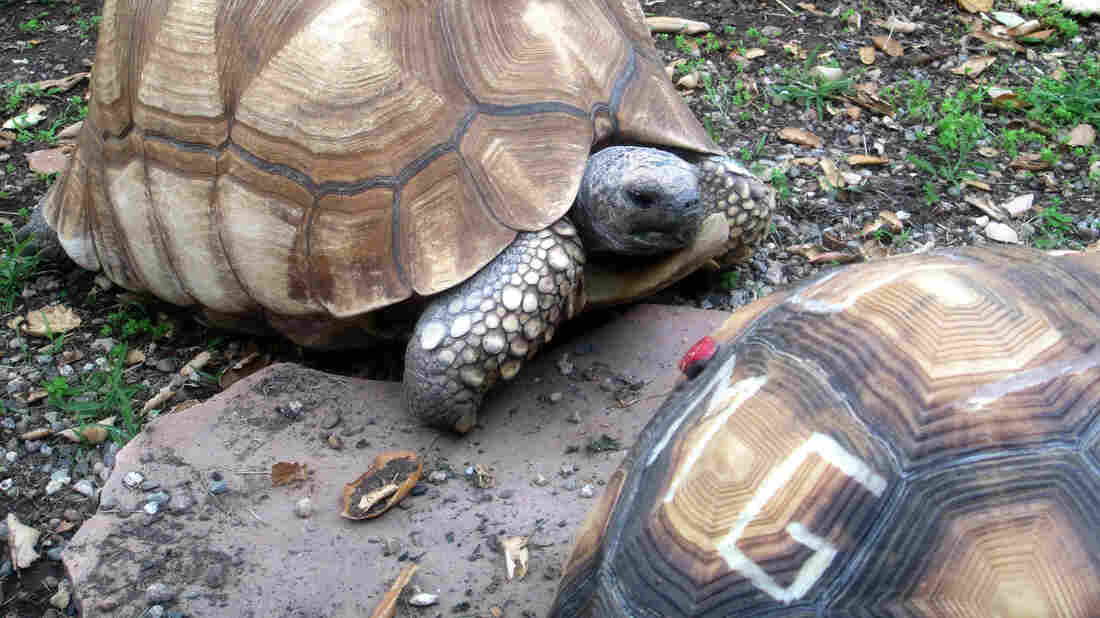 Out of the 330 species of turtles and tortoises, over half are threatened with extinction, says conservationist Eric Goode. Gloria Hillard/NPR hide caption 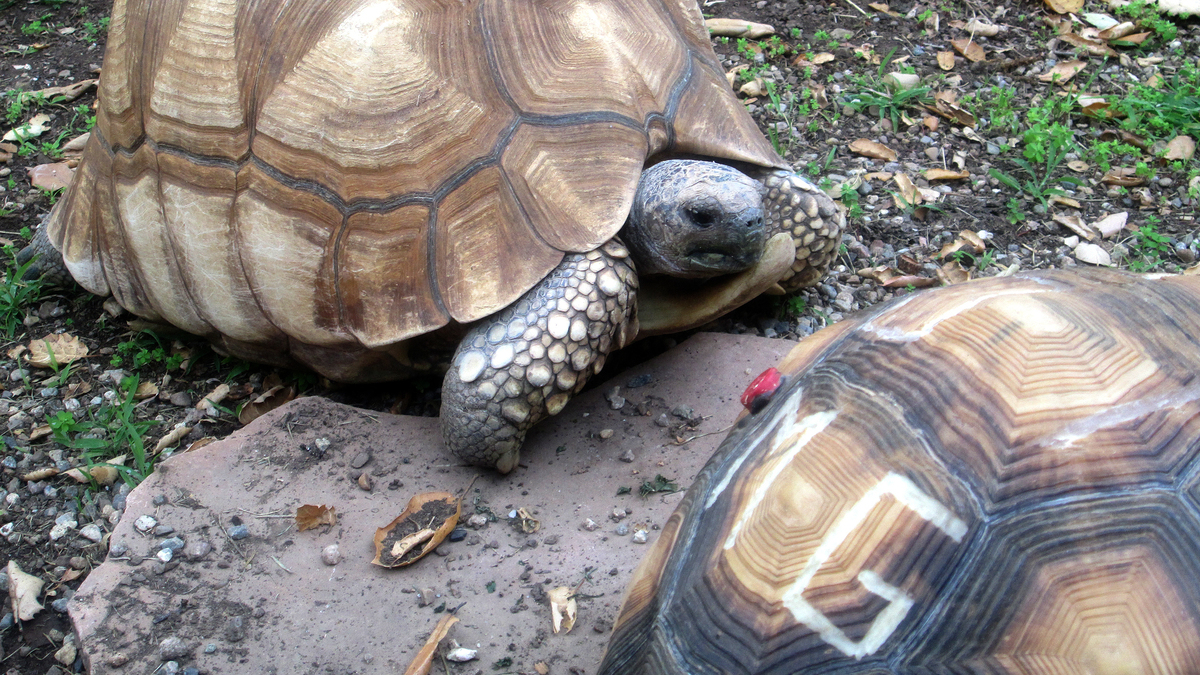 Out of the 330 species of turtles and tortoises, over half are threatened with extinction, says conservationist Eric Goode.

They're a quiet bunch, the hundreds of animals residing at the well-guarded botanical oasis in California's Ojai Valley. They've been brought to the Turtle Conservancy from countries around the world, like modern-day refugees escaping certain and persistent perils.

For years, the conservancy has worked on the front lines of the battle against smugglers, including on behalf of the ploughshare tortoise from Madagascar. The species is among the rarest tortoises on Earth; experts believe that only a few hundred still exist. Their rarity, along with a golden shell, has laid a high price on their head. 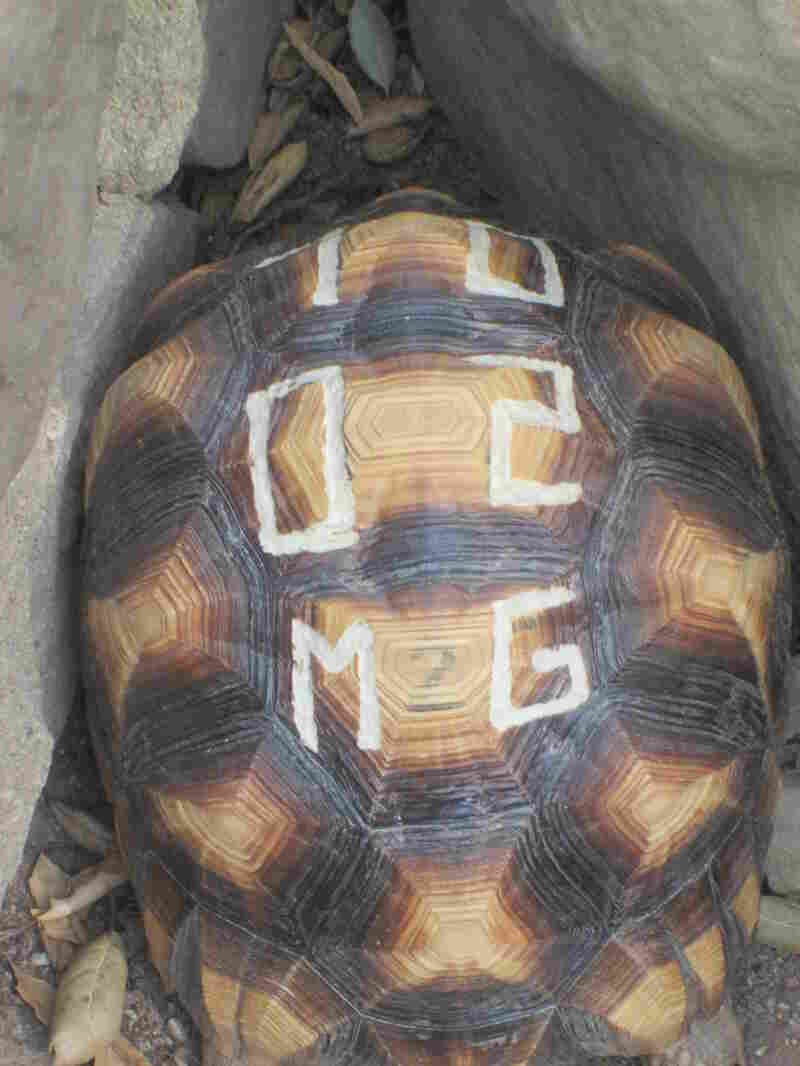 Conservationists carve letters and numbers into the tortoises' shells to make them less desirable to poachers. Gloria Hillard/NPR hide caption

Goode purchased the land in the Ojai Valley eight years ago, transforming it into a breeding facility and a lush haven for some of the world's most endangered creatures — those threatened by hunters, habitat destruction and now a booming global wildlife trade.

"In Southeast Asia in particular, the newfound wealth in the middle class enables people to now buy animals and keep them as status symbols," Goode says. "This is happening in China, in Indonesia."

The ploughshare tortoise is one of the most coveted living status symbols. On the black market they can fetch tens of thousands of dollars each. If you hold an adult in your hands, it's the size of a basketball.

At the Turtle Conservancy, two of them slowly meander toward veterinarian Paul Gibbons, their rounded feet lightly touching the earth.

"We're looking at a tortoise that's incredibly beautiful with its golden shell and this rounded dome," Gibbons says.

To help save this species, conservationists aim to make its most attractive feature, the shell, less desirable to poachers and wealthy collectors, he says. Carved into the back of a 30-pound female ploughshare at the conservancy are four large numbers, 7-0-0-2, and two block letters, M-G. Each tortoise has a unique identifier that includes info about where the tortoise originated, in this case Madagascar, and where it was found — Asia. The engraving is a last-ditch effort to protect the animals.

"We want the hobbyist or the pet owner to think: I'm looking for a beautiful tortoise, one that's not damaged," Gibbons says.

The engraving is being done not only on those in the captive breeding program but on the few hundred remaining in the wild as well. Shells wear down as part of the aging process and the procedure doesn't appear to be a painful one for the tortoise, Gibbons says. The long-term effects are less certain, though.

"We are balancing some harm with the benefit to the species and the individual," Gibbons says.

Currently, 11 ploughshare tortoises live at the sanctuary, but many people are hoping that number rises. Gibbons points to a pregnant female ploughshare nestled next to a large rock.

"The eggs now are 2 1/2 months old. We're seeing signs that we believe there's a chance they might be fertile, but we're not certain yet," Gibbons says.

Nothing would make the conservancy's Goode happier than welcoming captive-bred ploughshare hatchlings into the world.

"On one hand, tortoises have lived for over 250 million years. They've outlived the dinosaurs and they precede the dinosaurs. On the other hand, man is able to exterminate them very, very quickly," Goode says.

It is a mystery how they've survived this long. They move so slowly; they can't run away. All they can do is calmly stare back at you through ancient eyes.