Accessibility links
Neil DeGrasse Tyson Explains Why The Cosmos Shouldn't Make You Feel Small The astrophysicist says that participating in a "great unfolding of a cosmic story" should make us feel large, not small. This spring, Tyson hosts a TV series called Cosmos: A Space-Time Odyssey. 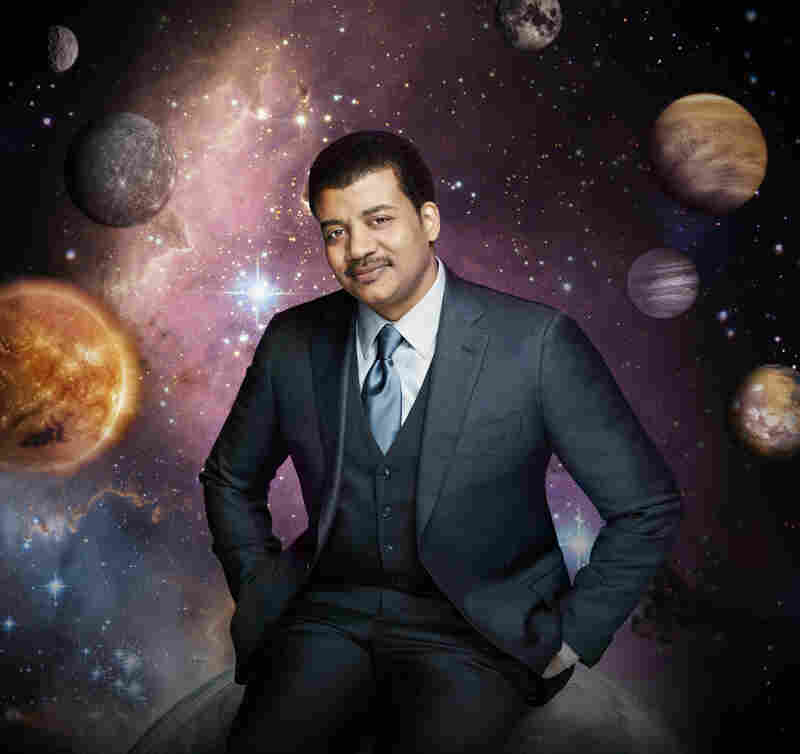 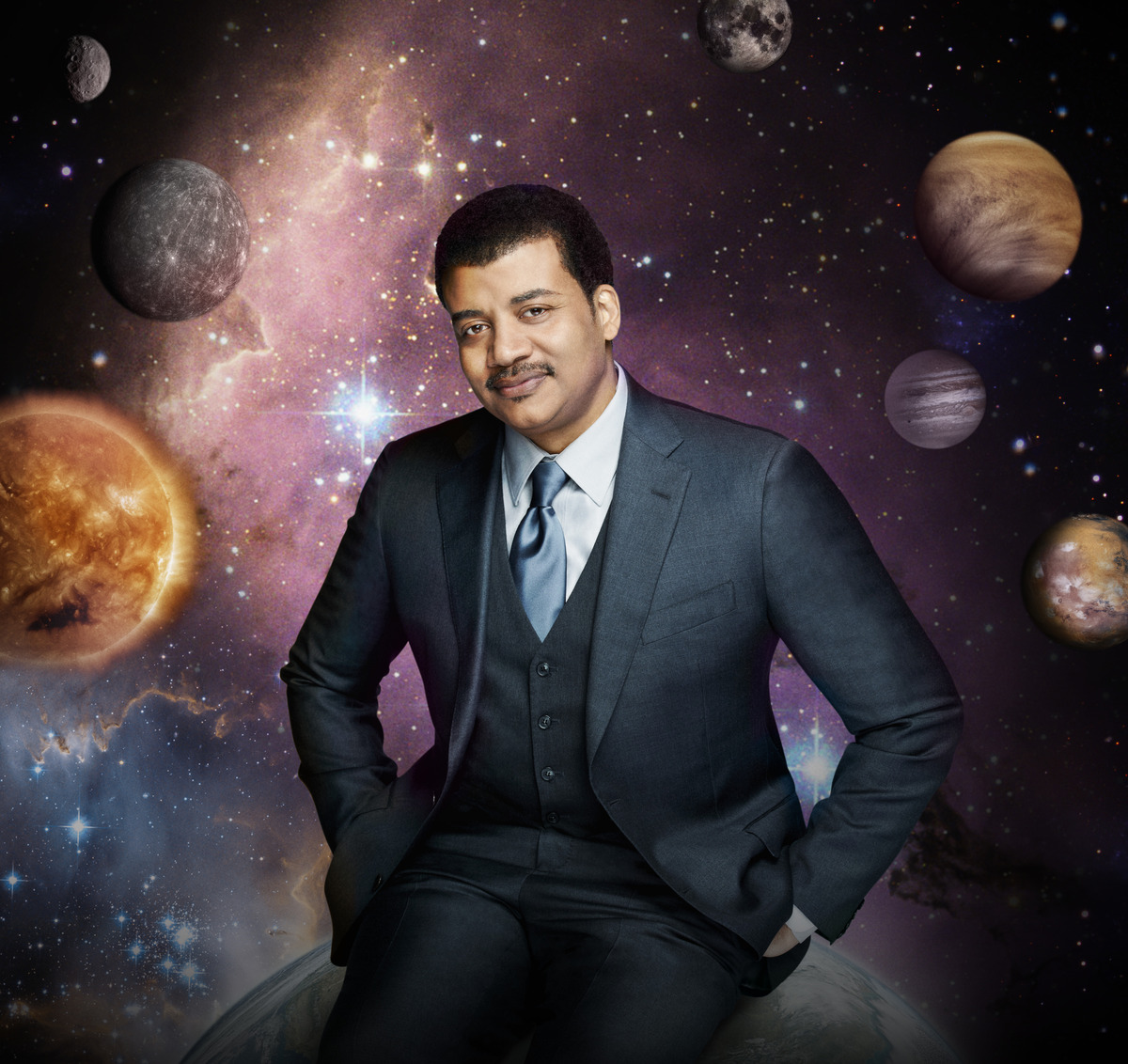 When it comes to "callings" we usually think of people who feel drawn to religious career paths. But if you ask Neil deGrasse Tyson how he became an astrophysicist he says: "I think the universe called me. I feel like I had no say in the matter."

Tyson, director of the Hayden Planetarium at the Museum of Natural History in New York, is a prolific writer and frequently cited authority on astronomy in the popular media. He's hosted a four-part series on Nova and appeared everywhere from The Tonight Show to The Daily Show to Wait Wait ... Don't Tell Me!

This spring, Tyson hosts a new TV series called Cosmos: A Space-Time Odyssey. It's an update of the influential 1980 PBS series Cosmos: A Personal Journey. Tyson was entering graduate school in astrophysics at the time and remembers watching Carl Sagan host the original Cosmos.

It was "proof that a scientist can communicate with the public in a manner that was very different from a professor in front of a classroom or pontificating from up on high," Tyson tells Fresh Air's Dave Davies. "His style was very conversational and fireside-chatty. There he was on the screen, but he was really with you in the living room."

Tyson worked with Ann Druyan, Sagan's widow, in developing the new series, which debuts March 9 and 10 on Fox and the National Geographic Channel.

If you are one of those people who don't like thinking about astronomy because it makes them feel small, Tyson suggests looking at it a different way: "Our molecules are traceable to stars that exploded and spread these elements across the galaxy," he explains. If you "see the universe as something you participate in — as this great unfolding of a cosmic story — that, I think should make you feel large, not small. ... Any astrophysicist does not feel small looking up in the universe; we feel large."

On how to balance science and show biz

[I don't think] that one of the two has to be compromised for the both to be successful; I don't agree with that premise. I think if you have not thought deeply of how to communicate science you might get stuck saying, "OK, I have to dumb this down. I have to be flashy but with no real content." But if you really think deeply about the visualizations, the visual effects and the content, you get to have both.

Mysteries of #Gravity: Why Bullock's hair, in otherwise convincing zero-G scenes, did not float freely on her head.

On what Gravity got wrong

Cosmos has as its priority to get the science right, above all else, and we will then tell the story with the properly represented science. In Hollywood ... I think they take some latitudes, either out of ignorance or because they feel as though the truth would somehow constrain their flexibility of storytelling.

In the film Gravity ... I just felt compelled to put out 10 tweets or so on things I thought they could've gotten right but they didn't get right. ... One of which was, why is it that Sandra Bullock, who is portraying a medical doctor, is fixing my Hubble Space Telescope! Get her the hell off my telescope! As an astrophysicist I don't walk into her operating room and say, "I got this." ... So little things like that, and I was just having fun. ...

For example, her hair — her hair should've been sort of floating in zero-G and it was not. It was like heavy mousse, or something, that kept that stuff down. ... That's the first thing we notice when we see astronauts floating in space is the hair sticking up and it's kind of comical and funny, it's the great reminder that they're in zero-G.

Tyson chronicled America's love affair with Pluto in The Pluto Files: The Rise and Fall of America's Favorite Planet. He talked with Melissa Block about the planetary controversy in 2009:

Astrophysicist Chronicles The Battle Over Pluto

On Pluto losing its status as a planet

So Pluto is not only the littlest planet, all right, that alone shouldn't hurt it, but more than half of its volume is ice. No other planet has that. So if you moved it to where Earth is right now, heat from the sun would evaporate the ice and it would grow a tail. That's no kind of behavior for a planet!

Pluto, its orbit is elongated so severely that it crosses the orbit of Neptune. Now, we have words for objects that cross the orbits of other planets and are made of mostly ice; they're called comets. By the way, there are six moons in the solar system that are bigger than Pluto including Earth's moon, which is five times the mass of Pluto. So really, Pluto was never the ninth planet; it was the first of a new class of objects that we didn't really discover the rest of until the early 1990s.

On the big questions astronomers are trying to answer

We can measure the influence of this thing we call dark energy, which is forcing an acceleration of the expanding universe. We don't know what that is, we don't know anything about it, other than what it's doing to the universe.

Then 85 percent of the gravity of the universe has a point of origin about which we know nothing. We account for all the matter and energy that we're familiar with, measure up how much gravity it should have — it's about one-sixth of the gravity that's actually operating on the universe. We call that dark matter, but what we should call it is "dark gravity." We don't know what that is either.

We don't know how [Earth] went from inanimate organic molecules to self-replicating life. We got top people working on that as well.

But my favorite question is one that we don't even know to ask yet because it's a question that would arise upon answering these questions I just delivered to you. ... If you're a scientist and you have to have an answer, even in the absence of data, you're not going to be a good scientist.

On becoming an "innovation nation"

On the "cosmic perspective"

You will never find people who truly grasp the cosmic perspective ... leading nations into battle. No, that doesn't happen. When you have a cosmic perspective there's this little speck called Earth and you say, "You're going to what? You're on this side of a line in the sand and you want to kill people for what? Oh, to pull oil out of the ground, what? WHAT?" ... Not enough people in this world, I think, carry a cosmic perspective with them. It could be life-changing.

NASA's Lessons From The Outer Limits

You're broke in graduate school, basically, and I was flexible from having danced and I was pretty cut from having wrestled, and I also rowed and so on the dance team; there were some fellow male dancers who told me about this club, these ladies' clubs but there are these male dancers, and they said they danced moves we do just in the normal training for our dance performances ... and they invited me because I needed more money, I was broke.

So I went just to observe it [to see] if it was something I could do and they came out with jockstraps having been soaked in lighter fluid, asbestos jockstraps, ignited, coming out dancing to Jerry Lee Lewis' "Great Balls of Fire."

I said, "Nope. Not for me." I'm embarrassed to say that it wasn't until that moment when I said to myself, "Maybe I should be a math tutor." I don't know why I didn't think of that first.