Accessibility links
'Kids For Cash,' Or Perhaps Not — But A Broken System, Certainly The 2008 scandal was about more than whether a judge took a bribe from a private detention facility. A new documentary tells a story about the perils of zero tolerance in the juvenile system. 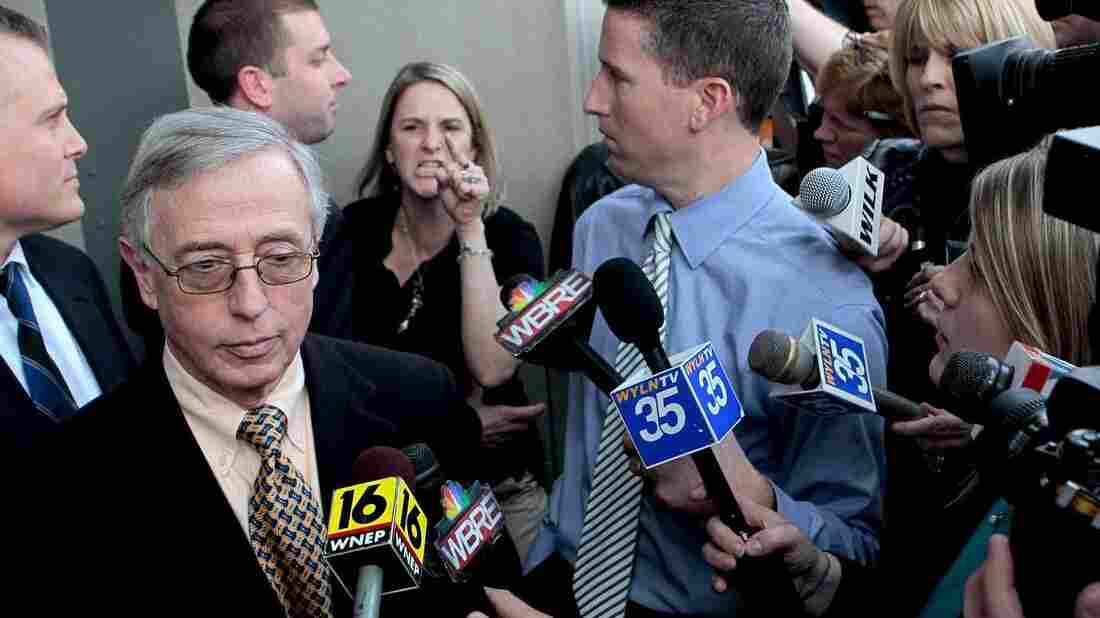 Sandy Fonzo confronts Judge Mark A. Chiavarella on the courthouse steps after he was convicted in the "Kids for Cash" scandal in 2011. Fonzo's son, who eventually committed suicide, was among thousands Chiavarella had sent to a juvenile detention facility from which he'd received a "finder's fee." SenArt Films hide caption

Rated PG-13 for some thematic material and language

There's a moment, toward the end of the documentary that centers on him, when Judge Mark A. Chiavarella breaks down, his voice cracking as he mourns the likelihood that his grandchildren won't have him in their lives.

It's a human moment — and a hugely, grimly ironic one. That's because Mark Chiavarella is the "Kids for Cash" judge, notorious for taking money from the private juvenile facility he enthusiastically sentenced thousands of kids to, effectively cutting those children off from their own families.

These aren't hard-case delinquents we're talking about, but in the aftermath of the Columbine school shootings, a zero-tolerance philosophy took hold across the nation. And Chiavarella, who handled juvie cases in Pennsylvania's Luzerne County, really meant it when he said zero: hair-pullings, schoolyard fights, table-leaping in the cafeteria, and other moderately bad behavior would get kids sent away from his courtroom in shackles. Scare 'em straight, was the idea; make them understand that actions have consequences. One young woman went up the river for making a fake MySpace page that mocked her vice principal.

And here's the thing: Chiavarella's constituents cheered him on. They admired his sternness, his no-nonsense approach — until news broke that he and fellow Judge Michael Conahan had taken nearly $3 million in "finder's fees" from the operator of a private detention facility where many of those kids were being locked up. Scandal exploded. The feds descended. And suddenly the hero of Wilkes-Barre was its biggest villain.

Robert May, a producer on The Station Agent and The Fog of War, makes his directing debut with a carefully measured, admirably precise account of this sordid business. Kids for Cash even backs away from its own title as it parses the gritty details of the scandal: Chiavarella has always maintained adamantly that accepting the money was a bad idea, given the optics and ethics of the situation, but never a motivation. (Indeed, the film cites stats suggesting that his sentencing rates didn't change much after the payout, and the eventual charges against him didn't include bribery.)

The film lets the disgraced judge make that argument in a good deal of detail, in interviews that reveal a man who doesn't much like the idea of leeway for troubled kids. His own father knocked him unconscious when he tried to steal a car, he explains, bemoaning parents who coddled their teens, and in that confession echoes the rattle of a skeleton that seems to haunt his entire approach to juvenile jurisprudence.

Kids for Cash, and the journalists and juvenile-law watchdogs who are its white knights, reserve a measure of scorn for the zero-tolerance policies that Chiavarella embodied, pointing out the irrationality of expecting a hormonal adolescent to rationally weigh impulse versus consequence. The social pendulum swung too far after Columbine, they insist, and a generation of teens is paying the price. Among them is one young man, once a star wrestler, whose mother confronts Chiavarella on the day of his conviction to hold him responsible for her son's suicide.

The film has a few weaknesses — imprecise editing, a musical score that's a little too overdramatic, a recurring bit of visual business involving an attic full of musty dollhouses and paper-cutout kids. It also doesn't quite interrogate the explosion of the privatized-corrections market and the corruption it might seem to invite, though it certainly bares the question and leaves it in plain view for audiences to ponder.

What it does ask is whether we the people, given the horrible reality of violence in our schools, can or will put the conversation around teen crime back on a less terrified footing.

As for Chiavarella: He's in federal prison in Illinois, convicted of charges of racketeering, tax dodging, mail fraud, money-laundering and more, sentenced to 28 years and stripped of his judge's pension. Actions, it seems, do indeed have consequences.