Accessibility links
Courts Take A Kinder Look At Victims Of Child Sex Trafficking It's a stunning contradiction: Girls too young to legally consent to sex are being prosecuted for selling it. Some cities are setting up special courts to help these children rather than punish them. 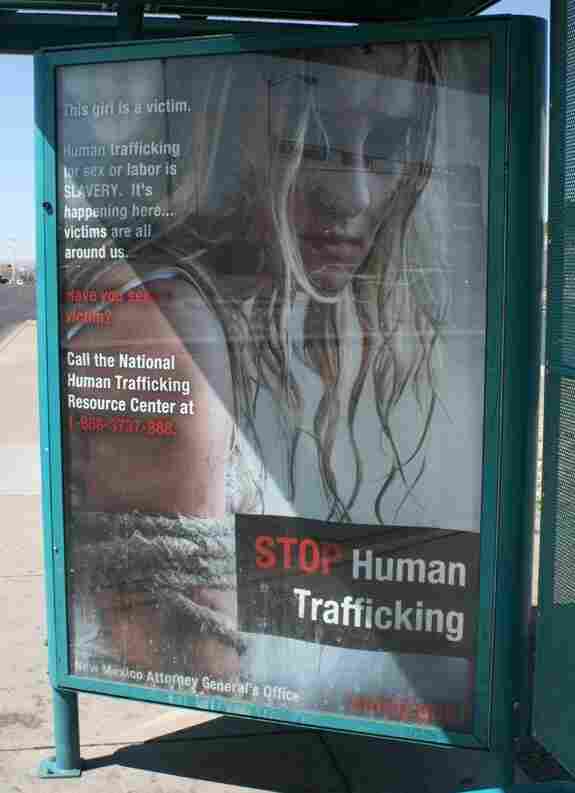 An ad on a bus shelter in New Mexico is part of an ongoing effort to educate law enforcement and the public about human trafficking. The Justice Department estimates that each year at least 200,000 children are trafficked for sex in the U.S. AP hide caption

We've all seen them: the public service announcements about sex trafficking in America. They're plastered on buses and billboards; images of young women exploited for their bodies, with hotlines to call for help.

The numbers are staggering. The Justice Department estimates that each year at least 200,000 children are trafficked for sex in the U.S., and it is said to generate upward of $32 billion a year.

Across the country, teens are being picked up on prostitution charges. It's a stunning contradiction in the law: Girls who are too young to legally consent to sex are being prosecuted for selling it.

Amy Farrell is an expert who studies sex trafficking laws. She tells NPR's Arun Rath some states are trying to fix the problem through what are called safe harbor laws.

Twelve states have passed safe harbor legislation for child victims of sex trafficking, according to Farrell. She says the basic premise of these laws is to give law enforcement and prosecutors a way to divert children who have been prostituted from a juvenile delinquent proceeding and instead put them into what's called a "child in need" proceeding.

In some states without safe harbor laws, there are efforts to set up special courts specifically to deal with these cases.

"This has basically been a whole series of individual judges seeing these cases coming through their courts and becoming passionate and involved in the issue and being willing to work with prosecutors, the defense bar and service providers to establish these problem-solving courts," she says.

In California, there is no safe-haven law; minors can, and are, prosecuted for prostitution. But in Los Angeles County, Judge Catherine Pratt has set up a special juvenile court to help victims of sex trafficking.

During the last few years, Pratt has been consumed by her work helping young victims of sex trafficking get treated as just that: victims. She says it's been a tough battle because the justice system treats anyone who sells sex as a criminal — even a child.

In normal juvenile courts, young women who are picked up for prostitution don't get counseling and other services — they get punished. Girls can be sentenced to juvenile detention or forced to testify against their exploiter.

Pratt remembers one case that made her believe the system was broken. A young girl was asked to testify against her pimp, in a public adult court, in a case that involved her being drugged into unconsciousness. She was asked by the district attorney to review a tape of the incident, which she had never seen, and identify the defendants in the court.

"It was a devastating experience for her, and she has struggled ever since then," Pratt says. "So that is one of the cases I feel very badly about. I feel like we did a very poor job of protecting her from that and preparing her for that. It's one of the lessons that I learned about how to work with these kids."

So Pratt set out to create a court that would protect girls from trauma at the hands of the justice system and focus on rehabilitation instead of punishment. Girls in her court are placed into special group homes with trauma counselors and sexual education resources. And, in general, the girls aren't compelled to testify against their abusers. It's all about gaining trust, Pratt says.

"When you first meet some of these kids, they are pretty off-putting," she says. "They have these levels of trauma that really prevent them from making connections with people."

Kristina Fitz is a survivor who mentors for Saving Innocence, a non-profit organization aimed at helping rescue and restore child victims of sex trafficking. Fitz is assigned to 25 girls; she meets with each one for three hours a week for counseling. She says they look up to her because she knows what they went through. Fitz was trafficked for sex for more than three years.

"I'm like a support system to them, so if they want to talk about certain issues that they can't really talk about, or they don't have anybody to talk to," Fitz says. "I take them out on trips, out of their group homes, so they can see there's things other than just working and being exploited through prostitution."

One of the things she teaches girls is how to recognize men who will exploit them, something they call the "Prince Charming guy." Fitz says these are typically men who will manipulate them and make them feel loved by buying them things like a cellphone, jewelry or clothes.

"Those might be little things to us adults, but to children who have never had that before, that's a big deal to them," she says. "So it's easy to manipulate a child by giving her these simple little things."

Fitz says the program also teaches the girls sexual education, like condom use and about sexually-transmitted diseases, as well as helping them with their self-esteem and assertiveness.

Judge Pratt says that initially her treatment-focused approach was working as intended. It improved the ability to prosecute the traffickers. But then something else happened. A lot of the boys who were coming out of foster care and the juvenile justice system were becoming pimps.

"The foster care system and juvenile justice system is creating both sides of this market, the suppliers and the goods," she says.

Nationwide, pimps are prosecuted far less often than the children they exploit. The men who buy sex from minors are very rarely prosecuted. Farrell says states are beginning to change the law, stiffening the penalties for purchasing sex from a child.

"The bigger problem isn't so much changing the laws — we're starting to do that — the real challenge will be convincing law enforcement and the judiciary to hold people who purchase sex from trafficked persons accountable," she says. "I think prosecutors are reluctant to pursue prosecution against johns because it's not been politically expedient to do so in many communities."

As for the girls in Pratt's special court, she thinks the court has been very successful. She's even working with a national organization of juvenile court judges to teach others how to work with victims of sex trafficking.

The most rewarding thing, though, is her relationship with the girls. Her office looks more like that of a beloved school principal than a judge, with framed pictures of Pratt at birthdays and graduations for the young women who have come through her court.

"Next week one of my girls who was on probation to me turns 19, so she just contacted me and said she wanted to go to dinner," she says.

The grant that funds the court runs out at the end of this year, and Pratt says she's not sure what will happen then. The county has said the budget cannot support the program.