Accessibility links
E-Cigarette Critics Worry New Ads Will Make 'Vaping' Cool For Kids As electronic cigarette companies get bold with advertising, anti-smoking groups fear the ads will lure teens and get them hooked on nicotine. 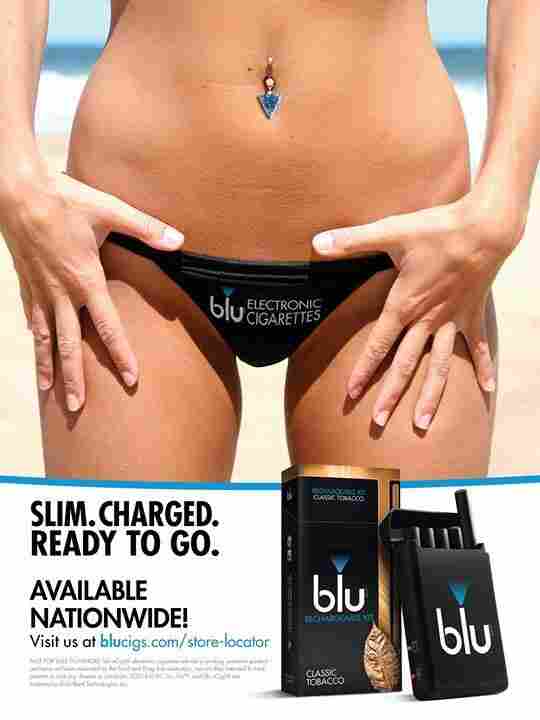 Electronic cigarette makers are getting bold with their advertising, using provocative new print ads and celebrity endorsements on TV. But public health advocates say these images are luring kids to hook them on nicotine.

The latest ad for blu eCigs, for example, which ran in the Sports Illustrated swimsuit edition, features an itsy bitsy bikini bottom emblazoned with the company name and includes the tagline "Slim. Charged. Ready to go." You don't see the model's face. The frame is from pierced belly button to mid-thigh. It left Stan Glantz, a professor of medicine at the University of California, San Francisco, struggling for a delicate way to describe it.

"The advertising just hit a new high in terms of chutzpah," says Glantz, director of the Center for Tobacco Control Research and Education. Using sex to sell cigarettes is nothing new, he says, and e-cigarettes are pushing the envelope because they're unregulated.

"If the Obama administration were serious about protecting the public on public health, they would immediately move to clamp down on the way e-cigarettes are being advertised and apply the same rules that apply to cigarette advertising," Glantz says.

Those rules include bans on sports sponsorships, cartoon characters, flavors and TV advertising.

Blu eCigs use a cartoon character named Mr. Cool on its website and YouTube. (Sound familiar? Some have noticed similarities between the ways the e-cigarette industry has marketed its product and how traditional tobacco companies have. Here, a House committee compares the two.)

"It's going to appeal to teenage boys," Willmore says.

Blu maker Lorillard has not responded to NPR's requests for comment. Blu's website asks if you are 18 to enter, and ads say "not for minors."

Willmore says nonetheless, they re-glamorize smoking and threaten to reverse decades of progress in preventing kids from getting hooked.

"Kids may view them as something they can use that's not going to harm their health without realizing that they contain very addictive nicotine," Willmore says. "For kids, these products could serve as a gateway to nicotine addiction and even to regular cigarette smoking."

After school at Woodrow Wilson High School in Washington, D.C., students say some of their peers use e-cigarettes. And that unlike smoking, "vaping" is perceived as something new and cool.

Lobbyists Amp Up Efforts To Sell Washington On E-Cigarettes

Thomas Mason, 16, thinks they're beneficial. "And the e-cigarettes is like flavored nicotine, so as far as I think, I think that nicotine is supposed to help you stop smoking," Mason says.

That perception worries Dr. Tom Frieden, director of the U.S. Centers for Disease Control and Prevention, which found that e-cigarette use among kids doubled last year. Frieden says youth are particularly susceptible to addiction and vulnerable to ads.

"What we're seeing from the e-cigarette companies is disgraceful. They're working to get another generation of American kids addicted to nicotine," he says.

Frieden says the Food and Drug Administration is working to regulate e-cigarettes and notes the first time it tried, the industry sued to stop it. He's hopeful any new regulation would prohibit marketing that might result in kids trying them.

"We think it's very appropriate to be advertising in places that have been banned by a combustible tobacco cigarette," Cardiff says.

Just five years ago, the industry was mostly small, independent companies. Now all the major cigarette makers are getting into the business. The latest is Altria, parent of Marlboro maker Philip Morris. Altria is about to launch its MarkTen e-cigarette nationally.

"Given the fact that it is a new and emerging category, it's important to recognize that raising awareness for those adult tobacco consumers who are interested in these products is an important thing," Sylvia says.

Interest in e-cigarettes is apparently already booming. It was a $2 billion industry last year and industry insiders say sales are on track to hit $5 billion this year.

The audio of this story, as did a previous online version, incorrectly says the Mr. Cool ad ran on television. The campaign actually ran on blu eCigs' website and on YouTube.