Accessibility links
Book Club Meeting: Come Talk About Steinbeck's 'Grapes Of Wrath' The I-Will-If-You-Will Book Club is reading John Steinbeck's Dust Bowl classic. (Some of us for the very first time!) Here we discuss Chapters 1 through 10. 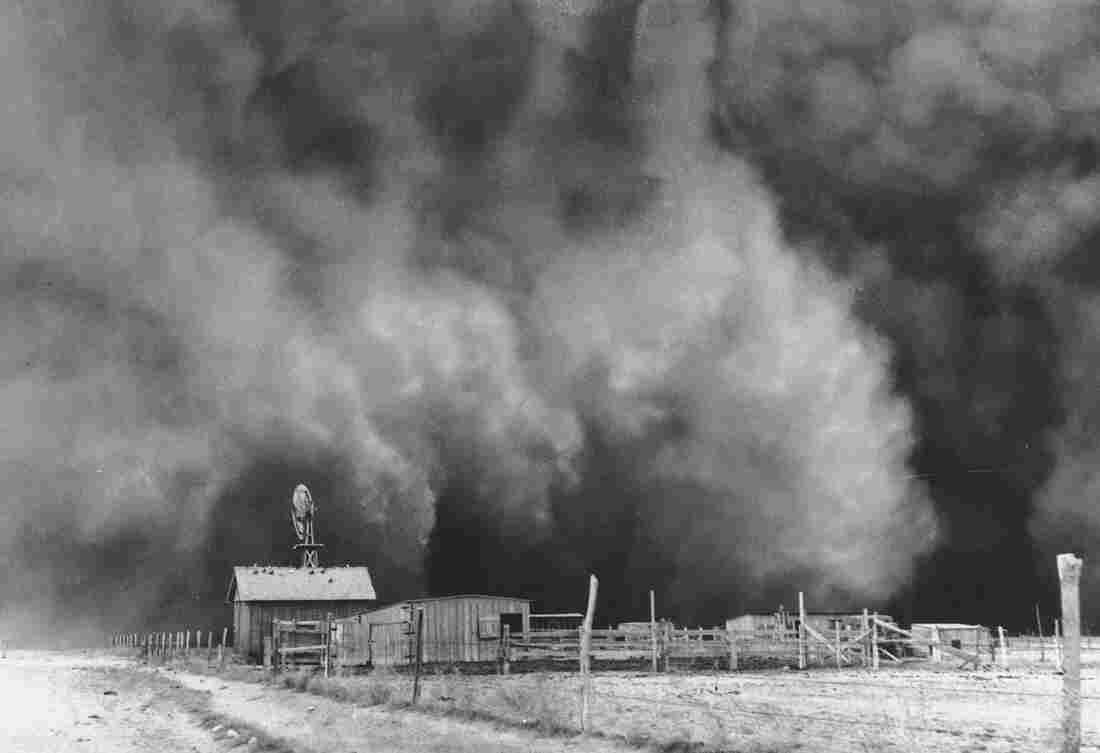 Late last week, an email exchange between NPR Books' team members went something like this:

Nicole: YUP. But then, later, people eat pigs. So, does that make them even?

Colin: I trust this isn't a spoiler. Ahem.

Camila: Not a spoiler cus it's NOT EVEN A BIG DEAL. That's the worst part. It's just like "Oh yeah, remember the time that pig ate that baby? Memories."

Clearly, some of us were still working on our Grapes Of Wrath book club assignment (Chapters 1 through 10, or, for those who know the book but aren't reading along, up until the Joads leave Oklahoma). But not today! Today, we're all caught up and ready to share our thinky thoughts, as Petra puts it.

Here's what we have to say about the first 10 chapters:

Petra: This is a book that drops you right in — if you're not ready to be smacked in the face with imagery, poetry and philosophy then I wouldn't pick it up. And the opening scenes, set during first days of the Dust Bowl phenomenon, remind me of good-quality fantasy writing (of course they do!) in their depiction of what was, essentially, an apocalypse.

Nicole: So far, the poetic chapters are totally drawing me in. My favorite part of the book has been the lyricism of those (usually odd numbered) chapters — so much so that I read all of 5 out loud: "... the monster that built the tractor, the monster that sent the tractor out, had somehow got into the driver's hands, into his brain and muscle, had goggled him and muzzled him — goggled his mind, muzzled his speech, goggled his perception, muzzled his protest." That's the stuff.

Colin: I am a sucker for a good literary interlude (Virginia Woolf's "Time Passes" in To The Lighthouse might be my favorite chapter in all of literature), so it's probably just a quirk of my own reading style that — though it's short, early and absent a single line of dialogue — Steinbeck's tale of the turtle crossing the road in Chapter 3 still manages to cast a shadow over the rest of the book for me. Funny, stressful, simple, somehow allegorical — all in the span of two pages. Brilliant.

Camila: I have a really bad feeling about Rose of Sharon's baby. This seems like a dangerous climate for symbols of hope and transformative happiness and it makes me really really nervous. But maybe I'm just bracing myself for the worst here. I'd be the person on the back of the truck saying "all the grapes in California are rotten, probably. Odds are things will get worse from here." So yes. I'll stop worrying about the baby. Or at least I'll try to channel Ma Joad and put on my least-worried face.

Beth: In the opening pages, I like how the landscape is a character. It's mostly thanks to the verbs: The clouds did not "try" anymore; the raindrops "hurried;" the wind "dug cunningly"; the corn "fought"; each stalk "settled wearily"; the wind "cried and whimpered."

And a few chapters later: With all the recent focus on corporate personhood — including the Supreme Court's 2010 Citizens United decision and Mitt Romney's infamous "Corporations are people" comment at the Iowa State Fair — I found some of these passages about how we conceptualize the entity of "The Bank" still really resonated 75 years after Steinbeck wrote them. Especially: "The bank is something else than man. ... Men made it, but they can't control it."

Tanya (on Friday afternoon): Admittedly, I haven't gotten very far with the book. Chapter 1 was hard for me to slog through. I know, I know, it was FOUR PAGES and lovely descriptive word pictures and all that but, it did not draw me in. Maybe because I'm not an outdoorsy person so all that description about the land and the dust and the rain clouds ZZZZZZZZZZZZZZZZZZZzzzzz. Then, I got to Chapter 2. And now, I want to read more. I like people. I want to know more about this Joad fella hitchin' a ride with the too chatty trucker. Killed somebody? Really? I saw that coming. But I still like how we got there.

What did you guys think? We'll be hanging out in the comments section of this post today, starting at 3 p.m. EST, to talk about what we've read so far.