Accessibility links
For Jim DeMint, Changing America Means Starting Small The former U.S. senator, now head of the Heritage Foundation, reflects on the state of the Republican Party, the Tea Party and what he thinks it will take to change Washington. 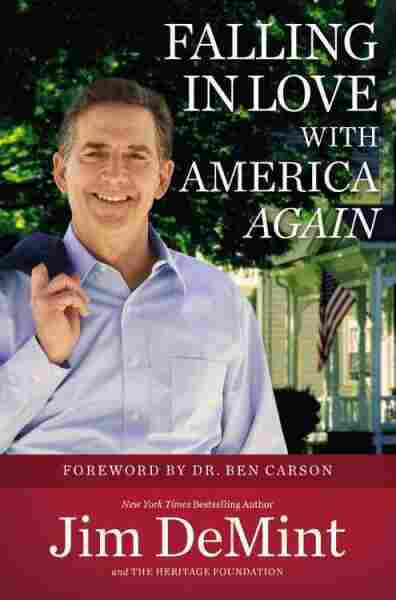 Falling in Love With America Again

by Jim Demint and The Heritage Foundation

The Conservative Political Action Conference — better known as CPAC — kicks off its annual meeting in Washington, D.C., this week. It's a who's-who of Republican presidential contenders and marquee conservatives like Jim DeMint, a former senator from South Carolina who has played a key role in the rise of the Tea Party.

Last year, DeMint gave up his Senate seat to lead the Heritage Foundation, a powerful, conservative think tank, and his book Falling in Love with America Again comes out March 4. In it, DeMint quotes the 18th-century political thinker Edmund Burke, who argued that a person's love of country begins small, with a "little platoon" of family, friends and community.

DeMint talked to All Things Considered's Audie Cornish about the state of the Republican Party and what he thinks it will take to change Washington.

On his vision of a productive government

I'm concerned that America's going in the wrong direction. I know a lot of young people no longer believe the American dream is attainable for them, and this will probably be the first generation that has it worse than their parents. So if we're going to change the course of the country, we just have to remember what made us great in the first place. And it does begin with individuals and the "little platoons" that are around them.

On the Heritage Foundation's work

I know from being on the Hill for 15 years that it got to the point where we had good ideas from Heritage, but it was more [like] the members of Congress would just pat the Heritage folks on the head and say, "That's really cute, but we're gonna respond to ... some big lobby interest." ...

But the Heritage Foundation is continuing to provide the best ideas and policies. We've got 10 pieces of legislation that were shaped by our research that are now being pushed in the House and the Senate, and that number will expand as we go through the year.

On his defense of the Tea Party

There was no such thing as the Tea Party in 2006 when Republicans lost a majority in both houses. The Tea Party wasn't around in 2008 when we lost the presidency and the party nominated a moderate, John McCain. The only election they have won in the last decade was 2010, when a grassroots movement [developed] — some were called Tea Party, some were just Americans concerned about the direction of the country. And a lot of Republicans embraced that, and that helped them win the House. It brought Marco Rubio, Rand Paul, Pat Toomey, a number of new people to the Senate. But the Republican Party has not embraced those ideas. In fact, they've pushed them away.

On how to change Washington