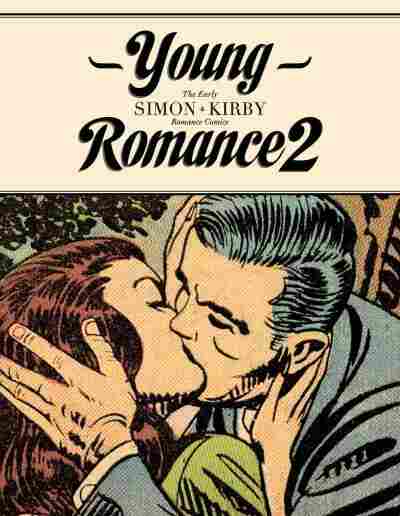 by Jack Kirby and Joe Simon

They're the perfect couple, circa 1947. He's craggy, yet banal. She's well-coiffed and febrile. The circumstances? Dire. Always. Just as unfailingly, though, love will out for these two, for we're on familiar turf: the geometrically ordered, narratively numbing world of mid-century comic-book passion. More specifically, this is Young Romance 2: The Early Simon & Kirby Romance Comics, a collection of some of the first such comics ever produced.

Note the "2" in that title. Publisher Fantagraphics has already made hay off romance comics with a previous volume in 2012 — a testament to our culture's appetite for kitschy, kitschy love. The only surprise is that, somehow, these comics don't feel passé. Even without going all the way back to the pop art of Roy Lichtenstein, we've been ironically enjoying romance comics for more than 20 years now — ever since the zine-makers of the early '90s incorporated them into the retro canon. For decades, comic couples have been stalwarts of advertising art, their faces close as they murmur words of love and fear — "I heard about your reputation ... taking pick-ups and running around with gangsters! But I don't care — Kiss me, Toni!"

And yet Young Romance 2 proves that overheated dialogue and agonal scenarios are still fully snicker-worthy. The titles alone are compulsively quotable: "My father bound me to a — MARRIAGE CONTRACT!" "Gil Warren ... knew a thing or two about handling a — GOLD DIGGER!" "I became known as the girl whose only date was a — BLIND DATE!" "This man I loved was a — MAMA'S BOY!" Then there's the art. Every hero is chiseled, every heroine virtually featureless except for her lips, (scary) eyebrows and carefully detailed ensembles. It's only the side characters who are at all interesting to look at, though many faces sink under masses of lines. Jack Kirby is widely considered a god among comic artists, but he wasn't aiming for the stars here. His skills aren't given their due by Fantagraphics editor Michael Gagné's unusual restoration technique; Gagné replaces the famous comic-book dots with swaths of opaque color, eliminating a layer of subtle expressiveness and diluting the vintage vibe.

The stories, though, remain intact. A couple are rather grim, like one in which a girl's father promises her in marriage to a friend from the factory. But such flickers of shadow are the exception to a tone that, if not rosy, is at least a warm beige. There may be a whiff of danger around a few stories' settings — the world of professional boxing, the "dingy tenement district," a dime-a-dance hall — but there isn't the violent undercurrent we take for granted these days. When a man gets grabby, his date bounds easily out of the car. If a man stalks the heroine, her steady appears within a few panels to put that cad in his place. There are a couple of occasions when the hero acts violently toward the heroine, but it's just so she'll sit still and talk through their problems. "Scratch away, you wildcat! You and I are going to have a talk!" he shouts, hefting her into his roadster. "Nancy, tell me — what do you expect to find in a blind date?"

Anyone familiar with these images from coasters and T-shirts will be looking for the clinch. It's that frame where the lovers, in tight closeup, smoosh their faces together like they're trying to hoover each other's blackheads. Surprisingly, not all these stories include a clinch. Sometimes the pair just gaze lovingly at each other, or clasp hands; other times the key moment is blocked by a fall of hair or a hat brim. Sexual attraction, like other forms of danger, is doled out in carefully measured portions.

And that's really the secret behind romance comics' continuing retro appeal. Like their very first readers, we crave a paradox: Passion united with control. Most of all, we need to believe that we've matured. Surely we've progressed far beyond the mid-century readers who shuddered at a drawing of a crashed jalopy and quivered at the sight of a tongueless clinch. Because really, romance is much better now — more honest, more sensual, more satisfying.

Read an excerpt of Young Romance 2