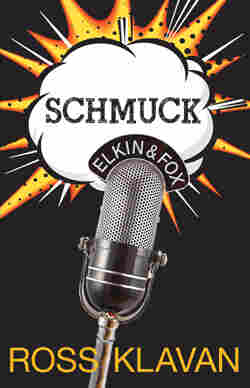 Beginning in 1952, and running through 1968, there was a legendary radio show called Klavan And Finch that was on WNEW in New York City. It was a four-hour live program featuring music and antic conversation between handsome, straight man Dee Finch and his live-wire counterpart, Gene Klavan.

Klavan's son, Ross, has just published an exuberant novel loosely based on his father's radio career. It bears the distinctive title Schmuck; the politest translation from the Yiddish would be "jerk." The characters — many of them "jerks" — who populate Klavan's novel speak fluent, mid-20th century New York-ese, which means their chatter is sprinkled with slang like "moolah," "Holy Moly" and "tootsie." Klavan also does a superb job conjuring up the cityscape of a bygone Manhattan, with its newsstands and watering holes. Granted, some landmarks — like P.J. Clarke's, the Friars Club and The Plaza Oak Room — still linger on, but the golden age when you could rub elbows at the bar with the likes of comedian Henny Youngman or boxer Rocky Graziano is long gone.

The plot of Schmuck touches on the inevitable tensions between the two famous radio sidekicks — here called Elkin and Fox — whose faces are plastered in newspapers and on highway billboards. Jerry Elkin is the funnyman who conjures up dialects for zany characters like Dr. Huckleberry the Viennese shrink and Mr. Nosh the deli man. Ted Fox is the golden-voiced straight man with an eye for a good-looking dame. The best looking dame of all in this tale is an 18-year-old high school senior named Sari Rosenbloom. (Ted Fox and Elkin's teenage son, Jake, are among her romantic conquests.) Sari lives in a suburban palace in Great Gatsby country on Long Island, and all comparisons to Fitzgerald's femme fatale, Daisy Buchanan, are intentional.

Klavan clearly has inherited his father's gift for comedy: Not only is his loony plot the narrative equivalent of a Rube Goldberg contraption (with surprise guest appearances by the likes of Frank Sinatra and comedian Soupy Sales), but the novel is replete with snappy conversations and descriptions. For instance, when the clever Sari is fixed up with a bland, WASP lawyer, she comments that he looks like "the offspring of a tennis court and a yacht."

Like the best comic novels, though, Schmuck isn't all fun and games. There's a sober subtext here and it has to do with the turbulent year when this novel takes place — 1969. Elkin, like so many of the adult men in this story, is a veteran of World War II; he carries the war around with him in a visceral way his son Jake can't ever understand. Here's a passage in which Elkin thinks about that generational divide:

"Elkin [had] taught Jake the rabbit punch, the knee in the groin ... the throat grab, the things he'd been taught in the jungle on Guam and Okinawa. [A]nd little Jake would go off to school as another trained Jap killer. Only he hadn't killed any Japs. And he hadn't held onto the bones, the insides, the bodies of those who'd been killed by Japs. And he hadn't been nearly killed himself. And Elkin ... would sometimes think of his son, Jake, and say [to himself], 'He doesn't know.'"

The generation gap is transforming the very streets of New York in this Vietnam-era novel: In one especially pointed scene, hard hat construction workers yell out greetings to the celebrity Jerry Elkin at the same time they try to beat up his long-haired hippy son. The goofy humor of an Elkin and Fox --and their real-life counterparts, Klavan and Finch — would also be collateral casualties of changing times and tastes. With a sure, light touch, Schmuck captures a transitional moment in the history of New York and the kind of entertainment that once kept the city laughing.