Accessibility links
Movie Review - 'The Grand Budapest Hotel' - Grand It Is Wes Anderson's eighth film, set primarily in a 1930s hotel, is just as stylish, precise, and nostalgic as his past films — and far funnier. (Recommended) 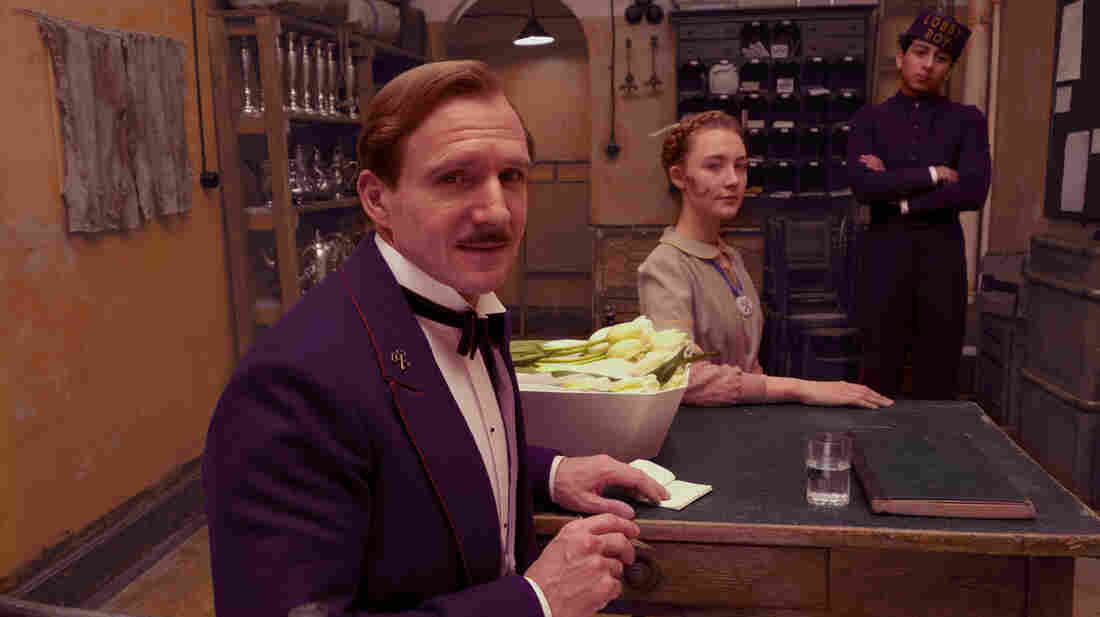 Gustave H. (Ralph Fiennes, with Saoirse Ronan and Tony Revolori) is a hotel concierge in an Eastern Europe falling under Hitler's shadow — a man pining for the Old World sensibility that's fading all around him. Bob Yeoman/Fox Searchlight Pictures hide caption

Rated R for language, some sexual content and violence

Chances are you've already made up your mind about Wes Anderson. Either you're willing to go with the meticulous symmetry of his dollhouse compositions, the precious tchotchke-filled design sensibility and the stilted formality of his dialogue, or you check out of his storybook worlds in the first five minutes. On the evidence of his eighth feature, The Grand Budapest Hotel, it's clear no one is more aware of his idiosyncracies than Anderson himself — and he's not apologizing.

Grand Budapest is a culmination of the tinkly music-box aesthetic of Anderson's work to date, turned up to 11. If you've already tuned out, all the two dimensional tracking shots, whip-pans, color coordination and stop-motion animation is going to come crashing down on you like a truckload of playfully plinking harpsichords. But if you meet Anderson on his terms, you'll reach the end and just want more.

The film's structure is a justification of the distant remove from anything resembling reality, with Anderson nesting the primary narrative within a series of framing stories. The primary tale is a zany caper set in the fictional Eastern European republic of Zubrowka, involving murder, stolen art, a prison break and a mountainside toboggan chase. At the center is Gustave H. (Ralph Fiennes), concierge of the mountaintop resort of the title, and his lobby boy Zero Moustafa (Tony Revolori).

That plot unfolds in 1932, but it's a story that, in the film, is related as an oral history in the '60s, written as a book some years later, explained by the author in 1985, and finally, at the outermost level of this series of Russian nesting dolls, read in the present day by a young woman in a cemetery. If the film seems removed from reality, it's no wonder: It's being filtered through decades, multiple perspectives, artistic license and a heavy shroud of nostalgia.

But then nostalgia has always weighed heavily on Anderson's work, and in Gustave, he's created a character even more attached to the past than he is. As the modern world creeps into Old Europe, the stately, exacting concierge constantly laments the lack of dignity and decorum of the advancing 20th century. This is a fact that, on the surface, seems at odds with his habit of sleeping with many of the hotel's elderly female guests, but for Gustave, this is both part of his enduring attachment to the past as well as a function of his hospitality. "I sleep with all my friends," he says matter-of-factly at one point.

His ongoing relationship with one of those friends, Madame D (a delightfully eccentric Tilda Swinton), becomes problematic when she turns up dead and her will leaves him a priceless painting. Her heirs — a bickering bunch headed up by her son Dmitri (Adrien Brody) and thug-for-hire Jopling (Willem Dafoe) — are none too pleased, and frame Gustave for the crime.

Anderson is well aware that there's great humor to be found in the mismatch between Gustave's Old World gentility and his promiscuity — not to mention his frequent bursts of profanity. Fiennes, a new addition to Anderson's usual stable of actors, proves perfectly suited to the director's arid comic timing, and the result is, in terms of volume and effectiveness of jokes, far and away Anderson's funniest film. He expertly mines the film's contrasting inclinations, making violent and often shockingly bloody jokes. Like much of early-'30s Europe, Zubrowka is on the brink of a fascist takeover, and Grand Budapest has some of the best Nazi-inspired humor since Mel Brooks' "Springtime for Hitler."

There's so much going on here, a constant stream of jokes, plot contrivances, film references, and images overladen with gorgeous detail, that it might all collapse in on itself if not for the relationship between Gustave and his young protégé Zero. For those playing at home, this checks another box off on the Wes Anderson bingo card — his recurring theme of the bond between surrogate fathers and sons.

More important, it gives the movie a beating heart beneath layer upon layer of careful and distancing artifice. There's much to admire on the surface of The Grand Budapest Hotel, but as with all of Anderson's best work, what lasts are the emotional notes it hits, almost invisibly. As Monsieur Gustave would surely agree, the mark of an expert lobby boy is to provide what the hotel's guests need without their ever knowing he was there. (Recommended)