Accessibility links
How Bad Directions (And A Sandwich?) Started World War I World War I began 100 years ago this summer. The spark — Archduke Franz Ferdinand's assassination — was dramatic, tragic and, in some ways, almost comic.

This is part of an All Things Considered series that imagines a counterfactual history of World War I.

World War I began 100 years ago this summer. It's a centennial that goes beyond mere remembrance; the consequences of that conflict are making headlines to this day. 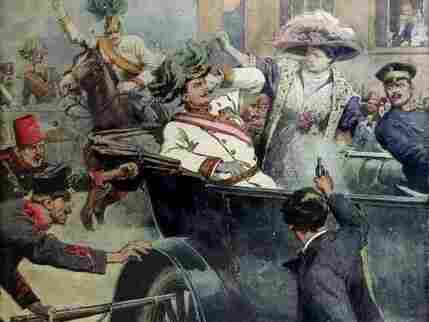 To underline that, All Things Considered wanted to turn history on its head and ask historians and listeners alike: What if World War I had never happened? (Submit your answer in the form below.)

If that sounds like an unlikely exercise, compare it to an even more unlikely event — the one that occurred on June 28, 1914, in the city of Sarajevo. It was the spark that ignited a global conflagration, a moment in history that was dramatic, tragic and — in some ways — almost comic.

Christopher Clark is a historian who's spent a lot of time reviewing the events of that day in Sarajevo and what led up to it. He's the author of The Sleepwalkers: How Europe Went to War.

"It's one of those subjects that — no matter how many times you go through it — it never loses its magnetism," he says.

Clark tells All Things Considered host Robert Siegel that despite warnings of a Serbian plot to kill the Archduke Franz Ferdinand, heir to the throne of the Austro-Hungarian Empire, the archduke and his wife went on a visit to Bosnia-Herzegovina. They had minimum security, and their motorcade route through the city had been published.

Partway through the trip, one of the cars was bombed and several people were injured. The tour was supposed to take a new route (but no one told the Czech-speaking drivers, who carried on as before). Clark says the miscommunication took the royal couple right in front of Gavrilo Princip, one of the assassins who was stationed on the original path, but it's a myth that Princip had just stepped out of a general store after buying a sandwich.

"Suddenly the car is in front of him [Princip], and to his astonishment the car stops because someone in the car is telling the driver, 'You idiot, you're not supposed to go down this road. Stop the car and back up,' " Clark says. "And just as the car comes to a halt ... he took these two shots."

The rest, as they say, is history.

The audio of this story - as did a previous Web version - includes the myth that assassin Gavrilo Princip purchased a sandwich before firing the fatal shots.