Accessibility links
Movie Review - 'Grand Piano' - A Panicky Pianist, Playing Like His Life Depends On It Eugenio Mira's thriller Grand Piano doesn't hit all of its notes perfectly, but it's daringly written — and ultimately compelling. 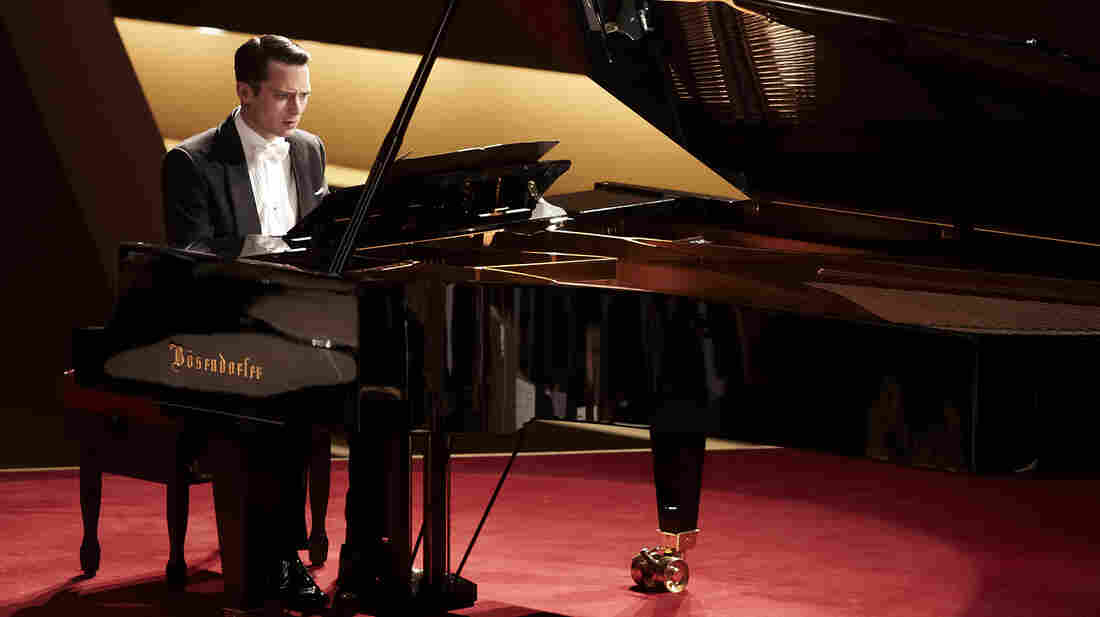 Tom Selznick (Elijah Wood) is a renowned concert pianist who's literally under the gun in Grand Piano, a Hitchcock-style thriller that plays out in real time. Magnet Releasing hide caption 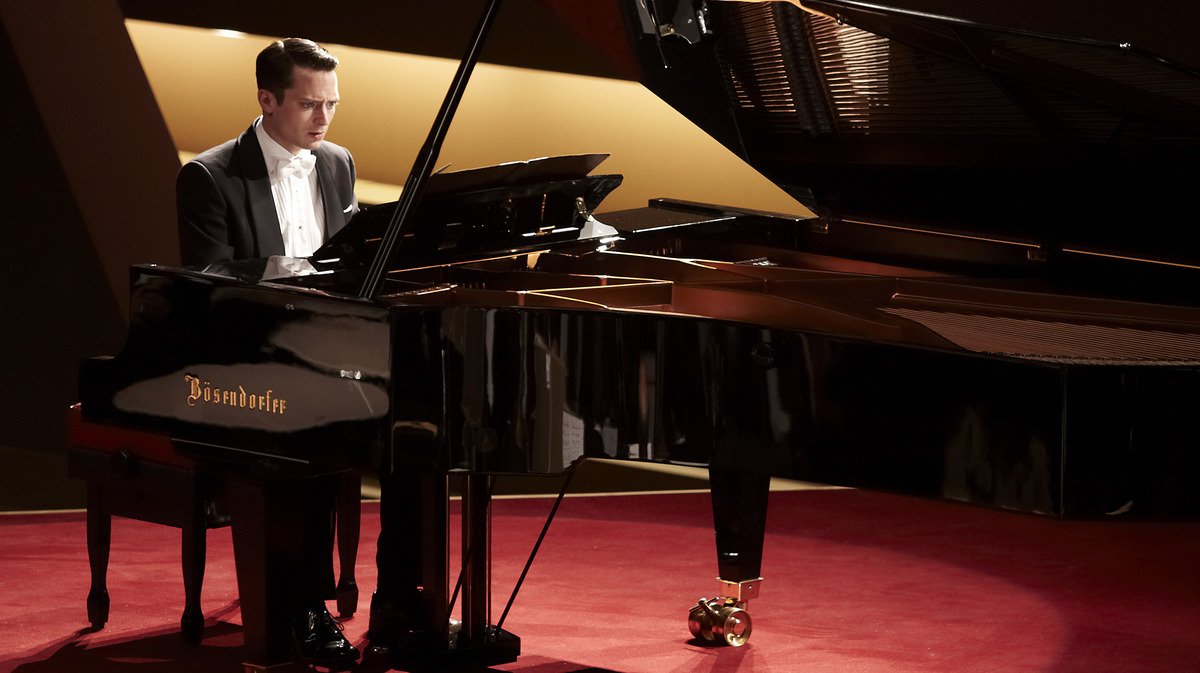 Tom Selznick (Elijah Wood) is a renowned concert pianist who's literally under the gun in Grand Piano, a Hitchcock-style thriller that plays out in real time.

Rated R for some language.

A world-renowned pianist known for cracking under the pressure of performance sits down to play a concerto before a packed hall. Then he sees the message scrawled in red on his sheet music: "Play one wrong note and you die." The movie almost writes itself.

The premise of the confined thriller Grand Piano has been characterized as "Speed at a piano," and while that's a little reductive, it also gets right this film's audacious essence. Grand Piano is a screenwriter's fantasy of a self-conscious Hitchcockian thriller, daringly written, improbably made — and more unbelievably made well. In fact, from the operatic direction to the pitch-perfect performances, everyone involved in Grand Piano seems on the same page, which will help audiences take the goofiness of the film's concept in stride.

Grand Piano immediately stakes out its territory with a nod to Die Hard, and indeed the film has also been compared to that movie set in a concert hall. Both movies introduce their main characters on airliners experiencing turbulence; when the guy in an adjacent seat sees the protagonist's anxiety, he assures him everything's going to be fine. To Die Hard's John McClane, that's a relief; to nervous wreck Tom Selznick (Elijah Wood), there couldn't be worse news. He was really hoping the plane would go down.

Tom's flying into Chicago to play a concert — his return to public performance after five years away from the spotlight. In his last notorious performance, he froze during "La Cinquette," a nearly unplayable piece written by his former mentor, now deceased. Pressure and expectations are now Tom's greatest enemies, and every reminder from the press, his colleagues and his actress wife Emma (Kerry Bishé) that this night is kind of a big deal only amplifies his anxiety.

Tom will play on that mentor's gorgeous 97-key Bosendorfer grand, and while his role as favored son and the dead man's towering shadow are parts of what drives Tom's panicky-perfectionist streak, that relationship is mostly left to loom in the past. The script, by Damien Chazelle — whose Sundance favorite Whiplash focuses more centrally on the musical mentor-protege relationship — is a focused, inventive machine that's constantly justifying its premise, mining tension by exploring how and why someone would train a sniper rifle on a brilliant concert pianist and demand perfection. When Tom realizes the threats on his sheet music aren't a prank — and meets his seemingly biggest fan (John Cusack) via earpiece — he's able to control his nerves just enough to play.

Cusack's aggressive, merciless sniper is a serious motivator for a man needing a reason to play without error, but the character's actual motivation for the test will prove far less interesting. (Oh well. Did anyone really care why Dennis Hopper wanted to blow up that bus?) Chazelle's script loses some of its boldness with a relatively predictable third act, but the direction never ceases to be a display of virtuosity. Once Tom steps onstage, Grand Piano proceeds essentially in real time, and Spanish director Eugenio Mira manages the feat of making the three-movement piano concerto the score of the film. He also injects comedy into what might have been entirely self-serious, and the bickering of a couple in the audience increases the sense of menace in the concert hall by contrast.

Mira caresses the material with expressive camera movement and sensational flourishes of color; most critically, he plays the audience finely, letting the weight of what's at stake rest on Tom's every closely-observed stutter and near miss as he's harassed by the sniper and his henchman. (Yes, that is Alex Winter). When Emma's life is also put in jeopardy, Tom fights back, and Mira ratchets up the stress levels as Tom tries to covertly alert someone while simultaneously playing the performance of his life.

It must be said that the fingers moving maddeningly quickly across the keys are nearly always Wood's; most of the movie is just Tom seated at the piano, strategizing, bargaining and fighting back, all while playing a convincingly world-class performance. One long take removes any doubt that Wood is giving a highly technical and physically demanding performance.

Grand Piano glosses on themes worth exploring more fully — relative talent and success between artists in a relationship, the creativity of a composer versus a performer's ability to execute that vision — but in a film of chills over ideas, it has the most to say when it comes to perfection, taking its own lesson and valuing human emotion over cold, flawless execution. Grand Piano doesn't hit all its notes perfectly, but it plays with an intensity that's admirable.