Accessibility links
Movie Review - 'Particle Fever' - Thrills, Chills And High Subatomic Drama What's possibly the nerdiest documentary ever made turns out to be one of the most inspiring, too. It's the inside story of the quest for a tiny, elusive particle of matter. (Recommended.) 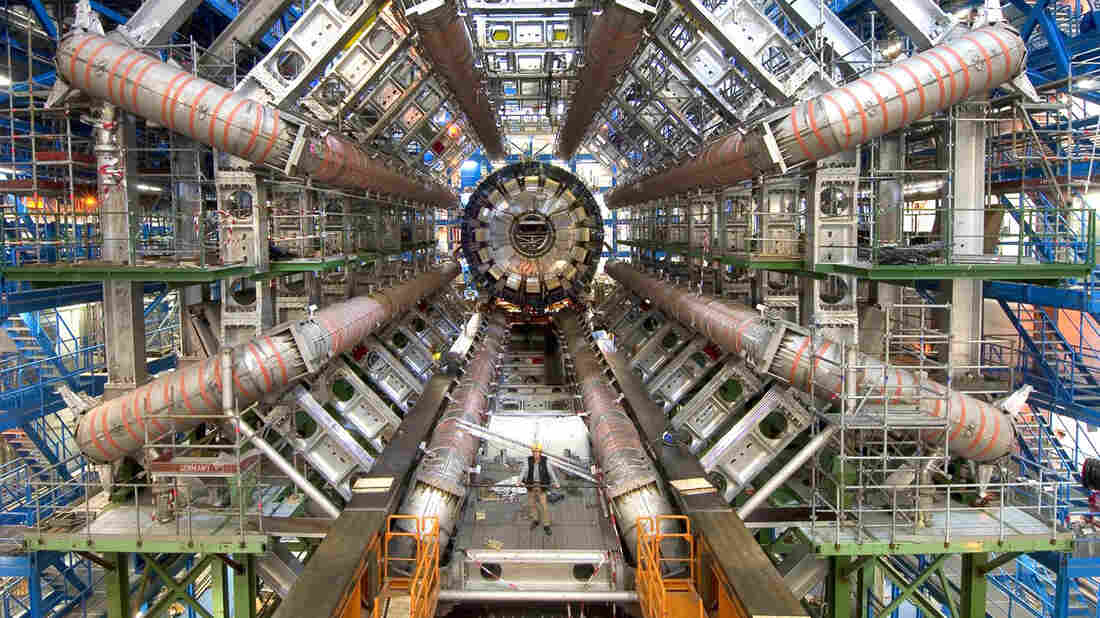 Yes, that is a man standing there, in the middle of this one small fraction of one experimental node of the Large Hadron Collider. CERN hide caption

All you really need to know about Particle Fever is that it includes footage of physicists rapping. About physics. Wearing giant Einstein masks.

It's that blend of earnestness and abandon that informs Mark Levinson's utterly absorbing documentary, a chronicle of the launch of the Large Hadron Collider and the search for the fabled Higgs boson, a subatomic particle long theorized but never located. The film takes a skinny 99 minutes to cover a five-year span and a territory as huge as the universe — bigger, actually, once you learn that some theorists think ours might be just one of many. It's jaw-droppingly cool stuff, explained with admirable clarity by an affable physicist tour-guide, David E. Kaplan, and wedded to the tale of a massive technological undertaking like nothing in history. ("The biggest machine ever built by human beings," as one scientist puts it.) And it's flat-out thrilling.

The Higgs boson, if you don't remember the headlines, is the one some people (not physicists) call "the God particle," and it's the key to a sprawling construct called the Standard Model, which particle physics uses to explain ... well, everything. Everything we know about how the universe works. Find the Higgs, confirm the Standard Model.

Well, sort of. Much — including the notion that there might be multiple universes, with many different flavors of physics — depends on the mass of the Higgs. That's why thousands of people teamed up to find it, spending two decades building this massive supercollider to smash beams of protons together, essentially recreating the Big Bang so they can measure the Higgs. Talk about a quest with some stakes.

Levinson's storytelling frames that quest so aptly that it's just minutes before you're rooting for the film's handful of protagonists: Kaplan, one of the theorists who frame the ideas about how the universe is structured; the wonderfully enthusiastic Monica Dunford, a postdoctoral student who's among the experimentalists trying to prove or disprove those theories; the magnificent Fabiola Gianotti, a classical pianist turned physicist who's in charge of the huge experiment Dunford is working on; the intense Nima Arkani-Hamed, Kaplan's friend and rival theorist; elegant Martin Aleksa, an Austrian experimentalist and father of two.

They're ridiculously geeked out when Google celebrates their work with a doodle on the day their phenomenal machine goes online. They party like the world's nerdiest rock stars that night. (It's where that hysterical rap act comes in.) Then, perhaps inevitably, there's a setback — what's got to be the most heartbreaking helium leak in cinematic history. Everything's suddenly at a standstill, and no one knows when it'll start up again.

Playing out amid stunning landscapes near Geneva, Switzerland, with side trips to visit the theorists at Johns Hopkins and Stanford and such, Particle Fever is an unexpectedly dramatic look into an area of inquiry so esoteric that most of us will never quite get our heads around it. But Robert Miller's playful music punctuates the narrative and helps underscore the stakes; witty graphics and animations help elucidate complicated theories.

And no, that setback won't be the end of the story. Particle Fever sticks with its endearing heroes until the Large Hadron Collider is patched up and humming along again, and thousands gather from all over to watch as the data begins to flood in. And we're there with them, inside the room, on the cusp of a monumentally significant scientific breakthrough.

The climax of the film is a pair of PowerPoint presentations — PowerPoint presentations! — in which these people we've come to root for interpret that data for an auditorium full of luminaries including Peter Higgs, the physicist who first posited the existence of the particle named for him. He inspires the crowd to cheers, which is wonderful. The presentations inspire lumps in the throat — which is an out-and-out triumph, for the physicists onscreen and the filmmakers who put them there. (Recommended.)