Accessibility links
What Germans Know Could Help Bridge U.S. Workers' Skill Gap American job training programs are failing to turn out enough skilled workers to fill job openings in the U.S. That's puzzling to some Europeans, who have a different system for training workers. 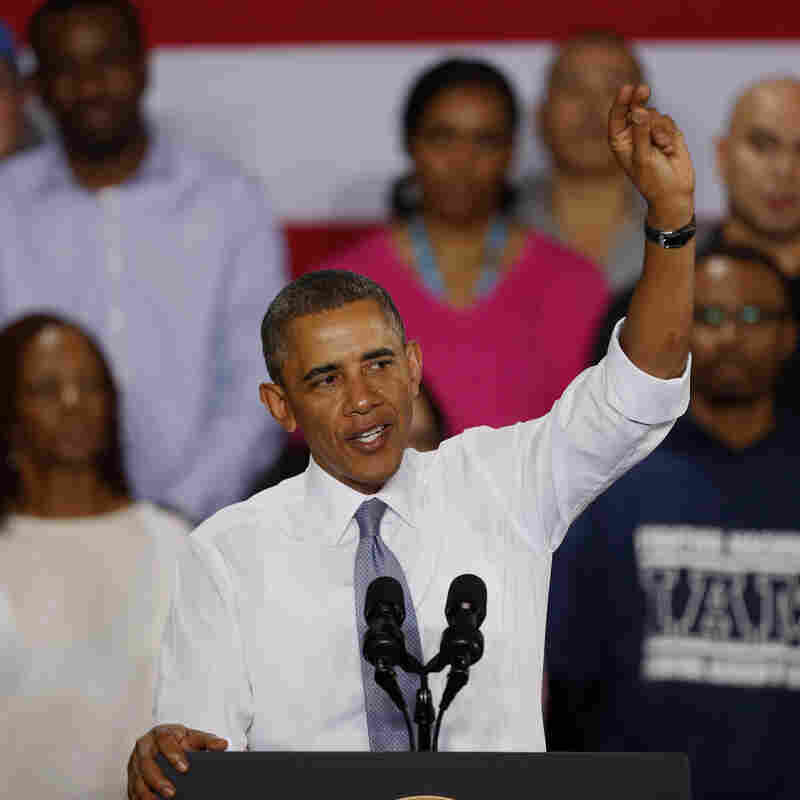 Job training programs are failing to turn out enough skilled workers to fill job openings in the U.S., a phenomenon that puzzles some European companies that expand into the U.S.

President Obama freely admits that America needs to improve the way it trains workers. In a speech at a General Electric manufacturing plant in Wisconsin earlier this year, he said, "We gotta move away from what my labor secretary, Tom Perez, calls 'train and pray.' You train workers first and then you hope they get a job."

In other words, not enough Americans are training for the jobs industry needs to fill. Nationwide, about 4 million job openings are going unfilled, but 10 million people are unemployed, according to Labor Department statistics.

The phenomenon is puzzling to some European companies that have expanded to the U.S. and are used to a more skilled workforce.

The German Way To Train Workers

The White House has tapped Joe Biden to review America's jobs programs, a move welcomed by the German American Chamber of Commerce in Atlanta, which represents about 1,500 German companies throughout the South.

"It's pretty much that middle gap," explains spokeswoman Martina Stellmaszek. "They have no problems finding engineers — there are great engineers in the United States — or really very low-qualified jobs — there is also no problem filling that. But it's really that middle segment where in Germany, we have the vocational training system to exactly train for that."

Stellmazek is referring to the three-year apprenticeship every German trade worker must undergo before being certified in a skilled job. They work three or four days a week at a company and go to school for the other one or two days. The Chamber of Commerce awards the certificates and sets standards for what is taught in vocational schools.

"If you have a certificate that you're an electrician, it doesn't matter if you do it in Hamburg or Berlin," Stellmaszek says. "Companies know what they get."

Europeans are often baffled when they try to hire U.S. workers, she says.

"You don't really know what you get," she says. "If someone tells you they're an electrician, they could have just exchanged light bulbs at an amusement park or they could have worked, maybe, at complex problems."

Stellmazek knows it's impossible to import such an elaborate program to the U.S. It's based on the guild system of the 1800s, and counts on reciprocity — workers trained by a company must work their first three years for that company before they can leave. But the program is also the reason Germany isn't seeing a skills gap like the U.S.

College Educations Instead Of Manufacturing Skills

Emory University economist Raymond Hill says America's go-to-college message, boosted by college financial aid policies, worked in the U.S. for a while as manufacturing went offshore. But higher wages in China and a U.S. energy boom have changed the manufacturing landscape as well as the kind of jobs available. Now, companies can't find workers with the right training, Hill says.

"If you tell everybody, 'Get a college education; that gets you into the middle class. Doesn't matter what you major in, you just need that college degree.' Well, is it any surprise?" he says. "Now we see this manufacturing coming back to us, and that's what we have to get ourselves prepared for."

Hill is banking on a local approach to create a skilled workforce, in which companies partner more closely with tech schools. In Tennessee, for example, Volkswagen partnered with Chattanooga State Community College to import the first full three-year apprenticeship from Germany.

Later this year, the Obama administration will award one grant in each state to a community college with the most promising job training program.