Accessibility links
Putting A Name And Face To A Famous Voice Aloe Blacc sang two of the past year's most ubiquitous singles. So why haven't you heard of him? 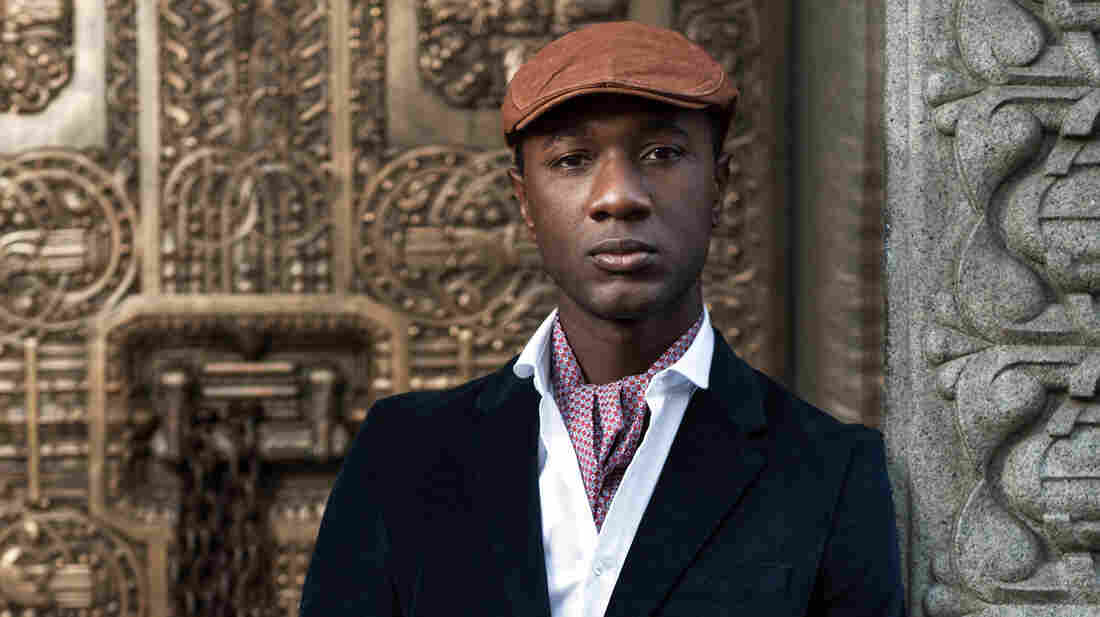 It's become the newest sports anthem: "The Man" by Aloe Blacc. The song is everywhere. Reid Rolls/Courtesy of the artist hide caption 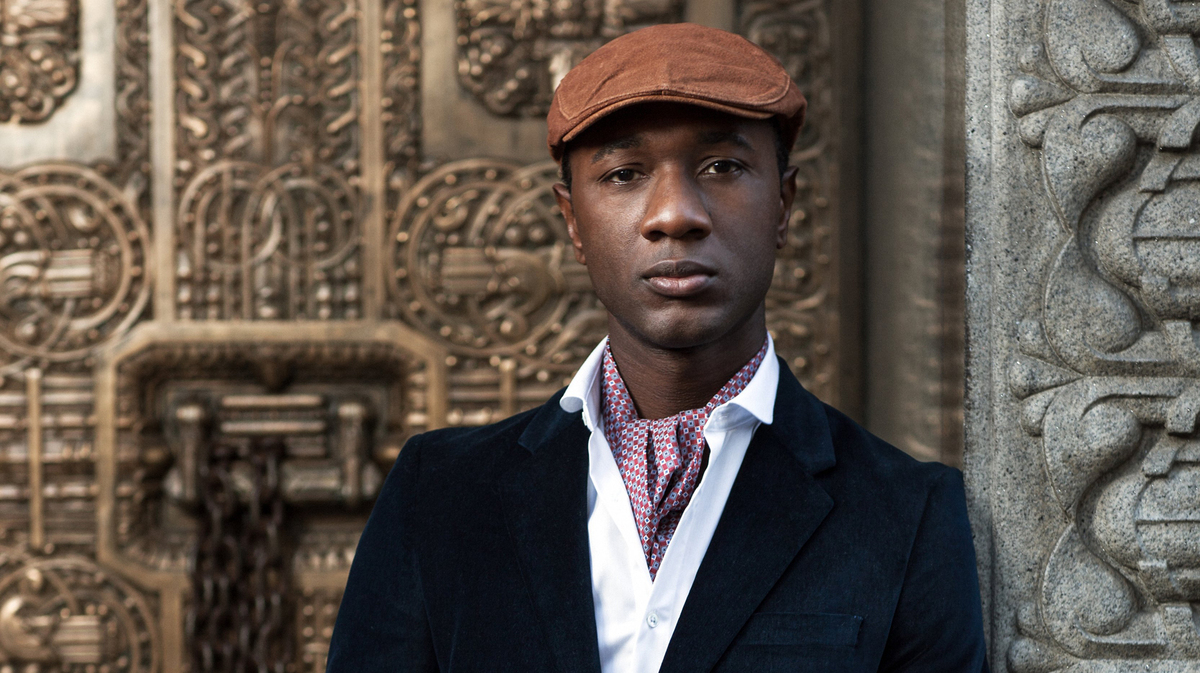 It's become the newest sports anthem: "The Man" by Aloe Blacc. The song is everywhere.

Reid Rolls/Courtesy of the artist

In February, the streaming service Spotify announced a milestone: "Wake Me Up," by the dance artist Avicii, was now its most streamed song ever at more than 200 million plays. The track, an unlikely union of country guitar and stomping electronic beats, has been a barnstorming hit for the Swedish DJ whose name appears on it. But the other star of the song, the singer who carries its tremendous hook, has stayed mostly in the shadows.

Aloe Blacc didn't just perform the vocals of "Wake Me Up" — he also wrote the lyrics, well before the collaboration with Avicii began. The California singer-songwriter says the concept came to him in a moment of disbelief: sitting in first class on a flight home from Geneva, where he'd been invited to perform at a conference – all expenses paid.

"It was just a moment where I felt like my life could get no better," Blacc says. "You know, from indie-label struggling artist to first-class flights? I thought, "Wake me up when it's all over.'"

Blacc wasn't listed as a featured artist for "Wake Me Up." His new album, Lift Your Spirit, includes a stripped-down, acoustic version of the song — but it's another track, "The Man," that is making its own dent in the charts and finding its way into major commercials. Blacc spoke with NPR's Arun Rath about licensing deals as a road to music stardom, writing lyrics to impress Dr. Dre and why it's sometimes better to keep side projects a secret. Hear the radio version at the audio link, and read more of their conversation below.

"Wake Me Up" has become an incredibly popular and successful song, but a lot of people don't know that that was your voice and your lyrics. How have people found their way to you?

I think online. There have been a lot of fans that have posted the song and added my name as the featured artist, and many radio stations that put the song in their programming. And if you have digital radio, they added my name to the credit, which was quite helpful.

Why was it not there initially?

I think the true answer would lie, I guess, in Avicii's camp. But from what I understand it was just an agreement his management had with the record label, that no artist would be featured.

Your voice is so distinctive; for those who know your music, it's pretty easy to tell right away that it's you.

Well, that's what I've heard from some folks who were familiar with my other music. They recognize the voice, thought it was familiar — they just didn't know who until their hunch got the best of them and they went to the internet to find out.

How did you work with Avicii on the song? He came to you, right?

Right. He was putting together his album and looking for a soul artist to sing some songs, so he contacted me and we met in the studio. We recorded an acoustic version with Mike Einziger [of Incubus] on guitar, and I drove home that night listening to the acoustic version over and over again, to become familiar with the song. A couple days later, Avicii made his dance remix, and that's ultimately what made it to the marketplace. But I'd always had an affinity for the acoustic version and wanted my fans to hear the song for its songwriting, not the steroids of dance music around it.

Your other big hit right now, "The Man," has been climbing up the Billboard charts, at the same time that "Wake Me Up" has sort of turned into a popular anthem. What is it about these songs that's worked?

Well, my goal, of course, is to make songs that are evergreen and that evoke a strong enough emotion to be memorable. "The Man" was a theme that I wrote based on an Elton John interpolation: I took one line from an Elton John song, and part of the melody as well, and made a loop of it. I come from a hip-hop background, and that's what we do quite often — however, hip-hop songs often use the actual recording. In this case I decided I would sing the interpolation and write lyrics around it. The music underneath it is inspired by a Russian folk song that I learned when I was in middle school, playing the trumpet in the school orchestra. And the lyrics I wrote were to try to impress Dr. Dre.

And did that work?

Well, the song ended up in a Beats by Dre commercial. So, I think it worked.

You've always had a pretty enthusiastic, but select, audience. It seems like recently you're finding bigger success in a way that's very reflective of the present: It wasn't radio that got behind you, it wasn't record stores. It's been this sort of third way.

It seems to me like the third way is sync licensing: It comes down to television shows and television commercials. It's been extremely helpful in my career. "I Need a Dollar" was the first, with the licensing for the theme of How to Make It in America, the HBO special. Since then, I've had a few songs that have been synched to television commercials and sporting events, and that's been extremely helpful in magnifying my voice, getting the music out there for people to hear, and decide whether they like it enough to go find it and buy it.

I think my favorite track on this new album might be "Love Is The Answer," which is a collaboration with Pharrell Williams. What was it like working with him?

I never thought I'd have the chance, but he happened to be in L.A. and Larry Jackson, who is the A&R at Interscope working with me, introduced us. I'd finished my album — at least, I thought I had. Pharrell was eager to challenge that notion by creating a new song, which we did within four to five hours, and I loved it.

What was the back and forth? How did he challenge you?

The challenge for him was to make something worthy of adding to an album I thought was complete. The challenge for me was working in a way that honored the art I had already created, and not necessarily being relegated to Pharrell's world — because of course he can do any kind of music, I just wasn't sure what he would deliver in this instance. But he did his homework, and he studied who I was and what I was about, and created something that I think fit perfectly. The concept I'm trying to portray is that no matter what happens in your life, if you're starving, if you're homeless, human compassion is the answer to these problems. We were able to do something that was, I think, analogous to my heroes — Michael Jackson, Bob Marley, Stevie Wonder — where you create a wonderful pop production and put an awesome message in the middle of it.

I read somewhere that you said you have thousands of songs on your hard drive that are never going to see the light of day?

I may have embellished the number a bit -- my relationship with DJ Exile, in a hip-hop group called Emanon, has yielded hundreds of songs. Right now we're sitting on about 40 songs that we have yet to release, and we're just figuring out what the best timing is. I'm not trying to compete in a hip-hop market; my goal is to write songs and be a singer, and make hip-hop music for fun. Besides that, I've got a bossa nova project, a country music project, a neo-soul project, and all of these are pretty much full albums. Who knows if they'll ever see the light of day — just part of my 10,000 hours, I guess.

'Good Things' And The Evolution Of Aloe Blacc

So with all these different styles in your head, how do you decide what to do next? Or will you go in a bunch of directions at once?

I've learned that too many directions at once kind of leaves me nowhere. What really worked well for me, in terms of my career, was focusing on soul music, for the Good Things album, and creating a singular character that my audience could recognize. It helped me to find the voice that I could use for singing. I've tried everything from dancehall to rock to contemporary R&B, and really what feels good is this folk-soul vocal. I will probably release songs that show my diversity as guest appearances on other people's projects, rather than on my own.

You say folk-soul, but even on this album you hit a lot of genres. Is there one you really want to do more with?

What would be really nice is to get into country music production and songwriting. I spend a lot of time crafting my words so that I can at least sit next to the best of the best songwriters, and I look at traditional country as some of the strongest songwriting that we've ever been able to deliver from the United States to the world of music. So hopefully one day I'll get to Nashville — work with some songwriters, work with some artists.

People used to make fun of Charlie Parker for listening to country music. He said, "Those cats know how to tell a story."

That's my goal. I feel, whenever a song becomes popular, that I've done a good job telling a story.