Accessibility links
City Versus Suburb A Long-Standing Divide In Detroit Detroit has long been a city divided among racial and economic lines. As the city attempts to recover, some see the change as an opportunity to heal those old wounds. 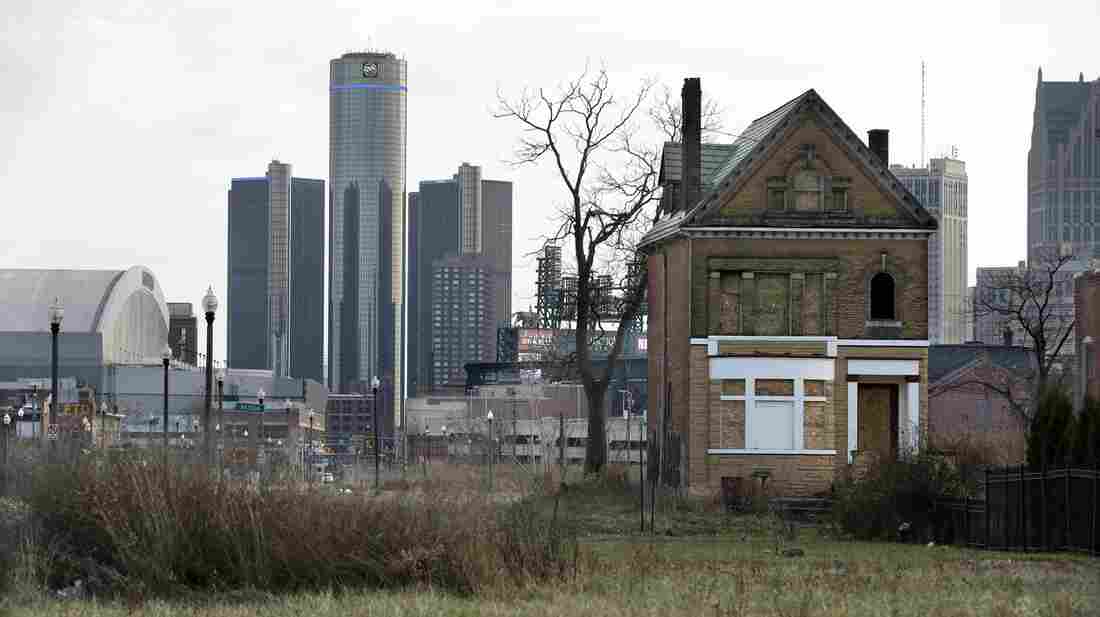 An abandoned home sits in an empty field in Brush Park, north of Detroit's downtown. The city is trying to recover from the largest municipal bankruptcy case in American history. Carlos Osorio/AP hide caption 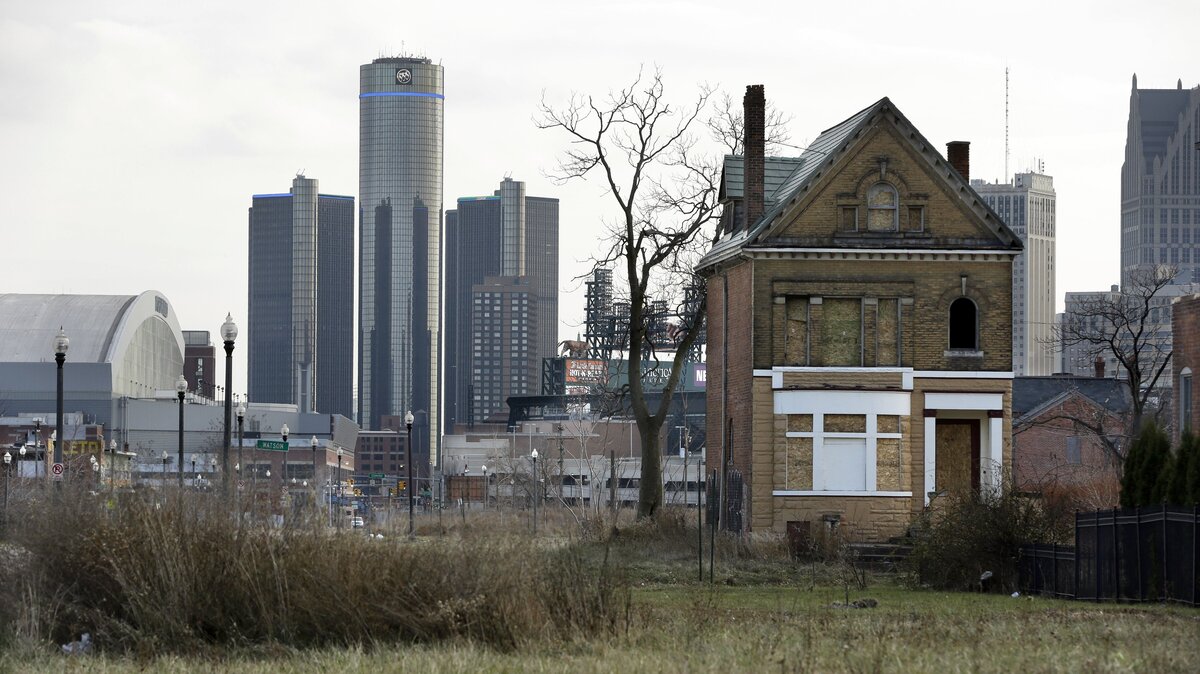 An abandoned home sits in an empty field in Brush Park, north of Detroit's downtown. The city is trying to recover from the largest municipal bankruptcy case in American history.

On the No. 34 bus heading out to the suburbs of Detroit, most of the structures are abandoned. But there are people at every stop, still living in the neighborhoods and still trying to get on with their lives during the city's financial troubles and recovery.

Lifelong Detroiter Fred Kidd, a rider on the No. 34, works at a car parts manufacturing plant in another one of Detroit's suburbs. This bus does not make it all the way to the suburbs; it stops at the city line.

"They're going to put us out when we get to the mall," Kidd says. "We're going to have to get on another bus."

It's hard to take one bus from Detroit to the suburbs. There is very limited bus service between the two, and there is no single regional bus system. Kidd says the current systems aren't reliable.

"They don't arrive when they're supposed to, and when they're late, people get upset," he says. "It's just a bad situation here."

So there's a frustrating, fairly broken bus system in Detroit, and then there's a separate, better public transportation system in the suburbs. The city and suburban lines aren't integrated, which says a lot about the dynamic between them. Macomb County and Oakland County are all communities just a couple miles outside Detroit, but in many ways a different world.

Mark Hackel is the county executive for Macomb County just northeast of Detroit. The county is doing well; businesses are moving in and there's a solid tax base here because the population has grown while Detroit's has been decimated. Hackel even has plans to fashion the riverfront near his office into a bustling boardwalk with condominiums and restaurants.

"They're coming from the city for various reasons: affordable housing, better quality of life and safer neighborhoods and schools," Hackel says.

Hackel says Macomb County needs a healthy Detroit, but there are limits to what he's willing to invest to make that happen. Detroit's emergency manager has floated a plan to regionalize the city's water system, which already serves the roughly 4 million people in and around Detroit. The idea is to get the suburbs to pay millions of dollars to lease the water system, but Detroit gets to maintain ownership. Hackel says that's a bad deal.

"I don't understand why we would do that," he says. "How do I explain that to the ratepayers? Ratepayers are going to say, 'What do we get out of it?' "

Hackel says he's all for regionalization, but his constituents are more concerned about fixing the public transportation system rather than bailing out Detroit.

"We're not getting people to and from jobs," he says. "I think regional transit is much more of a high-profile issue. It needs to be addressed, but again we're setting it on the back burner because they're going through a bankruptcy."

Hackel says there needs to be willingness on the part of the city of Detroit to reach out to the suburbs, and to want that support and that help where it didn't exist in the past.

Sheila Cockrel, who quit the Detroit City Council a few years ago and now teaches at Wayne State University, has felt that "us-versus-them" mentality for a very long time.

"The big question when I was on the City Council was: 'Where do you live?' " Cockrel says. "Like it was a badge of honor to live in a city where services didn't work, where police didn't come, where the lights weren't on, but it was ours and therefore if you were really one of us, you'd live here, too."

Rebuilding A Life And A City After Years On Detroit's Streets

Cockrel says cooperation has improved recently; the suburbs helped save the Detroit Zoo a few years ago and implemented a tax to raise money for the city's struggling art museum.

"So you've got these really good indicators, but you've also got these unresolved, under-the-surface issues that really need to be addressed for us as a region," she says.

Cockrel says that the biggest issue is race and that the pattern of racial segregation in the city of Detroit is one of the most intense in the country.

"I think that the politics of division, of race, have been drilled into the fabric of 8 Mile for so long that you just have really some dividing lines that need to be broken," Williams says.

The 8 Mile Williams is referring to is a complicated piece of real estate; the road essentially divides the city from the suburbs, where thousands of white residents moved after the 1967 riots. Williams says there is definitely a racial element to the tension between the historically white suburbs and the predominantly black city they left behind.

That kind of resentment sharpened after recent comments by the executive of one of Detroit's suburbs. In an interview with the New Yorker magazine, L. Brooks Patterson was quoted as saying that Detroit should be turned into an Indian reservation, where "we herd all the Indians into the city, build a fence around it and then throw in the blankets and the corn."

Patterson has since rejected the remarks, and says it was a sentiment he expressed 30 years ago that was used out of context. But when you listen to Williams, it's clear the damage was already done.

Despite the history of animosity between the city and the surrounding communities, Williams says there are signs that things are changing and that he remains optimistic about the future of Detroit.

"On other end of that, we've been let down many times before," he says. "But we're going to continue to operate with the faith that says we all want a better Detroit."

The divisions are closing, and one big sign, Williams says, is new Mayor Mike Duggan, the first white mayor to lead Detroit in 40 years. Duggan was elected by a population that's more than 80-percent black, and before he ran mayor, he was living in the suburbs.