Accessibility links
Groups Use Cash Prizes To Encourage Saving Organizations are trying to find ways to get people with lower incomes to save more. One program urges families to set aside a part of their tax refunds so they have money for emergencies. 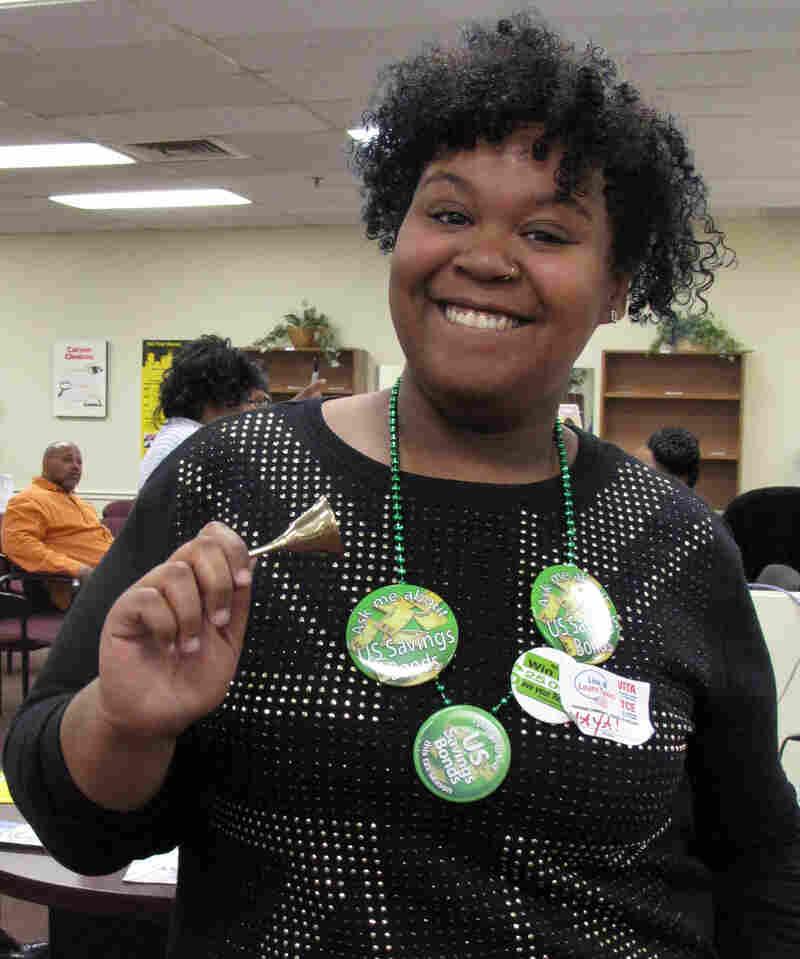 Maya Gaines, of the Baltimore CASH Campaign, tries to encourage people to put aside some of their tax refunds into savings. She rings bells, cheers and dances every time someone decides to do that. Pam Fessler/NPR hide caption 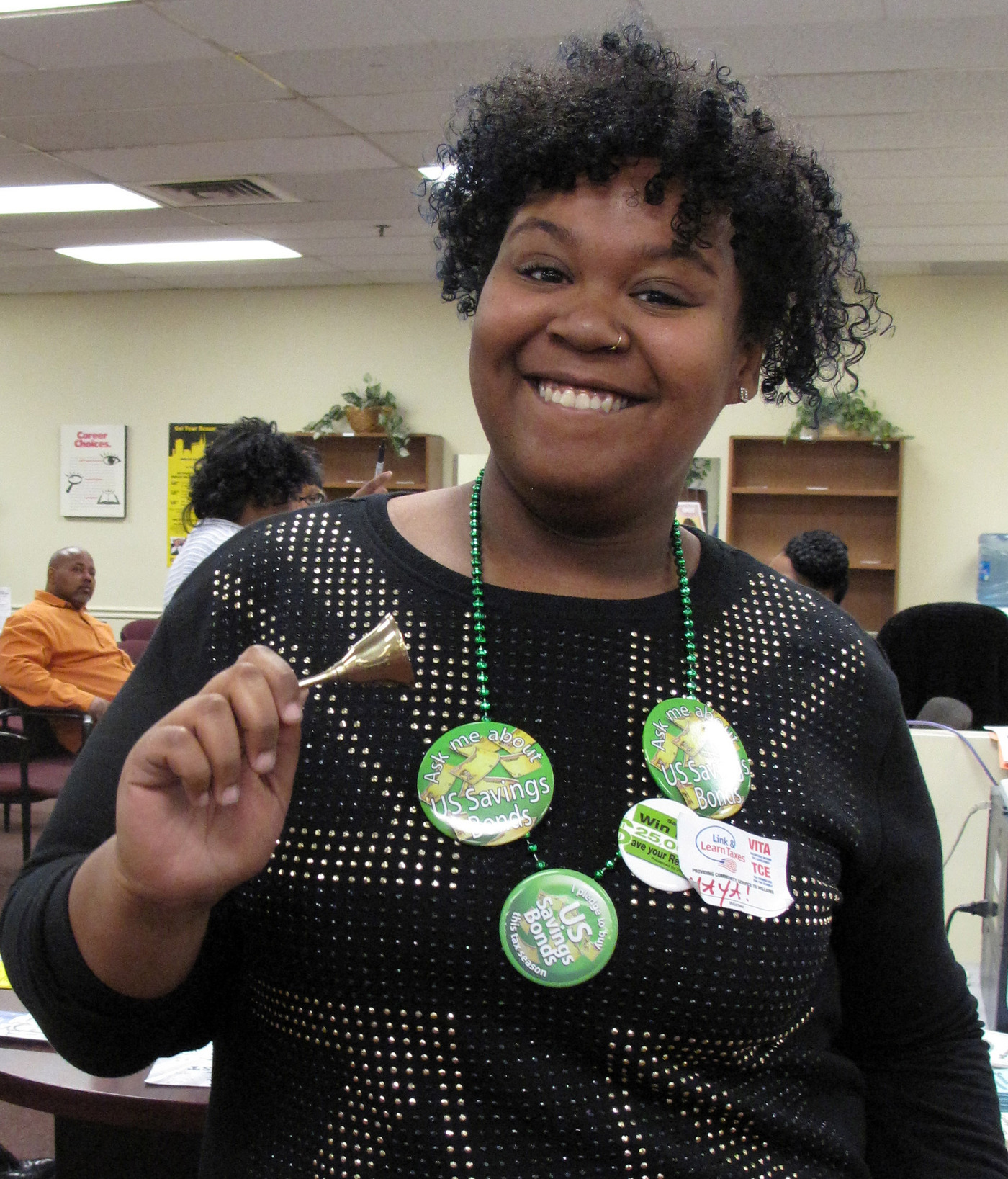 Maya Gaines, of the Baltimore CASH Campaign, tries to encourage people to put aside some of their tax refunds into savings. She rings bells, cheers and dances every time someone decides to do that.

When it comes to getting ahead in the world, a lack of savings can be a big hurdle, especially for low-income families. Most don't have enough money set aside for emergencies, let alone for college or a house. Some people think the answer is to make savings more fun, like the lottery, with the chance to win big prizes.

It's called prize-linked savings, something that's been available in Great Britain for decades. Now, it's starting to catch on in the United States.

One of the newest programs is called SaveYourRefund, launched recently by a nonprofit group called Doorways to Dreams. It's one of many organizations trying to find ways to encourage low- and moderate-income people to save more, especially at tax time. For some people, their federal tax refund is the biggest check they'll see all year.

So the group is offering one $25,000 grand prize and 10 weekly $100 prizes for those who agree to put some of their tax refund into savings, using Form 8888 on their tax return. The program is being promoted especially at free tax preparation sites that cater to low-income working families.

Joanna Smith-Ramani, of Doorways to Dreams, says for these families, even a little savings can make a big difference.

"At a basic level, people need savings to get them through even the smallest of financial shocks or their life just goes into total chaos and catastrophe," Smith-Ramani says.

Just one unexpected bill, she says, can set things off.

In Britain, 'Savings With A Thrill' 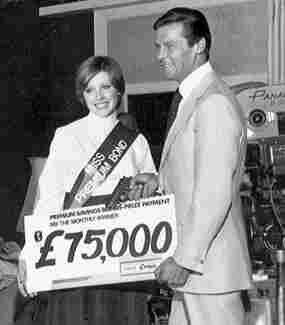 The United Kingdom has had a prize-linked savings program for decades, and its success has drawn the attention of those interested in expanding savings among low- and moderate-income families in the U.S.

Introduced to Britons as "savings with a thrill," the Premium Bond program was started in 1957 to encourage savings and fight inflation.

But instead of getting interest on their accounts, investors get a chance to win a prize. Individuals invest a minimum of £100 (about $150) to enter a raffle for monthly tax-free prizes, ranging from £25 to £1,000,000. Every £1 invested is another chance to win and over a million people win each month.

The bonds are extremely popular. Nearly 40 percent of Britons held them in 2006. The average bondholder invested the equivalent of about $2,330. Today, there are close to $70 billion in total holdings.

The program is also cloaked in a bit of British "Bond-like" intrigue.

Winners of the £1 million jackpot get a visit from an anonymous individual identified only as "Agent Million," who informs winners confidentially that they have won the jackpot. Agent Million also advises winners on investments and other options for handling the money.

In a 2012 interview with the Daily Mail, the woman who held the Agent Million job said it was great to see people's reactions when she gave them the good news.

"It can be emotional and a lot of people cry. One of my favorites was a woman who had just sold her house as she couldn't afford to keep it — and then with the news, her financial worries were gone." she told the paper.

"Your car breaks down. You can't pay for it. You can't access other credit. Your family can't help you. How are you going to get to work?," she says, adding that could then lead to loss of a job.

But getting people with so little money to save can be a challenge.

"I need every penny, I need every penny, " says Baltimore truck driver Wilbert Braxton, who's waiting for free tax help at a site run by the Baltimore CASH Campaign (the acronym stands for Creating Assets, Savings and Hope). He says he tries to save money, but always needs it before too long.

"Bills, bills, and bills. You know, that's my life. I work and pay bills. I got two kids in college. They need everything. You know, loans have to be paid back," he says, adding that he also has car payments to make.

And his comments are pretty common.

Still, research shows that low-income people, who might think they can't save, do spend a disproportionate share of their income on lottery tickets and gambling, on the off chance they'll hit it big. And it's that desire to win that proponents of prize-linked savings are trying to harness.

Maya Gaines, with the Baltimore CASH Campaign, tells her clients that they can do both — save and maybe win — if they split off some of their tax refund into savings.

At first, Jordan is skeptical. But then, about an hour later, he's changed his mind. His tax preparer has convinced Jordan that it makes sense to use $50 of his refund to buy a U.S. savings bond. Like everyone else at this site who decides to save, he's greeted with bells and cheers.

"Well you know, money grows" Jordan says. "And savings bonds are where it's at, for now. I just thought it was a good thing."

And others seem to think so too. The Baltimore CASH Campaign says tax-time savings jumped almost 500 percent, to $34,000, the first year it offered cash awards.

And in Michigan, almost three dozen credit unions have seen a big growth in savings since offering prizes as part of another program called Save to Win. Now credit unions in three other states are doing the same.

And there's a bipartisan effort in Congress to pass legislation that would allow banks to offer such programs as well.

Lori Wesp, a single mother in Rochester, N.Y., says the prizes make a difference to low-income people like her.

"It's hard, paycheck to paycheck, paying everything, so when you get a little incentive like this, it helps out tremendously," she says. Wesp recently won $100 in the SaveYourRefund promotion in Rochester, after setting aside half of her tax refund to help pay for her daughter's summer camp.

The prize isn't much, but Wesp already knows how she's going to spend it.

"At least half of it on a bill, and then spend half of it, maybe take my daughter and my dad out to a nice dinner or something," she says.

And on the off chance she wins that $25,000 grand prize later this year?

"Pay off my van, so I don't have that stress of that hanging over me. And I would probably take my kid to Disneyland. And then I really would like to go back to school," Wesp says.

It's just the kind of long-term investment that groups like Doorways to Dreams hope people like Wesp will make.