Accessibility links
Customer Surveys Are Here To Stay. Suggestions For Improvement? Companies want to know what you think of their product — and they're not afraid to ask. Surveys might be annoyingly pervasive to customers, but they provide valuable information for a low price. 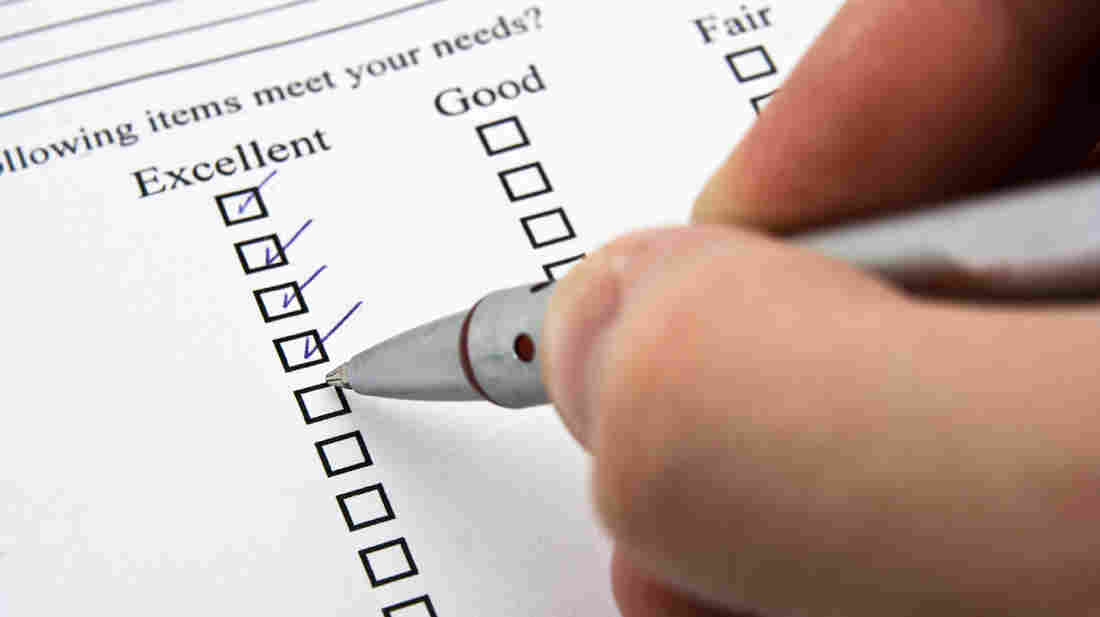 Washington Post advice columnist Judith Martin compares surveys to an insecure friend: " 'Are you sure you like me? Really? Do you like me?' And after a while you want to say, 'No! Go away!' " iStockphoto hide caption

Call the cable company, and an automated voice wants to ask you about the experience. Buy a taco at a fast-food chain, and the receipt says there's a chance to win $500 if you answer a few questions.

Customer surveys seem to be everywhere — something Judith Martin addressed in her Miss Manners column in January: "They are violating the first rule of business: Don't annoy the customer."

But sometimes even customers who prefer to click "no" will choose "yes" if something is important to them.

You can count Heather Williams of Penfield, N.Y., in this crowd. Williams says ordinarily she does not respond to surveys because she doesn't think companies are really listening to her. But her daughter recently applied to Brigham Young University through the school's website, and they received a survey request through email afterward.

"It was nice to have someone ask my opinion on the process, which can be very daunting," Williams says. "And I will admit, it was nice to be able to get a free sweatshirt."

Businesses have a powerful incentive to keep the customer surveys popping up. While demographic and purchase data tell a company who, what, when and where, surveys can tell a business "why" — and that's valuable information.

"You're always going to want to understand the consumer psychology: why are people doing what they're doing," says Eric Bradlow, professor of marketing, statistics and education at the Wharton School.

He says surveys, especially those delivered electronically, also help companies identify mistakes quickly so they can correct them. A survey could help a business identify a defect in a new product or a particular cashier who is rude.

They can even be a form of advertising because of a psychological phenomenon called the mere-measurement effect. "If I ask you, 'When's the last time you bought a taco at Taco Bell?'... you're more likely to buy a taco at Taco Bell after asking you the survey," Bradlow says.

And for all of these potential benefits, surveys are relatively cheap. The Internet makes getting a survey to customers as simple as a pop-up when you visit a company's website, and essentially, firms are putting their customers to work gathering information that could help the company's bottom line.

So even if the surveys are annoying enough to actually turn customers away, they may be worth the risk, Bradlow says.

The solution he suggests? More data. If someone always click "no" on survey requests, a business could measure that and stop asking.

Now that you know why there are so many surveys out there these days, we want to know whether you found this story informative. Would you mind filling out a survey?