Accessibility links
You Must Read This: 'The Miernik Dossier' In his 1973 debut novel, The Miernik Dossier, former CIA agent Charles McCarry combines a classic Cold War thriller with a road trip. Olen Steinhauer says it's one of the best spy novels ever written.

A Circle Of Spies Hit The Road, Filling A 'Dossier' Of Mystery

A Circle Of Spies Hit The Road, Filling A 'Dossier' Of Mystery 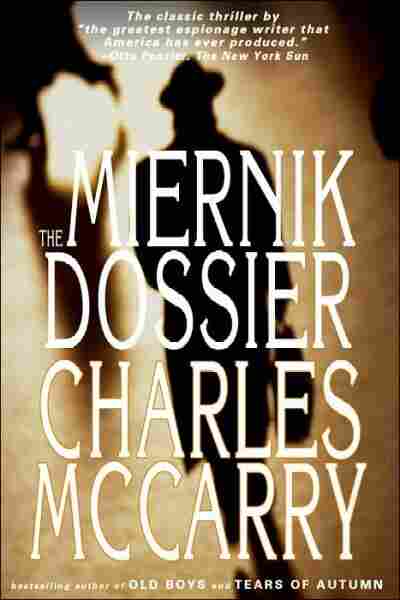 A few years ago, I spent the winter in Germany, teaching at Leipzig University. I'd never taught before, and it was exciting, particularly because one of the classes I'd come up with was a survey course on spy novels. The class filled up quickly — those resourceful Leipzig students recognized an easy A when they saw it — and I was eager to share the best of an often-maligned genre with them. We looked at W. Somerset Maugham's Ashenden stories, Eric Ambler, Graham Greene, John le Carre, Len Deighton, and Alan Furst. Then I introduced them to Charles McCarry's debut novel, The Miernik Dossier.

Chances are that you haven't read this novel, and probably haven't even heard of it. But Charles McCarry's chronicle of a disastrous road trip from Geneva to the Sudan is one of the best books the spy genre has to offer. It's both cerebral and ridiculously entertaining, a textured character study and a thrilling ride into the unknown. At the end of the semester, I had my students vote on their favorite book. The Miernik Dossier won, hands down.

Published in 1973, The Miernik Dossier takes place in 1959 and is, as the title suggests, an epistolary novel, a dossier on one Tadeusz Miernik. The preface tells us that the entire text has been "submitted to the Committee in response to the request by its Chairman for 'a complete picture of a typical operation.' " It's made up of agents' reports, written communications, transcripts of phone conversations, "surveillance reports, diary entries, biographical sketches" and footnotes.

While all this suggests a dry rendition of events, it's quite the opposite. McCarry spent nearly a decade working deep cover for the CIA, and as a result, his story rings true in many ways. But what really makes the novel so entertaining is the wonderfully disparate cast of characters he's assembled. There's Paul Christopher, the CIA agent who moonlights as a poet — a character who goes on to feature in many of McCarry's novels. There's the bitter British agent, Nigel Collins; the sultry Hungarian concentration-camp survivor, Ilona Bentley; the flamboyant, 7-foot Sudanese prince, Kalash el Khatar; and the bumbling, possibly naive, Tadeusz Miernik.

The story revolves around a single question: Is Miernik, a Polish citizen, an agent of his communist government, or a victim of it? The question is important because Miernik's U.N. employment contract has lapsed, and he's begging his friends — most of whom are foreign spies — to help keep him from being kicked out of Switzerland and sent back home.

As the agents circle, trying to figure him out, a deus ex machina descends: Prince Kalash el Khatar must drive an air-conditioned Cadillac home to his father and wants to make a party of it with his friends. Miernik insists on joining them. If he's a victim of communism, then this is his escape to freedom. If he's a communist agent, then this trip may be part of a grand scheme.

What begins as an expat novel becomes a road novel, and once they reach the Sudan, where the countryside is troubled by the Anointed Liberation Front, a Soviet-backed terrorist group, the urgency and danger are ratcheted up to a fever pitch.

One of the many gems in the novel is a scene halfway through the story, when the friends stop at a restaurant in the Alps. They notice a group of German revelers and guess that the singing, drinking men are ex-SS officers. Miernik, the scars of the second world war still fresh, goes moodily silent for a while, then walks over with a knife and says to a German woman cradling a Pekingese, "I want to kill your dog." Stunned silence, then anger.

"Hand over the dog," he continues. "We have been watching you and we have our orders. The dog must die." Despite their protests, Miernik goes on: "How long have you been hiding this dog? Speak up — and remember there are witnesses present."

"Who are you?" asks the German.

"My name does not matter," Miernik explains calmly. "It is enough that you know that I am an officer in the Dog Death Brigade. You have forgotten that dogs are not human beings. They are dogs. Dogs. Dogs who are shitting on our sacred soil, taking food from the mouths of good human children."

It's a wonderful scene, full of layered black humor, and my students spent a good half-hour discussing its meanings, and how they, as Germans, felt about the way it portrayed them.

For a novel written 40 years ago, The Miernik Dossier is shockingly modern, from its experimental structure to its exploration of terrorism. Yet what's most modern about this breathtaking novel is the way the central mystery of Miernik himself is answered, or not answered, by the final page. Much like real intelligence work, the answer depends as much on the analyst — that is, you, the reader — as it does on the facts at hand.

Olen Steinhauer's most recent novel is The Cairo Affair.