Accessibility links
Spirited Sweets For St. Patrick's (Or Any) Day The typical green-themed cookie or cupcake is no match for these alcohol-infused treats. Celebrate with Kahlua cake, a mint-liqueur milkshake, wine-soaked fruit salad or beer-glazed bacon candy.

Spirited Sweets For St. Patrick's (Or Any) Day

Spirited Sweets For St. Patrick's (Or Any) Day

Cooking With A Cup O' Kindness (Beer, Cider Or Booze)

Bourbon Balls Give A Sweet Kick To Kentucky Derby

On Saint Patrick's Day, often the first order of business is to raise a glass to the Irish with a frosty mug of green beer. You might also savor a slice of Irish soda bread, rich with raisins and caraway seeds, or tuck into a hearty dish of corned beef and cabbage.

But when March 17 rolls around, don't neglect the desserts. You could certainly stick to traditional offerings like shamrock-shaped cookies and emerald-tinged cupcakes. But I tire quickly of all that blazing green. I prefer to punctuate a festive meal with alcohol-infused sweets, from a decadent chocolate Bundt cake to a creamy mint milkshake.

There's also a bowl of oranges, grapes and dates macerated in white wine, and baked bacon "candy" — crisp and mahogany-hued with a glaze of beer, brown sugar, mustard and thyme.

Nearly any sweet creation you can think of could get a boost from a splash of spirits. In baked goods, spirits impart not only flavor but also moisture that creates a sumptuous, tender crumb. Think brownies and cakes soused with beer, or cupcakes laced with gin.

Alcohol provides an adult upgrade to childhood ice cream favorites such as popsicles, sundaes and floats. Add some zing to a frozen blueberry pop with an injection of vodka, jazz up a hot fudge sundae with a splash of scotch, and pep up the retro root beer float with a dash of rum or vodka.

White and red wines marry beautifully with just about any fruit, from berries to bananas. On a cold wintry night, I'll happily sit down to a bowl of sliced pears poached in butter, honey, rum and a touch of cinnamon. Dare to be extravagant and top this dish off with a big scoop of vanilla ice cream.

Desserts made with alcohol date back to antiquity. In the ancient Roman cookbook Apicius, "sweet wine was paired with fruits as a syrup and used to flavor cakes," says Lynn Oliver, editor of The Food Timeline. During medieval times, liquor acted as a preservative in baked goods such as English fruitcake. In the U.S., the colonists used alcohol liberally when creating sweet dishes.

Laura B. Weiss' work has appeared in numerous national publications, including The New York Times, Saveur, Travel + Leisure, and on the Food Network website. She's a contributor to Interior Design's blog and was an editor for the Zagat Long Island Restaurant Guide 2009-2011. Laura is the author of Ice Cream: A Global History. Follow Laura on Twitter, @foodandthings.

"Brandy is all over the first American cookbook by Amelia Simmons," writes Michael Krondl, author of Sweet Invention: A History of Dessert, in an email. Then during Prohibition, liquored-up desserts largely fell out of favor. Recently, though, desserts made with spirits have experienced a revival, perhaps mirroring the recent cocktails renaissance.

So, does alcohol burn off when you cook or bake it? Not completely. But a cake likely retains more spirits than, say, a sauce does.

"I would think that whatever alcohol is lost in baking is considerably less than what is lost when you boil or flame alcohol in cooking," writes Dorrie Greenspan, the author of Baking: From My Home to Yours, in an email.

If you want the flavor of spirits but not the buzz, try extracts, which contain little or no alcohol. For recipes calling for light rum, for example, the flavorings company McCormick & Co. recommends substituting 1/2 teaspoon of imitation rum per tablespoon of spirit.

Buzzed or not, these sweets are my standbys for St. Patrick's Day or any occasion that calls for a dramatic dessert.

This cake, adapted from a 2005 Gourmet recipe for Chocolate Whiskey Bundt Cake, is rich and delicious, and the coffee liqueur heightens the intensity of the chocolate. This cake improves in flavor if it's made at least a day ahead, and it can be stored in the refrigerator for up to 5 days. Bring the cake to room temperature before serving. 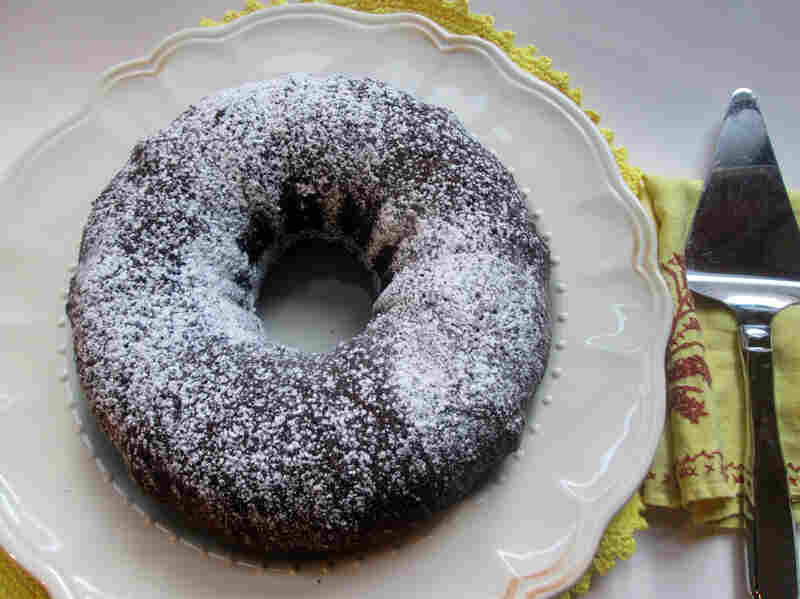 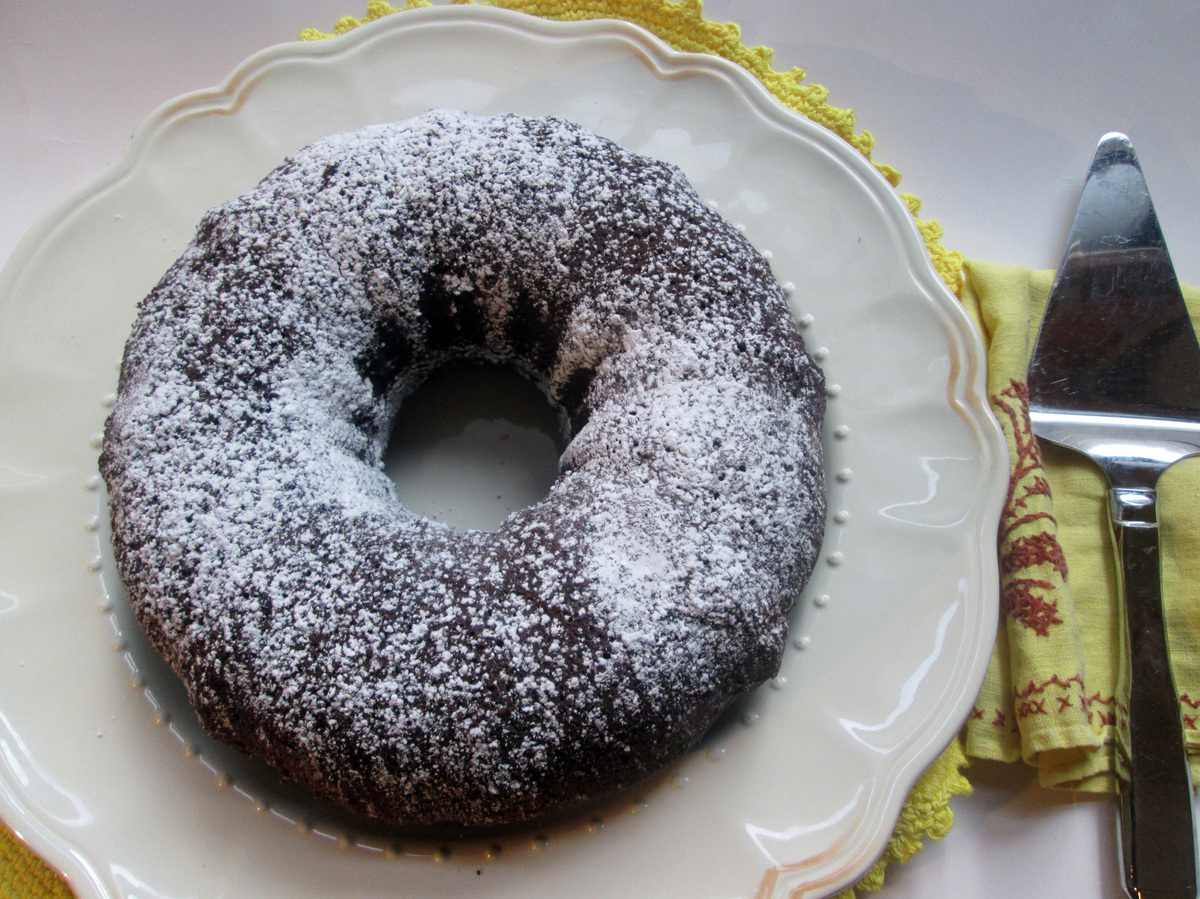 1/2 cup coffee-flavored liqueur, such as Kahlua

Place oven rack in the middle position and preheat the oven to 325 degrees F. Butter a 10-inch Bundt pan well, then dust it with 3 tablespoons cocoa powder, knocking out the excess.

Heat the coffee, coffee liqueur and butter and the cup of cocoa powder in a medium saucepan over moderate heat, whisking until the butter is melted and all the ingredients are combined. Remove mixture from heat, then add white and brown sugars and whisk until dissolved, about 1 minute. Transfer the mixture to a large bowl and cool for about 5 minutes.

While the chocolate mixture cools, whisk together the flour, baking soda and salt in a bowl. In a separate bowl, whisk together the eggs with almond or vanilla extract, then stir into the cooled chocolate mixture until it's combined well. Fold in the flour mixture until all of the ingredients are combined. (It will take some elbow grease to combine the ingredients; the batter will be mostly smooth, but don't be alarmed if there are a few small lumps.)

Pour the batter into the Bundt pan and bake it until a toothpick or skewer inserted in the center comes out clean, 30 to 35 minutes. Watch the cake closely. It goes quickly from moist to overbaked.

Cool the cake completely in the pan for an hour. Loosen the cake from the pan using the tip of a small knife, then invert the rack over the pan and turn the cake out onto the rack. Cool the cake on the rack for another hour.

Dust the cake with powdered sugar.

Though I trembled at the thought of tinkering with a recipe by the iconic Italian cookbook writer Marcella Hazan, tinker I did. Her recipe for Macerated Oranges and Grapes with Toasted Slivered Almonds from The Classic Italian Cookbook, called for orange liqueur but I liked the lighter taste imparted by white wine. I also added dates and nuts for color and texture. 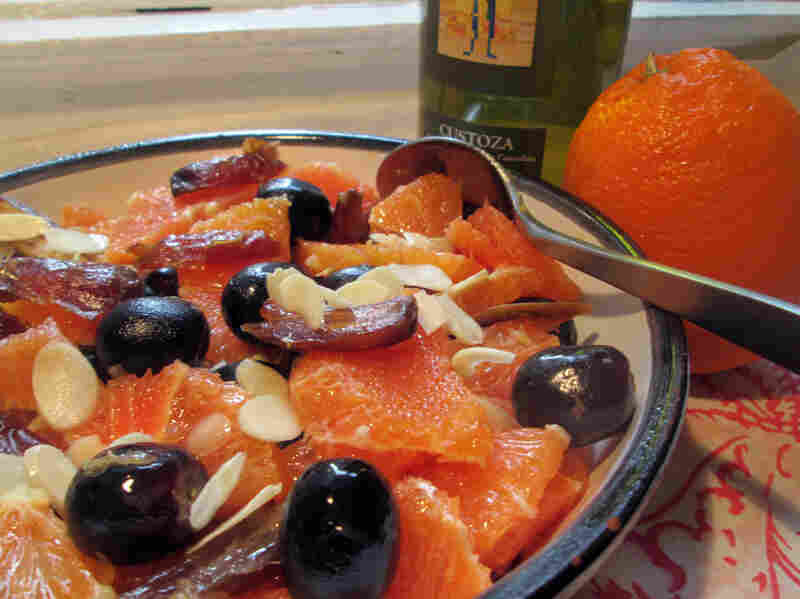 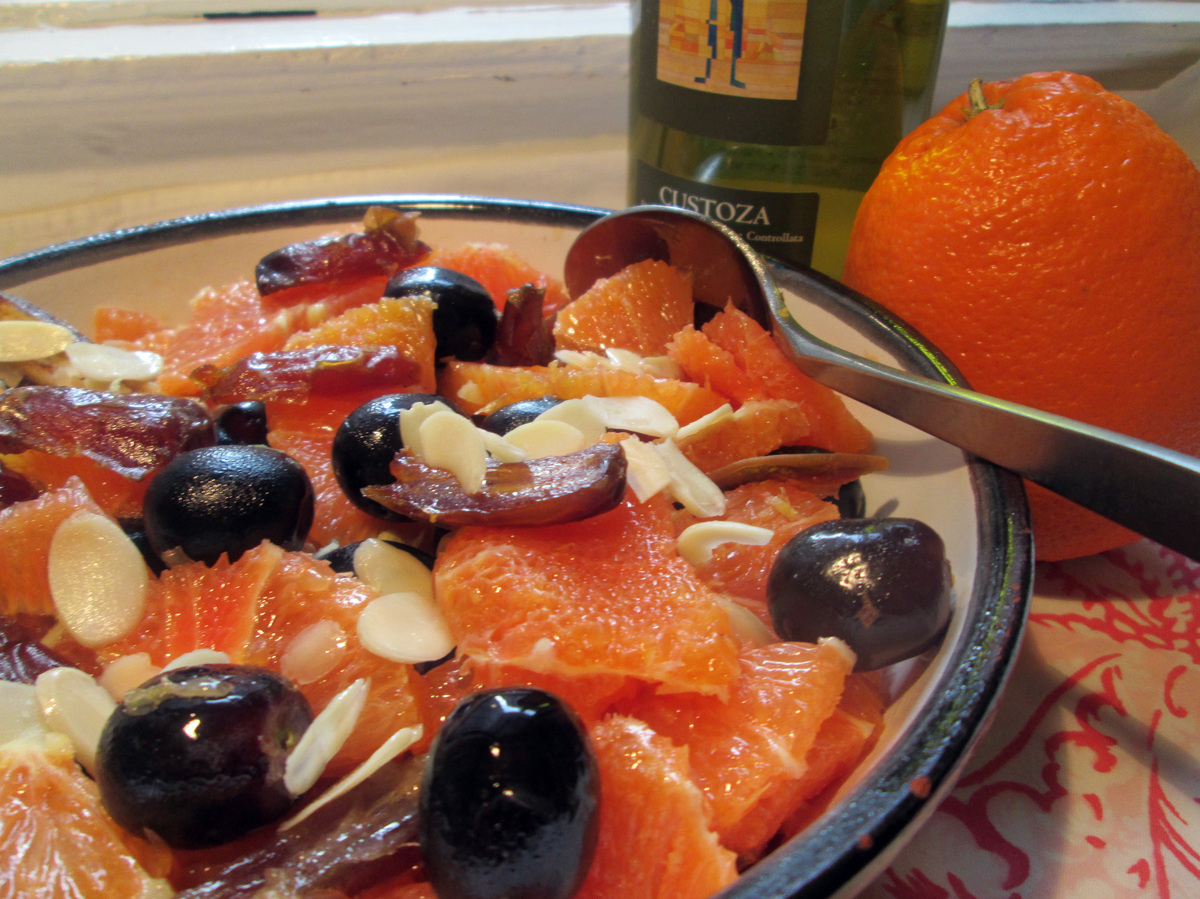 6 Medjool dates, cut in half vertically, pitted then cut into quarters

With a sharp knife, cut off the ends of the oranges and peel them. Remove as much of the pith as possible, being careful not to cut into the flesh of the orange. Cut the orange in half, then into quarters. Cut the quarters into 1/2-inch slices.

Put the oranges, grapes and dates into a bowl. Using a zester or the finest teeth on a box grater, grate the lemon peel into the bowl. Add the lemon juice. Add the wine and the vanilla. Toss the fruit salad gently, cover it and place it in the refrigerator for at least an hour. When you're ready to serve the fruit, toss it again to distribute the juices and sprinkle the salad with the slivered almonds. The salad keeps in the refrigerator for up to a day.

If you love candy and you love bacon, you'll love this bacon candy, which I adapted from a recipe from the theKitchn via the food blog Tide and Thyme. The addition of thyme cuts the sweetness of the bacon and imparts a bit of adult polish. 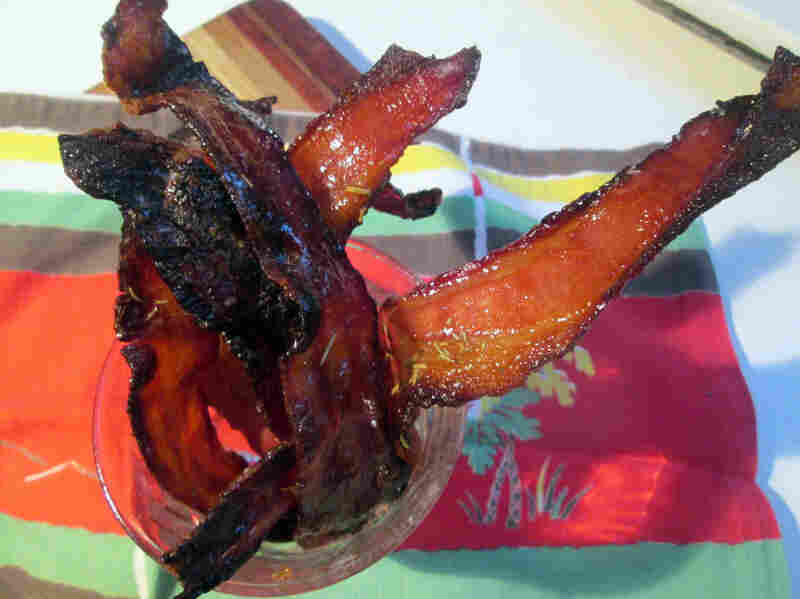 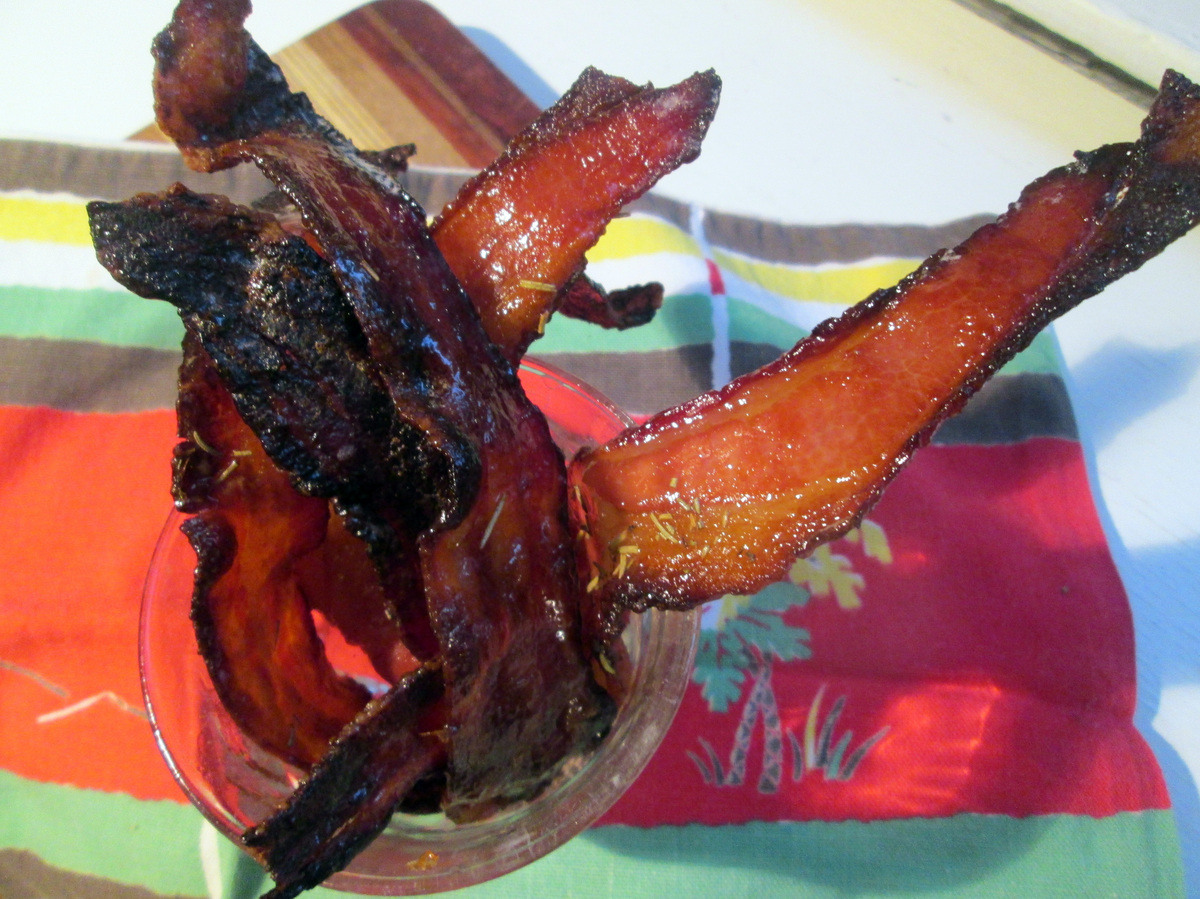 Preheat oven to 425 degrees F. Combine the brown sugar, beer, mustard and cayenne in a small bowl, whisking well to form a thin syrup. Set aside.

Line a rimmed baking sheet with aluminum foil. Place a wire cooling rack on top of the baking sheet. Place the pieces of bacon on top of the rack, with enough space between them so they don't overlap. Brush one side of each bacon strip with the beer syrup. Place the sheet in the oven and cook for 8 to10 minutes.

Remove the bacon to a wire rack to cool for at least 1 hour before serving.

In this recipe, which is adapted from a drink called "The Captain Reid's Milkshake" in Warren Bobrow's Apothecary Cocktails: Restorative Drinks from Yesterday and Today, mint liqueur and chocolate ice cream combine into a rich milkshake. This shake is thinner than the typical milkshake; if you prefer thicker shakes, reduce the amount of milk and adjust the mint liqueur to your taste. 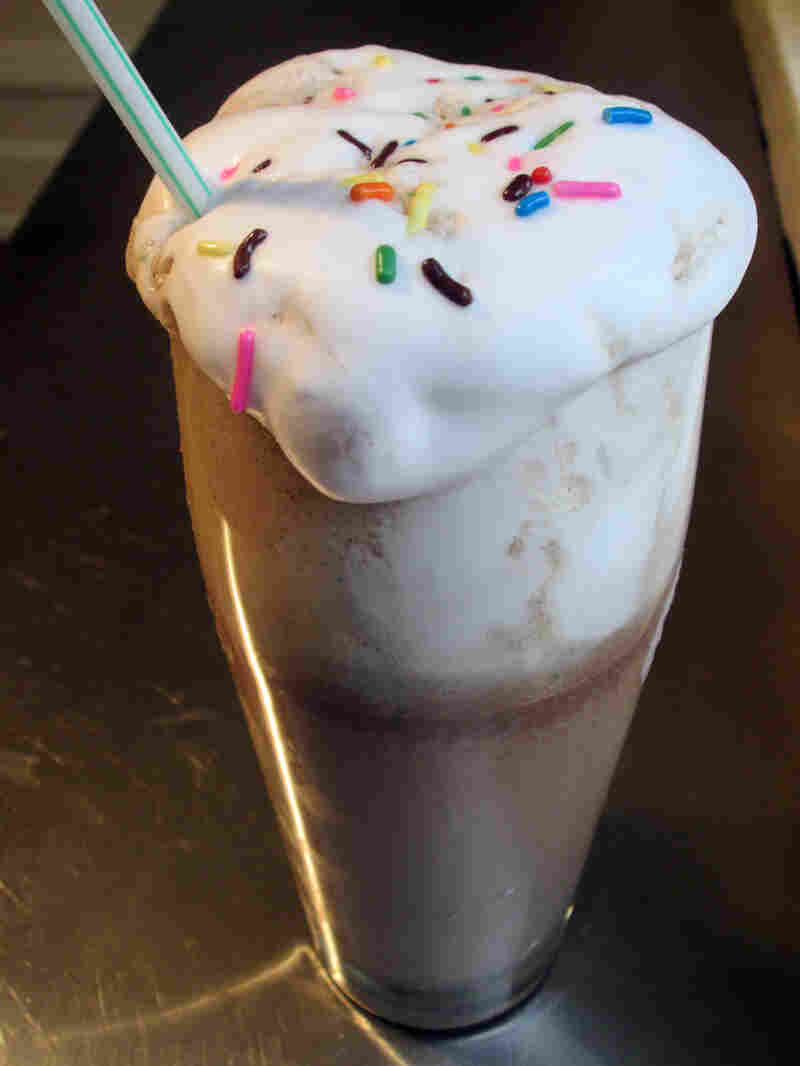 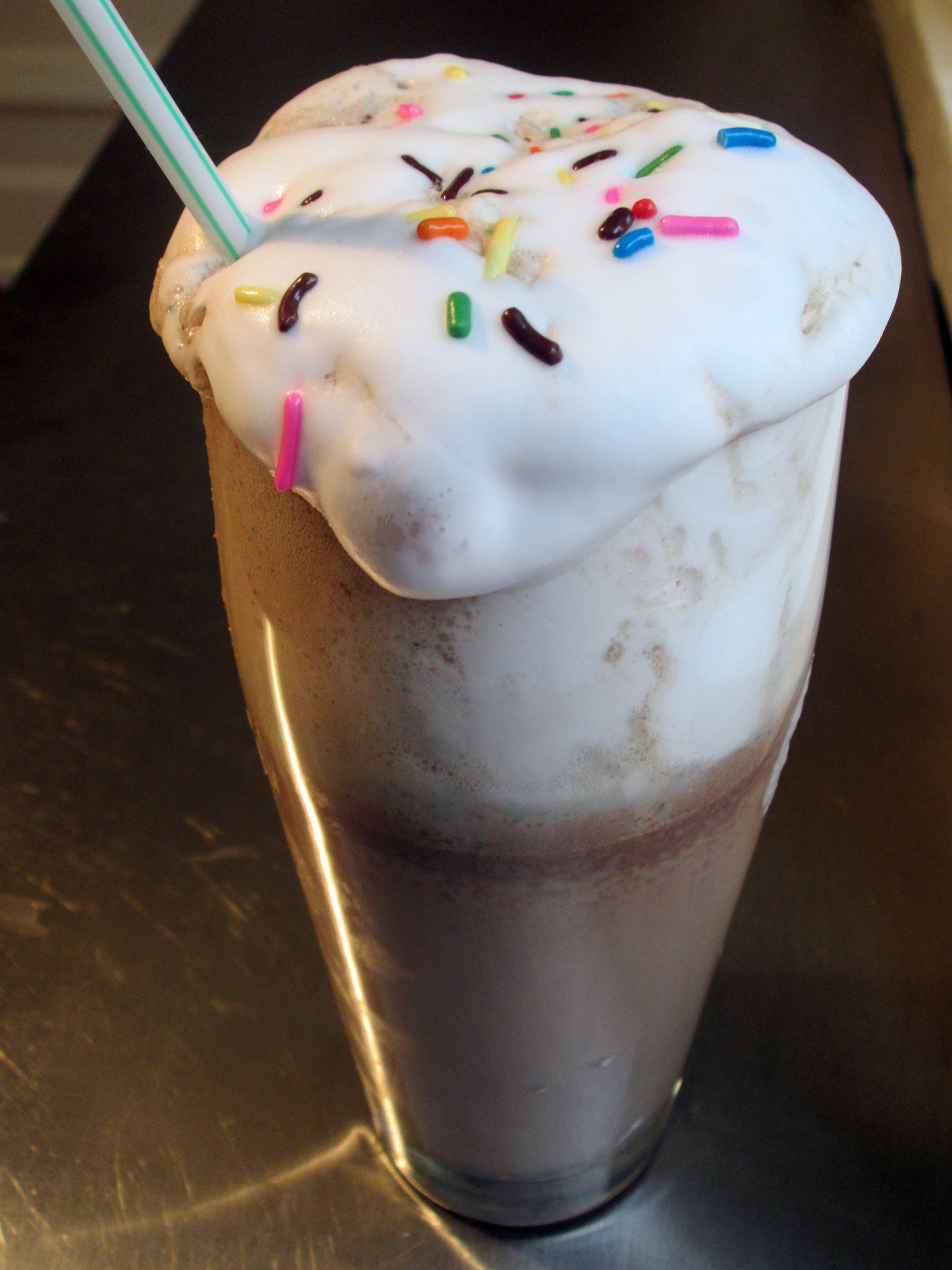 In a blender, blend all of the ingredients except the sprinkles and salt until smooth. Pour into glasses and top each serving with sprinkles and fleur du sel.