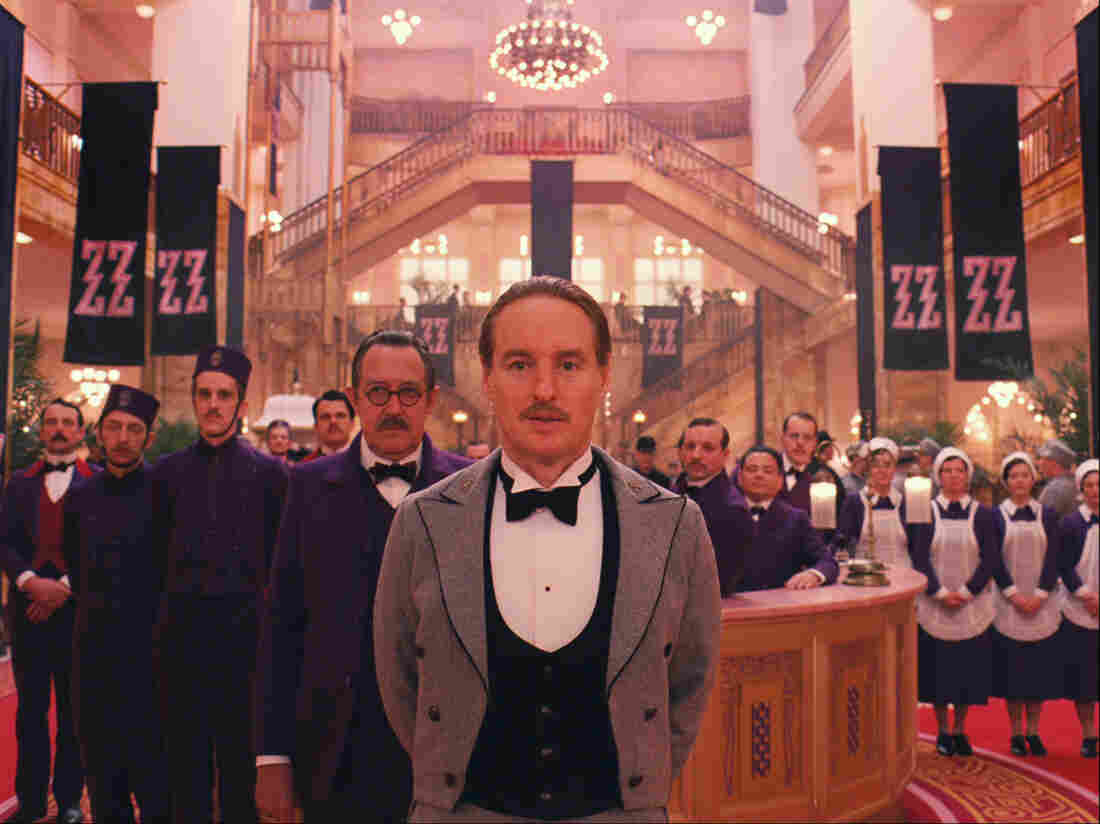 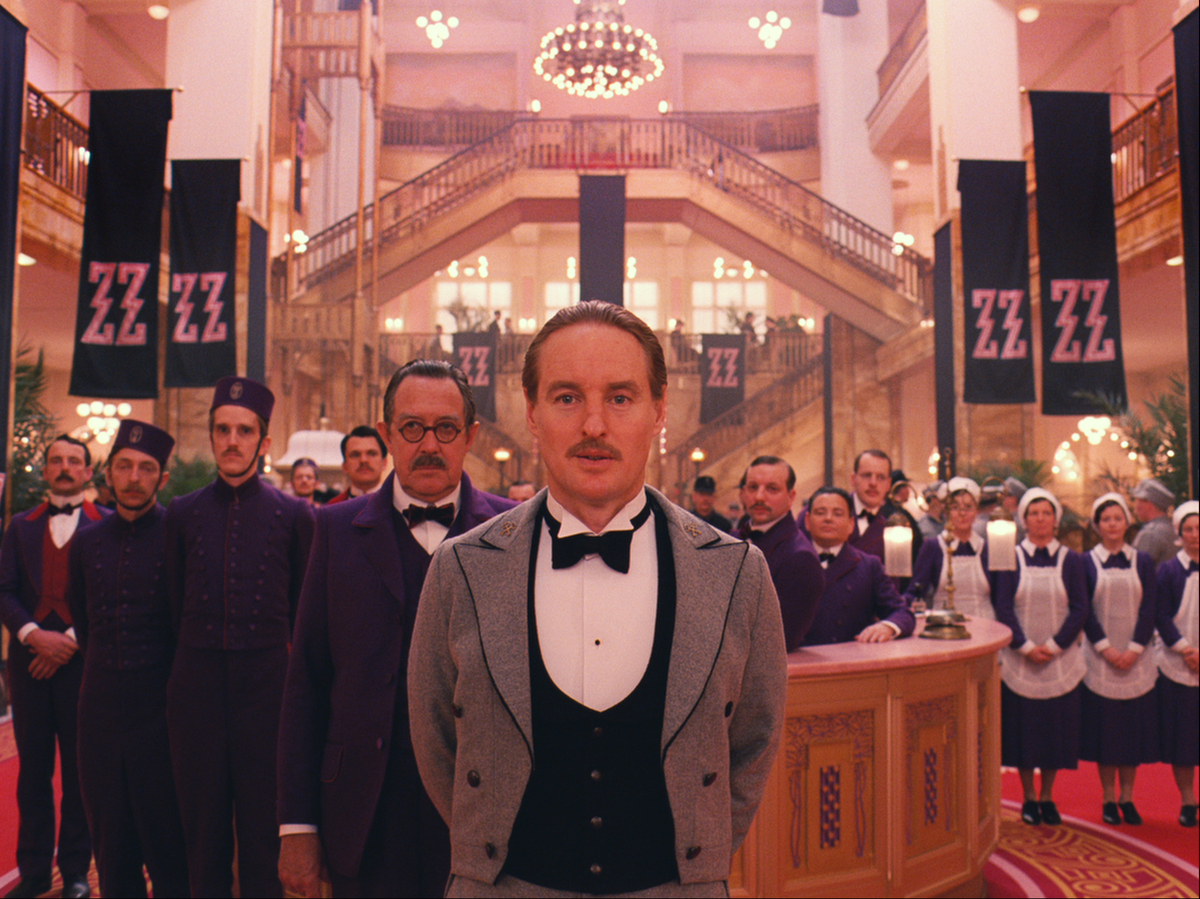 Wes Anderson's new film The Grand Budapest Hotel begins with an author looking back on his work, explaining how he came to write a book about a hotel. The film has a story within a story within a story — but most of it is set in the late 1930s in the fictional central European country of Zubrowka on the eve of war.

Ralph Fiennes stars as the concierge of the elegant resort. He makes sure everything is just so, but as the movie progresses and the plot thickens, his confectionary world is violated by fascism, by police who think he committed a murder and by a greedy family looking to cut him out of a will. Along the way, Anderson pays tribute to war films, prison break movies and screwball comedies.

More On The Film:

A Psychological Game Of Casting For 'The Grand Budapest Hotel'

Anderson's other films include The Royal Tenenbaums, Fantastic Mr. Fox and Moonrise Kingdom. He speaks with Fresh Air's Terry Gross about telling his first historical fiction story and how the film's set came together.

On The Grand Budapest Hotel being historical fiction

I haven't ever made a movie before that had such a specific historical context, and at the same time I've made this choice to vaguely fictionalize it all, and it's an odd combination. It's very clear what moments we're referring to and what region this is taking place in, but we've made our own country and our own Europe and we've sort of combined the two world wars. Who knows why in the world I felt it had to be done that way. I usually feel the need to invent a world for the characters to live in in the movies I do ...

Part of why I feel the impulse to reimagine [World War II] rather than just do it is because it's been done so many times before. This is such familiar historical territory. The reason I want to engage with it is because this series of events in Europe are somehow still right in the middle of our lives. 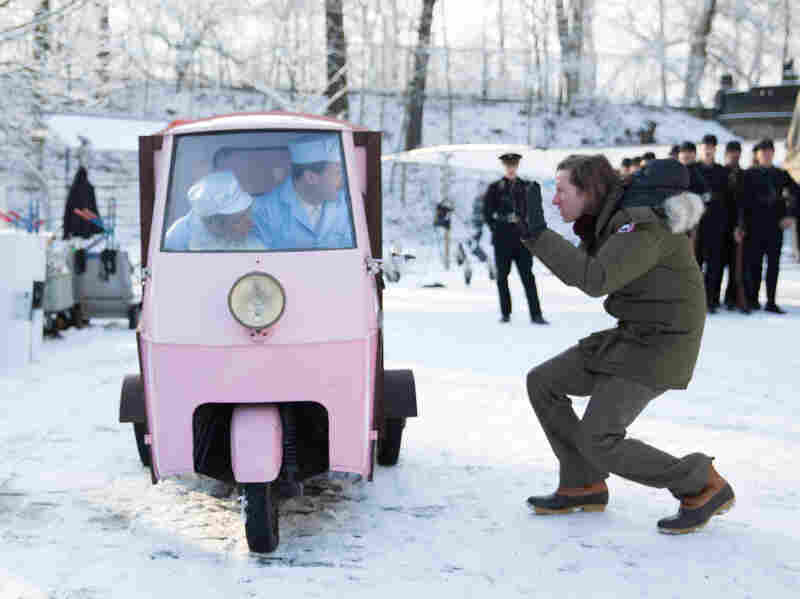 Anderson (right) says his shoots are carefully planned and organized – until the actors come in, "and then it's just chaos." Martin Scali/Courtesy of Fox Searchlight Pictures hide caption 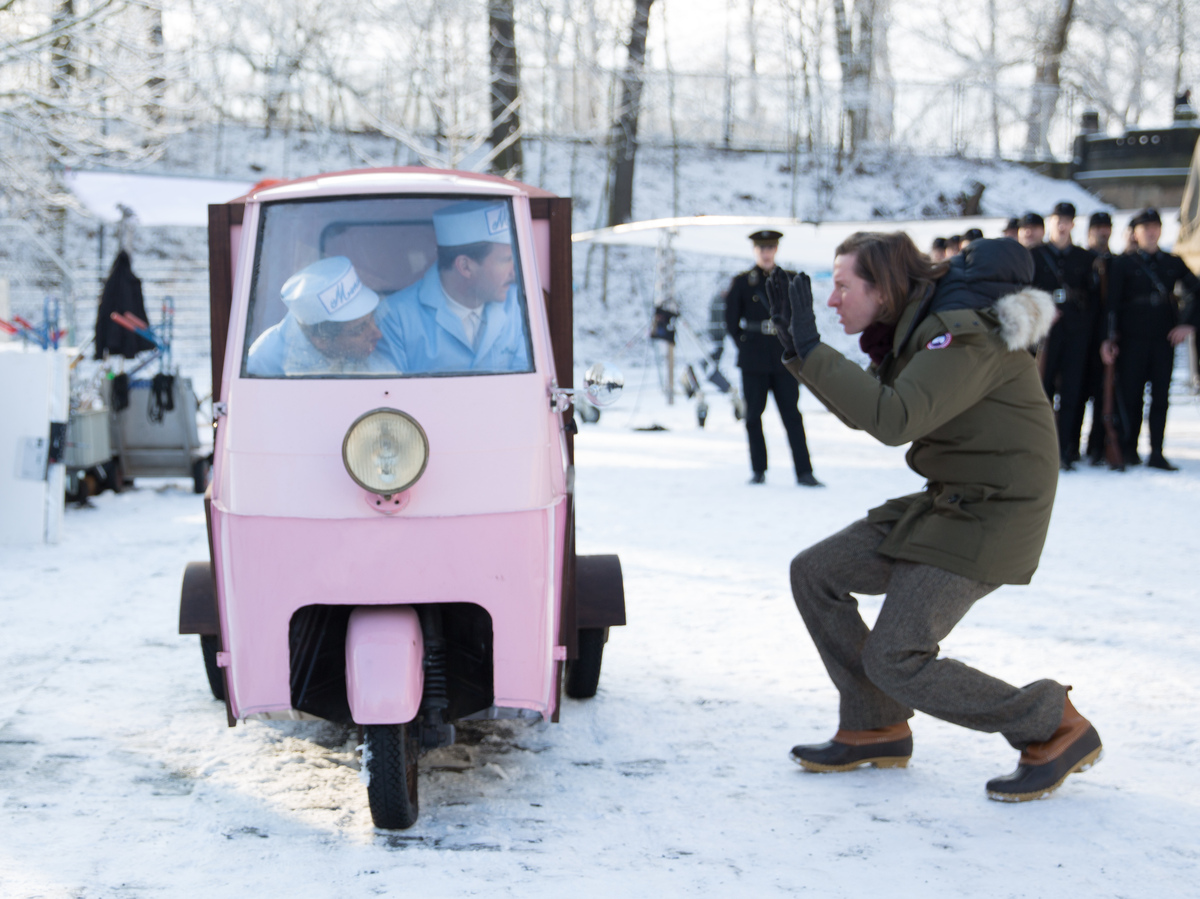 Anderson (right) says his shoots are carefully planned and organized – until the actors come in, "and then it's just chaos."

The editing ... and the construction of the sets and the design of the sets, even if it's on location — this is all carefully planned. ... We gather all of the ingredients and we have it very prepared so that when the day comes to shoot, everything is sort of quite set in that way.

But the actors — I feel like what happens is we all get together, they come on the set and then it's just chaos, and they take over and it goes one way or another. We tend to do a lot of takes but very, very quickly, one right after another, and anything might happen on the next take. That's my feeling of what it's like on the sets of the movies I do. I think there's choreography, but I always feel like it's coming from them. Maybe that's an illusion.

On shooting on location

I felt like I [didn't] want to work in a movie studio. I've done it before; I don't like it. I like to be on location; I like to have input from the real world that is helping to shape what we're doing ...

We found this department store in this town called Gorlitz, which is in Saxony. Half of it is in Germany and the other half is in Poland. It's on the border and it's about 20 minutes from [the] Czech Republic, so in a way it's really right where our story would be if there was such a place. ... This department store that we found, we made into our hotel — the big entrance hall of our hotel — and then we found everything else from the movie within a certain radius of that department store, and we discovered all sorts of things and people as we traveled around, figuring it all out. We made a pastiche of the greatest hits of Eastern Europe.

On deciding to use a miniature for the hotel

I thought we were going to find the perfect hotel and that we'd just do it there. We didn't. We looked for a very long time and we found all kinds of great parts of hotels and ideas, but we didn't find the right one. In fact, the more we looked, the more we wanted to use things from multiple places. So eventually, we ... decided we're going to do a miniature. We set to work on designing it.

First, I love miniatures. It's just an old movie technique, an old-fashioned approach. ... There's a certain charm to miniatures to me, I just like them. But also, when you're doing a miniature it means you can make the thing exactly the way you want. You have essentially no limitation. So we could put our hotel where we wanted it, we could make it look how we wanted it, and we could put things around it that we wanted...

On having characters side by side, looking straight at the camera

I have my own way of blocking things and framing things that's built into me. I compare it to handwriting. I don't fully understand it — why my handwriting is like this — but in a way there's some sort of tonal thing with the kind of stories I do. They tend to have some fable element, and I think my visual predilections are somehow related to trying to make that tone and make my own writing work with performers.