Accessibility links
Movie Review - 'Shirin in Love' - A Two-Sided Love Triangle With A Side Of Clichés Set in Los Angeles' large Iranian-American community, Shirin In Love tracks an all-too-predictable love triangle among Shirin, her Iranian plastic-surgeon fiance, and the white son of a famous author.

In LA's Iranian Set, A Two-Sided Love Triangle With A Side Of Clichés

In LA's Iranian Set, A Two-Sided Love Triangle With A Side Of Clichés 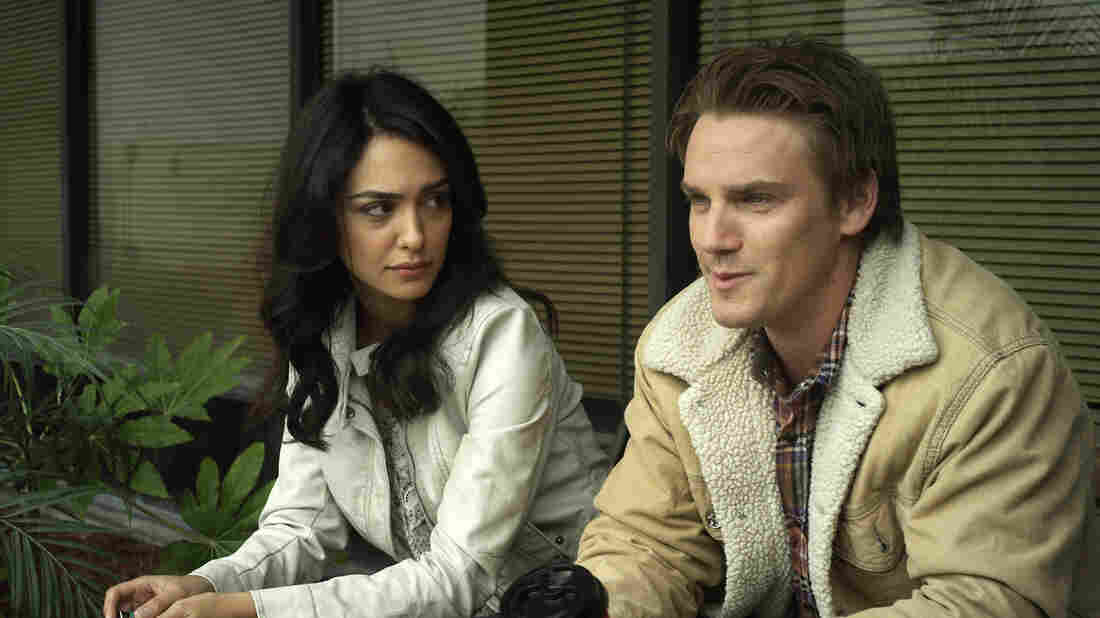 Nazanin Boniadi (left) occasionally lights up the screen as the lovestruck Shirin, but in the end her performance is hemmed in by the flatness of the film she anchors. Katrina Wan PR hide caption

There's a lot that needs forgiving if you want to enjoy the few simple pleasures offered by Shirin In Love, but the most egregious fault is perhaps too structural to overlook: The love triangle set up for the title character (Nazanin Boniadi) by writer-director Ramin Niami angles too obviously in one direction. The end result is too much of a foregone conclusion even for a predictable romantic comedy.

Shirin works as a book critic for her mother's lifestyle magazine, BH Style, and drives a beat-up Volkswagen Beetle. So it takes only a brief glance at her fiancé, Mike (Maz Jobrani) — who we meet lounging by the pool at his L.A. mansion, wondering why Shirin hasn't brought him his beer yet — to realize he's not the right match. He has wealth, no doubt, and, in Shirin's Iranian-American community, the right family connections. But no one would bet on him against William (Riley Smith), who has the air of an intellectual and a befuddled, Matthew Perry-like charm. And he's the son of a famous author to boot.

Shirin in Love's conventional and often choppy beginning does admit a few signs of promise. There's an intriguing feminist undercurrent that we glimpse in Shirin, who's introduced as a clumsy amateur journalist, but who we later learn is a Columbia law school grad who gave up human-rights law to pursue her writing dreams.

A tendency to let labels stand in for actual character development is one of Shirin in Love's major faults -- Mike, for example, is defined largely by the stereotypes associated with plastic surgeons — but in the case of Shirin, the revelation is backed up by some actual shifts in her personality.

When we first meet her, she's a bumbling mess, misplacing her license and registration before charming her way out of a traffic ticket. But when she arrives at the house of famed author Rachel Harson (Amy Madigan), the subject of her first feature for BH Style, we begin to see a hidden confidence in her. And when she meets (or re-meets, due to some unnecessarily convoluted plotting) William, who turns out to be Rachel's son, she takes pretty much all the initiative in their flirtation.

The scenes at Rachel's house also suggest the stifling effect of Shirin's Iranian cultural heritage. "Our families have known each other since they were kids," Shirin tells Rachel about Mike. "My mom really loves him."

That aspect of her character remains largely unexplored, though. For the most part, Niami is more interested in innocently poking fun at, not outright criticizing, the large Iranian-American community in the wealthy LA neighborhood known as Tehrangeles.

And that's fine, though less dull if Niami had managed to offer a well-rounded vision of the Iranian community. Instead, what we see is tediously generic. Shirin's meddling, overbearing mother is an overused cliché, not a cultural feature, and the same goes for her submissive father. The deepest knowledge we get of Iranian culture comes from the Farsi phrases characters use from time to time, which require two levels of translation: first the literal ("Dirt on my head!") followed, in brackets, by the figurative ("What a disaster!").

But then Shirin in Love rarely strays from easy stereotypes of any stripe. The movie features a wise, straight-talking black man and, very briefly, a vodka-guzzling Russian, both of which are by turns embarrassing and inexplicable. Even Will, who lives at a lighthouse and writes on a typewriter, has little to offer except superficial markers of an authentic solitary life.

Taken piece by piece, Shirin in Love lacks almost anything novel, and about halfway through the pace slows significantly as a result. Derivative scenes begin to add up (we get the friend telling Will not to let such a good woman go, the scene of Shirin's father telling Shirin to marry for love, not convenience). Ditto the saccharine dialogue.

Most unforgivable, however, is a twist at the end of the movie that needlessly undercuts one of the film's strongest characters. That leaves Shirin as the only character with any ability to hold our attention. But while Boniadi can sometimes be a magnetic presence on screen, it's never enough to make us forget the stale personalities that surround her.