Accessibility links
For Sandy Hook Killer's Father, Tragedy Outweighs Love For His Son Peter Lanza opened up to writer Andrew Solomon about Adam's life and how he tried to help him. Solomon says, "[Peter] would've liked to save the world and himself from the horror of what happened." 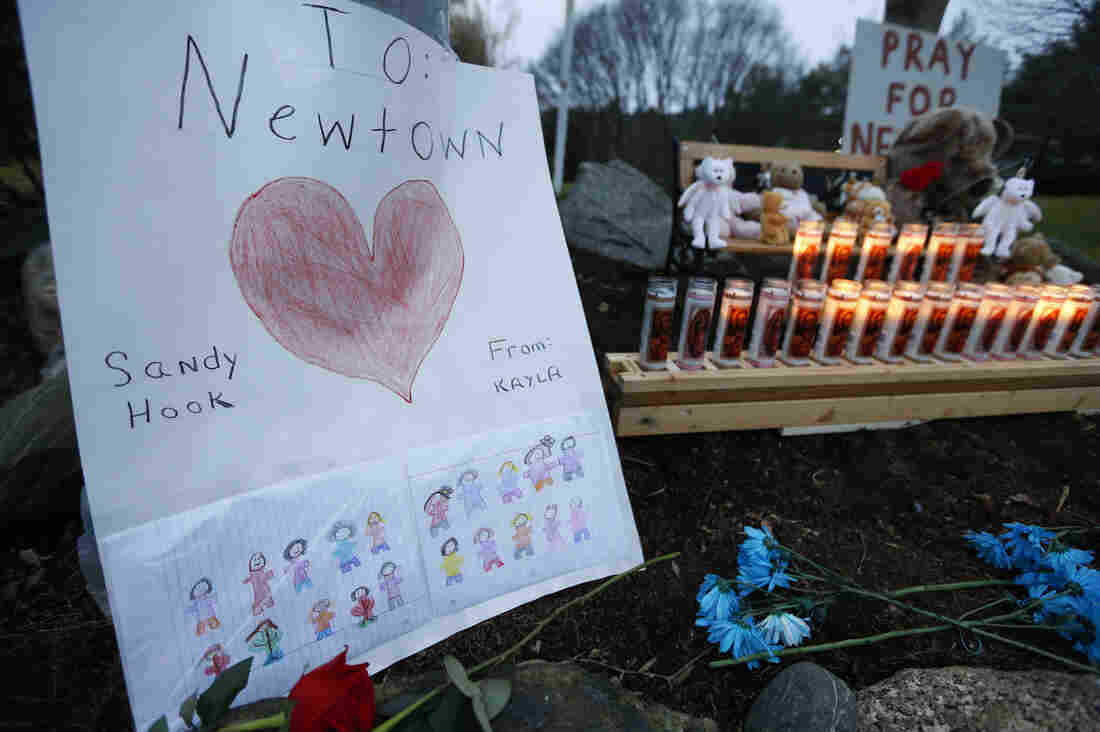 Adam Lanza killed 20 children and six teachers Sandy Hook Elementary School in Newton, Conn., in 2012. His father has spoken to the media for the first time since the incident. Jason DeCrow/AP hide caption 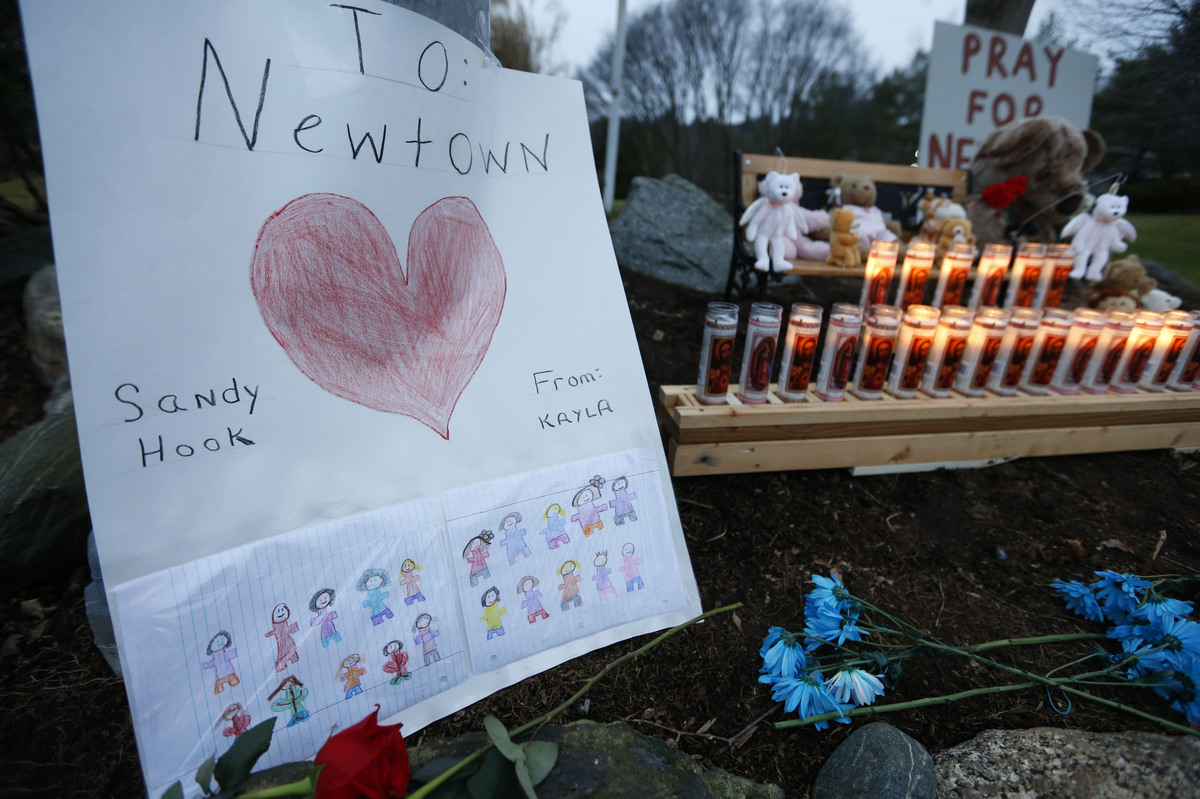 Adam Lanza killed 20 children and six teachers Sandy Hook Elementary School in Newton, Conn., in 2012. His father has spoken to the media for the first time since the incident.

We still don't know why Adam Lanza killed his mother, then 20 children and six teachers at Sandy Hook Elementary School before turning a gun on himself in December 2012. But we do know more about Lanza's life, what his doctors had to say about him and what his parents did to try to help him.

His father, Peter Lanza, broke his media silence by granting a series of interviews to writer Andrew Solomon. They met six times for interviews that lasted up to seven hours. The resulting article, "The Reckoning: The Father of the Sandy Hook Killer Searches for Answers," was published in the current edition of The New Yorker.

Solomon's latest book, the best-seller Far From the Tree, is about the parents of children who are profoundly different — children with psychological, cognitive or physical disorders; children conceived in rape; and children who become criminals or murderers. That book was published one month before Adam Lanza's rampage.

Solomon tells Fresh Air's Terry Gross about how Adam's autism diagnosis may have masked other problems.

On early signs that Adam was severely troubled

As a small child he had a sensory integration disorder, meaning that he found various sensory stimuli overwhelming and impossible to deal with. He showed a physical insensitivity to pain: His mother warned the school that he might not stop doing something because it hurt, the way other children would, and that they should keep an eye on that. He had some obsessive tendencies, I think ...

As time went on, he began to seem more and more problematic. He developed a stiff gait and an awkward walk. He became somewhat socially withdrawn. He seemed profoundly disconnected from other people ...

I think he found stimuli altogether difficult to deal with. I mean, the point at which he ceased to be able to deal with school was when he had to change classes. Instead of sitting in a homeroom all day in middle school, he had to move from classroom to classroom, and he found the noise of the hallway and the raucousness of the other adolescents and the chaos of having to figure out where it was he was going — he found all of those things so overwhelming that he was nearly defeated by them.

The moment when I knew there was an article here that I wanted to write was when I met Peter for the first time and he effectively said the autism masked whatever else was going on. Later, he said to me, "Autism makes people weird, but it doesn't make people like this. There was something else horribly wrong with Adam that wasn't the autism. But once we had an autism diagnosis, we assumed that that explained everything that was strange about Adam and we stopped looking beyond it."

On Adam's exposure to and interest in guns

We need to separate the interest in mass murder ... and the interest in guns. He had grown up in a household in which guns were a normal part of everyday life, as they are in a large number of American households.

His mother had grown up in New Hampshire. She was, as one friend of hers put it, "a 'live free or die' New Hampshire girl." For her, having guns around was a normal part of everyday life. And Adam was very interested in guns and, as has been widely reported, he and Nancy spent time together at the shooting range so that he could hone his skills with guns. He was on a lot of notice boards online in which he had endless, very technical conversations about the workings of [all types of guns]. That was an obsession he had which was visible and which he shared.

In reading the emails between Nancy and Peter during that long period when Adam was not speaking to Peter, it's very, very striking that Adam, over and over and over again, was breaking down in tears, was unable to function, was so depressed that he was sitting in his room staring into space for five hours at a time. Nancy's emails throughout that whole period of time are absolutely heartbreaking. They describe someone who is in a state of such internal misery as defies almost all description ...

I think [Peter] felt like they were about to lose control of a situation that was already not a very happy situation. Again, they didn't think the loss of control would involve the murder of elementary school children, but they thought that Adam was already clearly suffering a great deal and that he was then ... going to withdraw from the last people he had any contact with. And they were worried not about his destruction, but about his agony.

I believe Peter Lanza still loves Adam Lanza, and loved him all along. I think in some great scale of justice he's weighed that love against what happened and feels that what happened vastly outweighs his feelings of love.

On Peter saying that he wishes Adam had never been born

What made that statement particularly poignant and powerful is that I believe Peter Lanza still loves Adam Lanza, and loved him all along. I think in some great scale of justice he's weighed that love against what happened and feels that what happened vastly outweighs his feelings of love.

When he said he wishes Adam was never born, it's not because he has no emotional relationship to him; it's only because he would've liked to save the world and himself from the horror of what happened.

On the tendency to blame Adam's parents

There's no question that there are instances in which parents who are extremely abusive or neglectful help their children to develop toward criminal behavior. But there are also many, many people who have got something in them that compels them to commit crime, that is not affected in any way by the parenting that they receive.

I think that Peter and Nancy tried incredibly hard to be good parents. ... I think it's reassuring to most of us to think the problem was that they were bad parents, because as soon as you think that, you think: And I am not a bad parent and therefore this can't happen to me. And the conclusion that I came to after spending all of this time with [Peter] is that it could happen to any of us. And I look at my own children, who seem to me like the sweetest people in the entire world, and I know somewhere in the back of my mind now, in a way I never knew before, that this could happen to me, too, and that they could go off in some terrible direction and I might be helpless to prevent it.