Accessibility links
A Terrible Winter Wreaks Havoc On Roads, Pipes And City Budgets The nation's infrastructure has taken a beating this season. Fixing what the heavy snows and bitter cold have wrecked is long overdue — and the cost will be hefty. 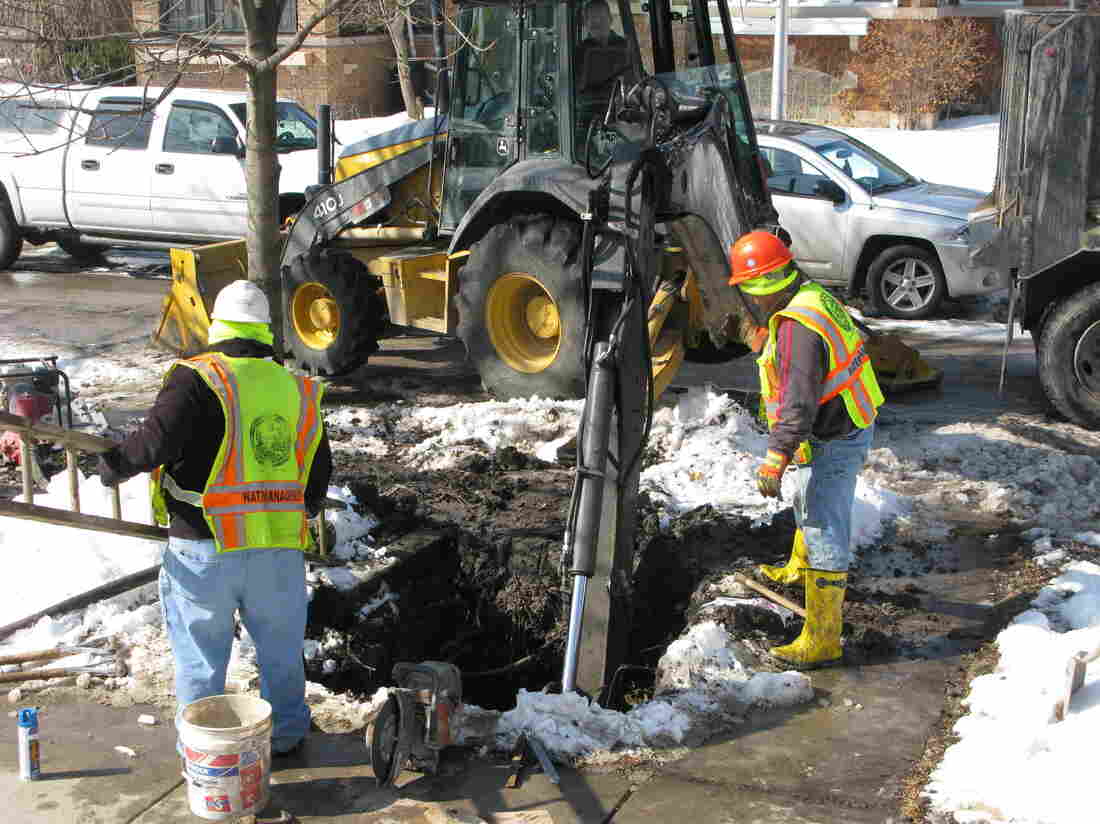 A backhoe operated by a Chicago Department of Water Management worker digs a trench about 5 feet deep so other workers can repair a leak in a waterline deep underground. David Schaper/NPR hide caption 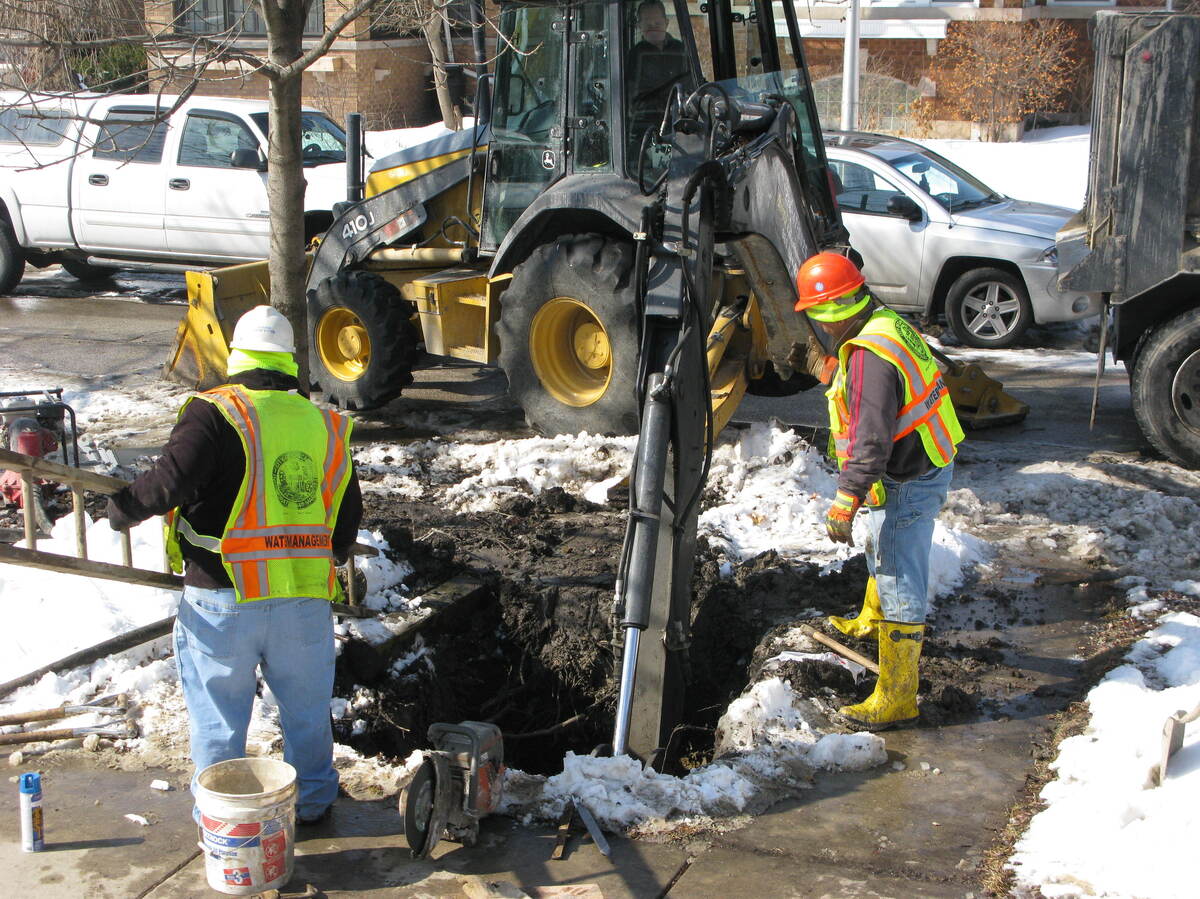 A backhoe operated by a Chicago Department of Water Management worker digs a trench about 5 feet deep so other workers can repair a leak in a waterline deep underground.

Bitter cold has returned to parts of the Midwest, mid-Atlantic and Northeast, following another heavy snowstorm that left 1 to 2 feet of snow from Ohio to New England.

And when all this snow finally melts, it'll expose the physical toll of this brutal winter: potholes, broken water mains, collapsed catch basins and other infrastructure problems.

"This winter's crazy, crazy busy," says John Polishak, a foreman for the Chicago Department of Water Management. "Everybody's been working 16 hours a day, seven days a week. It's exhausting."

Polishak is supervising a small crew digging up a snow-covered, frozen parkway in front of a house on Chicago's northwest side. They create a trench more than 5 feet deep to find where a water pipe is leaking.

This is a common problem this winter. Most water pipes in Chicago are buried 5 feet deep, which is usually below the frost line, but record-cold temperatures caused the ground to freeze much deeper than normal.

Here we are in March, and we've had almost three full months of some of the worst weather I've seen in my years with the city of Chicago.

As the ground freezes, it expands, causing the frozen soil to shift and push against the aging water pipes. That movement can cause the pipes to bend and crack. The same thing has been happening in natural gas pipes, causing a huge increase in gas leaks under city streets this winter.

After removing the rusting piece of water pipe and joint called a "buffalo box," Polishak shows the damage.

"You see how this was supposed to be straight?" he asks, pointing to a slight bend in the pipe. "It literally pulled this thing up, and it broke the joint."

Tom Powers, a Chicago Department of Water Management commissioner, says the biggest problem is that the cold weather "has not let up."

This week's snowstorm, which dumped another several inches on the city, has made this winter the third-snowiest on record. It is also one of the coldest winters ever recorded.

That's led to more frozen water services than any other winter in recent memory, Powers says. "In 2013, we had roughly at this time, round numbers, about a thousand calls. This year it's over 5,200."

As weather starts to warm, another problem develops. The pipes are old — really old — and they can break as the temperature fluctuates back and forth. "We've got 4,400 miles of water main across the city of Chicago; about a quarter of that is 100 years or older," he says. 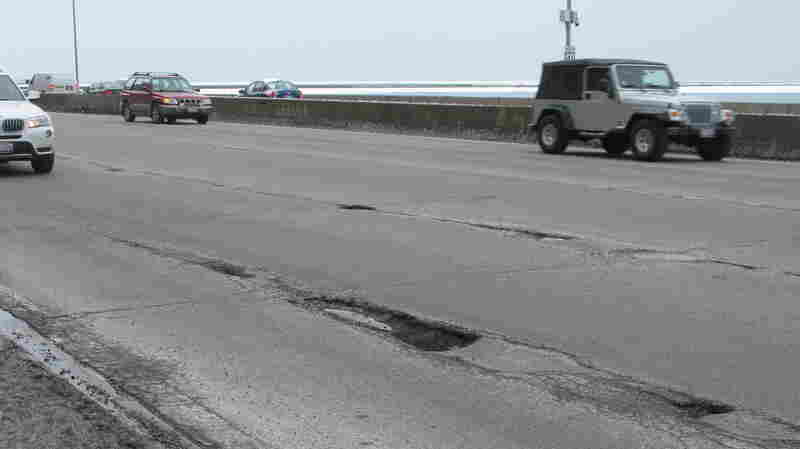 Potholes on Chicago's Lake Shore Drive, one of which is about half-a-car-length long and at least a foot deep. The city of Chicago says it has filled an estimated 240,000 potholes this winter, 100,000 more than last winter, at a cost of more than $2.8 million. David Schaper/NPR hide caption 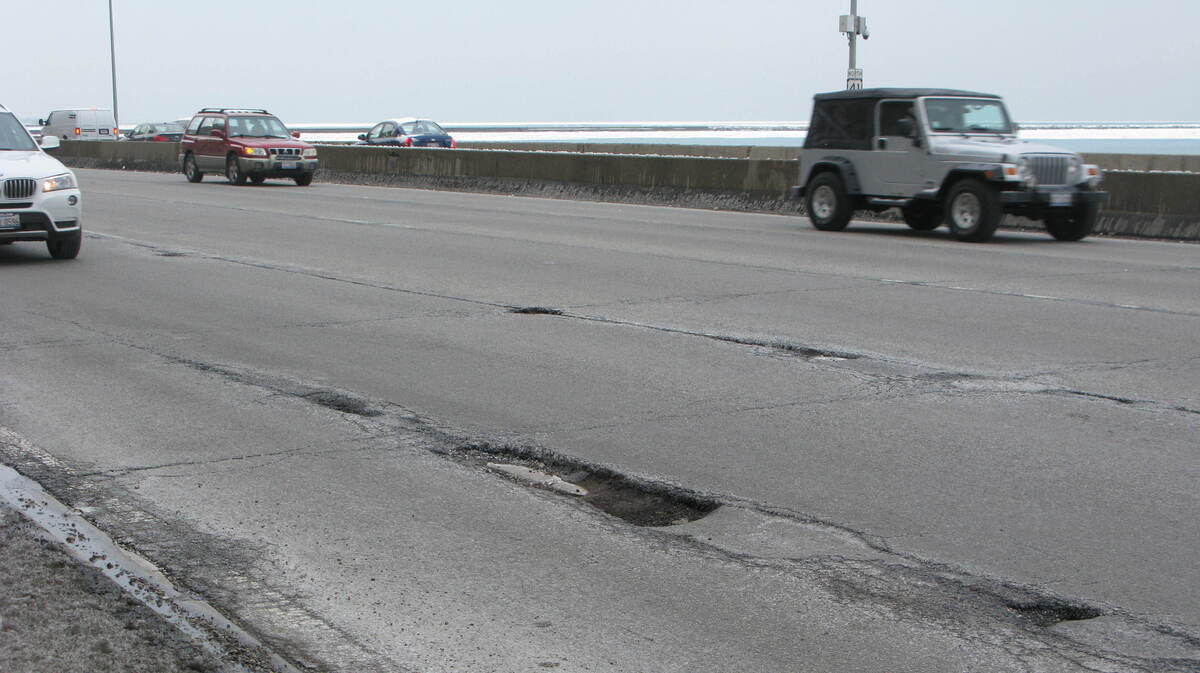 Potholes on Chicago's Lake Shore Drive, one of which is about half-a-car-length long and at least a foot deep. The city of Chicago says it has filled an estimated 240,000 potholes this winter, 100,000 more than last winter, at a cost of more than $2.8 million.

It's not just water pipes. Aging catch basins and sewer lines are crumbling, too — some of which are so old they're made of brick.

And, of course, potholes are opening up on roads and bridges everywhere.

This isn't happening just in Chicago. The northern half of the country, and even some parts of the South that were hammered by the rare polar vortex, are feeling it too.

"The infrastructure has taken a beating as a result of this winter, and it was already in a somewhat fragile state before the cold and snow hit," says James Brooks of the National League of Cities. "The general deficit in infrastructure investment existed long before" this winter's harsh weather.

He says the cost of fixing up what the heavy snows and bitter cold have wrecked will be hefty, at a time when many cities' budgets are just as fragile as their infrastructure.

The American Society of Civil Engineers agrees that energy, water and transportation infrastructures are in poor shape. Before this brutal winter, the group graded the condition of the nation's infrastructure as a D+. The effects of repeated freeze-thaw cycles, heavy plowing and corrosive road salt exacerbated infrastructure problems, says Andrew Herrmann, a former society president.

"The salt, the chlorides, they just accelerate deterioration," says Herrmann. "They cause the steel [on a girder on a bridge] to rust at a faster rate, they cause it to expand and pop out the concrete if it's in rebar. ... It can cause everything to deteriorate faster."

But, Herrmann says, the chilly clouds that brought all this misery this winter may have a silver lining of sorts: "Though I don't wish a pothole on anyone, I hope it does open [the public's] eyes that, yes, we need to do something about our infrastructure."

Herrmann and others say this is a critical time to make greater investments in infrastructure, because climate change will likely bring more extreme weather and more violent storms.

"We have to make sure that we design our infrastructure ... [to be] more resilient," says Herrmann. "That means, unfortunately, more investment, more dollars put into it."