Accessibility links
Step Right Up: 20 Very Silly Inventions Actually Pitched On 'Shark Tank' Shark Tank is a very popular Friday-night show where inventors present their "great ideas" and try to get loud rich people to invest. We look at some of the silliest products in the show's history. 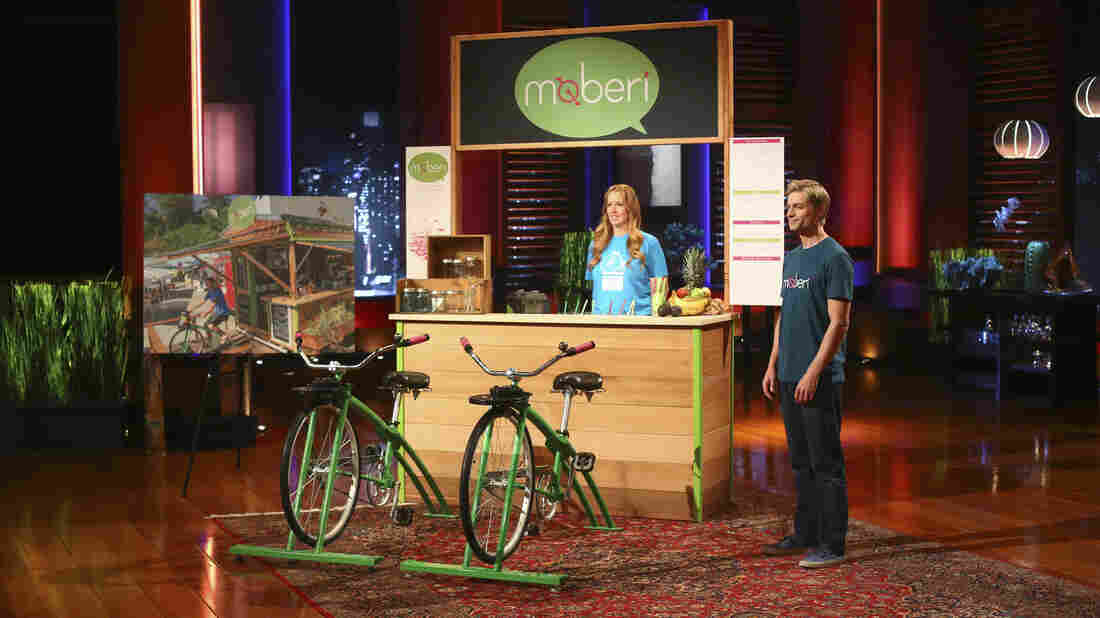 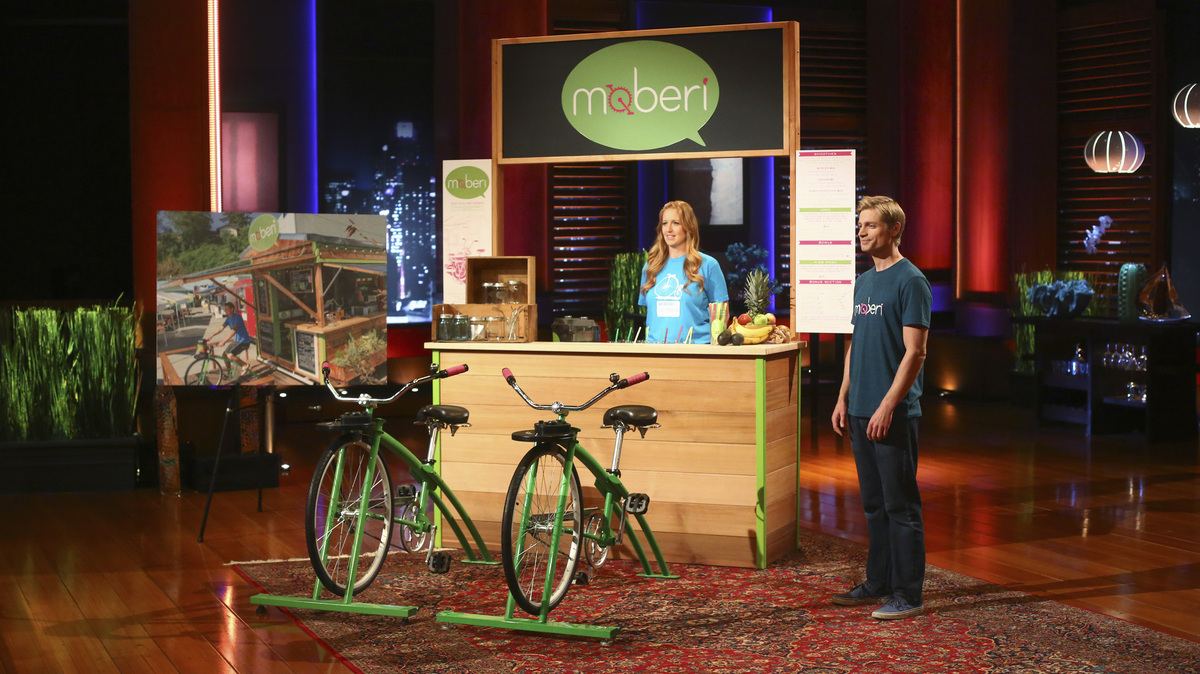 The Moberi bike-powered smoothie stand is demonstrated for the investors of Shark Tank.

Shark Tank is a startlingly popular Friday-night show where people who have invented various strange things (and sometimes cool things) bring them to a group of rich people and beg for an investment. Some of the products make sense, some are sort of genius, and some are ... well, some are like these.

1. "Squeeky Knees." If you've always wanted your toddler to make a squeaky-toy noise all around the house as you gradually descend into utter madness, Squeeky Knees are the baby pants for you. They're essentially doggie squeak toys built into clothing so that you can save money on haircuts by pulling it all out yourself.

2. "Moberi." This is an idea for a smoothie stand where the smoothies are made in bicycle-powered blenders. You can either power the bike yourself, or an employee can power it for you. The smoothies cost about $6. So if you want a smoothie, but you want it to take longer and cost more, this is the place for you.

3. "Invisiplug." Surge protectors are unsightly, so this line of surge protectors designed with a wood-grain look are supposed to blend into your hardwood floors. This is sound thinking, provided that you have hardwood floors , you don't look where the wood-colored cord goes up your wall, and you don't actually have any cords and plugs stuck in it, since it tends to be the tangle of cords, and not the surge protector itself, that is unsightly. (Note that the photos are tight shots of just the empty unit and the floor.)

4. "Pet Paint." Perhaps the only product that could really carry the slogan, "Do you hate your dog?", Pet Paint is a temporary spray that you douse your poor dog with so that it can be a decorative prop in some sad little pageant you're throwing in your mind.

5. "The 180 Cup." Your basic red Solo cup, with a shot glass "built in," in the sense that if you turn it upside-down, you can pour a shot into a well carved out of the bottom, although in doing so, you will eventually drip both the liquor and the beer all over yourself, at which point you really might as well just slug out of the bottle like a person, particularly since — let's face it — you are already drunk on the least expensive cheap booze you could find that wasn't made in a jelly jar.

6. "Elephant Chat." It's hard to explain this product, but here goes: It's a stuffed elephant that's crammed into a plexiglass case with a metal cover. When you have a beef with your spouse, you take off the cover so there's an "elephant in the room." (It's kind of like "in case of fire, break glass," but it's "in case of grievances, break elephant case.") Then you hand the elephant back and forth while you're discussing your relationship problems, the same way a summer camp or something might use a "talking stick" or a conch shell.

So if you think it would be fun to walk into your house, see a stuffed elephant jammed into a plastic box like you've entered a movie called Dumbo Die Die Die, and know that it also meant you were going to have to have a really unpleasant conversation soon, THIS IS THE STUFFED ELEPHANT FOR YOU! (Never mind the fact that you could use the same method by putting literally any object in any location and save yourself — get this — 60, that's six-zero, dollars.)

7. "Kookn Kap." There's something great about the fact that this is called "Kookn Kap," with the finger-quote spellings, even though it is, in fact, a cap, and it is, in fact, for cooking. That doesn't mean it's not dumb, though. The Kookn Kap is a puffy cap you put over your hair so that your hair doesn't retain food smells. In the demo video, they show a woman wearing it so that her hair doesn't smell like the food she's been preparing for her friends at a dinner party, which ignores the fact that the food still does. So even if we posit that food smells in your hair are a major social problem at dinner parties (?), your more serious problem is that food smells from food are a major social problem at dinner parties.

8. "LugLess." This is perhaps the least whimsical item on this list. It's what I would call, "Practical-Sounding: And Yet." LugLess is a service by which you ship your luggage when you travel rather than checking it. They have a whole system set up where they FedEx you luggage tags, you put them on your bags, they pick them up for you, and they deliver them to your destination. Try not to be thrown by the fact that a standard bag costs, according to their web site, $90 to ship.

9. "SquirrelBoss." Look, I'm not going to lie: plenty of people with bird feeders dislike squirrels. But this product actually requires you to pick up a remote control while a squirrel is on your feeder and shock it. Shock it right there, while you watch. Other than those looking to deliver a nice John McClane "Yippee-ki-yay," I'm not sure there's a huge audience for this, despite the disturbing animated GIF on their site that shows the same squirrel being shocked and shocked and shocked into eternity.

10. "HoodiePillow." I'm just going to put up this video, which, in its way, is my everything.

11. "Arkeg." A combination arcade console and keg, this was a product that not even its inventor seemed to take seriously, which sort of took the fun out of it. The target audience is, I assume, those who want to make beer drinking more complicated to both arrange and perform, as well as those who never saw a large object they didn't want to put beer in.

12. "PartiePoche." Another creative spelling, the PartiePoche is a cell phone pocket that a woman (in a dress) straps to her thigh while dancing like crazy at a club, so that if her phone rings, she can simply reach under her dress to answer it. What could be simpler?

13. "Wired Waffles." You've heard of energy drinks, right? Well, this is a caffeine-infused waffle that's sold in a plastic bag like a snack food at places like gas stations. They also sell caffeinated syrup. But I ask you this: If you're in that much need of a wake-up, can I recommend the Squirrel Boss?

14. "Cougar Energy." Another energy drink, this time for older ladies looking to get it on with younger men. For a look at Cougar Energy via perhaps the most awkward video I've ever seen, let's go to Tito Jackson.

15. "Kisstixx." Like a couple of the other products on this list, this one actually got a deal. The idea is that one person uses one lip balm, and the other person uses the other lip balm in the two-tube set, and the two mix together when the people kiss. So if you've always enjoyed kissing but wish it were more like licking two candles, try Kisstixx!

16. "Ledge Pillow." I'm not going to lie to you: This product, which is basically a wedge-shaped pillow designed to lift a lady's torso so she can sleep on her stomach even if she is generous of chest, is not the worst idea I've ever heard. However, the name — "Ledge Pillow" — sounds like something Steve Carell's character in The 40 Year Old Virgin would have made up, and it's so unsettling once that gets into your head that "ledge pillow ledge pillow ledge pillow" starts to sound dirty.

17. "Man Candle." "Man Candle," believe it or not, is NOT dirty. It's a line of candles that smell like golf courses, pot roast and farts. I assume that's what the guy put on his tax returns under occupation: "Flatulence-Scented Candle Sales."

19. "UroClub." If you're out on the golf course and you need a restroom, but there isn't one nearby, wouldn't it be great to be able to pee into your golf club in front of all your friends? Sure it would. My favorite part, actually, is where the lady assures you that when you reach under the towel that you will hang around your waist and stand there for a while, "it appears that you're just checking out your club."

20. "Throx." Throx is a company that sells socks in sets of three, for when you lose one. That's the entire company: three socks. In his pitch, the inventor said it "beats the competition by a foot." And that "Throx has legs." How many foot puns can one man make? That was the real question.