Accessibility links
Why You Won't Win Warren Buffett's Billion-Dollar Bracket The billionaire investor has teamed up to offer a $1 billion prize to anyone who picks the winner of all 63 games of the NCAA basketball tournament. Chances are he won't have to pay out. 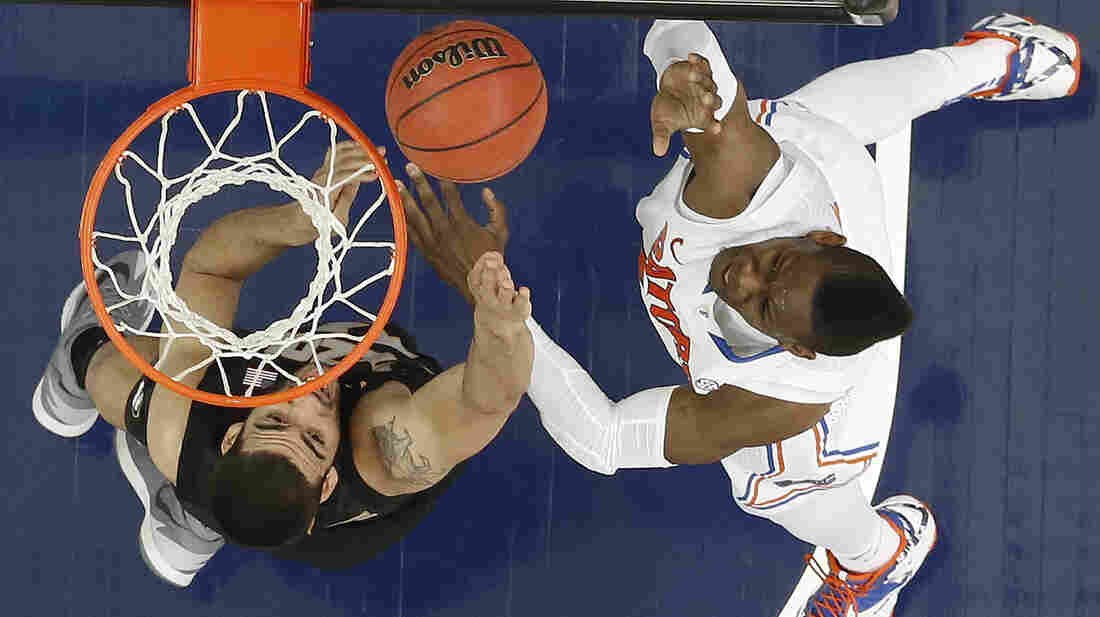 Florida's Will Yeguete shoots over Missouri's Keanau Post in the quarterfinal round of the Southeastern Conference men's tournament on Friday in Atlanta. Investor Warren Buffett is betting $1 billion that no one can pick all 63 winners of the NCAA college basketball tournament that begins next week. John Bazemore/AP hide caption 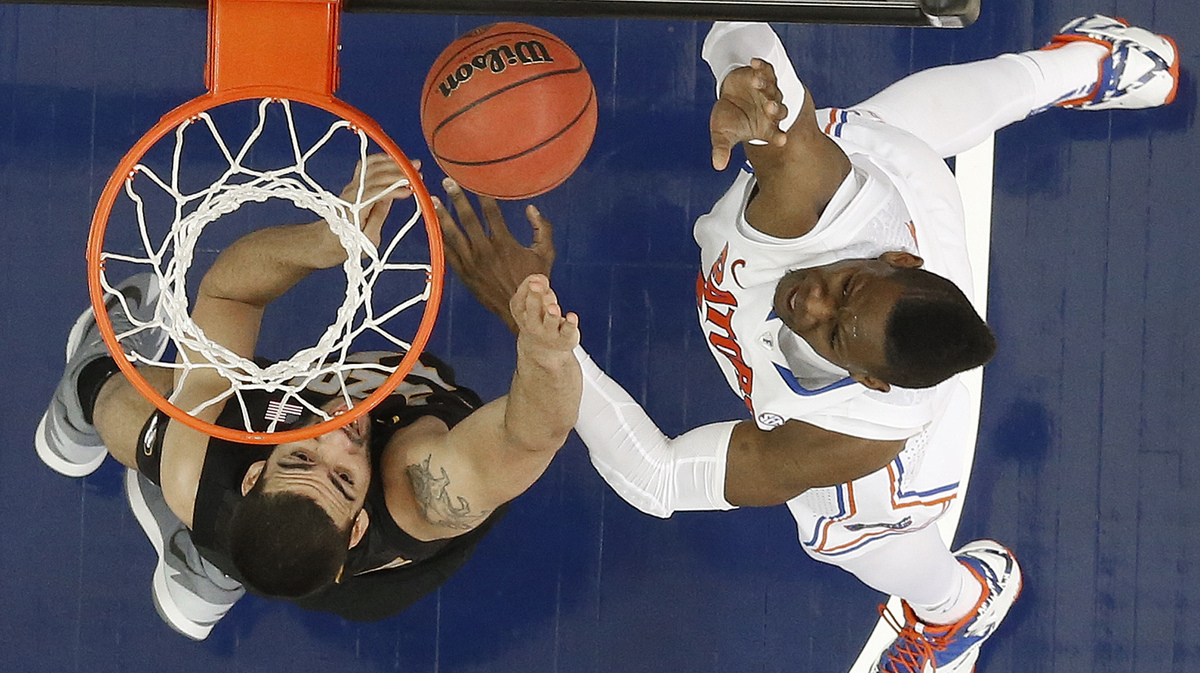 Florida's Will Yeguete shoots over Missouri's Keanau Post in the quarterfinal round of the Southeastern Conference men's tournament on Friday in Atlanta. Investor Warren Buffett is betting $1 billion that no one can pick all 63 winners of the NCAA college basketball tournament that begins next week.

In a twist on the familiar March Madness bracket, a mortgage company and a world-famous investor are offering a billion dollars to anyone who picks the winner of all 63 games in the NCAA college basketball tournament.

It's a contest, and it may also be the perfect publicity stunt.

Let's introduce the players. There's Quicken Loans, the mortgage company that's sponsoring the contest. And there's investor Warren Buffett — he's the insurance man here, willing to pay out the $1 billion if someone wins.

Then there's Yahoo — you need one of its accounts to enter. Finally, there's as many as 15 million people who are expected to sign up to play.

Maybe you've heard the odds of picking a perfect bracket? They're not good: one in 9.2 quintillion.

Nine quintillion. That's a nine, followed by 18 zeroes. That's not the kind of number we actually use on this planet. It's a number that a couple of 10-year-olds might invent during a sleepover.

Jeffrey Bergen, a math professor at DePaul University, says don't worry about quintillions. Those odds assume every game in the tournament is a toss-up, but in the early rounds, highly ranked teams usually win. So he's got his own number.

"One in 128 billion, if you know something about college basketball," he says.

Even those odds need some perspective.

"If you have a favorite baseball team, they are more likely to win the next seven consecutive World Series than you are — with knowledge of basketball — to get a perfect bracket," Bergen says.

He could go on. One in 128 billion won't keep Warren Buffett up at night, which is what makes this such an inspired contest.

"I think it's better than brilliant," says Vin Gupta, founder of InfoFree.com, a company that provides email lists and sales leads to small businesses. "It's unbelievable, and especially when you have Oracle of Omaha Warren Buffett talking about it."

Buffett and Quicken Loans are getting lots of media attention. More than that, Buffett gets a fee — he hasn't disclosed the size — for insuring the contest.

Through the sign-ups, Quicken gets a trove of information on as many as 15 million people, some of them potential mortgage customers.

"Any time you have self-reported data where they fill in their name and address and phone number, email, do they have a house or not, what's the mortgage like, are you looking for a new house, it's extremely valuable," Gupta says. "It's all opt-in at that time, and that's where the value is."

Quicken says it won't sell the data to third parties and will only contact people who indicate they want to talk about mortgages, but of course, once the tournament teams are selected, college basketball is what people will want to talk about.

Marketing consultant Peter Shankman keeps track of publicity stunts like this one. He says the billion-dollar bracket falls into a special category: an improbable occurrence connected to a widely followed event.

It reminds him of a Taco Bell contest in 2001 tied to the landing of the Russian Mir Space Station.

"They put out a one-mile-by-one-mile-wide target in the Indian Ocean, and they said if any part of the Mir Space Station hits this target, everyone in America gets a free taco," Shankman says. "Of course it was nowhere close to it. They had the insurance to cover it, but that got a ton of press."

The perfect bracket has already gotten a ton of press. You know what would get more?

Says Shankman: "It would be the ultimate PR stunt if someone actually won."