Accessibility links
Following His Father, A Palestinian Hopes For Peace Yousef Bashir was 15 when he was shot in the back during the Israeli occupation of Gaza. He is now a student in the U.S. and hopes one day he'll become a diplomat and return home. 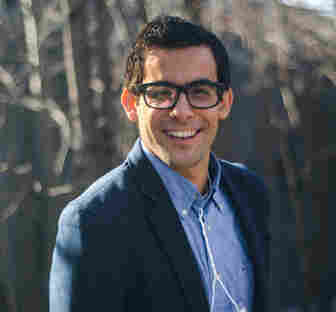 Yousef Bashir was 11 years old when Israeli soldiers took over his home in Gaza. When he was 15, he was shot by an Israeli soldier. Courtesy of Oneboydesign hide caption

Yousef Bashir was 11 years old when Israeli soldiers took over his home in Gaza. His family's house was right near an Israeli settlement, and the military transformed it into a sentry post.

But Bashir's father refused to leave, out of fear he would lose his land for good. The Israelis would stay in the Bashir home for five years.

Today, the situation between Gaza and Israel remains tense. More than a dozen rockets from Gaza were fired at Israel last week, to which Israel responded with airstrikes.

Palestinian leader Mahmoud Abbas meets with President Obama at the White House on Monday in an attempt to move forward with peace talks that have been stalemated for years.

Back in 2004, when Yousef Bashir was 15, United Nations officials visited his family to check on their situation. Bashir was with his father in the front yard, seeing the officials off, when he was shot in the back by an Israeli soldier.

"I remember exactly a beautiful afternoon — blue sky, clear air — and as soon as I waved goodbye, I hear something and I felt that I was no longer able to move or even talk," Bashir tells NPR's Rachel Martin.

Bashir says it felt like it took hours to get his father's attention and for him to realize his son had just been shot. Bashir's father put him in a U.N. car and rushed to the hospital. With his father comforting him, Bashir says, he remembers apologizing for his math and English grades, saying that he would "take it seriously" if he came back.

"I literally thought I was dying because everything within me and around me started to change and felt like the world was slowing down on me," he says.

So with time, I started realizing that the soldiers were not going to be there for a matter of weeks, or months. It just became more and more frustrating. I don't think I understood the meaning of the soldiers being in my house until I actually grew up.

Bashir was taken to a hospital in Tel Aviv, Israel. He said it was a shock to suddenly be taken care of by people who only weeks earlier he knew as the people with guns who he had to ask for permission to watch TV or to go to the bathroom.

"But now they are surrounding me, playing with my hair [and] asking me how I am doing," he says. They ultimately saved Bashir's life.

"It was a life-changing experience that taught me how to understand my father's passion for coexistence," he says.

Israel eventually left Gaza, and Bashir's home, in 2005. In an interview with NPR at the time, Bashir's father said that this was "not a time to gloat," and that he wished "to build a new, cooperative [and] healthy" relationship with the Israelis.

In the hospital, Bashir says, his father told him that he would turn his pain into something positive and not let the bullet define how he lived his life or his future, and that is what he is trying to do today.

Bashir says it took him some time to believe in his father's values, and it had to happen the hard way. "In the end I feel very privileged that I am his son," he says.

Yousef Bashir is currently studying for his a master's degree in Conflict and Coexistence at Brandeis University. He hopes that one day he'll become a diplomat and return home.

Who has the real leverage for change in the relationship between Israel and Palestine? The people or their political leaders? Tell us what you think on the Weekend Edition Facebook page, or in the comments section below.