Accessibility links
Efforts To Close The Achievement Gap In Kids Start At Home By age 3, kids in low-income households have heard 30 million fewer words than their more affluent peers, research shows. In Providence, R.I., a home visit program is focused on boosting vocabulary. 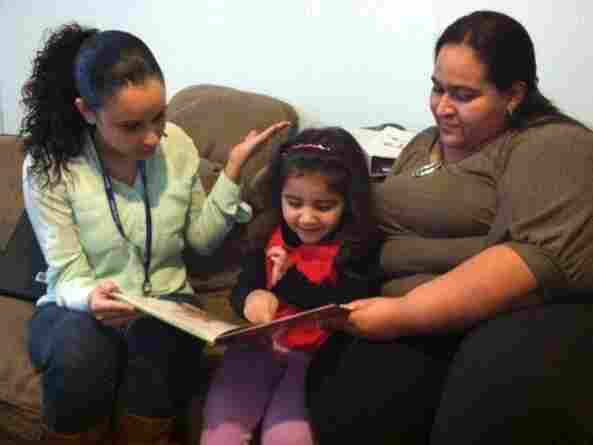 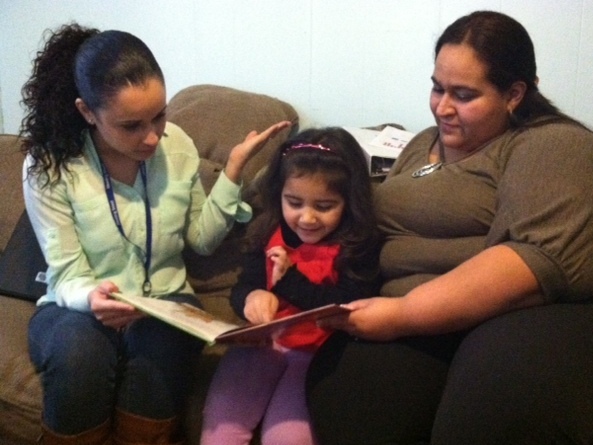 When Andrea Riquetti taught kindergarten in Providence, R.I., the disparity between more affluent students and those from poor families was painfully clear.

"We would read The Very Hungry Caterpillar," she says, "and I would ask them, 'What is this fruit?' And they would call all the fruits just 'fruits,' because they didn't have the specific name."

Two-thirds of Providence children entering kindergarten already fall short on state literacy tests. Riquetti says this disadvantage in her students would compound over time because so much of learning depends on basic vocabulary.

"It was very hard for them to comprehend stories or to write stories, to share or to ask questions," she says.

Riquetti now helps run Providence Talks, the city's ambitious effort to change this so-called word gap that researchers discovered two decades ago. They found that professional parents tend to chat away to their children, using sophisticated language even before kids are old enough to understand, while low-income parents tend to speak far less and use more directives: "Do this, don't do that."

Providence Talks draws inspiration from the work of Dana Suskind, a pediatric surgeon at the University of Chicago. She helps children who are born deaf hear with cochlear implants. But as she followed up on her patients' progress, she was confused and frustrated that some were not able to build their vocabulary like others.

Through her research, Suskind discovered that babies and toddlers in low-income families heard far fewer words than their more affluent peers, and that that early disadvantage affected IQ and school achievement. In 2010, she founded the Thirty Million Words Initiative, which uses recorders developed by the LENA Foundation to help low-income parents in Chicago track and improve how they speak to their children.

Suskind and others are working to expand public understanding of the word gap. California just launched a media campaign urging parents to talk, read and sing to their babies.

On average, by the time they are 3 years old, children in professional families have heard about 30 million more words than children from lower-income households. Through a yearlong series of home visits, Providence Talks aims to coach low-income parents to speak more, and differently, to their children.

On a recent morning, Julia Alfaro welcomes Stephanie Taveras, a home visitor from the program, into her small living room with a kiss on the cheek. Alfaro's 3-year-old daughter, Ayleen, bounds in, showing off her new sneakers with red lights.

Alfaro, 27, is a stay-at-home mom from Guatemala; her husband puts in long hours packing shellfish. Like much of Providence's lower-income population, the family speaks Spanish, though officials point out that is not the cause of the word gap.

Taveras brings a book to each visit. She settles on the couch next to Ayleen and her mother, and starts reading in Spanish. Then she points to the pictures and asks Ayleen questions.

"What color is that?" Ayleen taps a finger to her chin and ponders. "Yellow!"

To help parents measure progress, the city collects hard data. In fact, it's happening as they look at the book. Little Ayleen is wearing a recorder hidden inside a bright red vest specially designed for it.

The recorder logs every word spoken, all day long, and can distinguish different voices. It also distinguishes a TV, computer or radio that may be blaring in the background — words from those don't count when it comes to building a child's vocabulary, and in fact too much screen time may hurt, researchers say.

During the next visit, Taveras will bring a report that graphs the word count, hour by hour. Parents keep a log to know what they were doing at the time.

A sample report from Providence Talks shows how much a parent talks a day. LENA Research Foundation hide caption 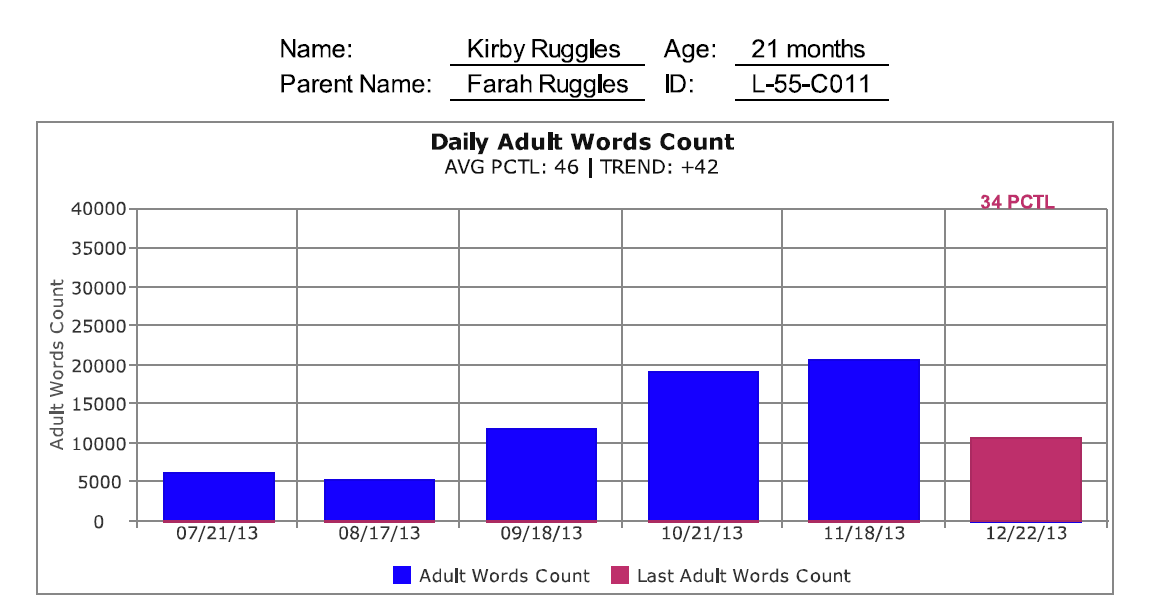 A sample report from Providence Talks shows how much a parent talks a day.

Another graph tracks conversational turns, when parent and child speak back and forth. Riquetti says these are incredibly important for language development.

"Even with babies," she says, "we see that [a parent] will coo or babble, and they will babble back, and we can measure that."

Alfaro says having all this data has changed how she talks with her daughter.

"Sometimes I was just talk, talk, talking," she says, "and not letting her express herself. Now I give her a turn."

Alfaro also turns off the TV. "Before, I'd put her in front of the TV when I was busy with housework," she says. "Now I'll include her. She'll help me wash the dishes, and we'll talk about what we're doing."

The first phase of the program includes 75 families, all of whom were enrolled in Early Head Start. Providence hopes to expand its effort to 2,000 low-income families and counsel them from the time their child is born. But the program is voluntary, and Alfaro says a lot of her friends are suspicious, fearful that someone is listening to the recordings.

City officials stress there's no transcript. A computer counts words only, then erases the recording.

Still, there are other concerns. Kyle Gorman, who studies language acquisition at Oregon Health and Science University, says the families who volunteer might already be more engaged with their children, "as opposed to parents of children who are most at risk."

He also worries about single parents and those juggling multiple jobs who are strapped for time. "And just as there's a word gap, there may be a parental involvement gap as well," he says. "What we're intervening to solve may not be so easily solved."

Providence Mayor Angel Taveras — no relation to the Providence Talks home visitor — pushed hard for the program, and says he's confident it will have an impact. He points out that he himself was raised by a single mother, an immigrant from the Dominican Republic who did not go to high school and did not speak English.

"I'm a Head Start baby," he says. "Several of my classmates at Harvard were Head Start babies. I think the best investment we can make is in the early years of a child's life. The returns are great. They're long-term returns."

It's not clear how long term this experiment will be. Providence won $5 million in startup funding from Bloomberg Philanthropies, and that money runs out in 2016. By then, Taveras hopes the results are so promising that other foundations will step up to keep it going.