Accessibility links
How The Cost Of College Went From Affordable To Sky-High In the decades following World War II, many American families had a lot of help paying for a college education. But in the 1970s, inflation spiked and public policies began to change. 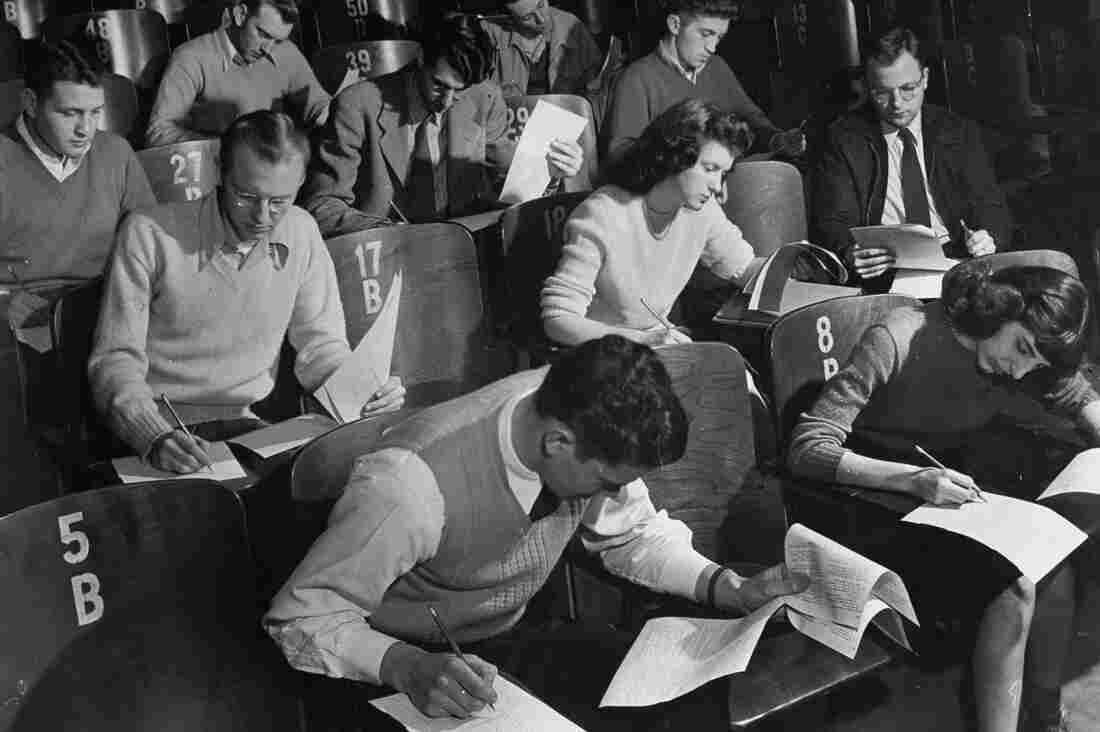 World War II veterans and other students at the University of Iowa in 1947. That year, due to federal assistance from the GI Bill, 60 percent of the school's enrollment was made up of veterans. Margaret Bourke-White/Time Life Pictures/Getty Images hide caption 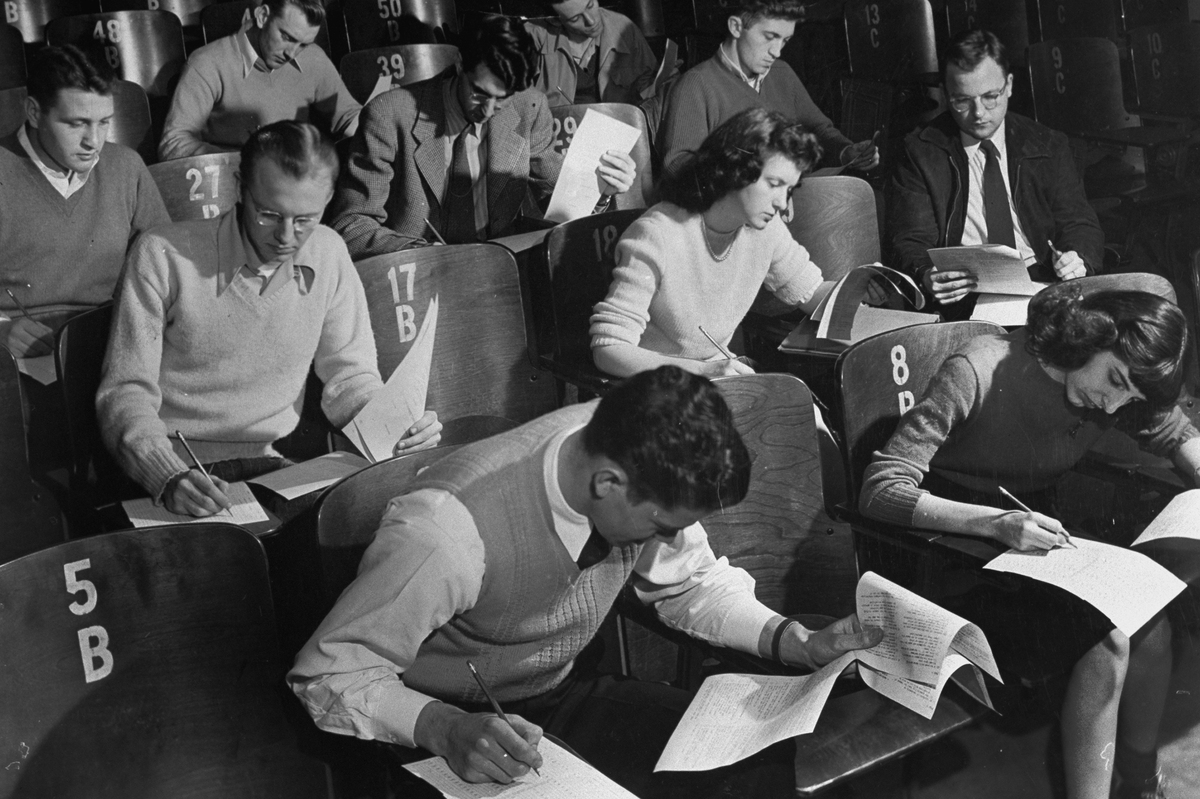 World War II veterans and other students at the University of Iowa in 1947. That year, due to federal assistance from the GI Bill, 60 percent of the school's enrollment was made up of veterans.

If you want to get an earful about paying for college, listen to parents from states where tuition and fees have skyrocketed in the last five years. In Arizona, for example, parents have seen a 77 percent increase in costs. In Georgia, it's 75 percent, and in Washington state, 70 percent.

Even in Oklahoma, where tuition increases have been among the lowest in the nation, parents are dismayed. In Stillwater, Okla., Jeffery Corbett's daughter is attending community college. Corbett, a fundraiser for a nonprofit, says a high school diploma just won't get you very far. And he knows; he doesn't have a college degree.

"I think about it all the time, because I realize [how] it has limited me, by not having that piece of paper," he says.

Paying For College: No Easy Answers For Many Families

And that, experts say, is the source of parents' frustration today. A college education seems unaffordable at the worst possible time — when "people are really struggling," says Sandy Baum, a senior fellow at the Urban Institute who has spent much of her career studying trends in college costs.

"The unemployment rate is high. Nobody's wages have gone up in recent years," she adds. "Increases in college tuition at public colleges, particularly in recent years, have really been unacceptable. And there's no question that that is a much higher percentage of median [family] incomes than it used to be."

And yet, Baum says, somehow, families are paying for it. "And the reason people are paying for it is because the return to the investment is so high." No matter what a higher education costs them, most Americans think it will be worth it, she says.

It was a different story 70 years ago, when most Americans thought college was only for the wealthy elite. That changed after World War II with the Servicemen's Readjustment Act of 1944, better known as the GI Bill of Rights.

A newsreel from the Army-Navy Screen Magazine about the Servicemen's Readjustment Act of 1944, designed to help World War II veterans pay for college.

The law made college affordable for a group of veterans who never would have thought of going beyond high school, says John Thelin, a professor at the University of Kentucky and author of A History of American Higher Education.

The GI Bill was an unexpected success, Thelin says, enrolling just under 8 million veterans — 10 times the number the authors of the bill had predicted.

This sudden, enormous demand, Thelin adds, could have pushed college costs higher — but didn't, because states embraced the idea. The booming postwar economy allowed them to spend unprecedented sums of money to expand higher education.

"The biggest problem that was facing governors and legislators was, could we build campuses fast enough?" Thelin says.

While states were investing, the federal government was carving out a new role for itself: helping families pay for college. It spawned the National Defense Student Loan program, later called the Federal Perkins Loan program, which did for civilians what the GI Bill had done for veterans — and opened college gates even wider.

Then, with the civil rights movement as the backdrop, the landmark Higher Education Act of 1965 pushed for greater college access for women and minorities.

At the same time, Thelin says, from "1965 to 1972, colleges and universities dug very deep into their own pockets to provide grants and other forms of student financial aid in partnership with the new federal programs."

Americans flocked to campuses with the expectation that the government was going to foot part of the bill, and college did become affordable for many more Americans.

But a turning point arrived around 1970, Thelin says. With double-digit inflation, an oil embargo and a sputtering economy, a perfect storm began to build. College tuition and fees climbed as much or more than the inflation rate. Private loans, heavily subsidized by the federal government, gradually replaced federal grants as the main source of money for both poor and middle-class college students.

As family income fell, borrowing to pay for college took off, while public investment in higher education dropped. Sandy Baum of the Urban Institute says that drop has been the single biggest reason for the increase in college costs.

"So it's not that colleges are spending more money to educate students," Baum says. "It's that they have to get that money from someplace to replace their lost state funding — and that's from tuition and fees from students and families."

While most institutions tried to keep costs down, Baum says, some took advantage of the public perception that a high tuition means a quality education.

"There's certainly evidence that people don't know how to measure the quality of a college education," she says. "They think that if it's expensive it must be better. I don't think colleges want to have high prices, but I do think they see strategic reasons why it may be in their interest to have high prices."

For the average family though, the pricing of a college education has become a shell game. As colleges love to point out, there's the sticker price and there's the real price. That's great for the few who can navigate the labyrinth of financial aid sources and discounts that institutions say they offer.

Experts say parents are slowly but surely becoming smarter consumers of higher education and are helping their kids find less-expensive options — like community college — while coming to the realization that a college education never will be the entitlement that many Americans thought it was 30 or 40 years ago.

That brings us back to those bewildered, if not wary, parents who see no end to the rise in college costs. Parents like Heather Gillette, a mother of two in suburban Seattle. Her daughter attends Washington State University, where she's studying to be a veterinarian.

There was never any question that her kids would go to college, Gillette says. The only question is what they would study. Even so, she says, "it does come down to the parent making the decision about what they can afford."