Accessibility links
Movie Review - 'Jodorowsky's Dune' - The Greatest Film That Never Was Director Frank Pavich tells the story of cult director Alejandro Jodorowsky's attempt to adapt Frank Herbert's novel Dune into what might have been the trippiest movie of the '70s.

'Jodorowsky's Dune': The Greatest Film That Never Was

'Jodorowsky's Dune': The Greatest Film That Never Was 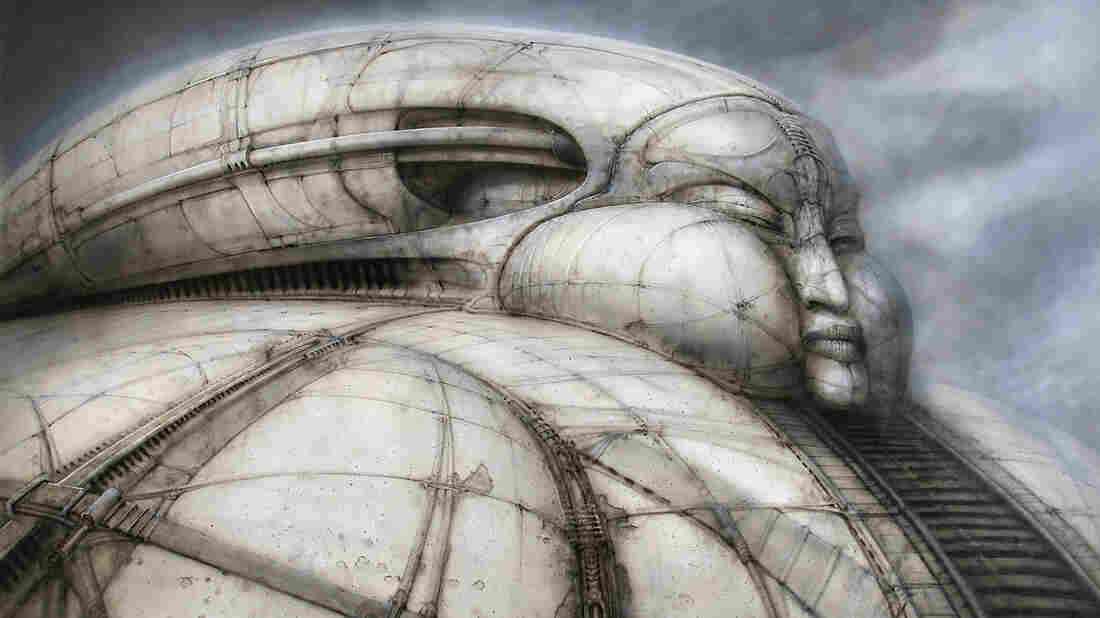 A design sketch, by H.R. Giger, for the Harkonnen Castle as he envisioned it for Alejandro Jodorowski's Dune. Sony Pictures Classics hide caption

"Dune will be the coming of God."

Hyperbole, thy name is Alejandro Jodorowsky. Early on in Frank Pavich's documentary about Jodorowsky's failed attempt to bring Frank Herbert's science-fiction epic to the screen back in the 1970s, he not only compares his vision to that of the arrival of a deity, but also claims that it would have given sober viewers the exact feeling of being on LSD.

The Chilean-born director speaks of recruiting not technicians and artists, but fellow spiritual warriors. At one point, he describes a shot from the planned film that he intended would outdo Orson Welles' legendary opening tracking shot in Touch of Evil -- only in service of showing the entirety of the cosmos.

Basically, dream big or just don't dream at all.

Pavich's documentary tempers that kind of imaginative chaos by telling a fairly straightforward story of how, in 1975, one of the biggest figures in cult cinema got his hands on one of the biggest novels in science fiction and set out to make a movie with the modest ambition of changing how we see movies forever. That straightforward presentation makes the documentary highly accessible — but also sometimes feels at odds with the manic, hallucinatory energy of its subject.

The film begins by neatly summarizing Jodorowsky's career through the '60s and early '70s, with particular focus on 1970's El Topo (cited as patient zero in the '70s midnight movie trend) and 1973's mind-bending The Holy Mountain. The latter caught the attention of French producer Michel Seydoux, who essentially offered Jodorowsky carte blanche for his next project, and the director chose to adapt a book, Dune, that was widely regarded as unfilmable.

Once the two of them get together, Pavich progresses methodically through Jodorowsky's pre-production process, including the recruitment of those "spiritual warriors": special-effects technician Dan O'Bannon, designers Jean Giraud (known by the pseudonym Mœbius) and H.R. Giger, Pink Floyd, and actors including Orson Welles, Mick Jagger, and in one of the movie's most hilarious stories, Salvador Dali. The latter is recruited mainly by tricking him into thinking he'll be receiving the highest salary ever paid an actor. Essentially, Jodorowsky was going after outsized creative personas just as mad as he was.

The parts of the movie focusing on the design are some of the strongest, as Pavich gets full access to the staggering number of sketches and storyboards that were assembled — which Seydoux and Jodorowsky bound in massive coffee-table tomes to distribute to studios in the (eventually dashed) hopes they'd back the actual production. Pavich animates many of these, giving us the closest thing to an actual look at what Jodorowsky's version of Dune might have looked like.

This is not a documentary about a failed movie in the same way that Lost in La Mancha told the story of Terry Gilliam's scuttled Don Quixote adaptation. That film included massive amounts of on-set footage before that production was shut down, and nothing like that is available here. As a result, Pavich must mostly rely on a talking-head format augmented by those animations. Lucky for him, his primary talking head is Jodorowsky himself, as lively and frenzied as a hyperactive 12-year-old despite now being well into his 80s.

Many of his recruits, interviewed here, tell of being won over by the director's passion and talent as a storyteller in relating his vision for Dune. The sum total of their adulation depicts the Dune pre-production as a kind of cult, with Jodorowsky as the prophet warrior king mesmerizing anyone who heard the sound of his voice.

Listening to him now, it's hard not to fall into his thrall, even given the self-mythologizing, the obvious ego and a couple of profoundly unfortunate metaphors he employs — one comparing the creative process to rape, another the studio system to slavery.

For those with any interest in cult cinema or just the bizarre behind-the-scenes stories of any film production, Jodorowsky's Dune is a fascinating document of one of the most legendary films ever not made. If its ambitions never quite match those of its subject, that can be excused; no one else's vision could ever hope to equal the fevered, monumental dreams of Jodorowsky.