Accessibility links
A Teen On The Hunt, And Maybe In Over Her Head In It Felt Like Love, 14-year-old Lila goes looking for love and sex over the course of a hot Brooklyn summer. Critic Ella Taylor says the film is painfully observant. (Recommended) 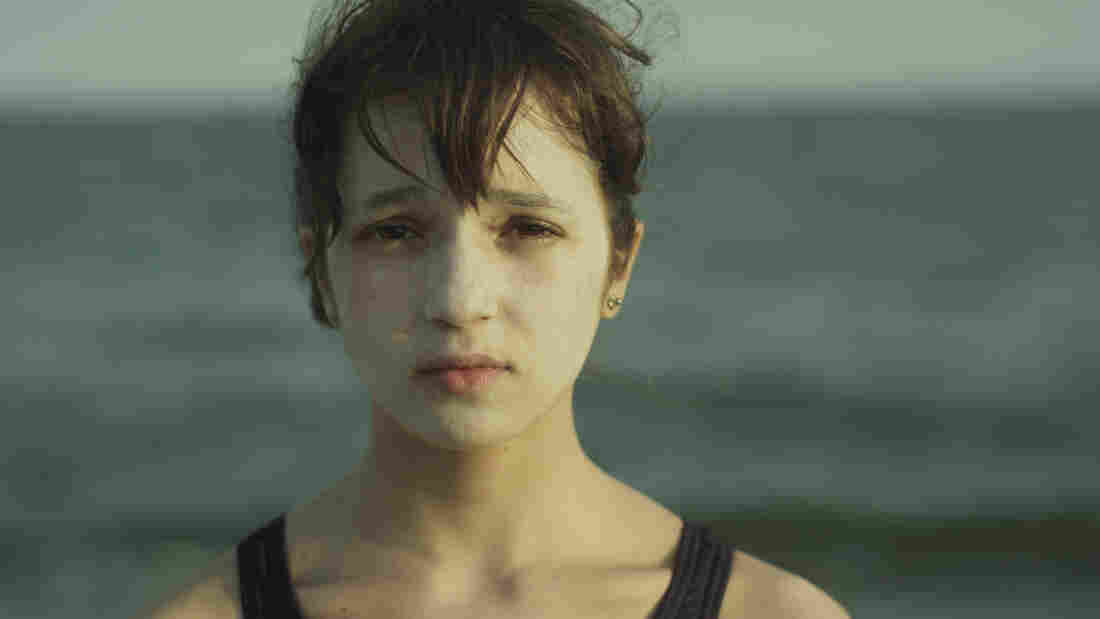 Feared and feared for in equal measure, today's teenagers are prisoners of pop and punditry. Branded as bad seeds or delicate flowers, they take shape in the public mind as either neglected or overprotected by their parents, abused by or abusive of the Internet, oversexed or terrified of sex. Is coming of age the pits, or what?

Filmmaker Eliza Hittman doesn't shy away from such labels, or from the extremity of the teen years. But she wants to get inside the subjective particularities of the experience, as felt by a fragile 14-year-old. At once delicate and scarily candid, It Felt Like Love tracks Lila (Gina Piersanti) through a hot South Brooklyn summer, with only the beach and a low-rent amusement park for recreation.

Looking for love and sex, Lila gloms on to Sammy (Ronen Rubinstein), a tough older boy she meets on the beach, placing herself at risk in ways that are every parent's nightmare.

Or would be if Lila had a functioning parent. Motherless and without illusions about the support she can expect from her feckless, slightly creepy father (Kevin Anthony Ryan), Lila tags along with her far more experienced friend Chiara (Giovanna Salimeni) and her pushy but uncommitted boyfriend (Jesse Cordasco).

Made for a song and partly shot in Hittman's parents' basement, with a cast picked up mostly from local dance studios, high schools, and the beach, this atmospheric, almost painfully observant film debut captures an adolescent's languorously unstructured summer. Ambient noise — the roar of the ocean, the rustle of a paper bag, the pop of a beer can judiciously boosted with explicit rap lyrics — underscore both the torpor of Lila's environment and the intensity with which she longs to make something happen.

Resolutely descriptive, It Felt Like Love doesn't exactly have a plot, which feels absolutely right for a film whose elliptical yet intensely focused visual style seem to flow directly from Lila's consciousness. Weirdly angled close-ups — a male armpit here, a flat young belly there — are intercut with the pale oval of Lila's fine-featured face as she tries to replicate the brash theatrics of the only role models she has.

But the more Lila copies, the more out of sync and heartbreakingly unconvincing she grows, until at last, having dragged Chiara to a party neither of them is ready for, she enters the danger zone.

Torn between lust and love, desperate to enter a world whose rules she can't fully decipher, Lila does make things happen, few of them good. Hittman contemplates the tyranny of peers — and the double standards of boys who want to play the field, but want their sex partners to be virgins. But she demonizes no one, not even Sammy, who's trapped between his sense of honor and an archaic need to run with the pack.

The remedy is girl power, but only in the movie's striking final ritual — a dance that's equal parts kabuki and raunch — does it come home to us that Lila's destiny is still up for grabs. (Recommended)