Accessibility links
Movie Review - 'Maladies' - It's Either Art Or A Fire Hose, And We're Calling It The Latter Critic Ella Taylor says Maladies — a preening art film about a mentally ill ex-actor — is a prime specimen of the blossoming sub-genre VBMWJFA, or Very Boring Movie With James Franco Attached.

It's Either Art Or A Fire Hose, And We're Calling It The Latter

It's Either Art Or A Fire Hose, And We're Calling It The Latter 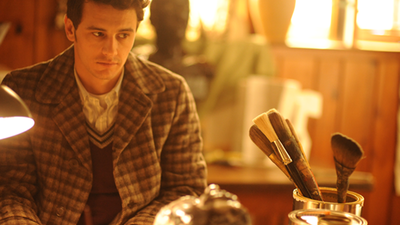 James (James Franco) is a retired actor who may or may not be suffering from a degenerative mental illness in Maladies, an art film from New York painter, sculptor and filmmaker Carter. Tribeca Films hide caption

Many years ago, the great and grumpy British TV writer Dennis Potter (The Singing Detective, Pennies From Heaven) rounded a corner in a prominent New York art museum and stood wondering whether the coiled thingy on the wall in front of him was a work of art or an emergency fire hose.

I wish it were possible to harbor such doubts about Maladies, a prime specimen of that blossoming new sub-genre, the VBMWJFA, or Very Boring Movie With James Franco Attached. Of late the talented actor-director-poet-performance artist — or whatever role he's inhabiting on a given day — goes gaily about the world bestowing cachet, along with his lovely mug, on projects that range from the intriguing to the wildly undeserving. If the word "art" pops up somewhere, Franco's in.

Take his association with John Carter, a New York painter, sculptor and filmmaker who goes only by Carter (twee alert!), and whose clever idea it was to have Franco appear as a version of himself on the soap opera General Hospital. Together the two made Carter's 2008 film Erased James Franco, which I have not seen but which has Franco re-enacting his past film roles.

Nor will I see it, if it's anything like Maladies, in which Franco plays the artfully referential "James," who is, guess what, a former soap-opera star struggling to retool himself as a writer. Either that, or he has a degenerative mental illness, or both. James listens to telephone dial tones for comfort; there's a voice inside his head passing vaguely knowing comment; and his being an artist and all, it doesn't take much to reduce him to a gibbering wreck .

Other voices belong to James's saucer-eyed sister (Fallon Goodson), who wears ill-fitting wigs and likes to deface the Rorschach-like paintings of Catherine (Catherine Keener), the artist and patron who gives the siblings both shelter and acerbic encouragement. Mercifully there's at least one non-artist, a closeted and cravatted gay man (this being 1963) named Delmar (David Strathairn), who spends his time watching James's old TV shows and gazing mournfully upon the object of his affection.

I get it now: subversive reversals! This being the '60s, It's only a matter of time before the cops, or shall we call them agents of cultural repression, show up to cart poor James off to jail or the funny farm or whatever.

And lest we presume even a smidgen of retrograde realism, Jim Jones and the People's Temple (1978) gets shoveled in for the fun of it.

In interview after interview Carter has said that he's "interested in" performance, identity transformation and emotional disintegration among creative types. But he never says what about those things interests him, or how. Maladies, too, just sits there, throwing out empty references without growing a single one into something resembling an idea.

"I just did it the way I know how to do it," Carter kindly explained to an interviewer, "which was a pile of notes put together to make a film out of." Having seen the pile, I believe him.

Along with the rest of the movie's fine cast, Franco presumably believes he is in the presence of art. Me, I know a fire hose when I see one.